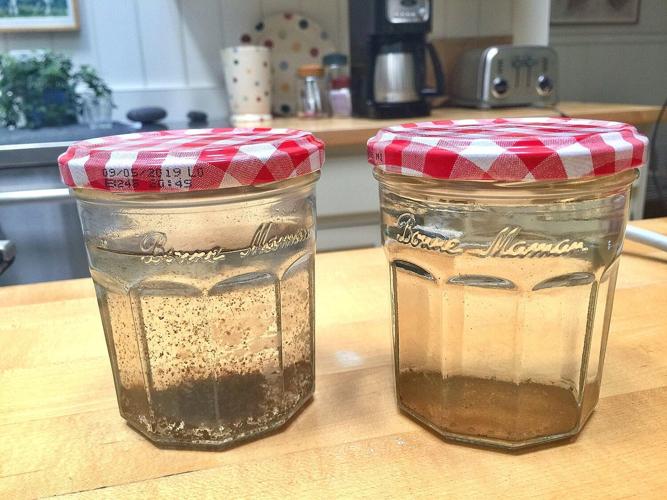 Brown matter is evident in jars of tap water filled at different times Monday in Jane Wright's home on Park Street in Housatonic. 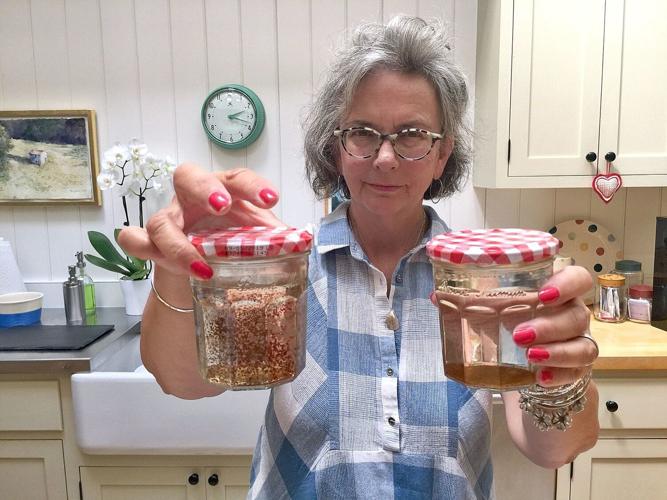 Jane Wright of Park Street in Housatonic said she is spending about $100 a month on spring water and her monthly water bill combined. Wright said water color has been a long-standing problem since she moved here 13 years ago.

Brown matter is evident in jars of tap water filled at different times Monday in Jane Wright's home on Park Street in Housatonic.

Jane Wright of Park Street in Housatonic said she is spending about $100 a month on spring water and her monthly water bill combined. Wright said water color has been a long-standing problem since she moved here 13 years ago.

GREAT BARRINGTON — David Guenette spent "hours upon hours" Wednesday running his faucets to try to clear the brown water flowing out of them.

"This time it was exceptionally dark," Guenette said.

Guenette, who posted a photo of coffee-colored water on Facebook, is not alone. He and residents of Housatonic have endured another spell of "roily" water — water discolored in shades ranging from yellow to brown because of rust sediment churned up in century-old cast-iron water mains.

Warmer water and a state-mandated increase in chlorine added as a disinfectant increase oxidation and worsen the corrosion that pulls rust out of the pipes, according to James Mercer, treasurer and co-owner of Housatonic Water Works. The company serves water customers in the area.

What made sediment levels even worse this week was a system flush that ended Tuesday, churning up more sediment before washing it out, Mercer said.

The water might not look safe to drink, but it is, according to the state Department of Environmental Protection. The DEP conducted another test Monday and found the water free of bacteria and in compliance with state standards, Mercer said.

The DEP, which sent two engineers to town Thursday to investigate the issue, has ordered tests every other week. The company will post those results and other information on its website.

Town Manager Jennifer Tabakin said the town is having conversations with its own Department of Health, the state Department of Public Utilities and the water works to deal with the problem and make sure the water remains safe.

"These issues haven't been ignored," Tabakin said. "We don't have regulatory oversight of the water system, but we've done the best we can do to advocate for our community."

Rust that flakes off from inside water mains is not considered a health threat. Rust is classified by the federal Environmental Protection Agency as a "nuisance chemical," for which a fix is optional.

But some residents still don't trust the water, even out of a filter, and are buying bottled water instead.

Jane Wright of Park Street, holding up two specimens of rusty water she collected Monday, said she is spending about $100 a month on spring water and her monthly water bill combined.

While the water appeared to be much clearer Thursday, as observed by The Eagle, Wright said water color has been a long-standing problem since she moved here 13 years ago.

"We had really dirty water leading up to this," she said of the most recent spell of system turbulence.

Like Wright, water customers also cite costs and harm to their property values.

They don't want to drink it, cook with it, bathe in it, or do laundry with it. Some say the rust is staining their toilets and has, over the years, corroded their faucets. Many are buying bottled water by the case and lots of filters — all while continuing to pay their monthly water bill.

"We're going through filters like it's going out of style," said Alan Soto of Linda Lane.

Soto said a Sears double filtration filter that lasts two years costs $40 a pop, and he has to buy four per year. He and his wife, Beverly Nourse, are buying bottled water for drinking and cooking — that costs about $22 per month. Those expenses come on top of their approximately $50-per-month water bill, they say.

Housatonic Water Works serves 840 customers with water from the Long Pond Reservoir, pumped through lines that date to the 1880s, when they served the mills. About 80 percent of the mains are over 100 years old.

Because the water works is a private company, government grants aren't available, according to Mercer, who co-owns the company with his father, Frederick Mercer.

Solving this problem would require 17 miles of water main replacements that would send water rates sky high, to a level the state Department of Public Utilities is unlikely to allow, James Mercer said at a recent meeting.

At that session, he answered questions and tried to reassure angry and worried customers that their water is safe to drink.

Some water works customers are pushing for an overhaul of the system, and think they might have a solution: for the town, in some way, to take over the company, or create an alternative.

The idea raises questions about how any change might unfold.

"If the town took it over, everyone would be on the hook," he said, noting that Great Barrington customers also pay water costs on their property tax bills, unlike Housatonic water customers.

Atwood said the town could form a water district or enterprise fund for Housatonic customers.

"There are things that can be done," he said.

State legislators agree with those who say a long-range plan is needed — and soon.

State Sen. Adam Hinds, D-Pittsfield, said a constituent sent him "disturbing images" of the water. He is considering what can be done at the state level.

"It's concerning to hear money as an obstacle when we're discussing water," he said.

State Rep. William "Smitty" Pignatelli, D-Lenox, said that when he was a Lenox town official, the town took over the Lenox Dale water system, which had been run by the town of Lee, despite Lenox Dale being part of Lenox.

"We did an analysis, we developed a plan ... that's what [Great Barrington] should really do," he said.

Pignatelli suggested that the town allocate money to study what an overhaul would entail, and possibly collaborate with the water works.

He said he had spoken to DEP officials and he understands the water is safe. But he also knows the problem.

Should residents have to pay for water that is discolored? The town says no; the company says yes. Meanwhile, the company will test a filtration system it hopes will fix the problem.