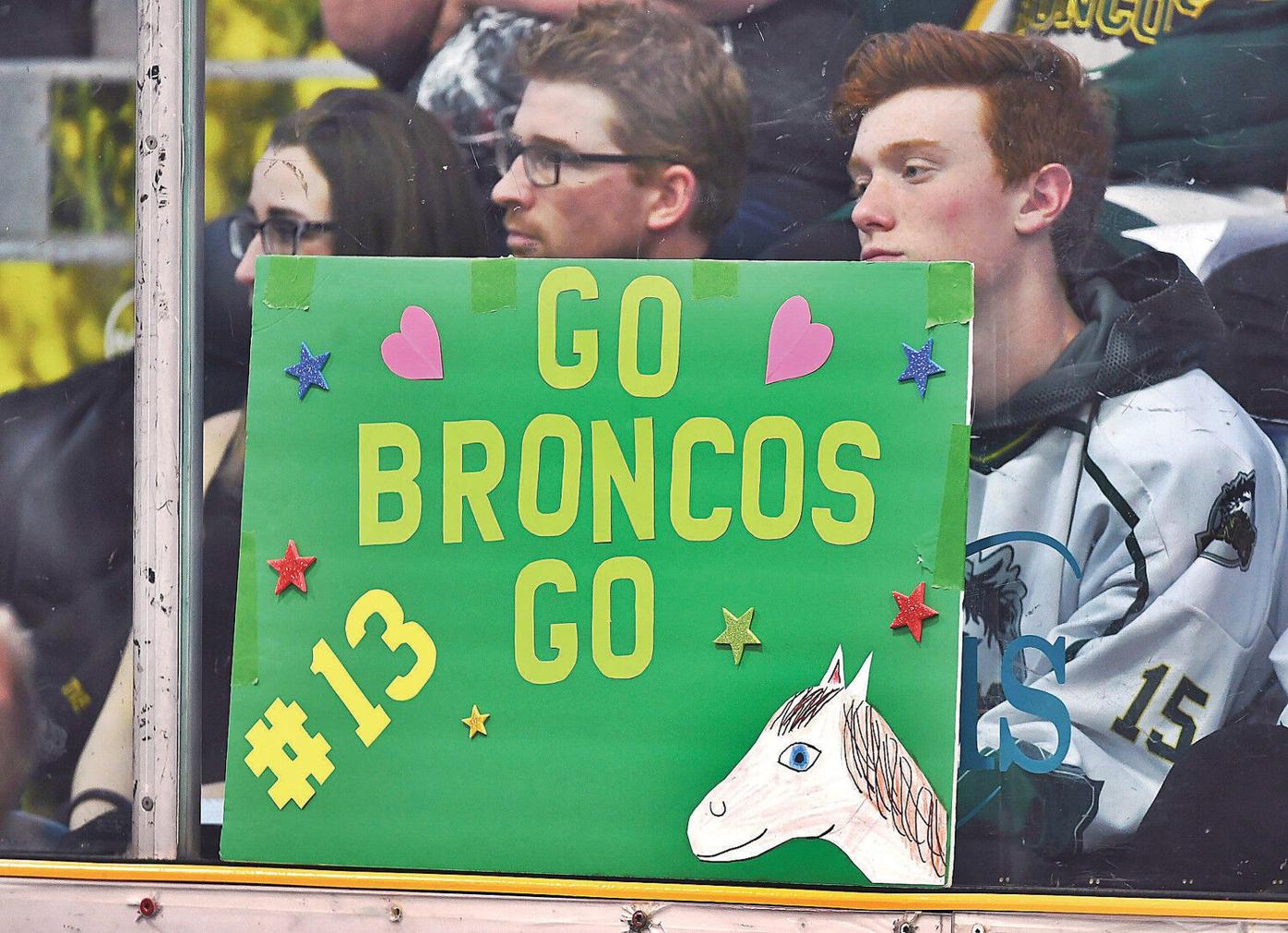 Mourners attend a vigil at the Elgar Petersen Arena, home of the Humboldt Broncos, to honor the victims of Friday's fatal bus accident, in Humboldt, Saskatchewan, Sunday. 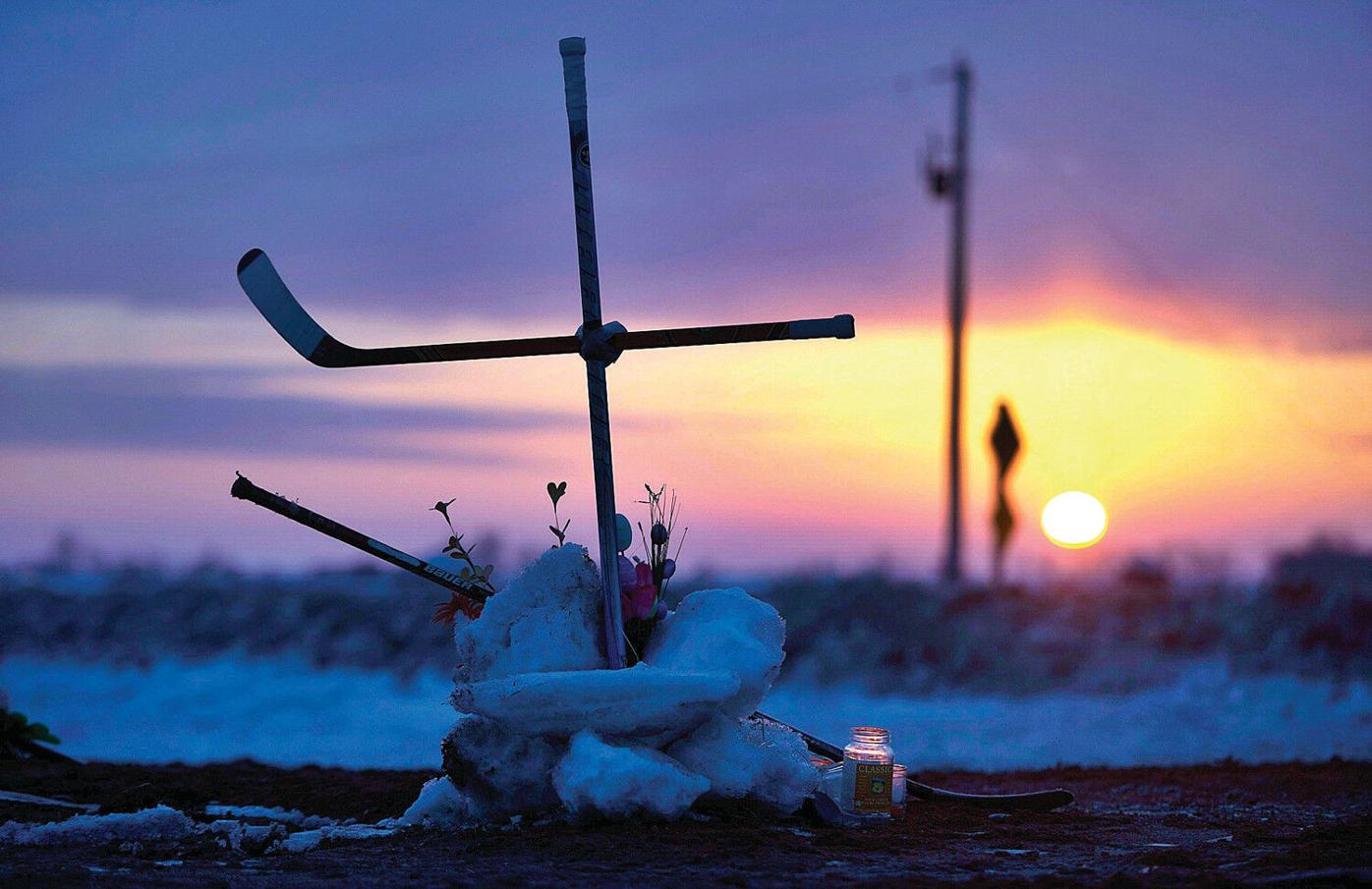 The sun rises as a cross made out of hockey sticks is seen at a makeshift memorial at the intersection of of a fatal bus crash near Tisdale, Saskatchewan, Tuesday. A bus carrying the Humboldt Broncos hockey team crashed into a truck killing several and injuring others last Friday.

Mourners attend a vigil at the Elgar Petersen Arena, home of the Humboldt Broncos, to honor the victims of Friday's fatal bus accident, in Humboldt, Saskatchewan, Sunday.

The sun rises as a cross made out of hockey sticks is seen at a makeshift memorial at the intersection of of a fatal bus crash near Tisdale, Saskatchewan, Tuesday. A bus carrying the Humboldt Broncos hockey team crashed into a truck killing several and injuring others last Friday.

WILLIAMSTOWN — The bus accident in Humboldt, Saskatchewan, that claimed 15 lives continues to reverberate within the hockey community.

It has been five days since the accident, but the members of that close-knit community continue to feel the sadness.

"Being a hockey player, you wish there was something you could do," Williams College hockey player David Italiano said. "Even for another team, if you know someone in the hockey world, you obviously want to help them out. There's not much we can do except pray for their families.

"I know the guys in our house here on Spring Street, we all put our sticks outside last night. We saw that was going on in social media, 'Sticks out for Humboldt.'"

Friday, a bus carrying the Humboldt Broncos Junior A hockey team was struck by a semi tractor-trailer. Fifteen people were killed — players and coaches — while 14 others were injured.

"It's something that is terrible to have happen, and it strikes you as something that hits close to home. I'm from Canada," C.J. Shugart said. "But even more than that, the whole hockey community thinks that could have been us at any time.

"You just kind of count your blessings and appreciate what you have going for you."

In the days since the accident, Humboldt has been the center of the hockey universe. Players from the NHL to bantams have expressed their condolences, and funds have been raised to help the families of those involved.

There were five Canadian-born players on the 2017-18 Williams team. Shugart and fellow senior Italiano both are from Toronto, Ontario. Two others, forward Roberto Cellini and defenseman Keanu Hilaire, grew up in Montreal, Quebec, while goaltender Michael Pinios is from Laval, Quebec, a Montreal suburb.

Pinios played for the Smiths Falls Bears in the Junior A Ontario Junior Hockey League.

"I played a 62-game season for two years in a row. With the exhibition games and playoff games, it was over 150 games," Pinios said. "We had half on our bus ride. We were traveling three or four hours. It's so sad, because you're just traveling to a game. You're in a zone, not paying attention to the road. I can't imagine what those families are going through."

The Broncos play in the Saskatchewan Junior Hockey League, considered a Junior A level league. That is the second highest level of junior amateur hockey in Canada. Players travel from all over the Canadian province to play for one of 12 teams in the league. Players live with families and got to school while they play hockey.

Perhaps the best known team in the league is the Flin Flon (Manitoba) Bombers, who count Hockey Hall of Famer Bobby Clarke among its alumni.

"For me, having played four years of Junior A, having had that at such an important point in my life and one of the reasons why I'm here now," Shugart said, "it obviously hits pretty close to home."

Pinios said that this tragedy is compounded by the fact that Humboldt is such a small town.

"I was in a town, Smith Falls, Ontario, where there were 9,000 people, and hockey is one of the biggest things there. The community really rallies around the hockey team and what they do," he said. "With a town of 9,000 people, I think on average, we'd have 1,400 people come to our Friday night games. Almost a quarter of the town would come to the games.

"A town like Humboldt, with 6,000 people, hockey is such a big part of that town and to see it happen, is really sad."

"Some of the best times we have are on those buses. Some of the bus rides on the way to a big game are always going to stick with us," said Italiano. "Those guys didn't get to their game. Unfortunately, that's a memory the rest of the hockey world is going to have to latch on to, because they didn't get to play their game."