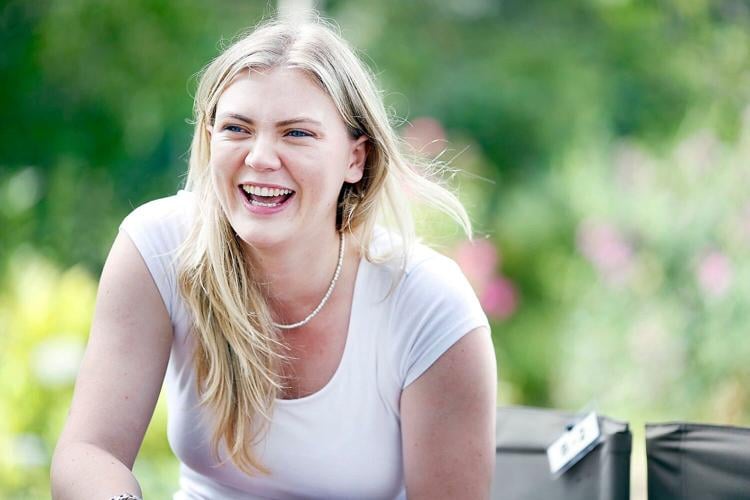 Ella Loudon commutes to the Berkshires from Hudson, N.Y. 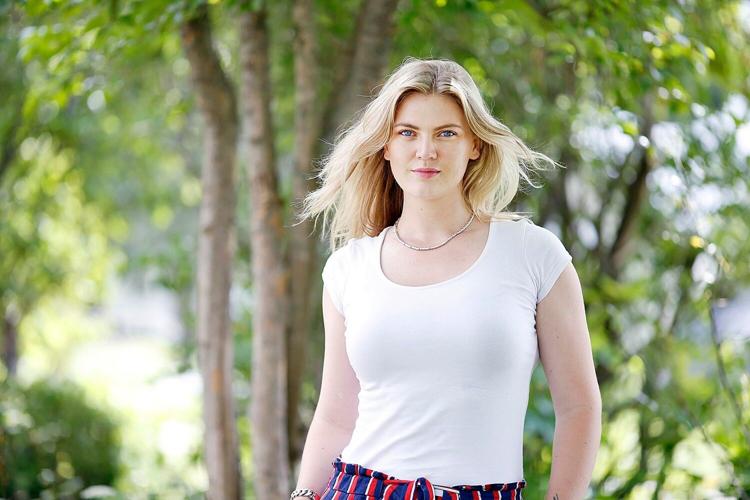 Actress Ella Loudon's father is Daniel Craig and her mother is Fiona Loudon. 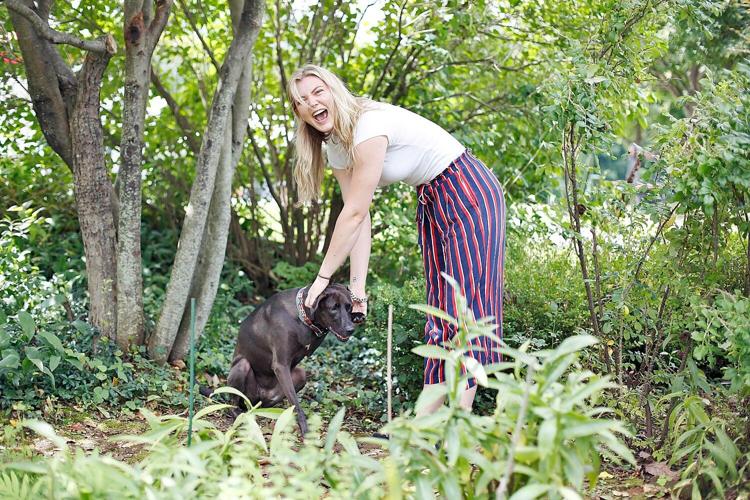 Actress Ella Loudon and her dog Chica at Shakespeare & Company in Lenox, where Loudon is currently performing in "As You Like It." 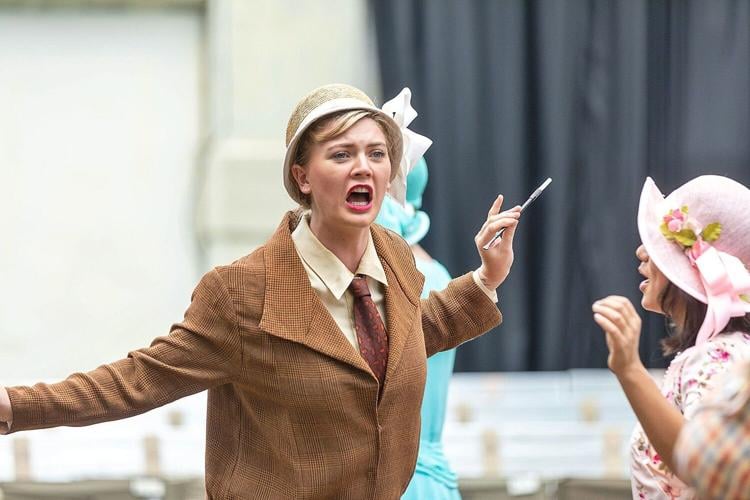 Ella Loudon plays Phoebe in Shakespeare & Company's "As You Like It."

Ella Loudon commutes to the Berkshires from Hudson, N.Y.

Actress Ella Loudon's father is Daniel Craig and her mother is Fiona Loudon.

Actress Ella Loudon and her dog Chica at Shakespeare & Company in Lenox, where Loudon is currently performing in "As You Like It."

Ella Loudon plays Phoebe in Shakespeare & Company's "As You Like It."

LENOX — When your father is James Bond and your mother and stepmother are both actresses, pursuing a thespian career can be a tad daunting.

"There's sort of that thing where I wish I was really good at science, but I was bloody awful," Ella Loudon said on a recent Friday morning.

The 25-year-old daughter of Daniel Craig and Fiona Loudon, and stepdaughter of Rachel Weisz, was lounging in one of the seats at Shakespeare & Company's Roman Garden Theatre, the outdoor venue where "As You Like It" is currently being staged through Sept. 2. At the time, Loudon was preparing for her role as Phoebe while wrapping up her run as Banquo in the Lenox troupe's latest production of "Macbeth." She had started learning her lines for "As You Like It" shortly after the opening of "Macbeth."

"It's amazing how the brain can naturally compartmentalize, but you're also talking to someone who really struggles with learning lines," said Loudon, who is dyslexic. "There are some people who can just get it. It's not an excuse, but it's something I struggle with."

She tries to compensate for this shortcoming by thoroughly researching her characters' emotional and physical states before rehearsals begin. In Melia Bensussen's instrospective version of "Macbeth," Loudon examined Banquo's spirituality.

"I wanted to see what his religion was, what his belief system was, because he experiences the spirits, too," Loudon said.

For "As You Like It," Loudon focused on this Allyn Burrows-directed production's 1920s setting.

"Women didn't cross their legs. They always sat to the side, but it was still legs closed," Loudon said, posing. She also said that women often leaned their shoulders forward.

"Thinking like that, that's going to help me get into character," she said.

In the play, Phoebe resists love at points.

"How can I still bring the strength of a woman during a time [when] women were seen and not heard still?" Loudon said of her challenge.

She wasn't planning to be docile.

"My Phoebe has a voice, and she's going to be bloody heard," she said.

That has often been Loudon's approach to roles since her earliest days onstage. Though she was born in Edinburgh, Scotland, Loudon was largely raised in London. At 11, she starred in a school production of the gangster comedy "Bugsy Malone," a musical which, she said, "really no Americans know! [It] really drives me insane because I think it's amazing. And, ironically, it's set in the '20s like 'As You Like It.' It should be seen. I think everyone should watch it."

After that experience, she quickly fell for theater.

"You go on and there's this ultimate feeling of, for myself, of being completely free," she said.

When asked if her parents ever tried to talk her out of acting, Loudon said that they didn't do so directly, but they did try to shift her attention elsewhere.

"Focus on your education more," she recalled them imparting.

For a time, however, Loudon's acting ambitions were derailed by something far more serious than parental guidance. After moving to the U.S. and dropping out of New York University (where she was studying acting) during her freshman year, Loudon was experiencing depression.

"You might have the most wonderful people around you and who love you dearly, but you're still blinded to that," she said. "I was completely blinded to that. [I] felt so very alone and isolated myself, but my family noticed, and they took action for me in getting me help."

Loudon came to the Berkshires for that help and felt better, though depression is still something she must manage.

"I don't think it ever disappears," she said.

During her worst mental state, Loudon didn't want to act.

"Partially, the reason was because I think you can only be a good actor if you really know who you are and can completely stay true to yourself, and if my head was feeling the way it was, how could I be a quality actor? So, I didn't want to," she said.

That changed when she met Shakespeare & Company Director of Education Kevin Coleman, who persuaded her to participate in "The Master and Margarita" production at Stockbridge's Riggs Theatre 37 in 2014.

"I did three pretty kick-ass plays [there]," Loudon said. The others were "The Patsy" and "The King Lear Project."

"She complimented me. ... It's quite exciting when Tina compliments you," Loudon said.

"I needed that at the time," Loudon said.

The program was invaluable.

"I've gone to a few drama schools; I may have dropped out of a couple and enjoyed a few. This is the only place I've had the best training and a clear understanding of what I'm doing. The people are amazing. ... Teacher-student; it feels like everyone's a teacher and everyone's a student," she said.

During the program's scene-sharing final day, actor Nigel Gore delivered the news that Loudon was in consideration for the role of Miranda in "The Tempest" at the Roman Garden Theatre that summer.

"Nigel and I are best mates now, but I remember first meeting him, and he said to me, 'You better do a good job out there for [your] final scene because you're being thought of for Miranda.' Just about to go onstage. I was about to do the tent scene from 'Julius Caesar,' which is a really frickin' tough scene, and you get this bloody Englishman coming up to you and [saying], 'You better do a bloody good job,' and you're like, 'F--- off.' That's all I wanted to say to him," she said.

She subsequently auditioned for the part and learned that she had been picked for the role.

"I was jumping for joy," she said.

She and Gore, who played Prospero, clicked onstage.

"We're both feisty. We get at each other's throats in a way that people quite get nervous if we're arguing; we're never arguing," Loudon said.

Gore (Duke Senior/Duke Frederick) and Loudon are once again taking the stage together in "As You Like It." It's Loudon's fourth Shakespeare & Company production. (She also played Guiderius in "Cymbeline" last summer.)

Loudon commutes to the Lenox stage from her home in Hudson, N.Y, where she lives with her dog, Chica. Between last summer and this one, she traveled extensively but also performed in the opera, "The Mother of Us All," at Hudson Hall. She bartends from time to time in Hudson; she used to do so at Shakespeare & Company before she began its training program.

"It was really fun. I got to know all of the actors. There'd be a lot of late-night talks," she said.

Bartending helps her acting, she said, because it requires, "watching people and meeting so many different characters and learning to have to change how you are as a person to each person."

For now, she's content living among Hudson's many characters.

"It's just enough for me. It's not claustrophobic like the City. We have the best Halloween parties in Hudson. I rent my costumes from here!" she said, referring to Shakespeare & Company.

"My ultimate dream is kind of a cliche: I just want to own my own home, have chickens, have someone I love and then, at some point, have kids," she said.

Acting is certainly part of that dream, too. More screen time could be in her future; she has appeared in a short called "Maneater" and a feature called "Trauma Is a Time Machine." But she still loves the stage.

"The theater is brilliant because you have to be in the moment, and you have no idea what's going to happen," she said.

She's not sure yet where she'll be a year from now, but Loudon said that fame won't drive her moves to come.

"I really just want to be respected as a quality actress and do really good quality work," she said.