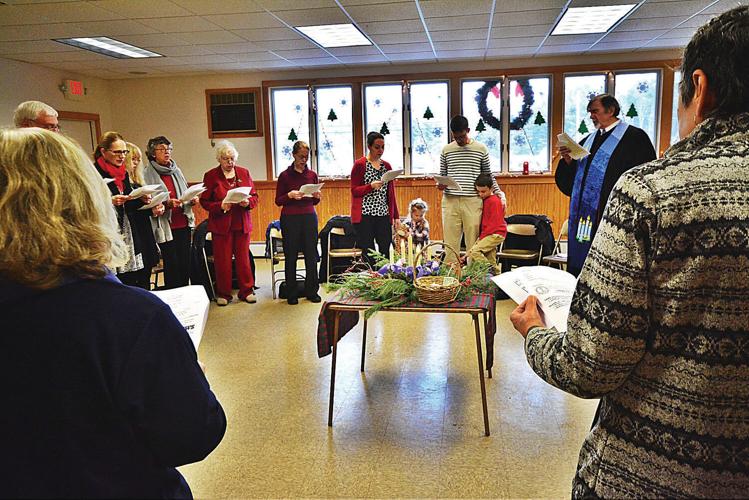 Fire destroyed the Canaan Congregational Church in Canaan, N.Y., in November. The congregation has been meeting for Sunday services in the Canaan Protective Fire Company since the fire. This Sunday was no exception. 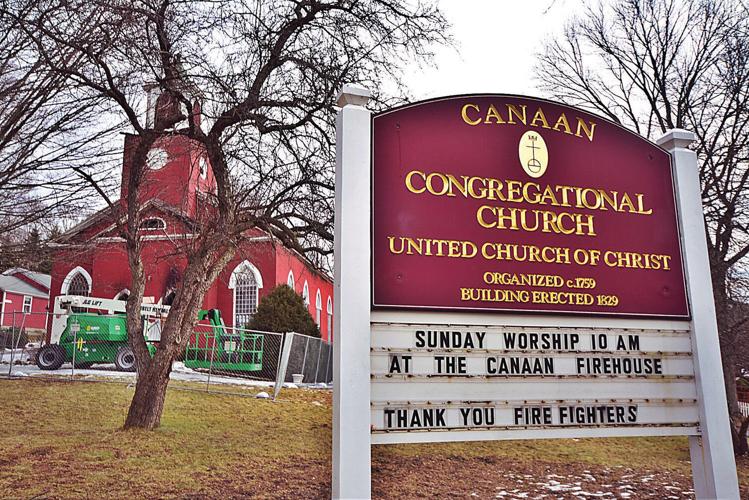 Fire destroyed the Canaan Congregational Church in Canaan, N.Y., in November. The congregation has been meeting for Sunday services in the Canaan Protective Fire Company since the fire. This Sunday was no exception.

CANAAN, N.Y. — Here on a Sunday morning, on Route 295 just west of Queechy Lake, cars fill the parking lot around the yellow firehouse of the Canaan Protective Fire Company.

The sight is typical of one of the firefighters' famed fundraisers, the "Belly Bustin' Breakfasts," but the aroma of bacon and pancakes is notably absent.

Instead, the volunteers are feeding souls, not stomachs.

Inside the firehouse, in the meeting room, where yellow caution tape is the garland of a Christmas tree, two dozen people sit in a circle, heads bowed in quiet reflection. On a small folding table, an evergreen wreath encircles five advent candles. A well-rehearsed choir of six sings beside a portable keyboard, voices raised in praise.

On Nov. 6, the 1829 neoclassical red brick building that was the Canaan Congregational Church succumbed to fire, leaving worshippers without a spiritual home. But as they have discovered, a crisis brings a community closer together, and even a firehouse can serve as a sacred sanctuary.

That fateful Monday, the call came in just after 5 a.m., said the Rev. Dr. Charles Close who, in 2015, after 36 years of full-time ministering, left a congregation of 360 for this part-time parish of 43.

A neighbor smelled smoke, and, through a window, saw the old church was on fire.

Arriving quickly on the scene, Canaan Fire Chief Bill Wallace found smoke pouring out the front doors and a fiery glow inside. The blaze started in a foyer ceiling light fixture, it appears, before taking hold of the attic space and bell tower above.

From the church's structural timber to the wood finishes, "everything was fuel," Wallace said. It didn't help that the attic space was filled with flammable mouse nests and holiday decorations, including a wooden creche scene.

The mighty 17-by-9-inch timbers, which had been drying there for nearly 200 years, "went up very nicely," added Close.

Flames traveled up a crack in the southeast corner support and hollowed the whole thing out. It was gone, he said. Luckily, it didn't fall down.

As the tower was enclosed and inaccessible, fire crews broke in through the roof and eaves, removing bricks and fascia boards. With no trapped lives in peril, Wallace didn't jeopardize firefighters by sending them inside.

"The fear was the big heavy bell on top of the tower," he said. "If it had been compromised, we didn't want people under it."

Canaan has no ladder truck, so the nearby Red Rock and East Chatham fire departments sent theirs to help fight the blaze. Thanks to a mutual aid agreement, all three fire companies plus Lebanon Valley were dispatched automatically to the fire call.

With no municipal fire hydrants, Wallace triggered a battalion tanker response, summoning equipment from Niverville, Chatham and Spencertown to pump water from nearby ponds and keep two, 2,000-gallon portable storage pools filled at the fire site.

In all, 10 communities from New York and neighboring Richmond, Mass., responded with fire trucks, ambulances and support vehicles. Wallace estimated more than 100 firefighters tackled the blaze. All were volunteers, since Columbia County has no paid fire departments.

It took six hours to completely extinguish the fire.

The church's front end was burned out, Close said. Residents of the green house next door were evacuated to a motel, for fear the compromised bell tower might collapse on their home.

With $1 million in coverage, the insurance company will likely declare a total loss, Close explained. Some artifacts and furniture were saved, but most of the church, including the pews and a 100-year-old Steinway piano, sustained major smoke and water damage.

While the tower was severely burned, "the bell is still up there," he said, "and we might be able to save the belfry." For now, steel beams replace the burnt wooden supports "until we decide what to do with it."

Following the fire, a meeting was held at Canaan Town Hall.

"It was our church family and people from the community and from my denomination," said Close. "We talked about our feelings. It was cathartic for a lot of people. We're Yankees, we don't pour out our emotions — and some people couldn't talk because they would cry."

Members of the Canaan Fire Department also met and voted to offer the use of their firehouse for the congregation's Sunday services for as long as was needed.

"It was unanimous; everyone in the fire department agreed," Wallace said.

The offer was delivered during the Town Hall gathering.

"And we took it immediately," said Close. "In a crisis, you take care of immediate stuff first, then you transition into the long haul."

The congregation is still coming to terms with the loss of their beloved church.

For Dorothy Dooren, a 40-year member, the church was an oasis, somewhere to "find peace in a troubled world," she said. "But the church is people, not a building."

"It was shocking, a severe loss," said Patricia Wallender, who joined the church a decade ago while living in New Lebanon, N.Y., and who now commutes from Pittsfield, Mass.

Still, she said, "it seems like we're closer now than we were before."

Terese Platten has attended the church for 20 years.

"Our daughter was baptized there," Platten said. "We're a small congregation and a very close-knit community. It was like looking at your home burning."

Driving by the building makes her sad, Platten said. She added, "But a lot of us are also looking at the opportunities, too."

Following the Sunday service, Close reported the bell tower has been stabilized, debris-filled dumpsters removed and a fence installed, "so we're safe and secure for now."

And next door to the charred church, two children threw snowballs in their yard, happy to be back home in familiar surroundings in time for the holidays.

Word of the loss traveled quickly and far, said Close. He has received notes and emails from neighbors and people all over the country who grew up in the church, offering help including building use, sharing worship with other congregations, hymnals, monetary donations — even several organs.

The greatest need, however, is time and patience, he said.

"It's hard to see, you want to help right now, but this is ongoing."

Attendance at Sunday services has increased slightly since the fire.

"I think it takes a crisis to get people remembering their roots," Close said.

An architect by profession — he became a firefighter 20 years ago after building an addition to the firehouse — he has offered to help determine the best course of action, either restoring the church to its former state or demolishing it and building anew, just as early settlers did when the original church on the site burned down nearly 200 years ago.

"It really could go either way," Wallace said.

On Sunday, the congregation held its traditional candle-lit Christmas Eve service of lessons and carols at St. Peter's Presbyterian Church in Spencertown, and continues to worship on Sundays at the firehouse.

Church business goes on as usual — gathering food for the hungry, sending cards to shut-ins, providing holiday toys and gift cards for a local family.

Whatever the future of the red brick building holds, their faith in community is stronger than ever, uplifted by the outpouring of support from friends, neighbors and firefighters alike.