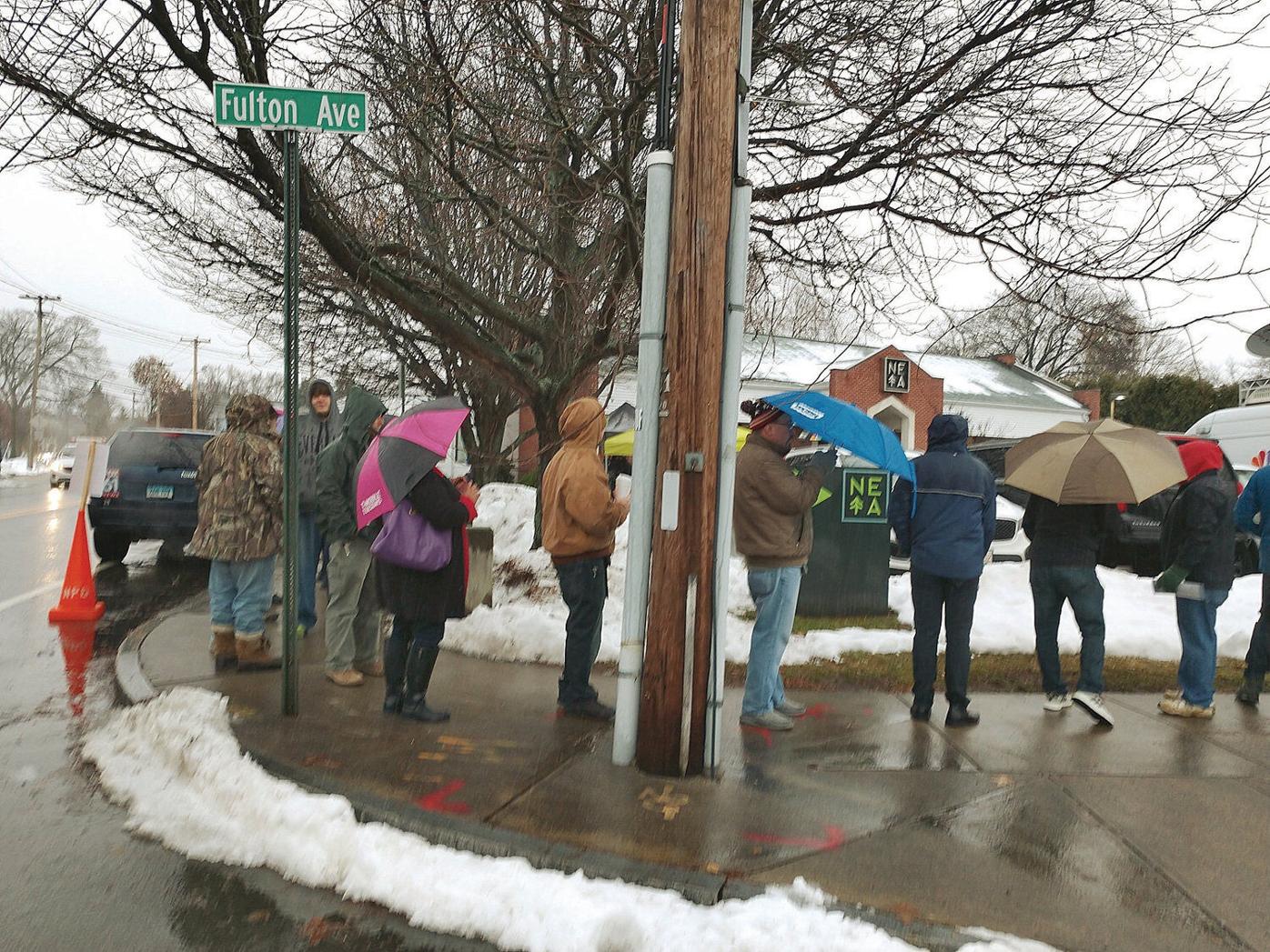 The line stretched around the block at New England Treatment Access, with customers waiting to be some of the first Massachusetts residents to legally buy marijuana in the Bay State. Kristin Palpini - The Berkshire Eagle 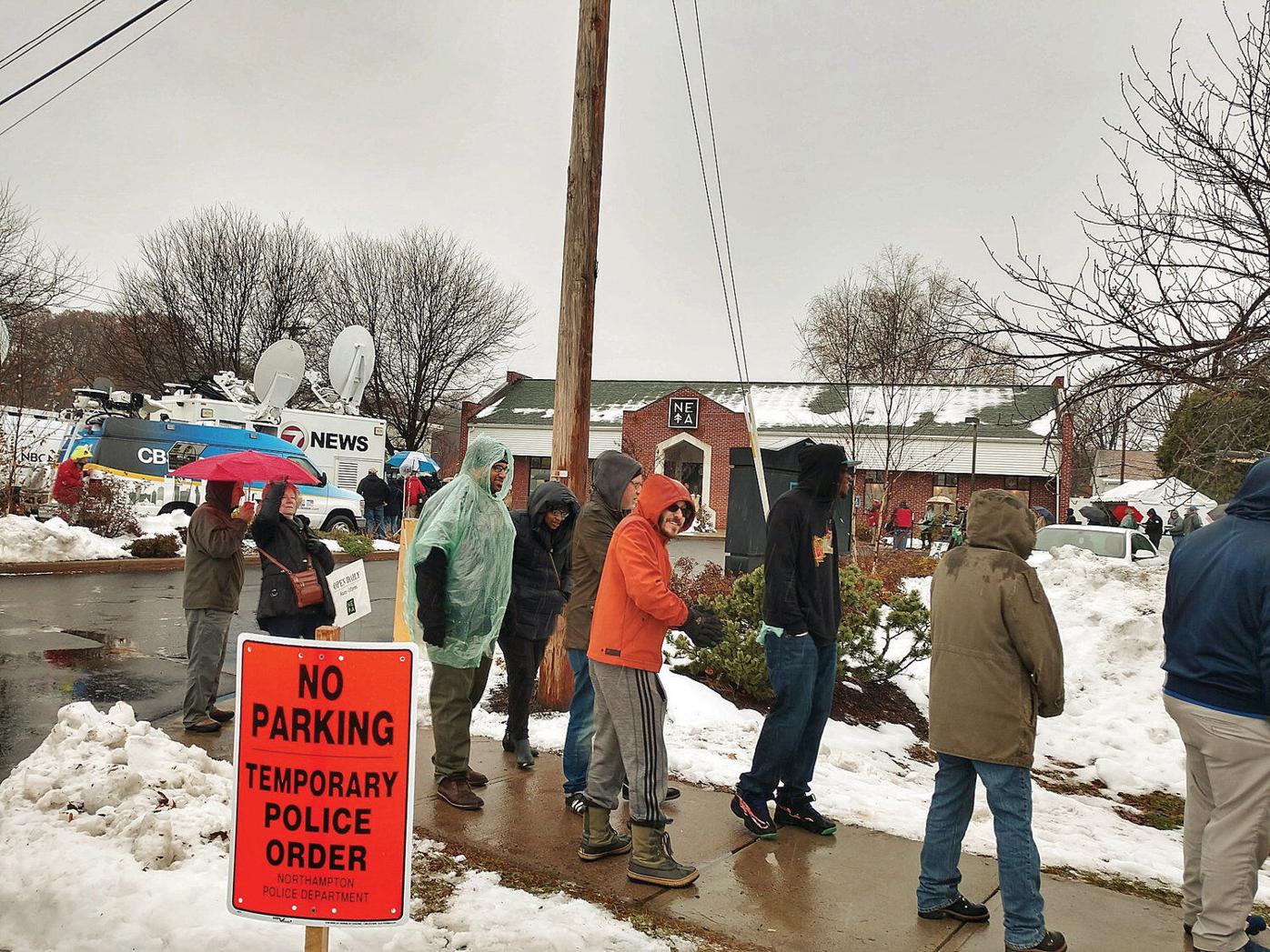 Customers stand outside New England Treatment Access in Northampton on Tuesday, waiting to be some of the first Massachusetts residents to legally buy marijuana in the Bay State. Kristin Palpini - The Berkshire Eagle

The line stretched around the block at New England Treatment Access, with customers waiting to be some of the first Massachusetts residents to legally buy marijuana in the Bay State. Kristin Palpini - The Berkshire Eagle

Customers stand outside New England Treatment Access in Northampton on Tuesday, waiting to be some of the first Massachusetts residents to legally buy marijuana in the Bay State. Kristin Palpini - The Berkshire Eagle

NORTHAMPTON — Among the first people in line to buy marijuana today were three Pittsfield men: one wearing a dreadlock wig, another in a Grateful Dead T-shirt and a third in an orange hoodie and Carhartt pants.

They got in line at 2:30 a.m. outside New England Treatment Access, or NETA.

By 8 a.m., when the store was slated to open, there were about 400 people in a line that stretched around the building and down Wright Avenue, but the doors remained closed because of an unexpected delay, staff told those in line. The line began moving around 8:30 a.m.

Through an arrangement with NETA, Northampton Mayor David Narkewicz was the first customer.

"I heard this was a hoppin' breakfast spot," the man with the wig joked, noting that NETA staff provided people in line with muffins, coffee, ponchos, umbrellas, handwarmers and, for a man in a foot cast, a chair.

In the Berkshires, eight retail establishments are awaiting approval by the Cannabis Control Commission; four have already received provisional approval and hope to get their final license in the coming weeks.

The Pittsfield men, who all live on Onota Lake, but declined to provide their names over concerns their employers could learn of their purchases, said they came to the shop to buy processed pot products — just about anything besides the traditional marijuana flower.

"We're here for the wax, the high-test, the shatter, lotions, capsules, whatever we can get our grubby mitts on," one said, listing various forms of marijuana concentrates.

Today, people waited for hours in a constant drizzle of wet snow and sleet. Puddles consumed parts of the sidewalk and a few people slipped in the slushy snow banks along the road. There was a fog in the air — which had nothing to do with weed — and police were directing traffic.

People with nearby businesses stood in their private parking lots, turning motorists away. Cars filled the streets but didn't back up traffic much. It's not clear what started a short ditty of dueling car horns by the Pleasant Street roundabout at 9:20-ish a.m., but there were a lot of people from out of town with one eye the road and the other scanning for a parking spot.

The guys from Pittsfield weren't the only Berkshire County residents in line today.

Lyla Roybal, of North Adams, arrived to line up with a few friends around 8 a.m. Roybal, like several other people interviewed at the opening, said she wanted to be part of this historic moment.

"I'm not waking up for weed that early," her friend said.

"This is an important moment for Massachusetts," Roybal said.

She referred to California, which in 1996 became the first U.S. state to legalize medical marijuana. States where adults can buy and use weed include: Colorado, Oregon, Washington and Alaska. Massachusetts "needed to do this, too," she said. "It's progress."

While marijuana is being legalized for medical and recreational purposes by states throughout the U.S., the drug is still illegal under federal law.

Elsewhere in line, there was a couple from Pittsfield that stayed overnight at one of the hotels on Conz Street across from NETA. The woman said she had no idea the start of recreational cannabis sales would be such an event, while her partner chuckled.

People came from much farther away than the Berkshires to buy weed today — giving an indication that marijuana tourism is already sprouting in Massachusetts. In line was a man who drove for two and a half days, from New Mexico to Massachusetts, to legally purchase weed. He said he has visited Colorado to buy marijuana more than a dozen times since the state's first recreational pot shop opened in 2014.

A man named Tom, from Kentucky, drove 13 hours to go to NETA. Tom studied the store's paper menu while waiting — a wine-list looking sheet with descriptions of available marijuana strains in flower, edibles, concentrates and other products. While anyone over the age of 21 can purchase marijuana in Massachusetts, there are limits on how much an individual may possess. NETA has capped recreational sales at one ounce per person, per visit.

Attorney Richard "Dick" Evans of Northampton didn't have far to travel to be at the event. A member of the legal committee for NORML, a national pro-marijuana advocacy group, Evans said he was celebrating the long journey to legal sales with today's purchase.

"Here we are; it's better late than never," Evans said, noting that voters approved recreational marijuana in 2016.

"This puts the final nail in the coffin of marijuana prohibition in Massachusetts," Evans said. "May it rest in peace."

Once the doors opened to the public at NETA, the line moved at an efficient clip. It took the Pittsfield men, who had about 50 people standing in line in front of them, under a half an hour to get in and out of the store — exiting with crisp white NETA paper bags in hand.

"I got it," said the man in the dreadlock wig — he bought some Super Lemon Haze oil for a vaporizer.

"And now," he said without breaking stride, "it's time to go to our private place."