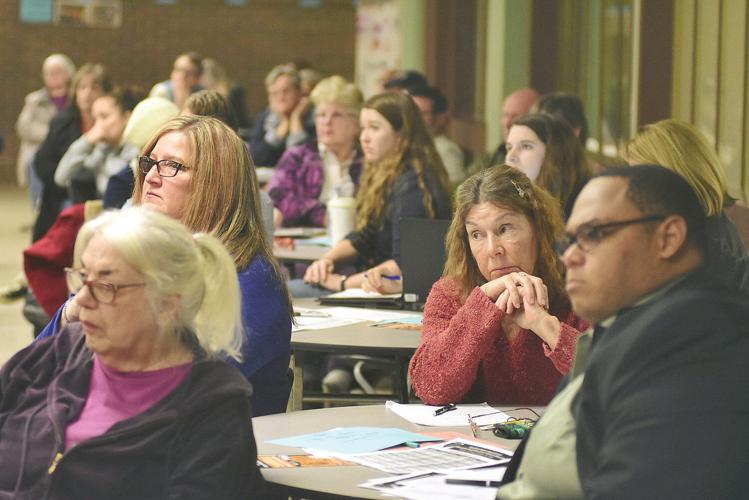 Westside residents listen during a community meeting this week at Conte Community School regarding violence in their neighborhood. Some community leaders say there are steps that residents can take to help keep themselves and their neighbors safer. 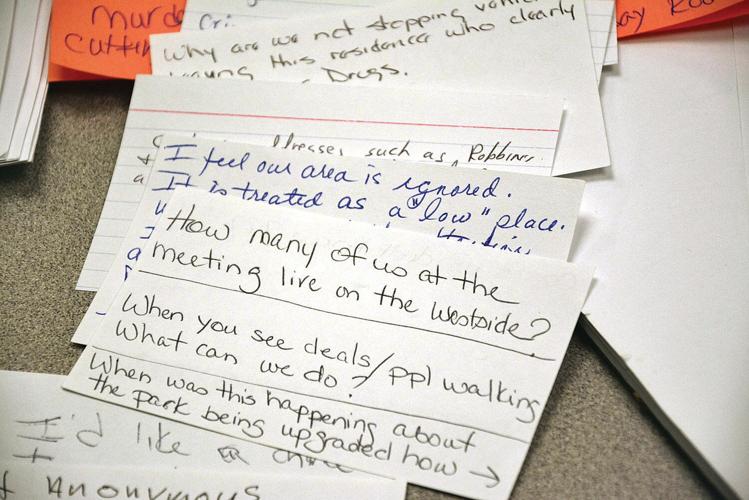 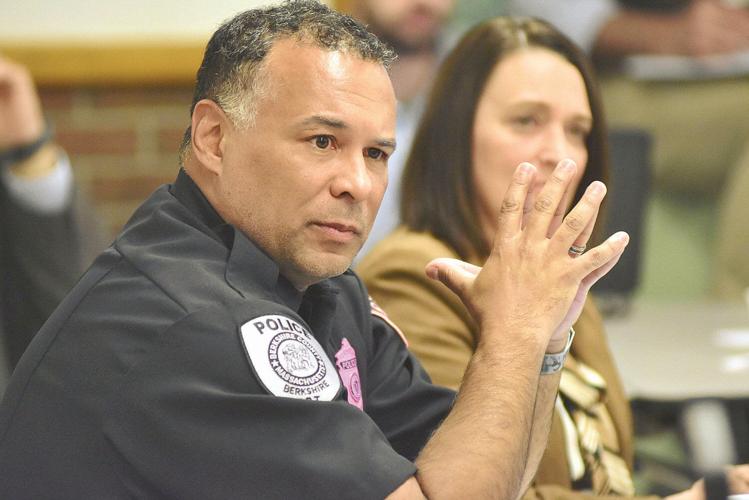 Westside residents listen during a community meeting this week at Conte Community School regarding violence in their neighborhood. Some community leaders say there are steps that residents can take to help keep themselves and their neighbors safer.

PITTSFIELD — Improving safety in Pittsfield isn't simply a police matter; residents can take steps to discourage crime in their neighborhoods, too, some community leaders said in the weeks that followed the fatal stabbing of a 34-year-old city man.

"It's counterproductive for people to sit in their homes and say, `What are you going to do for us?" said Kate Lauzon, chairwoman of the Morningside Neighborhood Initiative. "I don't mean take on police work. I mean, just go out and be in the community."

On Oct. 15, William Catalano died of stab wounds he suffered in an altercation at 219 Robbins Ave., a home where police have been called to 59 times since the beginning of 2017. Three people are facing murder charges in the case.

Residents of the area have said that criminal activity is so prominent that they avoid being outside, which has prompted an exchange of ideas on what can be done. Several community meetings, one in the Westside and another at Working Cities on Wednesday, formed to address the issue.

Lauzon repeatedly has said that crime is not a "Westside issue," it is citywide.

"People are so afraid and want to stay in their house," she said. "People are starting to close off to the rest of the community."

But that response is inefficient, she said. Residents should be hosting and attending community events, jogging or dog-walking in groups, and being active to show potential criminals that if they are up to something, they will be seen, she said. When community events are held, there should be food and free child care offered to break down barriers for people who wish to attend, she said.

At the Working Cities meeting Wednesday, where residents gather monthly to collaborate on community events and initiatives, 15 residents, including Lauzon, discussed potential efforts to combat crime.

Carolyn Valli, executive director of the county's Habitat for Humanity, whose office is on the Westside, wrote the ideas on an easel pad for the group.

The group considered launching a "Safety Task Force" with engaged representatives from the community, city officials and member of the Police Department to meet regularly. They also considered organizing groups to walk together on nights when there are city events, and identifying streets that aren't well-lit and other environmental factors that affect safety.

"Tucker Park is used as a hangout for [drug] deals, and it's not well-lit," Linda Kelley, chairwoman of the Westside Initiative, said in a conference call with Valli.

"We want to make sure that it isn't so bright that we're shining into bedrooms," Valli said, vowing to be "deliberate" about light use.

Lighting dark streets is an example of something that could be achieved through the potential task force with city officials, they said.

Another goal expressed at the Working Cities event was to improve the lines of communication between residents, police and the city.

Whenever there are serious violent crimes, residents blame police or judges for not getting known criminals off the streets.

"I think that everyday citizens are frustrated with what they see going on and don't fully understand that police have their hands tied," Valli said.

To mitigate that, those in the criminal justice system should host community forums at which residentsshare their concerns and lawyers and police officers can explain what they can realistically do and the barriers they face, the group concluded.

Valli and Kelley took note of the suggestions made at the Westside meeting and Working Cities and organized them in short-term and long-term goals. They hope to keep in contact with residents who provided their email so the initiatives get rolling.

But former local NAACP President Will Singleton, who long has been a proponent of police being assigned to a walking beat in some neighborhoods, is concerned that some community initiatives might be putting the burden on residents instead of the city.

When Singleton had proposed the walking beat in the Westside and Morningside neighborhoods, it was shot down, with police officials noting that the department has neither the budget nor the manpower for it. As a compromise, Police Chief Michael Wynn assigned every officer to 15-minute "park and walk" assignments during their shifts. Some also have been assigned to bicycle duty.

Singleton feels that neither of those would be as effective as a full-time walking beat in building trust in communities where residents are skeptical of reporting crimes.

As for the community taking steps to organize safety initiatives, Singleton said he is concerned that if it goes too far, residents might take what they see as justice into their own hands.

"I'm just not crazy about the idea, I'm really not," he said. "OK, if they do want to walk in groups of two or three as we build that trust, but again, that's putting the burden on the residents. We don't want residents to become some sort of vigilante outfit."

Civilians, he said, shouldn't have to alter their lives to adjust to the crime around them. If officers build trust with residents by being visible in neighborhoods, residents will feel more comfortable reporting crimes and feel safer outside, he said.

Pittsfield Police Lt. Gary Traversa said he can understand Singleton's concern, but he stressed that the department relies on civilians to come forward with information when they have it.

"We certainly want to have people who are willing to provide us information and be our eyes and ears," he said in a phone interview. "We're not looking for them to try and handle issues on their own."

If residents see something suspicious or have information about a crime, they can always report it by phone, or through the Pittsfield Police phone app, which allows them to text anonymously.

"They are anonymous, but we do have an opportunity to text back those people, he said. "I just did this yesterday, asking them if they're willing to provide a phone number or email."

A lot of police work is focused on prevention, Traversa said, but if community members are looking for ways to reduce victimization, the best things they can do is avoid criminal behavior or the known areas where it occurs, he said.

Stranger crime still is relatively rare in Pittsfield, and most victims know their aggressor, he said.

Choosing acquaintances carefully and getting to know them well before spending time alone together is one way to keep safe, he said.

While it is unusual to be assaulted at random, it does happen on occasion, so pedestrians should stay clear of dark streets at night, and walk together when it is necessary.

There is "strength in numbers," he said.

Lauzon suggested that the city look at incentive programs for homeowners who opt to put them on their home.

"It's certainly helpful for police to have access to privately owned video surveillance," Traversa said. "I think anybody who has surveillance, as long as it's working, is protecting themselves and also helping out the community, assuming they are willing to provide access if an investigation in the area is necessary."