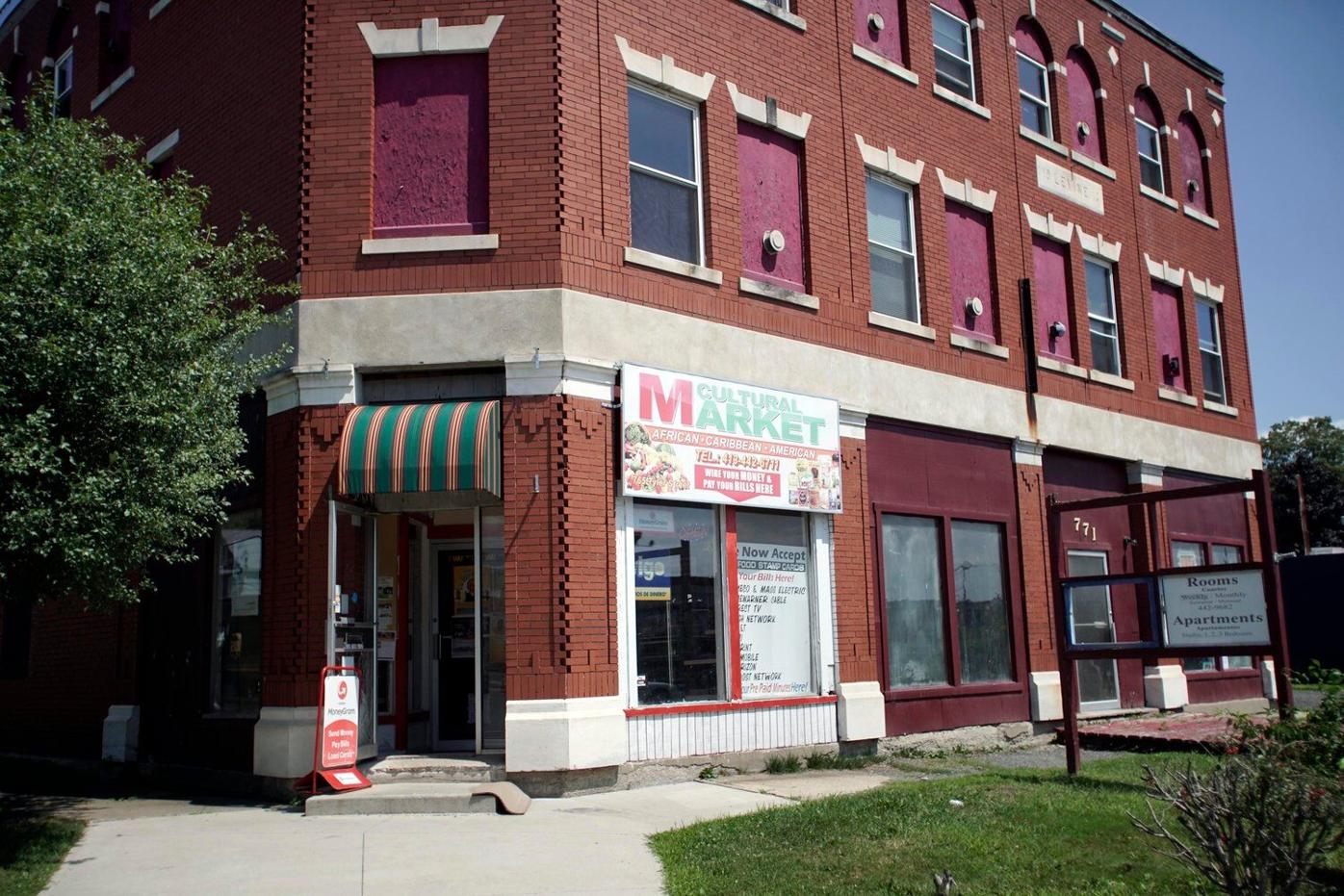 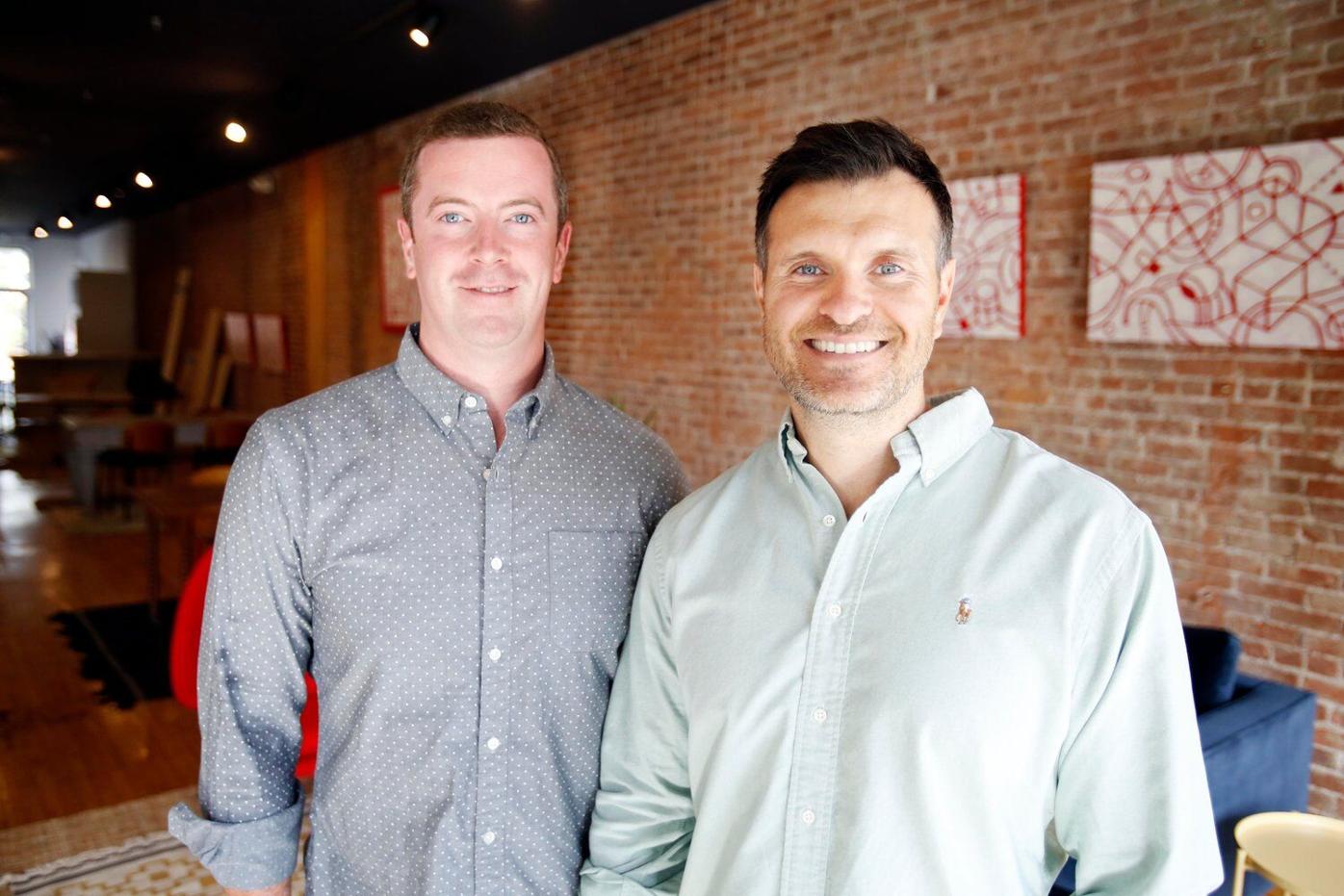 Framework on North Street is a co-working space developed by Tim Burke, left, and Scott Moraes. 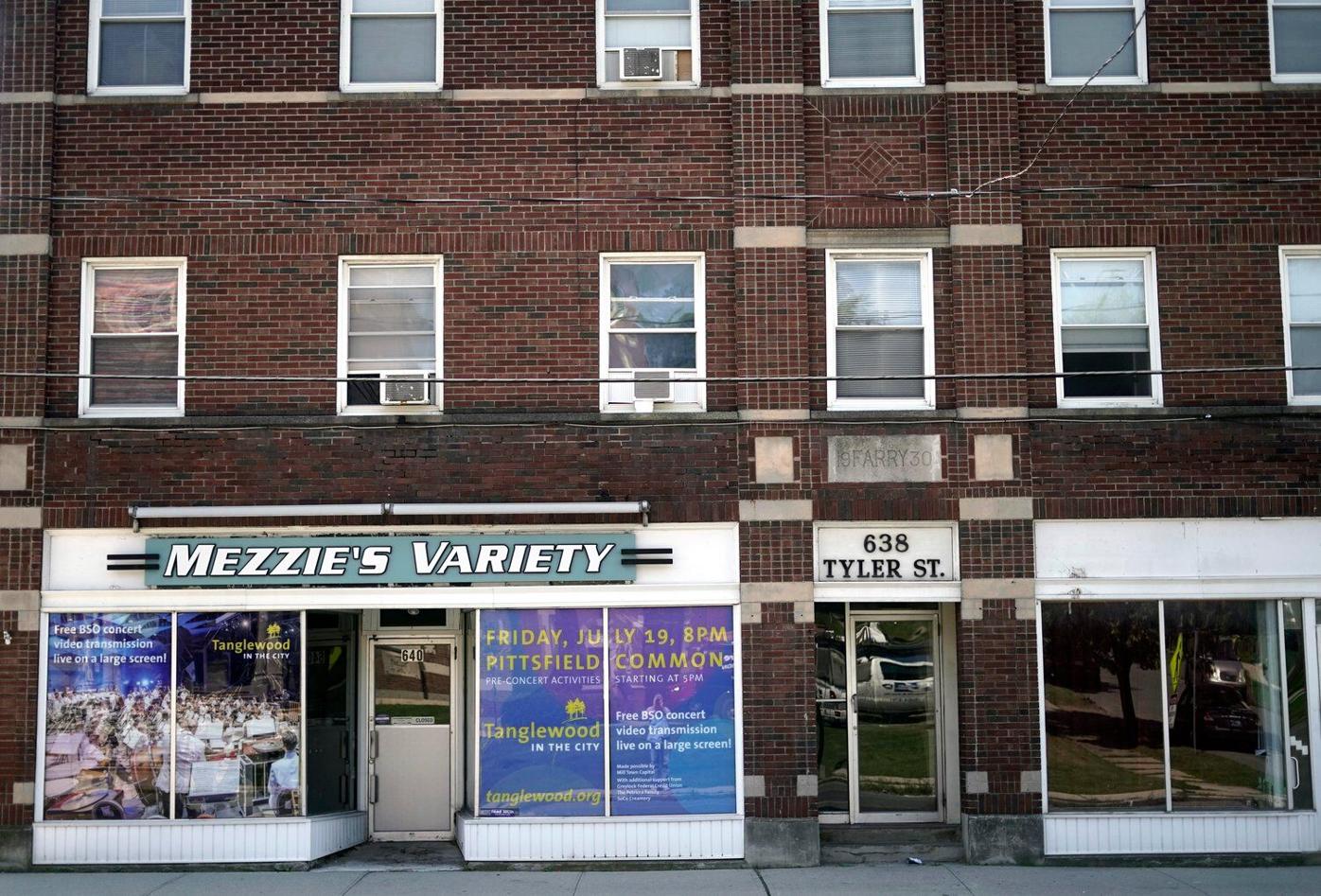 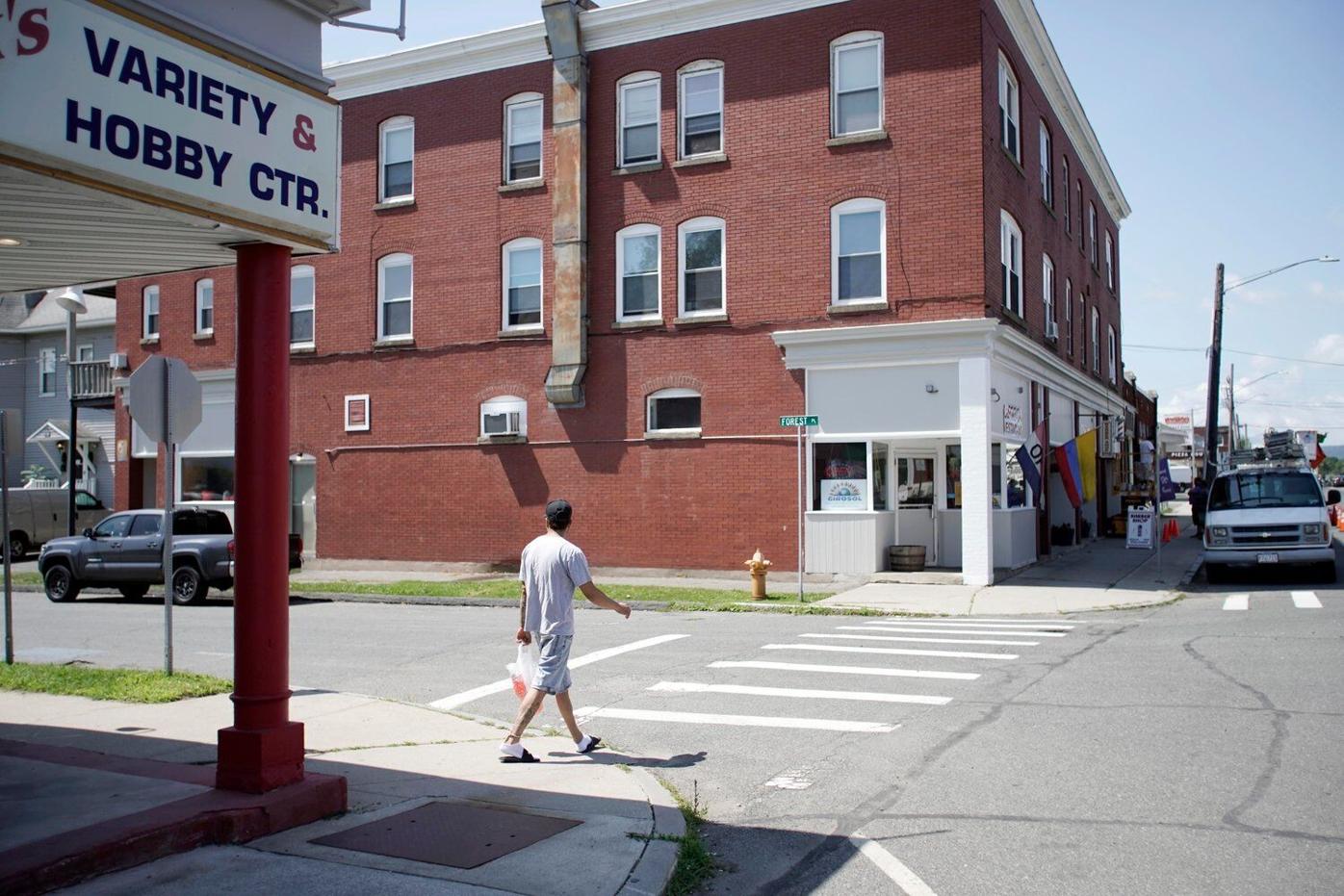 BEN GARVER - THE BERKSHIRE EAGLEA pedestrian looks before crossing the street Wednesday near the La Fogata Building on Tyler Street, one of at least 22 downtown Pittsfield properties acquired by Mill Town Capital over the last year. 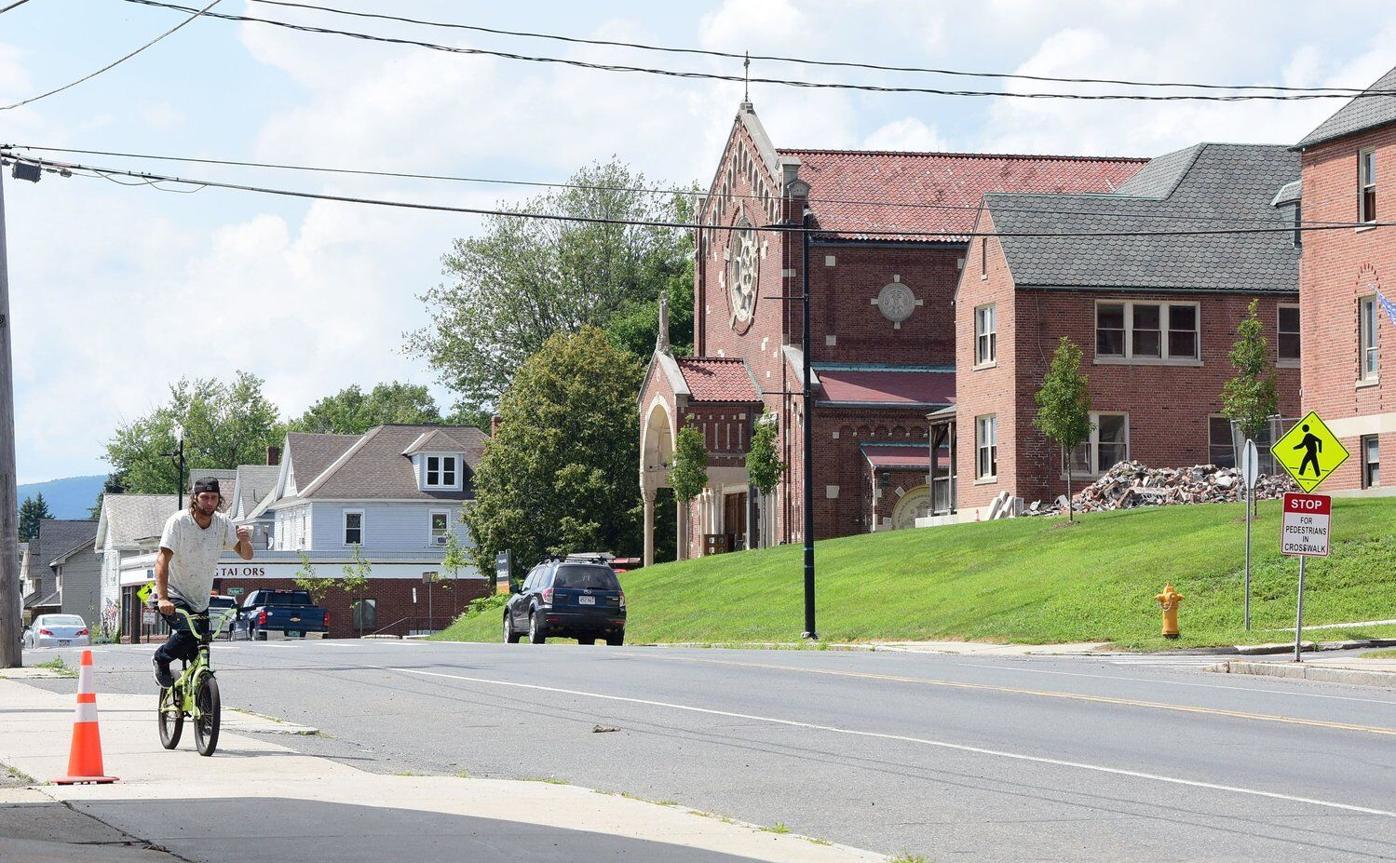 GILLIAN JONES - THE BERKSHIRE EAGLE Mill Town Capital is Tyler Street's most prolific new property owner. Over the past year, the investment firm has bought up more than a dozen properties in the area surrounding the Morningstar redevelopment project, for which the firm also kicked in investment dollars.

Framework on North Street is a co-working space developed by Tim Burke, left, and Scott Moraes.

BEN GARVER - THE BERKSHIRE EAGLEA pedestrian looks before crossing the street Wednesday near the La Fogata Building on Tyler Street, one of at least 22 downtown Pittsfield properties acquired by Mill Town Capital over the last year.

GILLIAN JONES - THE BERKSHIRE EAGLE Mill Town Capital is Tyler Street's most prolific new property owner. Over the past year, the investment firm has bought up more than a dozen properties in the area surrounding the Morningstar redevelopment project, for which the firm also kicked in investment dollars.

PITTSFIELD — A contractor chipped stale paint from the façade above La Fogata Restaurante on a recent afternoon.

Slivers of color gathered on the sidewalk in front of the building at 758-770 Tyler St., now owned by Mill Town Capital, an investment firm that aims to boost the Berkshires.

The commercial building is one of at least 22 buildings the firm scooped up over the last year in the Tyler Street area, prompting a mix of curiosity and skepticism from the neighborhood.

In the meantime, contractors milled in and out of the old St. Mary the Morning Star Church, which will soon house 29 market-rate apartments — a project for which Mill Town is a key investor. City leaders say the housing complex will transform Tyler Street.

And Mill Town Capital is working to achieve just that by spending more than $3.6 million on 22 properties, some of them vacant and tired, and cleaning them up.

The old Cooke and Burnell building at 741 Tyler St. stands among the firm's most recent acquisitions.

Tim Burke, Mill Town's managing director, said the company is working to spruce up its new holdings, like the mossy house next to Patriot Car Wash. The home will soon be remade into apartments, he said.

Mill Town's real estate investments dovetail with the impending apartment complex, which will be called Morningstar. David Carver, the developer behind the old St. Mary's $7 million remake, said market-rate apartments at the property could be ready by the end of this year. Tyler Street has a lot of potential, Carver said.

"I just have this feeling that over the next 10 years Tyler Street is going to become a very interesting, successful street," he said.

The city's largest employers — Berkshire Health Systems and General Dynamics — bookend the Pittsfield corridor, he said. He also noted the availability of parking and interesting architecture.

People think negatively about Tyler Street because of the vacancies, he said, but "I look at it the opposite way. Those are opportunities for growth."

"You've got a blank slate wherever there are empty buildings," he said. "You can create a new mix if you have a lot of vacancies."

In the meantime, the city plans to borrow $2 million during this fiscal year to implement a Tyler Street redesign that will cost upwards of $4 million. Also part of the borrowing plan is $1.2 million for construction at a troublesome intersection along the corridor, where Dalton and Woodlawn avenues meet Tyler Street. Survey work is expected to occur this fall, according to the city's Community Development Director Deanna Ruffer.

"We are pleased to see the focused efforts of the Tyler Street Transformative Development District result in new investments in the neighborhood and district," she said.

Mayor Linda Tyer said the street is an important one to build up.

"Tyler Street has an especially historic neighborhood," she said, calling it "the backbone of the GE family life."

And support has to come from multiple angles, she said.

Tyler Street is where her grandmother grew up, she said. She said it's important the city lean on its past as it builds its future.

"I've heard many fond memories of what it was like. And there are people in our community that remember," she said. "Our job is to build upon that so we have today's memories and the future to imagine."

Burke, Mill Town's managing director, said the firm's interest in Morningside began with the Morningstar project and grew from there.

"For that to be most successful, the neighborhood around it has to be successful as well," he said.

Beyond sprucing up the properties and being good landlords, Burke said the firm has no specific plans to redevelop any of the properties for other uses.

"Our main goal is to improve the quality and quantity of housing in the city of Pittsfield," he said.

Pittsfield lacks quality rental housing stock, he said — it's a common refrain that he hears from the city's largest employers.

The hope is to incrementally make improvements in Pittsfield. The firm has also been investing money on North Street, where they founded a co-working space and helped a new iteration of The Lantern open at one of their properties.

He said the firm is ready to similarly nurture businesses along the Tyler Street corridor, but "we're not going to insert ourselves."

"It really just depends on what the need is for that particular business," he said.

Across the board, he said, the company has been acquiring properties with the intent to improve them.

"We don't want properties that just stay vacant and are unproductive," he said.

Burke said Mill Town wants to help breathe new life into the neighborhood by filling vacant properties that they now own.

"We're going to upgrade them, make them safe, clean and advertise them to people who are interested in renting an apartment," he said. "We want people and energy and life in the neighborhood."

Mill Town was founded in 2016 by David Mixer, Burke said, and it's privately funded. Both men are from here and believe in the Berkshires.

"He's kind of a tireless advocate for the area," Burke said of Mixer. "He's trying to focus his time and his energy in a place where I think he can have a big impact."

The initial idea behind the firm was to invest in startups, but Mill Town leaders quickly realized there weren't many businesses to support. Instead, Burke said they started investing in real estate as a way to spur business growth.

"We're not purely motivated by financial returns," he said.

-In addition to making financial investments, Burke said the firm's community development arm supports Berkshire initiatives, like the creation of a turf field at Berkshire Community College and a project improving Springside Park's network of trails. This kind of financial backing amounted to more than $1 million last year, according to a project list he provided The Eagle.

Back on Tyler Street, tenants like Tyler Street Lab look to find their place within a changing landscape.

The community space launched earlier this year as a pop-up and hopes to formalize as a nonprofit dedicated to nurturing other nonprofits and nascent businesses. Mill Town owns the lab's space at 730 Tyler St. and has been charging lower rent as the group gets off the ground.

The lab collectively pays $1,800 in rent currently, but if they stay in the same space they would be asked to pay $2,400 come October.

"They really gave us a huge opportunity those first six months by offering way, way, way lower than market rent for that space," said Fran Zarubick, of Goodwill Industries, the lab's fiscal agent.

The lab's leadership group will soon present a business plan to Burke and to potential funding partners. Mill Town has broached the idea of offering  space in the Cooke and Burnell building once the lab’s lease is up, but lab leaders are concerned about what that would do to their ability to host community events.

"We have faith that they're our friends in this," said Amber MacNeil, of Ace Art.

While they figure out what's next, lab leader Terry Moore said "we're in limbo." They'd like to stay where they are.

Burke said he'd like to help the group find its way forward.

"We're open-minded to that but we want to make sure they can be successful in any space that they have," he said.

Burke said the lab is another "piece of the puzzle" for the neighborhood under development.

Across the neighborhood, Burke said the plan isn't to raise rents in any systemic way. He said he wants to see Tyler Street active and full.

"We want our places occupied," he said. "We want people walking around the neighborhood, bringing energy to it."

And Burke said he'd like to see a grocer come to the stretch.

"Even a smaller local market I think would help people," he said.

Red curtains hid the insides of another Mill Town property at 638 Tyler St., which once housed Mezzie's Variety. Advertising for the Mill Town-sponsored Tanglewood in the City event plastered the shop's former front windows.

If the company raises the rent, he said, "I'll be gone."

Still, he said he's had no problems so far. "They seem to be stepping up and keeping up with things," he said.

Most's business has lived in the space for six years, and before that he operated the lock shop for 35 years down the road, at 236 Tyler St.

He'd like to see things improve, he said, but he's skeptical.

"I've watched all of Pittsfield go downhill fast," he said.

Miguel Gomez, owner at La Fogata, said he started the restaurant about 16 years ago. The new landlord has been good to him so far, he said.

"They are improving the building," Gomez said. "If I need them, they come quickly."

The planned improvements are a good thing, he said, "but we need more."

"There's a lot of empty buildings," he said, citing the old Hess fuel station down the street.

He said he's watched the city get less safe in the 25 years that he's lived here. "We need to work on that," he said.

"I think the city is doing the right things," he said. "But they take forever."

Prospects for a Walmart Supercenter at the William Stanley Business Park had been exciting for businesses along that block, he said, "but it never happened."

Nextdoor, barber shop owner Joe Castoldi said the industrial park should have a grocery store. "This area needs that," he said.

He said he feels the movement along Tyler Street, and "I see it all as a plus."

Mick Callahan, chairman of the Pittsfield Economic Development Authority and a Tyler Street property owner, said the investments are a step in the right direction.

"I welcome the investments and the improvements that everyone is making on Tyler Street, including Mill Town," he said. "I think it's just wonderful. It's what we're all trying to do."