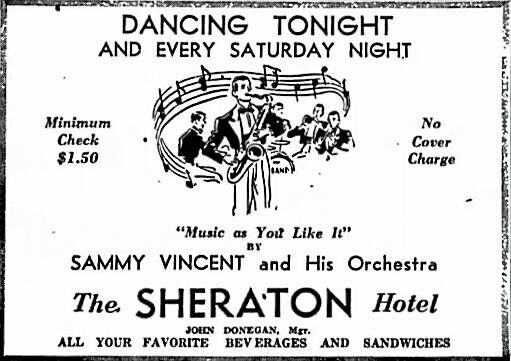 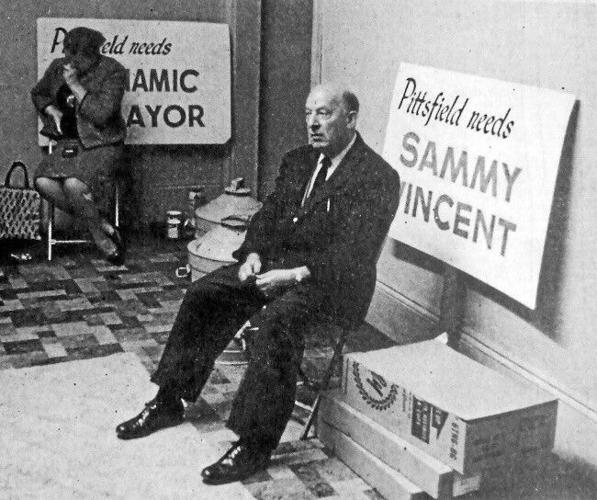 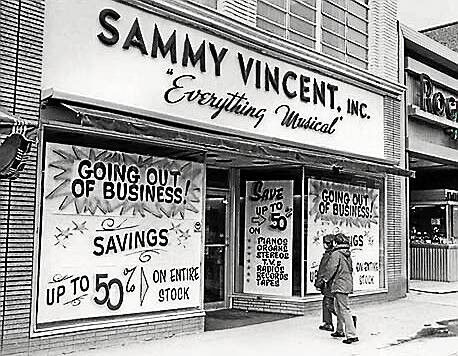 PITTSFIELD >> Salvatore Voci was a very popular man in Pittsfield in the 1950s and 1960s. However, we only knew him by his preferred name and store, Sammy Vincent's Music Store on North Street.

"Sammy" sold musical instruments, hi-fi record players, records and sheet music. But as teenagers, we were only interested in going to this store to listen to the latest music, get the free WPTR Top 31 weekly song list, and sometimes even buy a 45-RPM disc or two. (For the younger reader, a 45 was like a CD with a big hole in the center.)

In the late 1930s, Sammy was leader of one of the area's most popular groups, the Sammy Vincent Orchestra. They performed nearly every weekend through the 1940s at such locales as the Summer Street Armory, the Palace Theater, the YMCA's Oasis Club, the Wendell Sheraton Hotel and the Showboat. The band had as many as 14 musicians including vocalists and often played for crowds of more than 600 people.

Sammy had a full-time job at Holden and Stone Department Store in addition to the band. In 1943, he gave up the both roles and spent four months in the service. Following an honorable discharge, he took a foreman job at the GE and also re-built his band.

In May 1946, the 30-year-old musician realized a life-long dream. He and his wife Florence's brother, William Marco, formed a partnership to open a full-service music store. With the popularity of the band, the partners called the store the Sammy Vincent Music Store "Everything Musical," and they located at 64 West St.

By 1947, the store moved to 47 North St. with new air-conditioned listening booths for records and a television-viewing lounge. With the success of the business, Sammy gave up his band in 1950 and turned it over to musician Frankie Miller.

Although televisions were really becoming popular, the store discontinued them in 1955 to focus on "everything musical." In 1957, Sammy's expanded by moving to 33 North into the 3,000-square-foot, former Grand Union market.

Everyone seemed to know Sammy Vincent, and so he thought he'd try politics. The shopkeeper ran for mayor of Pittsfield in 1961 against incumbent Raymond Haughey, but came in third in the primary.

In 1964, Sammy decided it was time to semi-retire and at least move to a warmer climate. He sold his interest in the store to his partner's sister, Alice Clark, and moved to Boca Raton, Fla., where he built a building and opened Vincent's Music Center.

In 1973, he turned this business over to his son, Robert, and at age 59, the entrepreneur started a new career in real estate. It is no surprise: He was a top salesman.

Sammy retired in 1989 and lived until age 92, passing away in 2003. The Pittsfield store with his name remained in the Marco family until 1973 when it was bought by Richard Sukel, the owner of the Record Rack located at 73 North St.

As North Street businesses waned in the 1970s, Sukel closed Sammy Vincent's in 1975. Within months. Mr. Nathan's Shoes, a couple of doors down the street, moved into the vacant store.

Four years later, the Kennedy building, in which the store was located, burned down. Fanny Farmer's Candy Store and Roger's Jewelry were also lost in the fire. The fenced-in Kennedy Building space has been vacant and a parking area for over 35 years, except for the shut-down enclosed "walk through," which is where Salvatore "Sammy Vincent" Voci's famed shop was located for 29 years.

I sure miss getting those weekly song lists from that store.

Jim Shulman, a Pittsfield native, is the founder of the Berkshire Carousel and author of "Berkshire Memories: A Baby Boomer Looks Back at Growing Up in Pittsfield." For more information on the project and books (Volume I and II), go to berkshirecarousel.com.