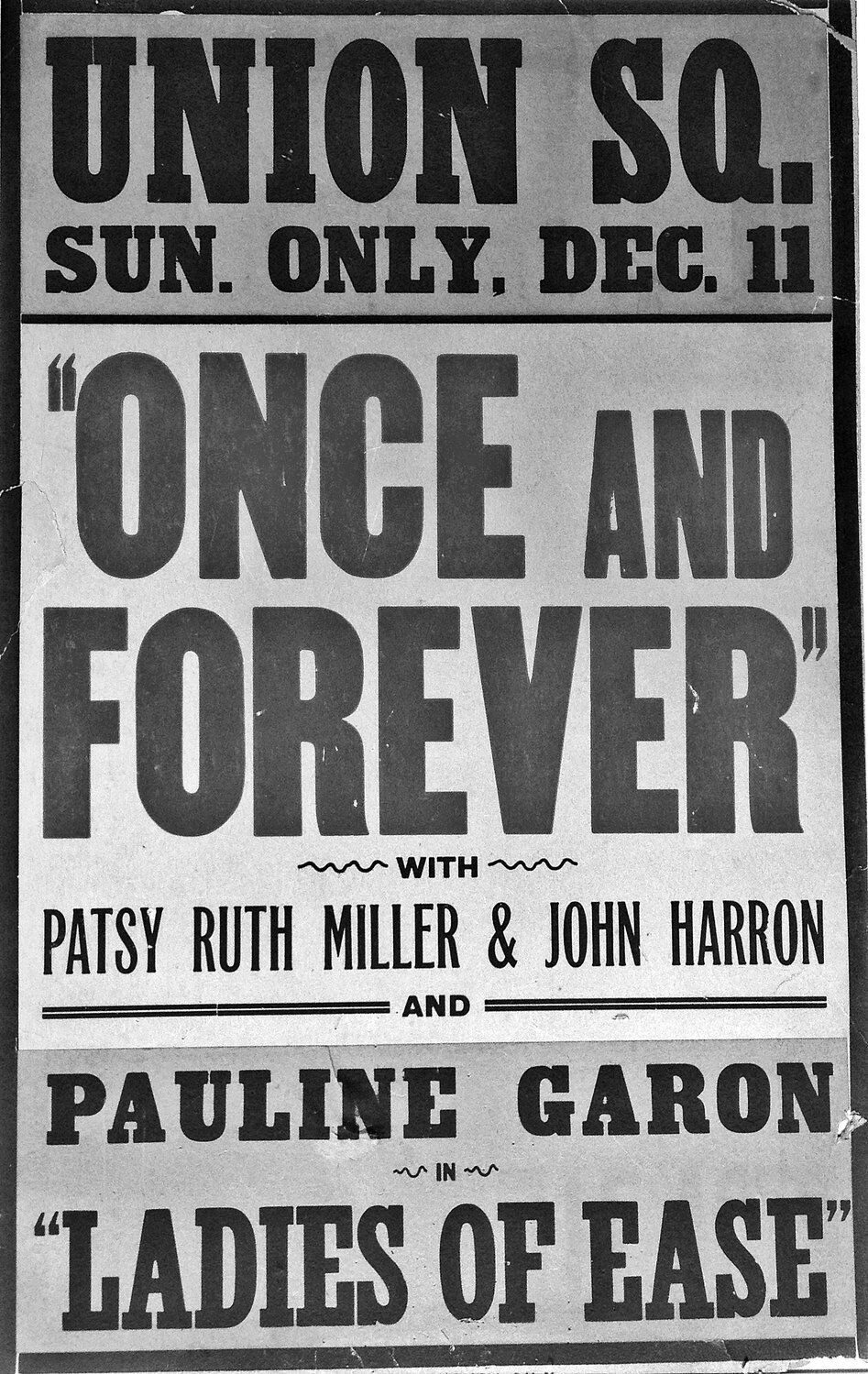 A Union Square Theatre movie poster. The theater began with stage and vaudeville acts, but as movies came about, it shifted into becoming a movie house. 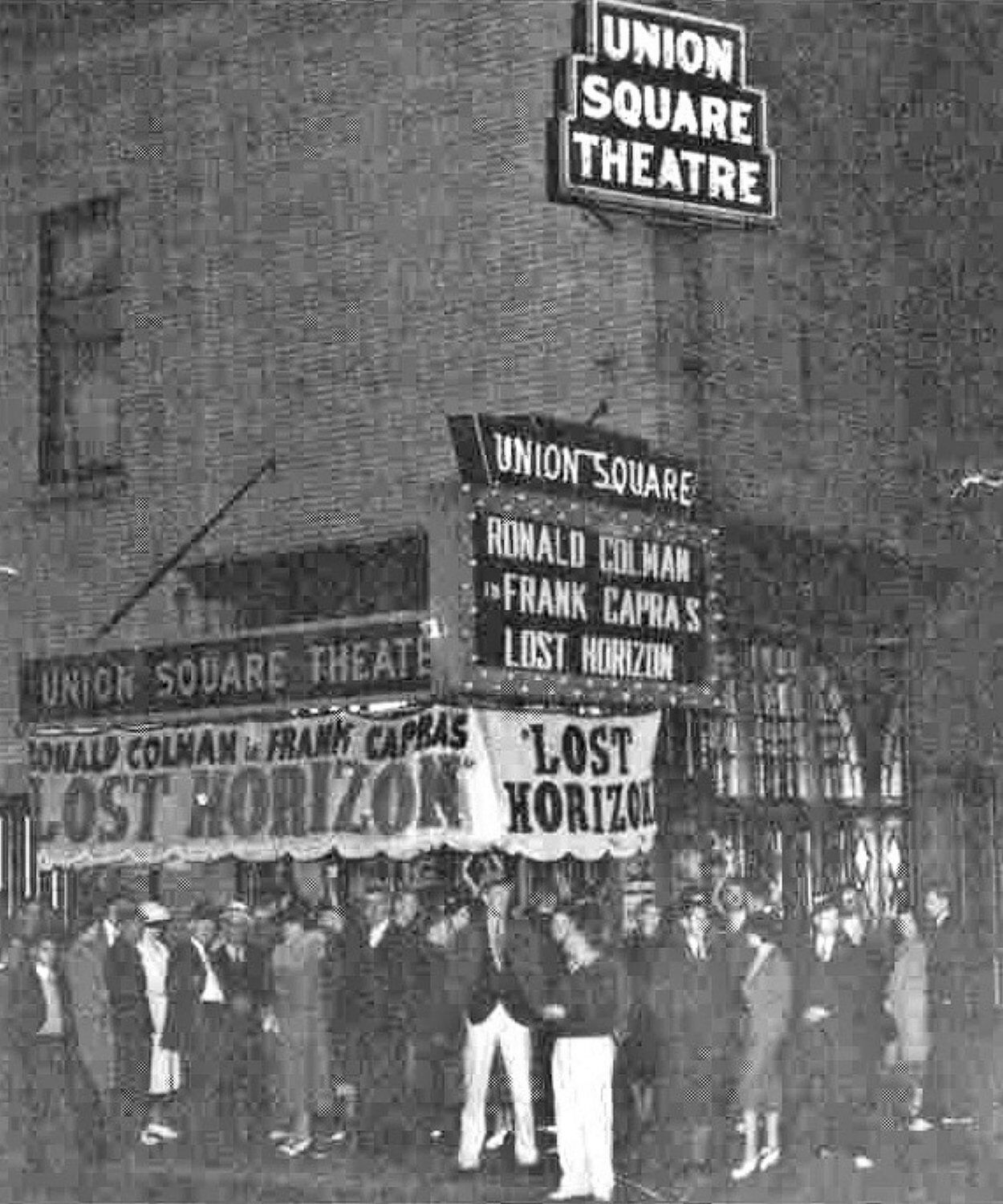 After a remodeling, Union Square Theatre, built in 1912, became the first local theater to have synchronized equipment for sound and film. At that time, the sound was most likely just music.

A Union Square Theatre movie poster. The theater began with stage and vaudeville acts, but as movies came about, it shifted into becoming a movie house.

After a remodeling, Union Square Theatre, built in 1912, became the first local theater to have synchronized equipment for sound and film. At that time, the sound was most likely just music.

In the late 1950s, I realized that some of my junior high school faculty members had second jobs.

To me, the most interesting of these was our guidance counselor, Mr. [John R.] Cooney. After school and on weekends, he could often be found selling tickets and ushering at the Union Square Theatre at 40 Union St. in Pittsfield.

Mr. Cooney would greet us with a smile and always told us to enjoy the movie. I later learned that his family owned the Union Square, which was one of my favorite theaters.

Mr. Cooney's grandfather, John F. Cooney, had the theater built in 1912 and opened it in September of that year, not long after Pittsfield's largest theater, the Academy of Music, was destroyed by fire. Union Square was sizable, with 1,200 seats and a 36-by-30-foot stage.

The theater began with stage and vaudeville acts, but as movies came about, it shifted into becoming a movie house. In 1921, John Cooney, son of the owner and father of our guidance counselor, began operating the Union Square for his dad, and ran the theater for over 40 years. He originally had his start in theaters as a youngster working at the Academy of Music.

In 1925, Cooney resumed having vaudeville companies at the theater. From 1925 to 1935, he leased the theater to the Goldstein brothers, who operated as many as 20 theaters in Western Massachusetts and Vermont — including four others in Pittsfield. However, due to a 1928 fire, the Cooneys took back the remainder of the lease.

Following a remodeling, Union Square became the first local theater to have synchronized equipment for sound and film. At that time, the sound was most likely just music.

Like many theaters, Union Square would often find interesting things left by patrons besides the candy wrappers and sticky gum. In 1939, Mr. Cooney found 24 sets of rosary beads during the year, likely because of the theater's proximity to St. Joseph's Church. (The beads were donated to the church.)

One might wonder what movies the bead owners attended. Unlike many of the other theaters, the Union Square did not offer much in the line of concessions. In fact, I remember a couple of nickel candy bar vending machines as the main source of theater snack food.

John M. Cooney sold the theater in 1967 to retire. From 1968 through 1981, the new operator, Steve Minasian, ran the theater as the Paris Cinema. He also owned the newer multi-screen Pittsfield Cinema Center located on West Housatonic Street.

But as single-screen theaters were becoming too costly to operate, Minasian sold the Paris in 1983 for the low sum of $15,000. The new owners, Frank and Iris Bessell, founders of the Berkshire Public Theater in 1977, planned to convert the cinema house back to a stage theater.

The couple kept the theater running off and on through 1995, when it failed to meet financial obligations and folded. Even with prominent local backers to provide money for taxes, the theater could not be saved.

A young entrepreneur, Raymond Schilke, then purchased the neglected building in 2003 for $160,000 with the intent to open a venue for music, movies and theater productions. The octagon house adjacent to the building was part of the deal. Despite his noble efforts to restore the theater, Schilke also was unable to make it work and sold it. The new owner was the Barrington Stage Company, a South County theater group that was seeking a permanent home.

This established local stage company remodeled the theater and opened it in summer 2004. Since then, the theater has been very successful and a major draw to Pittsfield's downtown.

On visits to Pittsfield, I have enjoyed several shows at the Barrington and always reminisce about the Union Square and its vending machines when I see the framed display of nickel candy bar wrappers on the wall. These were found during the remodeling.

Jim Shulman, a Pittsfield native living in Ohio, is the author of "Berkshire Memories: A Baby Boomer Looks Back at Growing Up in Pittsfield." If you have a memory of a Berkshire baby-boom landmark, business or event you'd like to share or read about, please write Jim at jesjmskali@aol.com.