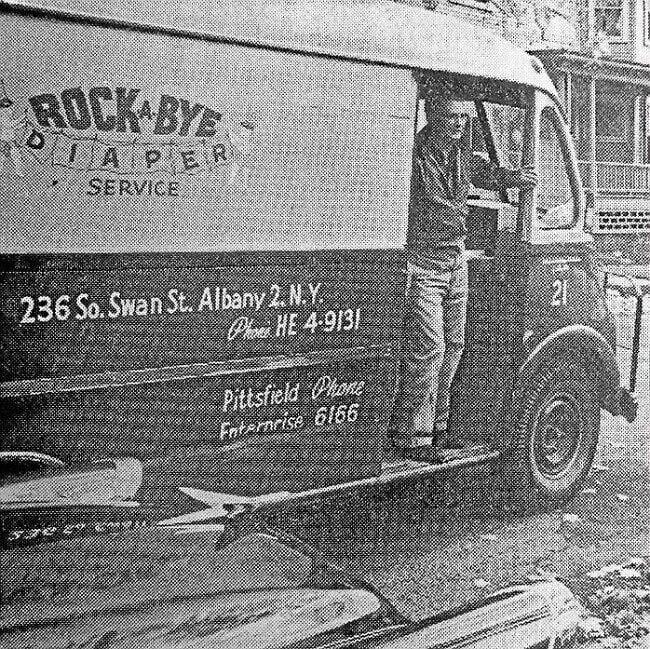 The Rock-A- Bye Diaper Service truck makes a weekly stop in Pittsfield. The company was based in Albany, N.Y. 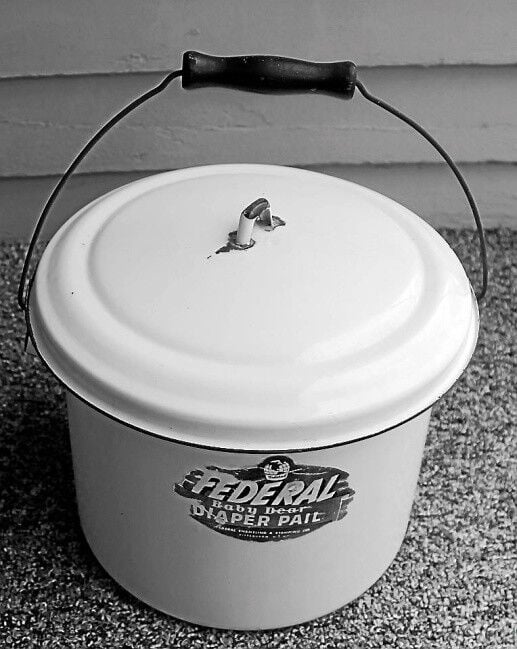 Diaper pails, like this one pictured in the 1950s, would be emptied of their smelly contents by a delivery service and refilled with clean diapers.

The Rock-A- Bye Diaper Service truck makes a weekly stop in Pittsfield. The company was based in Albany, N.Y.

Diaper pails, like this one pictured in the 1950s, would be emptied of their smelly contents by a delivery service and refilled with clean diapers.

The recent Berkshire Eagle article on the expansion of the Berkshire County Diaper Project into North County brought back some of my memories of the Baby Boom years.

When we were toddlers in Pittsfield, our folks did not have Pampers or similar disposable diapers. We had good old absorbent cloth diapers held onto us with safety pins.

Parents also would cover the diaper with rubber panties to ensure there were no unsightly (and smelly) accidents. Diapers were a mess to clean and not everyone had sparkling new washers and dryers or the time to clean diapers.

Women working during World War II and raising kids welcomed any reasonably priced service that made their lives easier.

One of these was the home diaper service. Parents had a diaper pail to toss in the smelly, soiled ones, and every week a truck would come by and trade new clean diapers for the contents of the pail.

Thus the diaper truck was familiar in many locales in the Berkshires. However, the vendors were often from outside of the Berkshires, but used Pittsfield phone numbers like the Rock-a-Bye Diaper Service from Albany.

Disposable diapers were not around until the 1940s and they were an expensive luxury most could not afford. In the 1950s there were some innovations in the designs of diapers like extra cotton in the center, making pre-fold diapers possible and snap-on diapers that used snaps instead of safety pins.

However it wasn't until the 1960s that diapers evolved into a more affordable disposable type that was made of cellulose. Disposable diapers coupled with parental mobility, e.g., taking a baby on longer day outings and distances from a recyclable diaper pail, basically put an end to the diaper cleaning services for several decades.

Now that many restrooms have changing tables in both men's and women's rooms, it is even easier on parents on daytime outings or traveling with their supply of disposable diapers.

With a growing concern about the environment, some parents have questioned whether or not disposable diapers are bad for the environment. Since the mid-1990s there has been resurgence in the use of better-developed cloth diapers.

Thus there is also a proliferation of companies that clean diapers. Their advertising suggests that over 800 million trees are killed annually to make chemically laden disposable diapers and over 12,300 landfills are filling with diapers daily.

American taxpayers pay over $300 million to process diaper trash from disposables. Retailers of cloth diaper alternatives claim that 200,000 throwaway diapers enter US landfills every 5 minutes and they will sit for at least 500 years before decomposing.

One company stated online that if Christopher Columbus had worn Pampers, his poop would still be intact in some landfill today!

The environmentalists do support cloth diapers as they present a less invasive alternative to the newer disposable models. The new washing systems are better for the environment by using generators that involve ozone to kill bacteria, which in turn requires less water.

The ozone also lessens the need for hot water and the use of better designed and made diapers that ring out better mean less fuel (natural gas) is used in the drying process. Both environmental issues are addressed and cost savings are realized. So diaper services may be a good future investment, especially with more women in the workforce, including work-at-home mothers.

The diaper cleaning industry almost died on the vine and is now on its way back, not unlike the rebirth of vinyl records. As long as babies need diapers and young people believe in recycling to protect the environment, there apparently will be a role for these firms.

Jim Shulman, a Pittsfield native, is the founder of the newly opened Berkshire Carousel and author of "Berkshire Memories: A Baby Boomer Looks Back at Growing Up in Pittsfield." For information, go to berkshirecarousel.com or visit the carousel at 50 Center St. in Pittsfield.

The Checkup for April 21: Countdown starts to resumed movies at Berkshire Mall