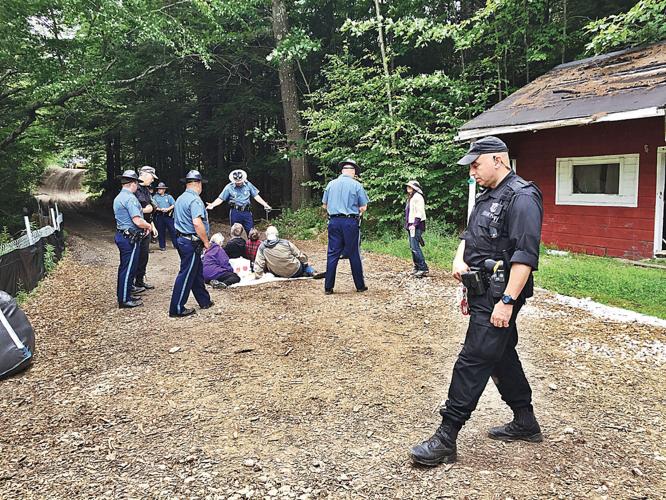 State police ask activists to move from a pipeline access road last spring. The activists were soon placed under arrest for trespassing. 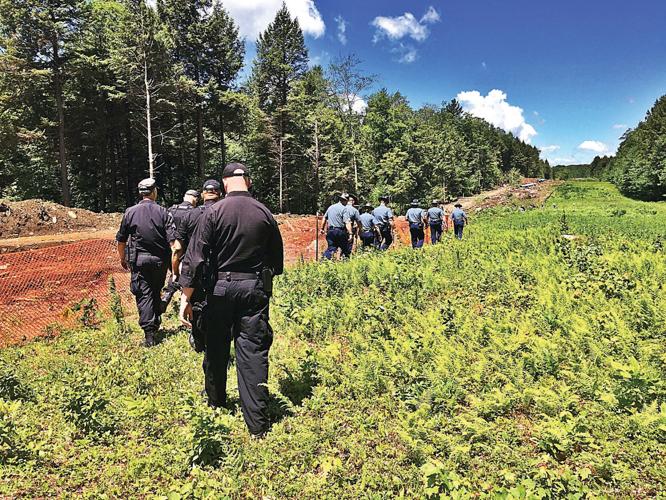 State police head down the pipeline corridor in Otis State Forest to warn activists away from the Tennessee Gas work area last spring. State police charged Kinder Morgan $115,000 for the costs of patrolling the pipeline work zone in May and early June.

State police ask activists to move from a pipeline access road last spring. The activists were soon placed under arrest for trespassing.

State police head down the pipeline corridor in Otis State Forest to warn activists away from the Tennessee Gas work area last spring. State police charged Kinder Morgan $115,000 for the costs of patrolling the pipeline work zone in May and early June.

SANDISFIELD — A Massachusetts State Police Department invoice shows $115,000 in charges to Kinder Morgan for pipeline-related trooper details at Otis State Forest between May 6 and June 3.

The invoice, related emails, as well as trooper names and hours working for the company's subsidiary, Tennessee Gas Pipeline Co. turned up on MuckRock, a public records request site.

The company was billed for troopers stationed in Sandisfield in the interest of public safety, or on call to respond to safety or security issues, and to protect the Constitutional rights of pipeline opponents to protest, according to state police spokesman David Procopio.

Procopio said in an email that such security or overtime work is routine, and does not "represent a conflict of interest."

"We do [details] for Patriots games, for the [Boston] Marathon, for concerts, for the July Fourth fireworks event on the Esplanade in Boston, for the Head of the Charles Regatta, to name a few," he wrote.

And the work here began not long after the protracted pipeline resistance at Standing Rock in North Dakota got international attention for protests of the 1,172-mile Dakota Access Pipeline.

Tennessee Gas' two-mile section of natural gas loop here, now being laid into an existing pipeline corridor, is approaching completion. But it is still drawing activists intent on arrest to draw attention to environmental and larger climate-related issues, as well as what they say is a stacked pipeline approval system overseen by the Federal Energy Regulatory Commission.

The state police presence — as well as that of private security from a big Boston firm — continues to infuriate activists. They say it points to government and corporate collusion that began when Tennessee Gas won the state forest easement in court despite the land's protection under Article 97 of the state Constitution.

So far nearly 60 people have been arrested peacefully — mostly for trespassing — since tree cutting began here in early May. Most of the protesters are affiliated with a Pioneer Valley-based climate activist group, Sugar Shack Alliance.

Sugar Shack's Vivienne Simon, who is head of the group's legal committee, said a private company contract with state police raises "serious questions" about whether police are acting as a "private arresting security force."

She further said that the state's repeated arrests of protesters, followed by the reduction of charges to civil offenses, further points to the protection of the pipeline company at the expense of the activists political freedom.

"If we are guilty of civil infractions, then we should be given tickets, just like people walking their dogs off leash in the forest, not arrested and removed," she said. "They certainly appear to be there to protect the pipeline, not the public."

Procopio said the police details are strictly in the interest of public safety, while also allowing activists their right to free speech.

But he also said that state police "protect the physical assets of public and private property, and of land owners" as well.

And the police details, Procopio said, do not " `blur the line' between private profit and public interest.

"Wherever we work, whether regular shift, detail, overtime, whether routine patrol, critical incident response, or security operation, our mission is to maintain and preserve the public's safety. That is the public interest."

"We do not deplete a regular shift to allow troopers to work a detail or overtime," he wrote.

And while Simon said if pipeline work is so dangerous it requires so much police presence, then the public should be "aggressively" told "there is a serious safety hazard in their backyards."

Procopio said state police will respond to any trespassing or "more serious criminal activity" that makes for "unsafe conditions."