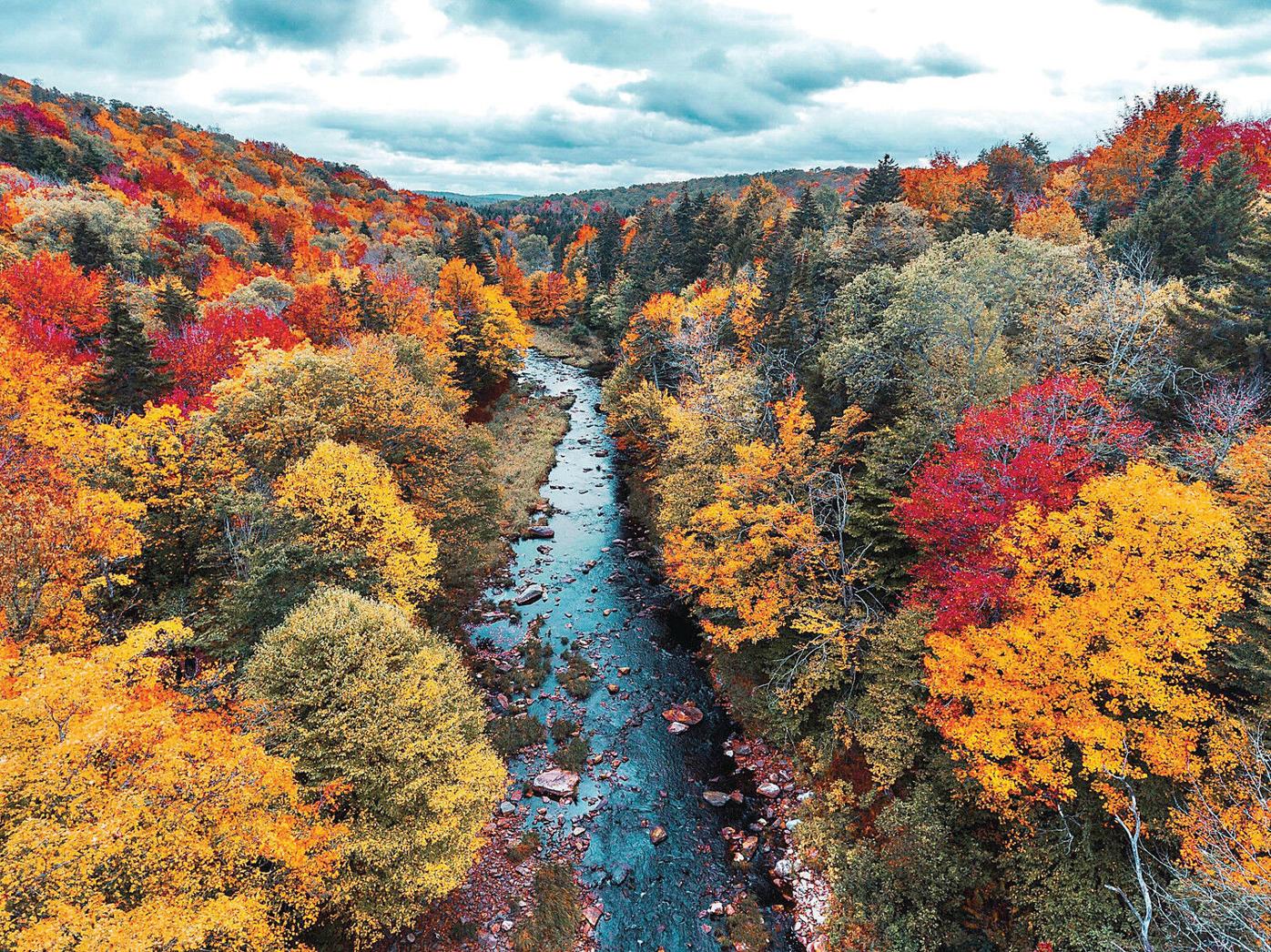 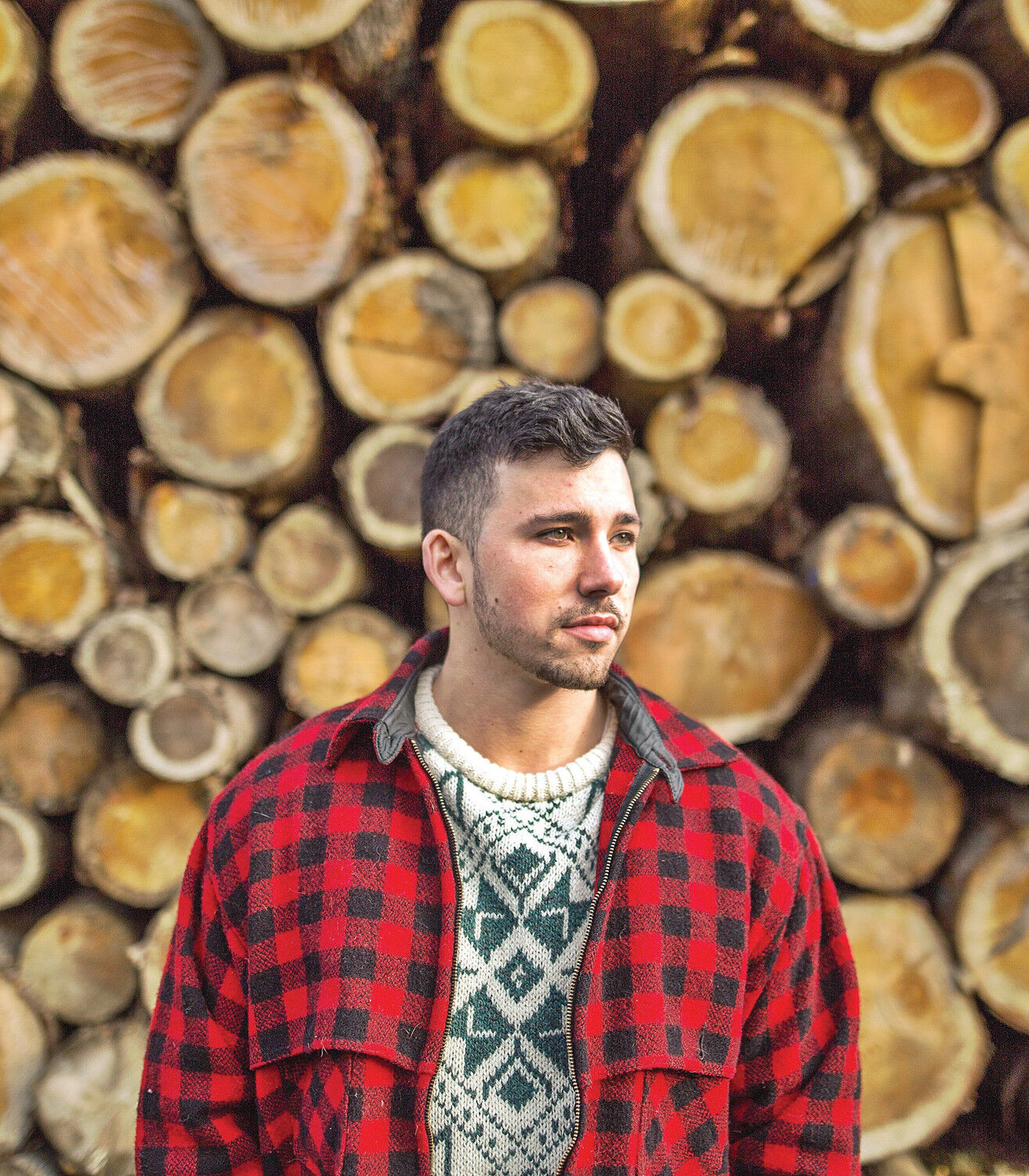 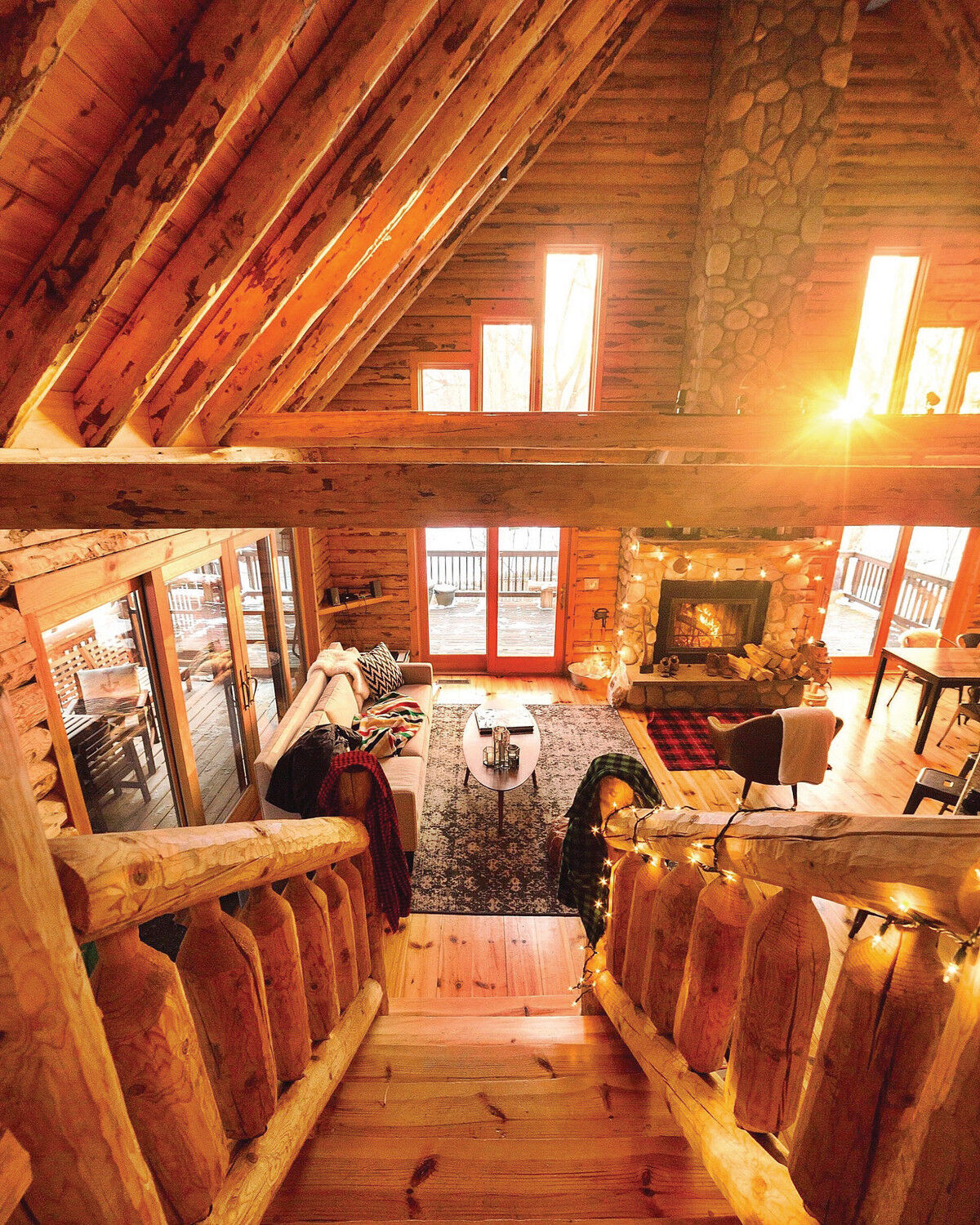 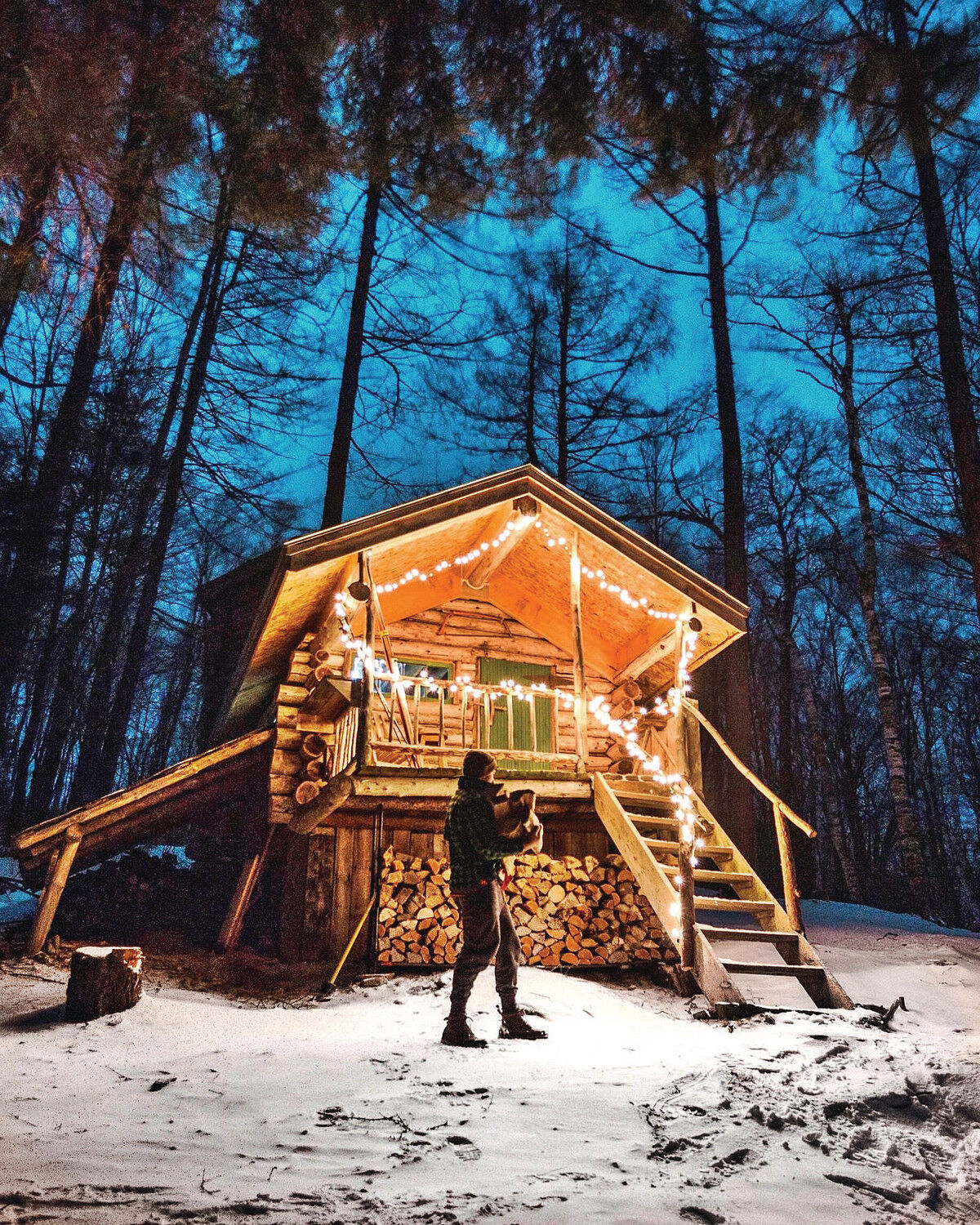 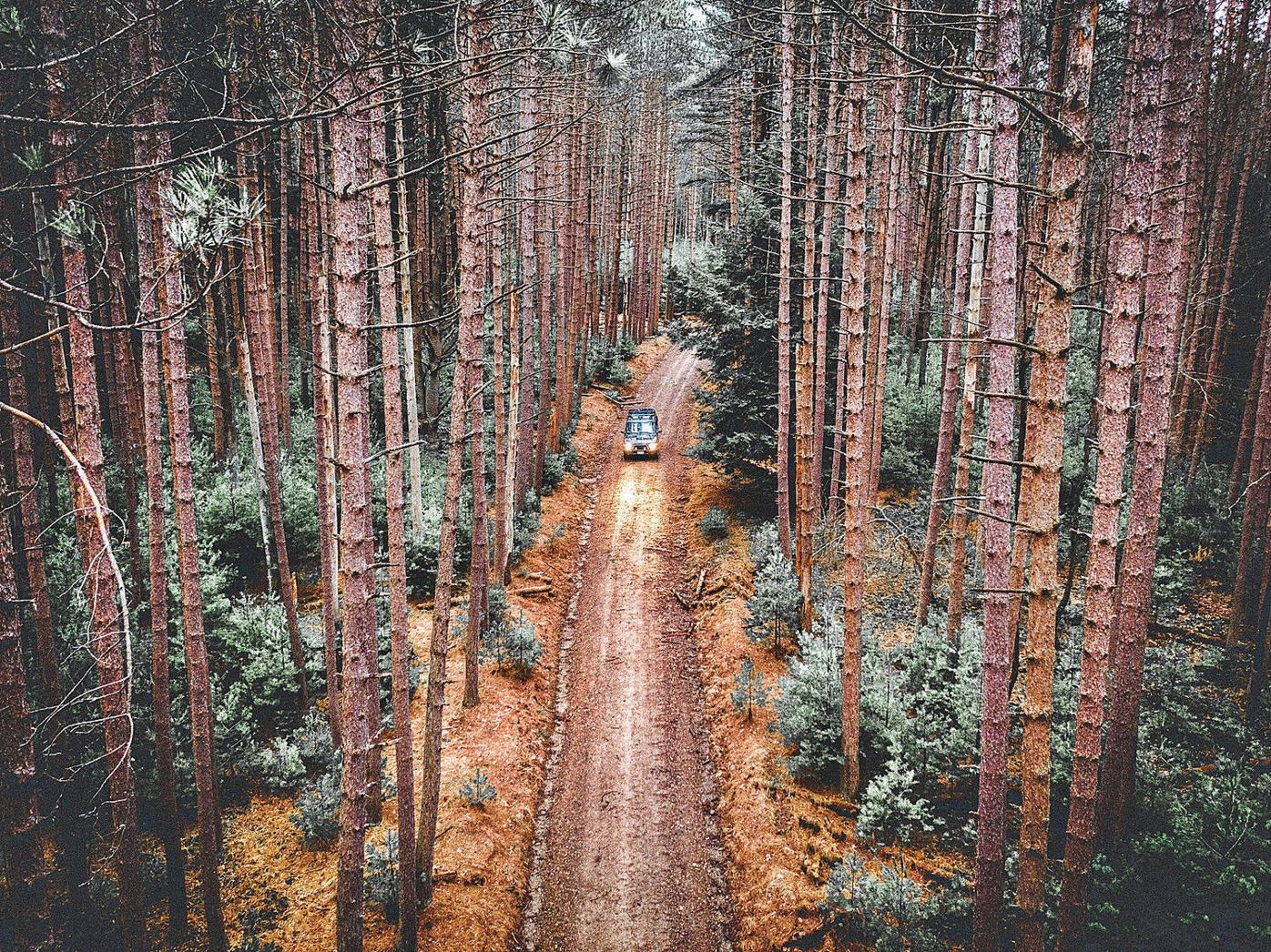 Kyle Finn Dempsey had just lost a DJI Mavic drone, the small pilotless plane he often uses to film landscapes for his YouTube channel and Instagram account, above the trees at Wahconah Falls State Park on Monday morning. The transmission device that allows Dempsey to view the drone's footage in real time and control its movements indicated that the aircraft had been disconnected.

"Is it straight above us?" Dempsey wondered, tilting his head back from his position amid the ice and rocks downstream of the waterfall.

Soon, the drone reappeared to his left. Dempsey regrouped next to the stream.

"That's pretty terrifying," the 25-year-old Cummington resident said, noting that he rarely loses contact with this particular drone (though he has lost several others over the years).

For Dempsey, the drone is more than just a cool toy. It's essential to his business. While his "Trout & Coffee" YouTube channel is in a nascent stage, the bucolic videos and photos he posts daily on his Instagram account, kylefinndempsey, have earned him more than 372,000 followers, affording him the social media clout to create his own photo filters and advertise on the handle for brands in a variety of industries. This year, for instance, he says he is working on long-term projects with Samuel Adams and Nature Valley. The idea is to capitalize on what Dempsey calls his "adventurous, outdoorsy, rustic, nostalgic, classic" style of visual imagery that often trains its lens on the Berkshires and other scenic New England areas.

"You'll find old vehicles and campfires, log cabins. It's like the Northeastern classic dream in a way," he said of his account over a cappuccino at Juice N' Java later that morning. (He pulled out a camera after a server brought the drink. "I can't do anything without wanting to document it in some way," he said later.)

Whether it's a cozy point-of-view shot from a Connecticut cabin or an aerial capture of a snow-lined Berkshires road, Dempsey aims to offer an escape for his followers.

"I'm providing a portal to someone at a cubicle to get out of work for a second. That's what I do every day," he said.

But with that service comes a burden Dempsey can't escape. After recovering the drone that morning, Dempsey reviewed footage that, to many, would inspire awe. The plane that was launched from Dempsey's hands had soared high enough to see farms and mountains for miles on end in a matter of seconds. Its owner could only see bare branches, though. During winter, that wouldn't work well for Instagram. People want Winter Wonderland, not January Thaw.

"Everyone wants to see the best of everything," he said, "the best of the season."

Last September, Instagram surpassed 800 million monthly active users. The number was half that two years earlier. Though Facebook still reigns supreme in the social sphere (it has more than two billion monthly active users), the company it bought for $1 billion in 2012 is growing fast and expanding beyond the realm of the photo-sharing platform Kevin Systrom and Mike Krieger started in 2010. Videos and direct messaging, for instance, are now vital features.

Major brands have taken notice, paying models and celebrities handsomely just to promote products on their accounts. Yet, an element of Instagram and other social media platforms' appeal is in the perception of their users' authenticity, and celebrity endorsements can feel transparently hollow at times. Enter social media "influencers," the digital-world stars who aren't traditionally famous and, consequently, are more relatable to average users. They have mastered the art of being, or at least appearing, genuine. When they speak well of companies' latest offerings, they're sharing rather than touting. They're persuasive.

That doesn't mean influencers don't seek celebrity in more traditional forms. Dempsey's ultimate goal, for example, isn't Instagram influencer domination. It's a career in film, where he doesn't have to apply a filter to everyone and everything all the time.

The 'visual side of things'

When he was at Wahconah Regional High School, Dempsey created rap videos. He didn't know exactly what he wanted to study in college, but he thought it would be creative.

"I loved the visual side of things," he said.

After brief stops at Massachusetts College of Liberal Arts and Champlain College, he settled at Johnson & Wales University, where he got involved in camera work for the advertising program. He didn't take any photography or film classes at the school.

After graduating, he focused on video and eventually became a news cameraman for 22News in Chicopee. Before arriving, he had driven throughout the West in a 2001 Land Rover Discovery, which he still owns, and worked on his filmmaking. He quickly yearned to hit the road again (he is nicknamed "Huck" for his adventurous, Huckleberry Finn-esque spirit), so he quit his job and began filming a film series, "Come Find Me," while traveling the country during the fall of 2015.

In December, he returned home and began working at Ooma Tesoro's, the Berkshires-based marinara sauce company. But boredom soon set in, and Dempsey wanted more time to build on the Instagram following he had been cultivating since the end of high school. He quit the job and started using his afternoons to shoot Instagram photos and videos in various local spots.

"I would always go to Plainfield Pond, and I would pack a canoe with a tent, lights and a ton of wood, guitar, and take photos of that. No one had really seen that," he said.

One day, Dempsey found some old A-frames at an abandoned camp in Cummington. The doors were unlocked, and the interiors were bare.

"I went into one and brought some props and made it look like it was super cozy and homey. [I] took two pictures, and I posted them, and, like, right away Country Living [magazine] reposted it," Dempsey said. (The magazine has more than 1.3 million Instagram followers today.)

After the photos gained traction, Dempsey got a call from the Cummington Police Department instructing him not to go in the unoccupied buildings any more, according to Dempsey.

In the spring and summer of 2016, Dempsey's followers grew exponentially. Follower counts matter; a New York Times story recently drew attention to the practice of buying Twitter followers among celebrities and influencers. Did Dempsey ever do something similar on Instagram?

"I've done it on old accounts and stuff, but I've never done it with this account," he said, adding that Instagram's infancy motivated him to "try anything" to get an edge with his early handles.

Companies began sending him messages and reaching out via email to promote their products. Bradley Mountain, a San Diego-based company that makes bags and other goods, offered him about $300 if he photographed a backpack they sent him, according to Dempsey. He agreed.

"They absolutely loved it, and I still work with that brand today," he said.

A digital media company then asked him to make his own presets for Adobe Lightroom. Dempsey doesn't use the Instagram-supplied filters, such as Clarendon and Juno. He edits in Lightroom, often taking about 30 minutes to tweak his shots. Basically, customers can buy photo filters, or presets, that mimic "Kyle Finn Dempsey" compositions.

The presets' sales provided him with guaranteed income. Meanwhile, after starting the summer with about 25,000 followers, he had reached 75,000 by its end.

"That summer was crazy. Things were just taking off. I was shooting like every day; I would come up with an idea in my head, and go out and do it, and then I would post it that night, and it would take off," he said.

"When you're very on top of the season and you put the best content out that's seasonal, these big accounts, these earth-focused, earth travel ... accounts, just repost them, and they all have millions of followers, and then it brings all those people to you," he said.

Recently, Dempsey posted a photo of a back road in Windsor. Beautiful Destinations, an account with more than 10 million followers, reposted it.

"It's like, who would've thought Windsor would be on beautifuldestinations? That's worldwide," Dempsey said.

The season's highlight, however, was when Land Rover reached out about a potential partnership. They wanted the Land Rover driver to visit about 15 cabins in the Northeast during the winter of 2017.

"That's when I just got this library of cabin photos, about 100,000 photos, something ridiculous," Dempsey said.

Since it's winter, he has posted many lodges recently. His favorite place to shoot is Vermont — all of it. ("I just love the landscape and the feeling. The rivers are teal. You would never expect it," he said.) In the Berkshires, Plainfield Pond is his go-to.

His contracts with different clients have subsidized his wandering. The agreements have varied significantly.

"This is so undiscovered. No one really knows what's going on," Dempsey said of firms navigating the world of Instagram marketing.

Influencers who have refined their pitches can control the negotiations.

"You could easily make 50 grand a year," Dempsey said. "I definitely make more than that."

But he isn't necessarily fulfilled by his escapist posts.

"You have to cater to the audience so much because you grow in your niche and then people expect to see that from you every time, so it's so hard to be creative and break out of that," he said.

A more traditional medium — film — may yet offer that freedom. He wants to build his YouTube channel into a daily destination for episodes starring himself. Though he doesn't think that Instagram posts are, for the most part, toxic or inauthentic, he feels that the medium doesn't allow for full creative expression.

"It's all real. It's all stuff that has actually been done and photographed. People have been there," he said. "I think what gets left out of Instagram is the story of what it took to get to that point. How do you get to the most beautiful place in the world? How do you get to the best cabin in the world? That's not said on there, which is why I want to tell more of that story through everyday filmmaking."