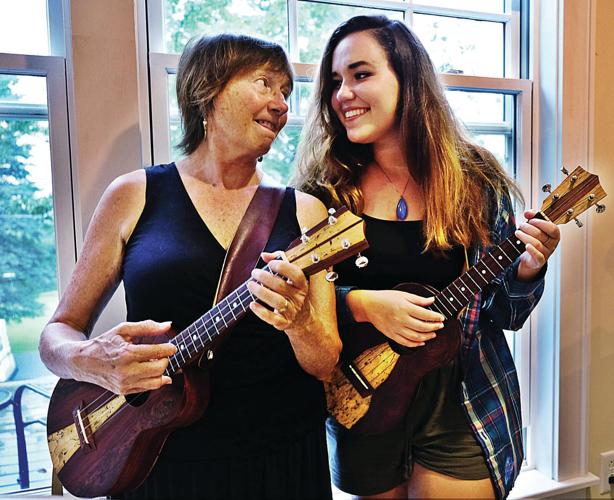 Bernice Lewis, left, and her daughter, Mariah Colorado, with their ukuleles. The mother-daughter duo perform together regularly.NINA COCHRAN - THE BERKSHIRE EAGLE 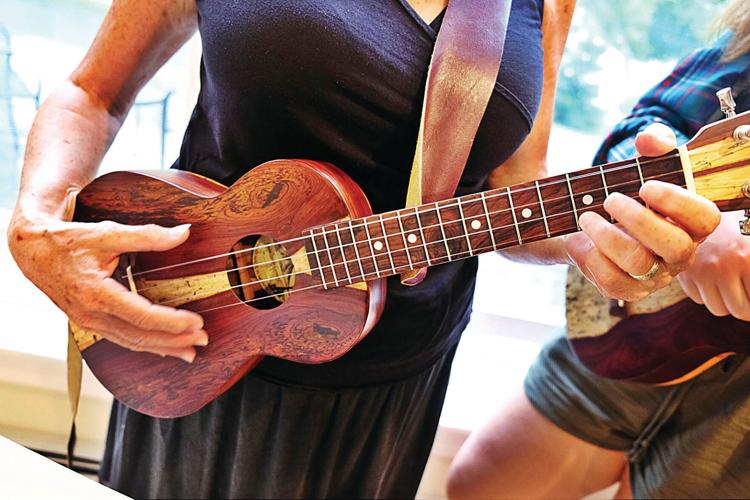 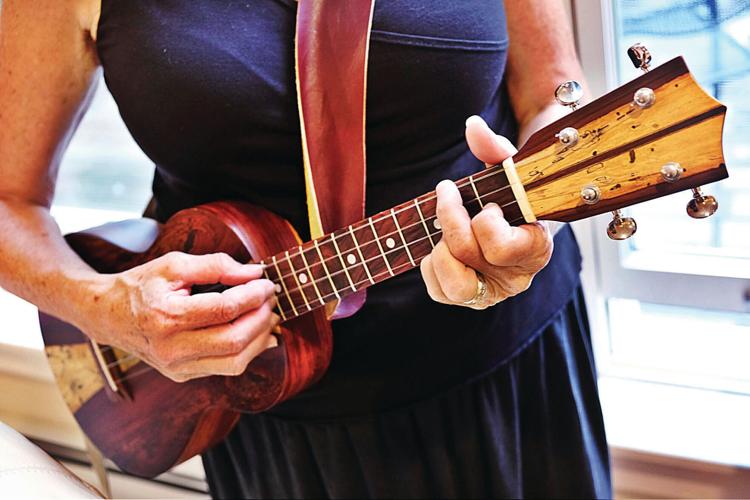 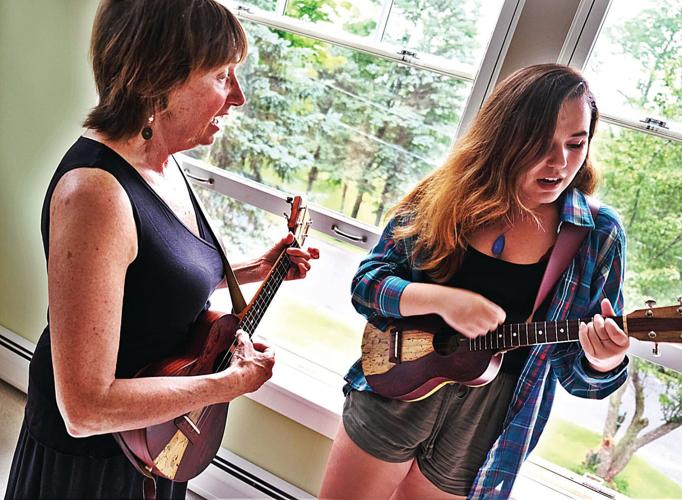 Bernice Lewis, left, and her daughter, Mariah Colorado, with their ukuleles. The mother-daughter duo perform together regularly.NINA COCHRAN - THE BERKSHIRE EAGLE

WILLIAMSTOWN — Songwriter Bernice Lewis has been playing the ukulele long before the stringed instrument became popular.

When Lewis joined the Ladies Auxiliary Ukulele Orchestra nearly 25 years ago, the band was adapting music from Mozart to Led Zeppelin, as ukuleles were largely novelty instruments. Now, she said, "everyone seems to have one."

She credits the appeal to its accessibility.

"You could spend a lifetime learning to be a maestro, but I could teach just about anybody how to play 'You are my Sunshine' in three minutes," she said. "You can buy a half-way decent one for very little money, and it's very transportable."

It's the instrument's size that first drew the Williams College songwriting teacher to it.

Following arm and shoulder injuries, she gravitated toward the ukulele.

"For women, the guitar is a little big, [whereas] the ukulele organically fits our body size," she said.

It's size is why Lewis' daughter, Mariah, has joined her mother's band, making the ukulele a family affair.

"My [primary] instrument is piano," said Mariah, 17, "but we can't lug a baby grand around. The one we truly have in common is the ukulele."

"She's a very good musician and picks things up very quickly," acknowledged Lewis, "but the biggest challenge of playing with your kid is you have to be mom first."

Mariah — who has been performing her own songs with her mother in front of crowds since she was 12 — will join Lewis and Boston-based bassist Maya Mortman for two Ladies Auxiliary Ukulele Orchestra performances on Friday evening: one in New Lebanon, N.Y., the other in Sheffield.

Mortman, who plays both stand-up and ukulele bass, grew up in the Berkshire area and attends Berklee School of Music in Boston. She is the newest member of the trio, bringing that three-part harmony Lewis so craves. While the band is often a duo, "I'm always hungering for that third harmony," Lewis explained. "When you add the third part, it's kind of magical."

Brought to the Hawaiian islands by Portuguese sailors, ukuleles ranging in size from soprano to bass are made throughout the U.S., including the Berkshires. Lewis plays a Mya-Moe ukulele from Washington state, and recently bought two more made from Nicaraguan cocobolo wood. The two previous bass players were men. One, Dale Ott, "voluntarily shows up in a skirt," Lewis said, "and Dan Broad has hair longer than both of us."

But Lewis — who came to music late in life, learning guitar in her early 30s — also craved both the company and creativity of women.

"I was always interested in joining an all-female [band] and singing three-part harmony," she said. "With the overt masculinity of the music business, you're functioning constantly in a locker room."

About five years ago, Lewis was motivated to challenge the ukulele to be something that was not only witty — which most ukulele music is — but also beautiful.

"We mix it up with the guitar and do a lot of originals, as well as cover songs," she said.

Though the group has seen many changes, both musically and in its size, the mother-daughter duo work to keep it going.

"One of the reasons I've been motivated to hold this group together," said Lewis, "is because, particularly for women, it's healing to sing and play together."

"We have very different voices, but really enjoy harmonizing together," Mariah said. "People comment on how the blend of two voices that really know each other works so well."

Mariah hopes to attend college close enough to continue performing with her mother — "if she'll have me," she said.

"We just take it as it comes," her mom replied. "I still think there's room out there for a kick-ass all-female ukulele band."