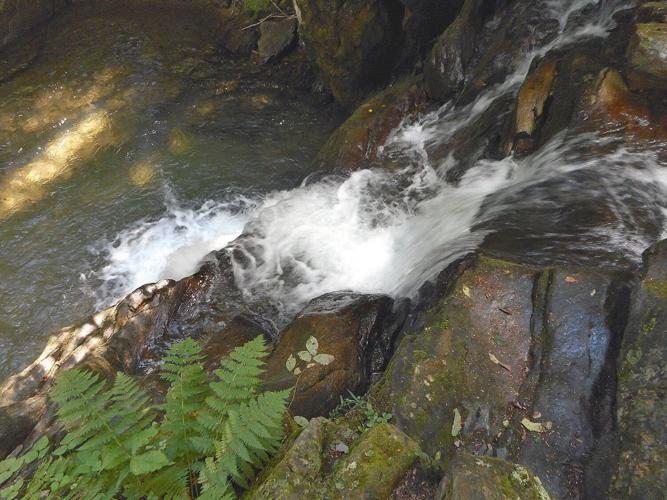 The well-known falls on Peck's Brook are close to Gould Road. 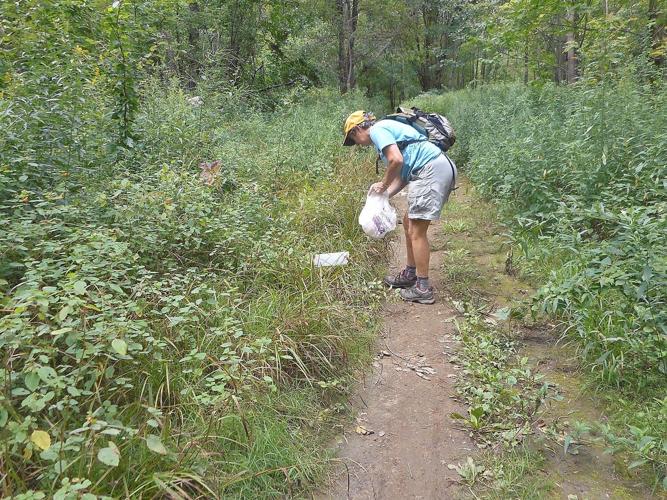 Heather Linscott, a volunteer at Greylock Glen, picks up someone else's mess on the Bellows South Trail. 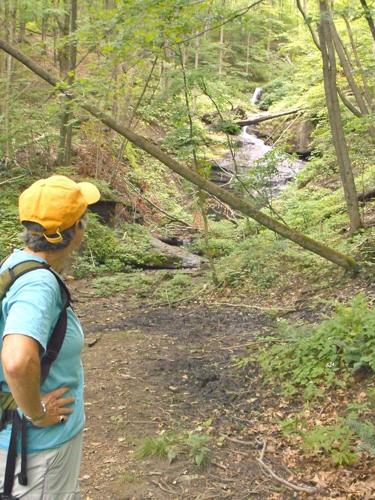 With new trails, visitors can view the charm of Ribbon Falls. 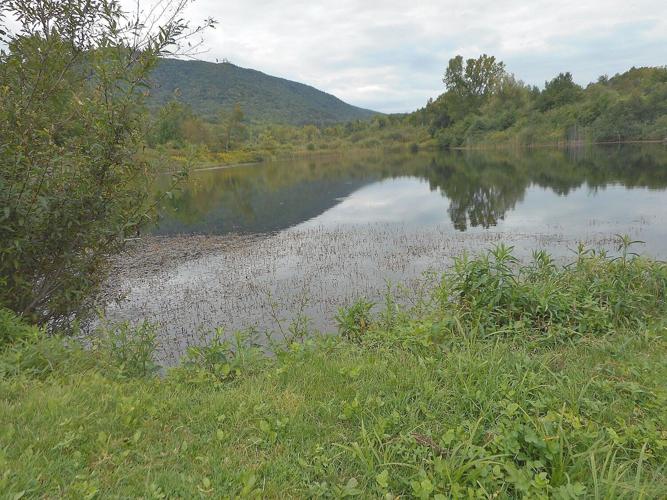 The pond is the nexus for trails at Greylock Glen.

The well-known falls on Peck's Brook are close to Gould Road.

Heather Linscott, a volunteer at Greylock Glen, picks up someone else's mess on the Bellows South Trail.

With new trails, visitors can view the charm of Ribbon Falls.

The pond is the nexus for trails at Greylock Glen.

"The Glen is my backyard," says Heather Linscott, who indeed has lived nearby all her life, but who now is preparing to share Greylock Glen with hikers, mountain bikers, skiers, dog walkers (as long as they pick up), baby strollers, horseback riders and just about anyone who would like to recreate. Heather, with others, is helping lay out, cut and name trails to serve the public.

Many new trails are designed specifically for mountain bikers but she says there is no problem sharing them with hikers.

"They may not get to the destination as directly as hiking trails," she says, "but a hike is a hike."

The mountain bike trails tend to incorporate frequent switchbacks in the steep terrain, in order to make them less steep — and to make the routes more interesting.

Some of the trails, which professionals laid out in general terms, wind though the area where developers once began a downhill ski resort. The pylons for the lifts and the piping for snowmaking equipment remain and will not be removed. The Thunderbolt ski trail, recently reopened and maintained by volunteers for backcountry skiing, ends in the area, as does the Bellows Trail South. Some of the area operated as a golf course for a few seasons.

We zigzagged our way on foot up the Wolf Tree Trail which, sure enough, passes several large, spreading trees. They stood out because the rest of the area was in new growth, recovering from the failed effort at a ski area. Wolf Tree begins and ends on the Bellows South Trail. The system is well marked, with attractive signs, most with distances. It includes an area at the base of the Thunderbolt Trail that volunteers have been mowing in the fall to prepare for ski/snowboard season.

Meeting up with the Bittersweet Trail, we then followed the Ribbon Falls Trail a few hundred feet to the well named (the "Ribbon" part) and previously little-known cascade. It is one of those totemic sites that Linscott heard about from Betty Bressett and now has created a trail so that others can find it. It tumbles from Greylock, the same North Branch of Peck's Brook that joins the South Branch at Peck's Falls, the much better known destination a hop, skip and a jump down a well-worn trail from Gould Road.

Heather's and others' current project is a Connector Trail between Gould Road and West Mountain Road. As yet unsigned, it crosses open meadows with a view of Greylock and passes a formidable stonewall before navigating trickier terrain. It thereby hooks up with the Hidden Meadow Tail and the Moser Farm Trail, essentially linking in the southernmost portions of the Glen — the area near the Cheshire Harbor Trailhead.

The focus for most Glen visitors, though, is the gazebo off Gould Road. Here several of the trails come together. The Nature Trail around the pond, and an extension around a couple of smaller ponds, are not well maintained or used. The main pond was to be a water source for snowmaking. The gravel Glen Meadow Trail, which forms a loop with Theil Road and the gazebo, is accessible to all and a fine way to discover the beauties of this land and its relationship to the mountain.

Privies are scattered about, including one at the gazebo, together with signs and maps—although the maps are still in the formative stage, as new trails are opened. Few of us will become as intimate with the Glen as Linscott and others who have spent a lifetime of prowling the area, but as the Town of Adams develops a nature center and other light amenities, we are all invited to become acquainted with the property.