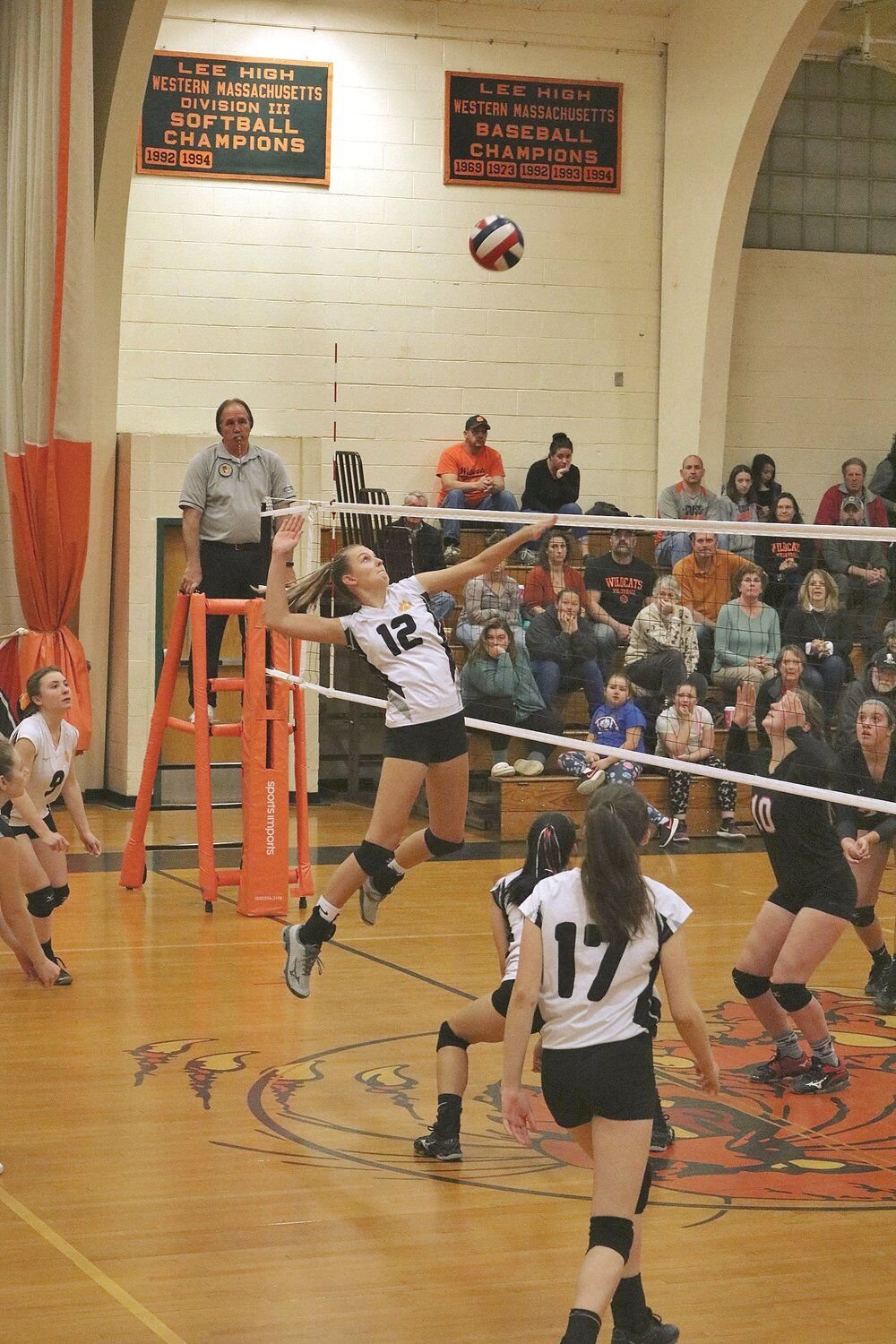 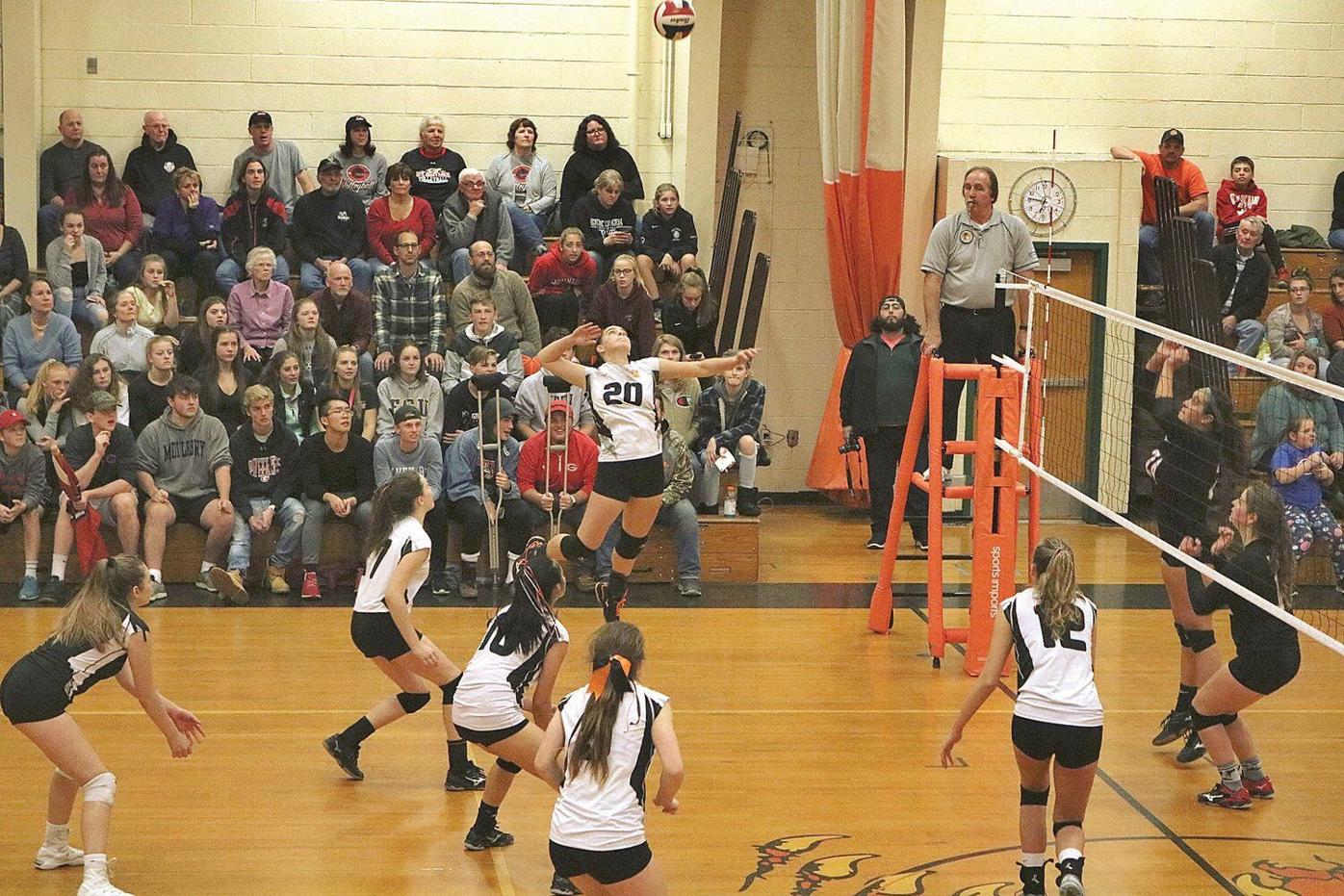 LEE — In a knock-down, drag-out semifinal Wednesday night, the Wildcats were glad their youthful first-year head coach had some spare energy early on.

"It's really funny. [head coach Julia Warner] does a dance with us. We all laugh and it gets us in a good mood," Lee junior Erin Brisebois said of the aftermath of a 25-21 opening-set loss to No. 5 Mount Greylock. "It gets us to stay positive and release that tension."

While it was hardly a coast from there, top-seeded Lee managed to bounce back and win the next three sets to eliminate the Mounties, 3-1. The Wildcats took the match 21-25, 25-20, 25-16, 25-18, setting up a fifth consecutive date with No. 2 Frontier in the Western Massachusetts Division III title game.

"We always play a lot better when we are having fun," said Warner. "Looking forward toward Saturday, we faced them in the regular season and it went their way, and we're hoping it will go our way this time.

"They're an incredible program, but with all of our experience, hopefully we can build on this."

The Red Hawks took out a third Berkshire County squad, Lenox, on Wednesday in a three-set sweep in South Deerfield.

Back in the Berkshires, a pair of familiar foes set about throwing haymakers at one another, often with neither side breaking. Lee took the match, but had to fight from behind in all four sets.

Takiera Darrow was dominant at the net in the opener for Mount Greylock, and senior Gabby Alvarez was doling out assists to Emma Sandstrom, Alyssa Phelps and classmate Lucy Shepard during a thrilling introduction to a packed house in Lee. After Emma Hayward came up with a dig against the back wall to save a possession and earn a point to make it 23-18, the Mounties continued to stun their hosts into the second set.

"We were kind of down on ourselves," admitted Brisebois. "We knew we could play better, that wasn't our highest potential."

A Hayward ace put the visitors up 9-5, before high-flying sophomore Kylie Joyce started dropping some bombs for the hometown crowd. Joyce had five of her match-high 13 kills in the second set, and added an ace that put the Wildcats in front 10-9.

The tug-of-war continued with Lee building a 20-17 lead, before Lucy Shepard forced a Wildcats timeout with an ace that made it 20-20. Warner got her squad to settle down, though. Suriana Lee connected with Joyce for a kill out of the stoppage and Lee rolled off five-straight points to even the match at one a piece.

Momentum was hard to come by for either side on Wednesday, and Greylock proved that by snatching a 13-9 lead on an Alvarez-to-Phelps kill in the third set.

However, Lee senior Suriana Lee wasn't about to let a final chance at the sectional crown slip from her grasp on her home court. She took over service trailing 15-12 and went on a lengthy run. The star setter's steady play helped guide the Wildcats from a three-point deficit to a 22-15 lead before the Mounties regained the serve. The 11-0 run featured a block and two kills by Brisebois, both set up by Lee's only other senior, Aliyah Noel (14 assists), and even a Suriana Lee kill as well. The Wildcats rolled it out from there, with Suriana Lee (21 assists) setting up Brisebois for the set-sealer, 25-16.

"She brings a lot of positivity to the floor. Her leadership, throughout many years, she's always been a leader in some way or another," said Warner of Lee. "To go on a little bit of a run allowed us to loosen up a little bit, take a full breath."

Then it was the Mounties' turn to play with backs against an elimination wall, and Geyer's squad responded once again to the Lee challenge. Following an early timeout after Brisebois kept flexing at the net for a 6-3 'Cats lead, Greylock went on a 10-3 run of its own. Lucy Shepard dropped in an ace, as did Hayward, and Darrow wrestled back some control in the middle from Brisebois for another 13-9 advantage.

Emma Puleri took over service for Lee at 13-10, and dropped in a pair of aces, alongside a Noel-to-Lee kill that helped the Wildcats turn the tables and go up 15-13.

It was a big night for the Wildcats' sophomore outside hitters, as Lizzy Brown (10 kills) joined Joyce in leveling spike after spike of the Mounties defense. She fired down a kill from Noel to keep the Mounties from tying it back up, and then dropped in an ace to make it 19-15.

"It was a great, great match. Lot of emotional runs," said Geyer. "I never expected this. Every girl on this team is playing a new position. Everything is new. To go this far, to play this well. I'm so proud. I'm so proud of the captains, our seniors. Hat's off to Lee. That's a strong team, and we were there with them every point."

At that point, the Mounties were running on fumes, and Lee was a runaway train with the next stop already determined.

The Wildcats will pull into the Western Mass. final on Saturday at 2:30 p.m. at West Springfield High School. The 14-time defending champion Red Hawks are there waiting.

After Frontier's victory over Lenox, coach Sean MacDonald told The Eagle: "I know they are the cream of the crop in the Berkshires, and they have been for several years. They've gone through a coaching change and haven't missed a beat. Julia is doing a nice job after John retired. I'm expecting a real fight with Lee, because whatever happened here a few weeks ago doesn't get us anything on Saturday."