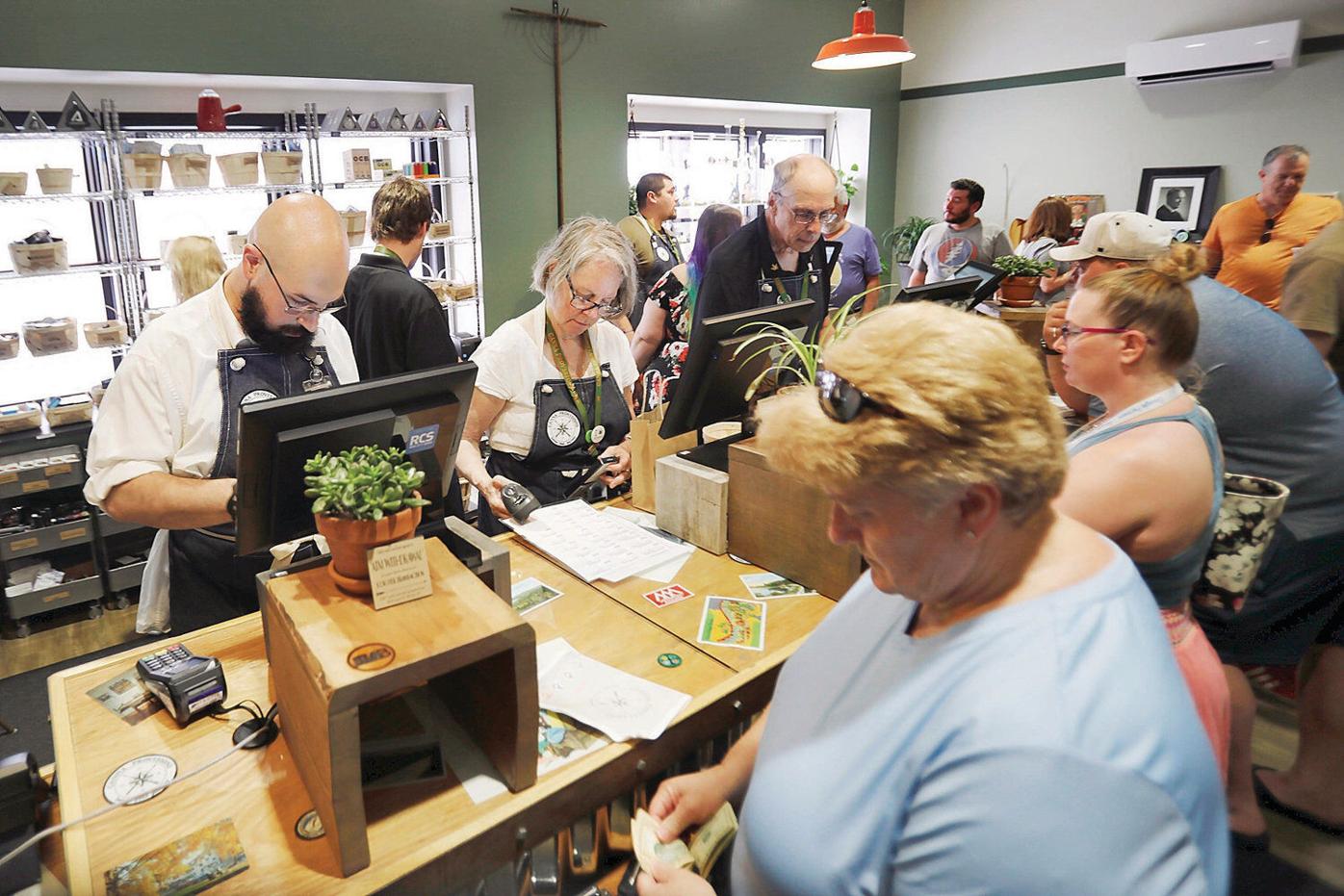 Business is brisk Friday, during opening day of Canna Provisions, Lee's first recreational marijuana dispensary. The management team attributed the fast and fluid service to the way staff is assigned to different duties in the store. 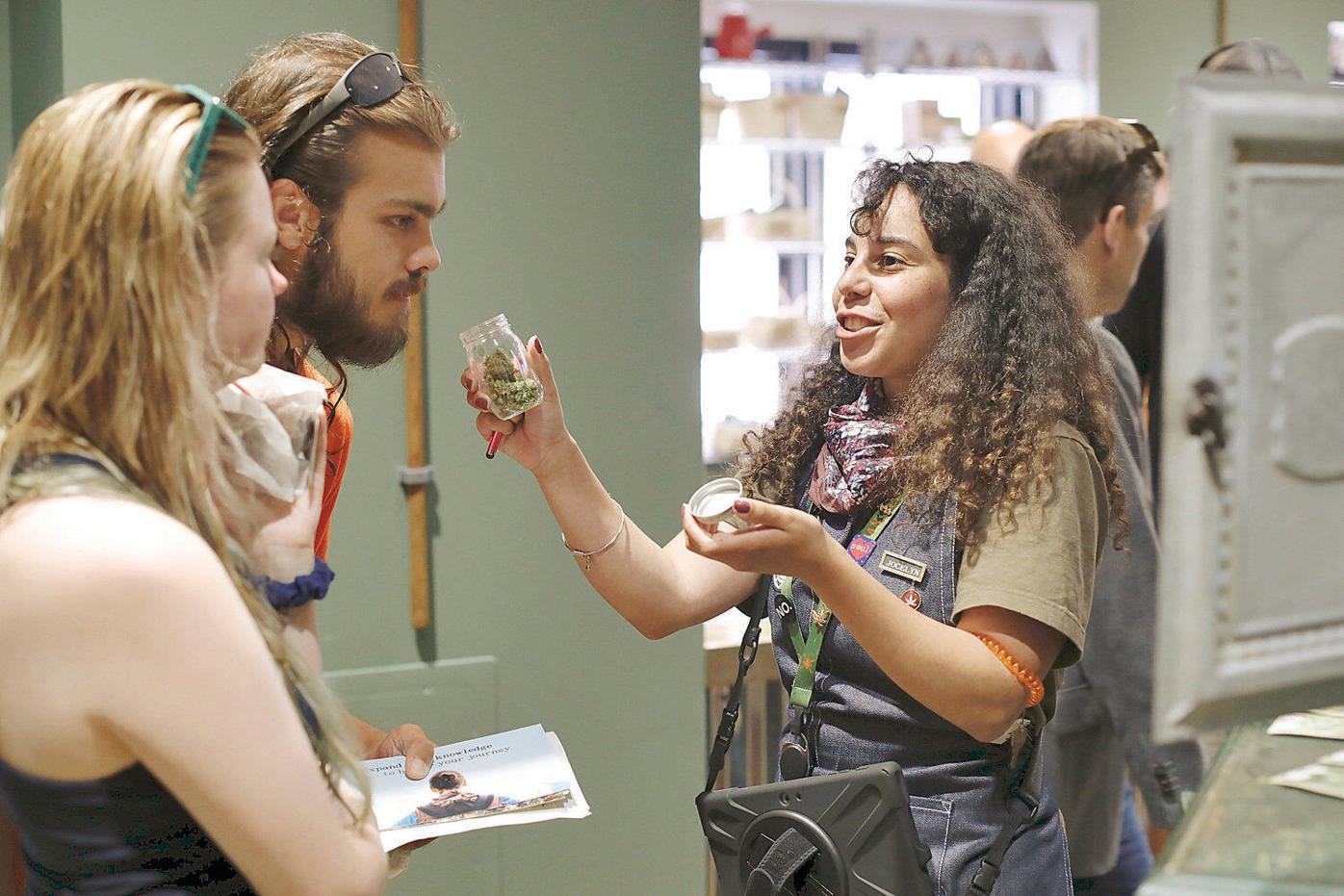 Jocelyn Moody, a cannabis "guide," lets Vincent Gironda and Kristin Heenan smell some product Friday, during opening day of Canna Provisions, Lee's first recreational marijuana shop. The shop, which is decorated to honor the culture of the Berkshires, is the fifth recreational dispensary to open in Berkshire County.

Business is brisk Friday, during opening day of Canna Provisions, Lee's first recreational marijuana dispensary. The management team attributed the fast and fluid service to the way staff is assigned to different duties in the store.

Jocelyn Moody, a cannabis "guide," lets Vincent Gironda and Kristin Heenan smell some product Friday, during opening day of Canna Provisions, Lee's first recreational marijuana shop. The shop, which is decorated to honor the culture of the Berkshires, is the fifth recreational dispensary to open in Berkshire County.

LEE — The town's first cannabis dispensary is Berkshire vibes inside and out.

Canna Provisions kicked off its first day in business Friday with a ribbon-cutting in the morning, followed by a steady flow of customers throughout the afternoon. Those in line were given complimentary Bartlett's Orchard apple cider doughnuts to enjoy while they waited, which wasn't long.

"We're really trying to make sure people waiting are entertained and informed," Andrew Katkin, head of marketing for the company, said about 1:30 p.m. "There's been a line outside all day, but it's moving quickly."

The shop, which is decorated to honor the culture of the Berkshires, is the fifth recreational dispensary to open in Berkshire County. While Chief Operating Officer Erik Williams had prepared for the Independence Day weekend opening to bring heavy traffic to the area — he arranged for nearby overflow parking — finding a space in the shop's lot was not a problem.

The management team attributed the fast and fluid service to the way staff is assigned to different duties in the store.

Unlike many shops, where customers order from the counter and are checked out by the same person, Canna has an almost assembly line style — a different staff member services each step of the customer's experience in the store.

After customers enter and have their identification checked, they individually are greeted by a "guide" who educates them on the different products. Inside the store, a map of the Appalachian Trail covers the walls, and Berkshire County antiques are used as wall hangings and display shelves.

As the guide shows customers around the shop, they spend as much time as they need to answer questions.

Then, their electronic order ticket is passed to a different crew of different staff members, who pick the products from behind a counter and package them. A third person then will check the customer out.

Since each of the 43 full-time staff members has been trained for months on the design and setup of their station, customers are able to move along quickly, CEO Meg Sanders said.

The experience with the guide, though, isn't rushed, because the staff understands that most of the customers are new to the dispensary experience, so they take the time to educate them, Williams said.

"We've really set this up so you have a more intimate experience than most other dispensaries," Katkin said.

Some customers were in and out of the shop within three minutes, while others spent up to 25 minutes learning about the store and its products.

Ryan Attenson, from Fort Lauderdale, Fla., said that he spent about 20 minutes picking out products.

He and his wife, Wendi, never had been to a dispensary before and decided to visit Canna Provisions to "see what the big rage is all over the country."

"We're in the Berkshires on vacation," said Attenson, 59. "For someone like me, that's older and doesn't know a lot about stuff, they're super helpful."

Attenson purchased raspberry gummy chews and tincture to help with his wife's pain while they hiked this weekend. "I wish they were able to sell T-shirts," he said.

Flower and chocolate bars were the most popular products Friday, the management team said.

Williams and Sanders had planned to open three months ago. Thus, staff, who have been working since March, have had extra time to train and engage in customer service in the region.

The team said that it has been fun to watch the staff, many of whom are brand new to the industry, learn about the products and business and finally spring into action Friday.

"They're working on getting their confidence up," Sanders said.

She and Williams have a combined 19 years of experience in the industry, having opened shops across the country.

"I am more proud of this team than any other team I've ever worked with," Williams said.

He said that while the layers of regulations and requirements to get a dispensary up and running might be frustrating at times, it's a positive way to ensure that only professionals capable of running a cannabis business can make it into the industry.

"A lot of people are really good at writing applications," Sanders said. "But taking those pieces of paper and turning them into this is a very unique skill set."

Being at the forefront of the industry, the team already has seen so much change in terms of how states and municipalities accept incoming businesses. Going forward, though, they hope that there is less of a stigma around cannabis and an ease in regulations as to how the companies can advertise.

"It's shocking to me that this beautiful flower in this can is so offensive," Sanders said.

Josh Cohen, who owns and operates Moe's Tavern and has been a supporter of the business through the permitting process, was one of the first customers in the door after the ribbon-cutting. When reached by phone, he said he didn't have time to fully shop there Friday — he intends on returning — but he grabbed a vape pen and flower during his visit.

He said he has been following the opening of dispensaries throughout the county from the beginning and is happy to see a business come to Lee that is open seven days a week.

"I did get a doughnut on my way out, and I gave it to my kids when I got home," he said. "Amazon isn't going to come here any time soon. This is the industry we have to play with right now, and I think that's really cool."