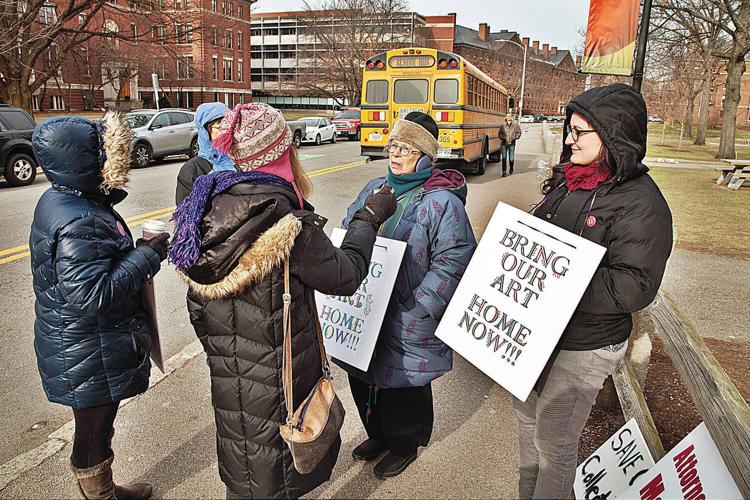 Sara Clement, right, and Linda Kaye-Moses, beside Clement and also holding a sign, speak at the Save the Art-Save the Museum sidewalk rally in Cambridge on Friday. 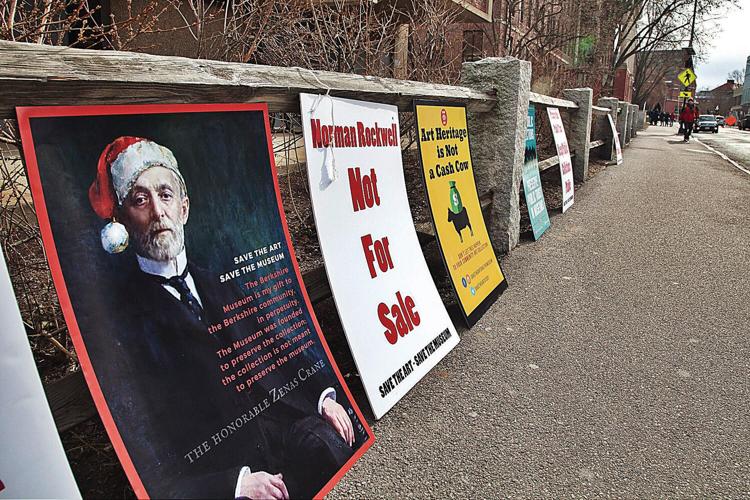 Members of the group Save the Art-Save the Museum took their campaign against the Berkshire Museum's planned sale of 40 artworks to Cambridge on Friday. They rallied outside a workshop held at Harvard University about deaccession titled "Don't Raid the Cookie Jar: Creating Early Interventions to Prevent Deaccessioning Crises."

Sara Clement, right, and Linda Kaye-Moses, beside Clement and also holding a sign, speak at the Save the Art-Save the Museum sidewalk rally in Cambridge on Friday.

Members of the group Save the Art-Save the Museum took their campaign against the Berkshire Museum's planned sale of 40 artworks to Cambridge on Friday. They rallied outside a workshop held at Harvard University about deaccession titled "Don't Raid the Cookie Jar: Creating Early Interventions to Prevent Deaccessioning Crises."

Opponents of the Berkshire Museum's planned art sale say a new state law is needed to safeguard vulnerable collections, a step that widens their focus from the Pittsfield dispute as the issue gains national attention.

They took their argument, and signs, to a Cambridge sidewalk Friday, hoping to persuade museum professionals gathered for a workshop on the same subject to join the cause.

Members of Save the Art-Save the Museum held what they termed an informational rally on Oxford Street, outside the Harvard Museum of Natural History. Inside, dozens of museum professionals gathered Thursday and Friday to talk about ways to protect museum collections from improper deaccession.

The workshop was sponsored by five museum groups and designed to help museum professionals find alternatives to selling works from their collections. The goal, organizers said, was to create an "early warning system" giving museums options in the face of financial crises.

It followed an Oct. 27 forum on the subject called by the New England Museum Association.

Save the Art members arrived early Friday, eager to catch participants arriving for the program's second day and wrap-up.

"It was one of the ways that we felt our words could be heard beyond the Berkshires," said Linda Kaye-Moses, who joined Friday's rally. "We're trying to establish some kind of legislation in Massachusetts. This is just beginning to germinate within our group."

The Berkshire Museum announced July 12 that it would sell 40 works, including two paintings by Norman Rockwell, in order to raise as much as $60 million to insulate it from money problems.

But the museum is fighting a challenge by Attorney General Maura Healey, who won a preliminary injunction Nov. 10 that halted the first four planned auctions. The sales remain in legal limbo.

The state contends that the museum needs court approval for the sales. The institution's board says it is free to make its own decision about the collection.

The museum profession's stance is expressed in the name of this week's workshop: "Don't Raid the Cookie Jar: Creating Early Interventions to Prevent Deaccessioning Crises."

The American Alliance of Museums, which co-sponsored this program, censured the Berkshire Museum for its planned sale. Proceeds from selling works from a museum collection, the alliance says, can only be used for the direct care of a collection.

Michael Morin, a former Pittsfield resident who lives in Newton, obtained permits for the Cambridge rally.

He said by telephone that he helped organize the rally because he believes the art sale by the Berkshire Museum, founded in 1903 by Zenas Crane, is not in the nonprofit's best interests. He likened the deaccession to a recent action by President Donald Trump to scale back the size of the Bears Ears National Monument in Utah and the Federal Communications Commission's decision Thursday to end rules on "net neutrality."

If the Berkshire Museum prevails in current litigation and brings 40 works to auction, Morin and others believe that will encourage people who run other museums to follow suit.

"If this is legally sanctioned, it will happen in other places," he said of the Pittsfield museum's sale.

Locally, he mourns the possible loss of the institution's greatest fine art objects, recalling the efforts Crane took to put the city on the map.

"It rivaled some of the great museums in New York and Boston," Morin said of Crane's creation.

Another rally participant, Sara Clement of Pittsfield, said the Save the Art group is interested in broadening its work. She believes that the proposed deaccession would have repercussions throughout the field.

"I think it's a slippery slope. It could set a precedent," Clement said as she stood outside a museum that is home to one of the state's most significant natural history collections.

She hoped that people visiting the Harvard session would be primed to listen.

"We're trying to plant the seed in their minds that this could happen to them and in their communities," said Clement, who works in historic preservation and was involved with the Preserve Pittsfield campaign a year ago, when voters backed adoption of the Community Preservation Act.

"We could turn this situation into something amazing. Massachusetts could lead the way," she said of a proposed law. "Instead of just being an ethical standard, it could be a legal one."

Clement said she regrets that the museum issue has divided the community. She said the Save the Art group wants what's best for the museum.

"You're seen as troublemakers and boat-rockers, but you have to follow your own moral compass," she said.

This week's event at Harvard was closed to the news media.

In a statement, the American Alliance of Museums and the Association of Art Museum Directors applauded Save the Art members for "supporting the standards of the museum field. We agree that museum collections are held in the public trust and must not be treated as disposable financial assets."

The statement said the groups "remain willing and available to work with the Berkshire Museum to identify and support the implementation of alternatives to the sale of collections that they are currently pursuing."

Other sponsors of the workshop were the American Association for State and Local History, the Association of Academic Museums and Galleries and the New England Museum Association.

The session the New England association called in October discussed what organizers called "The Deaccessioning Dilemma: How Can We Support Standards AND Museums in Crisis?" About 140 people attended.

In a newly released report on that forum, the association said participants explored current ethical standards in the field and other issues.

Participants worked in small groups to fashion possible solutions to the dilemma. According to the report, those steps include:

- Training board members in museum practices.

- Helping the public better understand how museums operate and the struggles they face.

- Identifying groups of outside experts that can help boards address problems, particularly financial ones.

- Exploring how museums should weigh the option of closing.

- Relaxing standards to allow deaccession, in light of "shifting" paradigms and visitor tastes.

- Finding alternatives to auctioning off works, including finding sponsors willing to buy and donate works back.