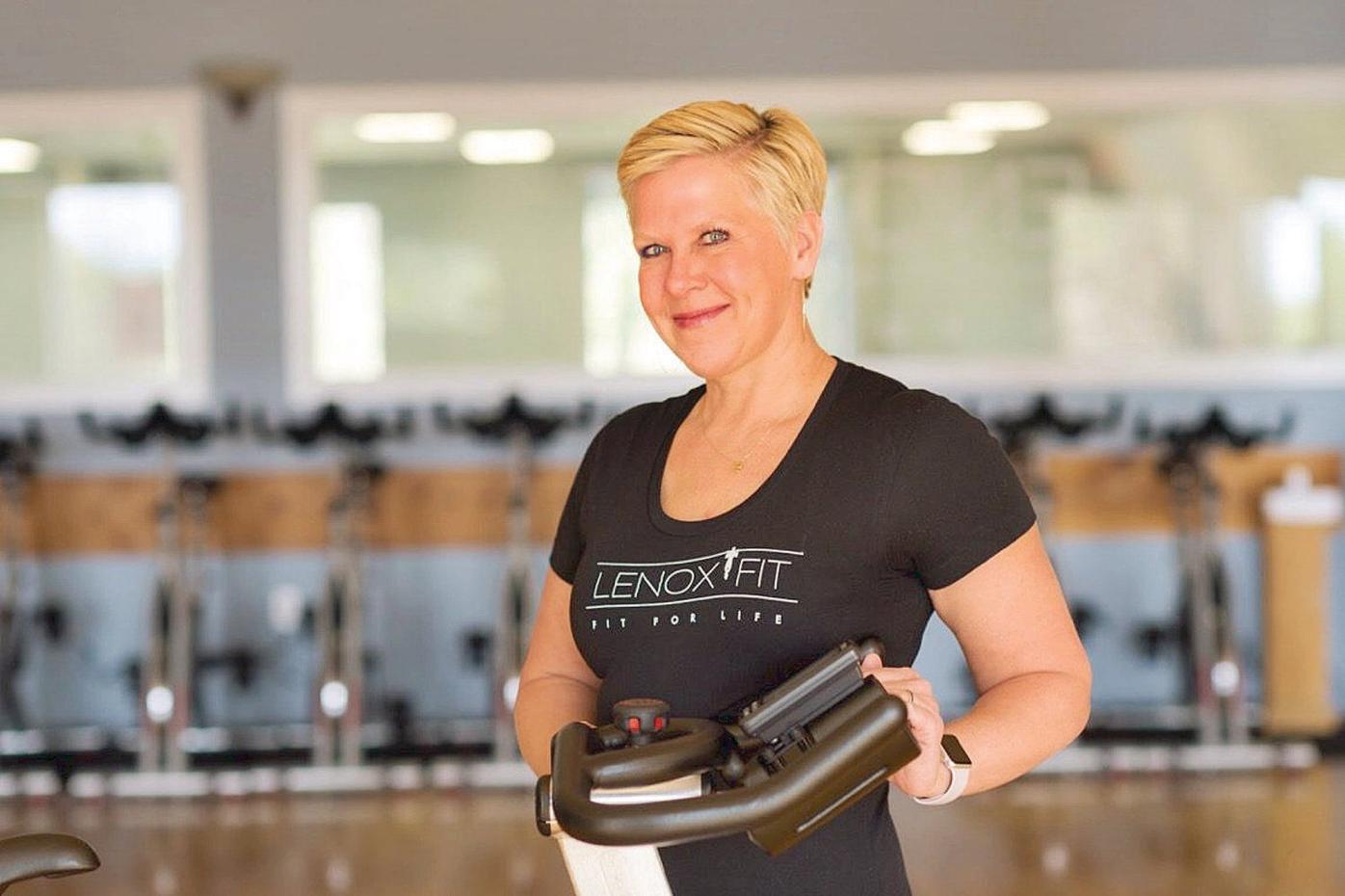 Suzanne Merritt, president of Lenox Fit, has been named the U.S. Small Business Administration's 2019 Woman Small Business Owner of the Year for Massachusetts. 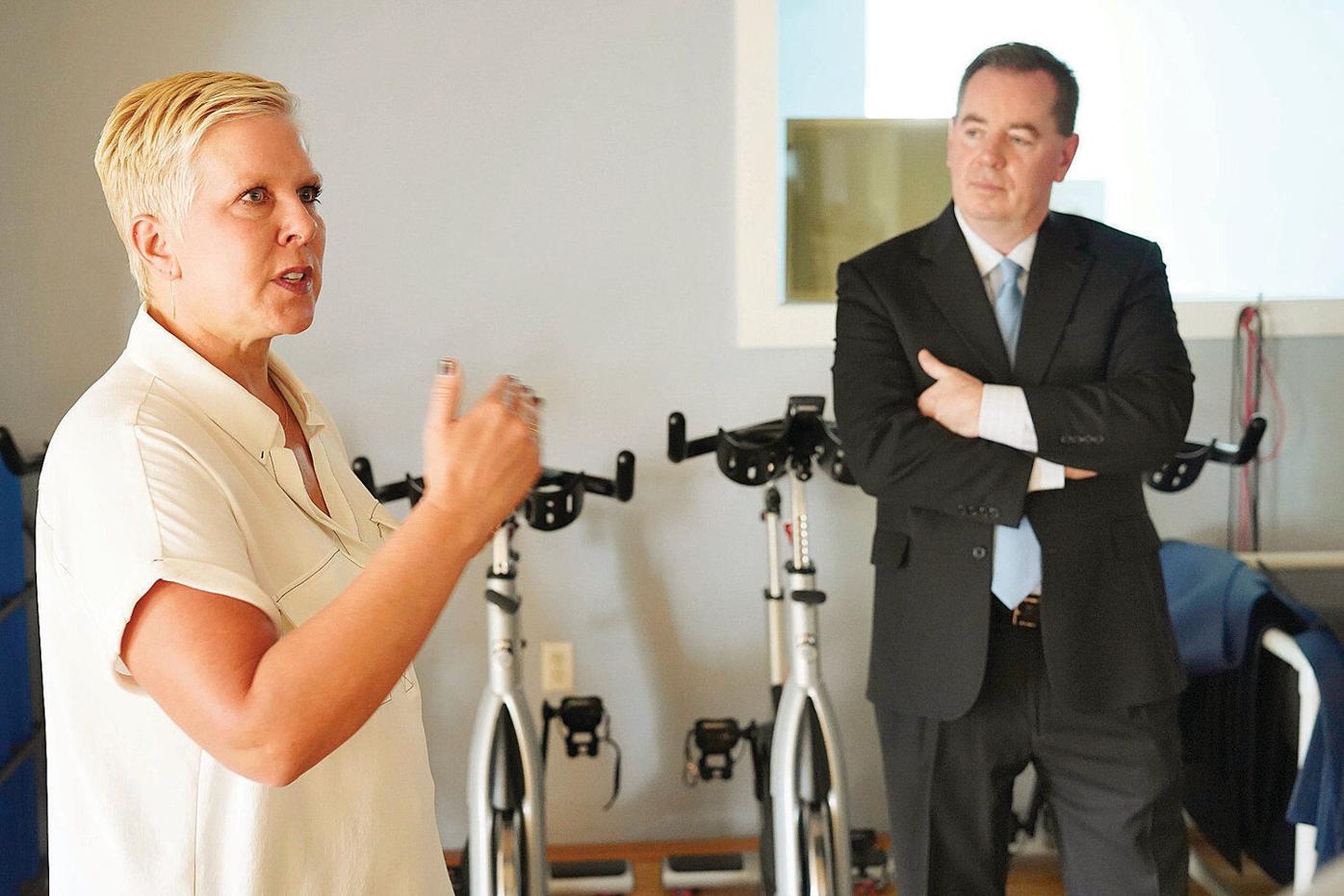 Suzanne Merritt, president of Lenox Fit, speaks with Wendell G. Davis, regional administrator of the U.S. Small Business Administration, during a site visit in September. Merritt has been named the group's 2019 Woman Small Business Owner of the Year for Massachusetts.

Suzanne Merritt, president of Lenox Fit, has been named the U.S. Small Business Administration's 2019 Woman Small Business Owner of the Year for Massachusetts.

Suzanne Merritt, president of Lenox Fit, speaks with Wendell G. Davis, regional administrator of the U.S. Small Business Administration, during a site visit in September. Merritt has been named the group's 2019 Woman Small Business Owner of the Year for Massachusetts.

Merritt, who purchased the gym at 90 Pittsfield Road (Route 7/20) on the last day of 2014, has renovated and expanded the facility into a center for fitness and wellness, catering not only to fitness buffs and advanced athletes, but also to customers seeking rehabilitation or post-rehab benefits from physical therapy.

The business has notched a 28 percent revenue increase since she bought it, Merritt told The Eagle in a recent interview, with over 700 year-round and seasonal members. The annual fee for newcomers is $425; $465 for renewing members.

Not content to rest on her laurels, she is working with Lee Bank on a new project to expand services this year, representing a major personal investment. Details will be announced after the deal is sealed.

He noted that in 2012, Merritt was diagnosed with aggressive breast cancer, receiving treatment at the Dana Farber Cancer Institute in Boston for over a year while maintaining her job as a personal trainer at the fitness center, owned at the time by Robert and Audrey Hart.

While making a full recovery, she offered to buy the business, a deal completed Dec. 31, 2014, for $850,000, financed by Lee Bank, with follow-up financing from the SBA and BDC Capital, a New England private economic development company. Merritt's capital improvements totaled an additional $200,000.

Competing for the 2019 award began with a phone call late last summer from Lee Bank, Merritt recalled, alerting her to an upcoming SBA tour of small businesses it had funded in the Berkshires.

"The SBA brought their team from Boston for a site visit, along with representatives from the Massachusetts Small Business Center in Pittsfield, to see what has happened here in four years," Merritt said. "It was the first time I had been able to show the business off to them with all the improvements we've made, and talk about future improvements."

At the suggestion of an SBA member, she prepared a detailed, 40-page application to support her nomination for the Woman Small Business Owner of the Year Award. The nomination was submitted by Nancy Shulman of the Massachusetts Small Business Development Center in Pittsfield, an extension of the University of Massachusetts-Amherst's Eisenberg School of Management, to promote entrepreneurial spirit in the state through the SBA, Merritt said.

The nomination package included information about her finances, employees, community activities, philosophy, and short-term and local-term goals, she noted, as well as "any hardships, adverse situations I faced as a business owner and how I remedied them."

Merritt also had to submit testimonials and letters of recommendation from professionals in the community as well as from people with a personal interest in Lenox Fit.

"I had to compete for it against many nominees statewide," she said. A few months ago, she also became a "strategic sales partner" at Lenox Fit for Lululemon, an elite fitness clothing brand. Thanks to the parrtial federal government shutdown in late December and early January, there was time to update her nomination application "to show the continued growth, movement and trajectory that we've been on since we opened," Merritt said.

On March 18, she received a very welcome phone call advising her of the award.

"I was quite excited, I couldn't believe it," Merritt said. "It's a real feather in my cap; I've worked hard to put this place on the map and represent it the way it should be in the Berkshires, and all the personal toll and sacrifice I've put into this place."

"I think it's a much more comprehensive business than when I first took it over," Merritt said. "I've put a lot of my own capital back in to not only aesthetically change it, but bring in new, more modern things and offerings to people."

Her goal is to continue developing "a real comprehensive approach to fitness and wellness. When you have a lot of different pieces that work well for people, then they will have a menu of choices for the best options for them."

"There's no `one size fits all,' " Merritt said. "I can have a high school kid working out here and then I can have somebody who's in their 80s to come in and find a piece of equipment. We really feel we've got something for everybody."

Each year, she participates in the annual Pan Mass Challenge bike-a-thon, personally raising nearly $100,000 in the past seven years for cancer research at Dana Farber. She also is involved with the local Relay for Life campaign, mentoring other cancer patients and offering guidance from her personal experience.

On May 8, she will be honored at the annual SCORE Boston/SBA awards luncheon at Assumption College in Worcester, along with 2019 Massachusetts Small Business Week winners.