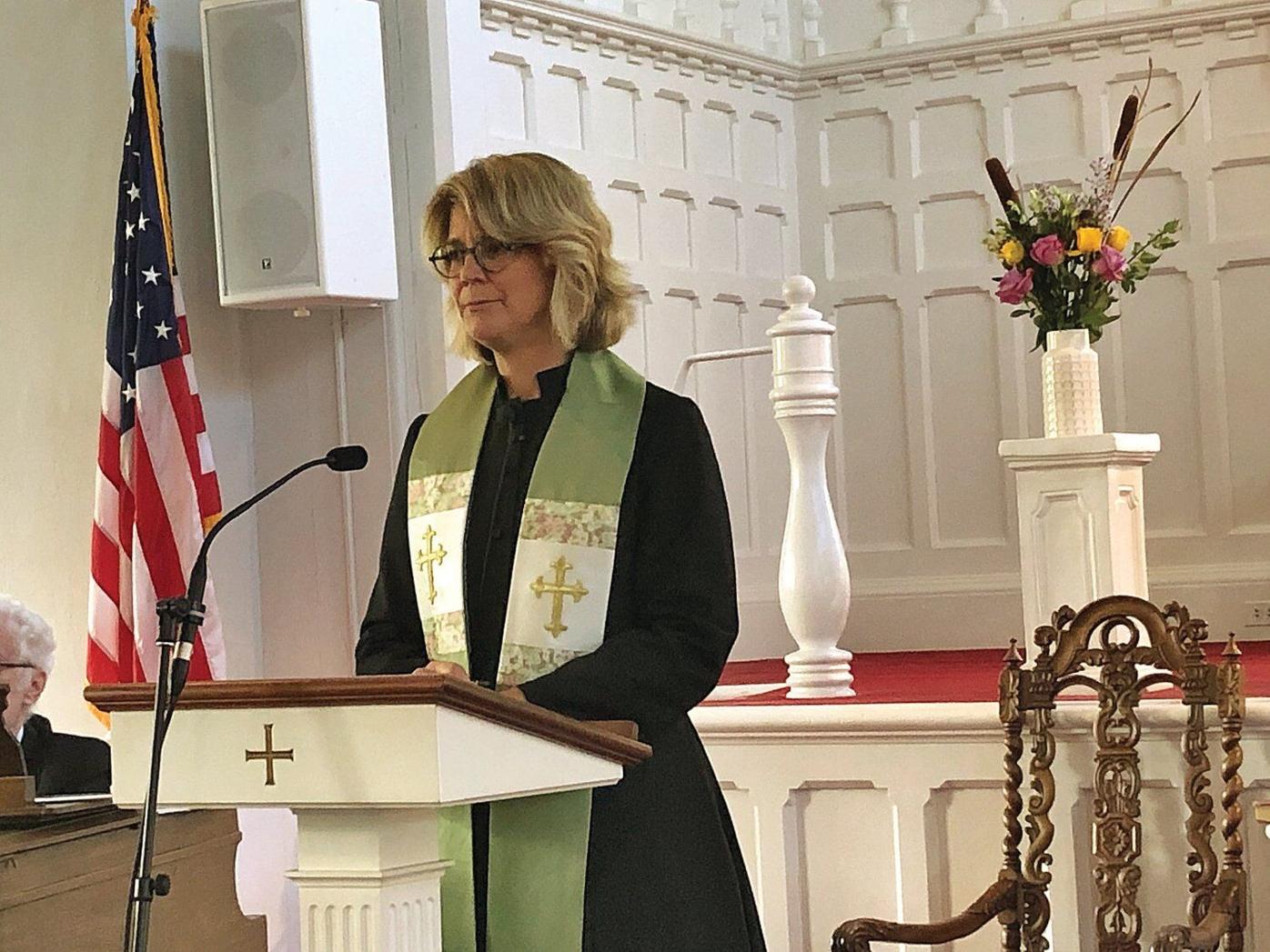 The Rev. Liz Goodman, newly appointed pastor of the historic Church on the Hill in Lenox, delivers a sermon on Sunday. 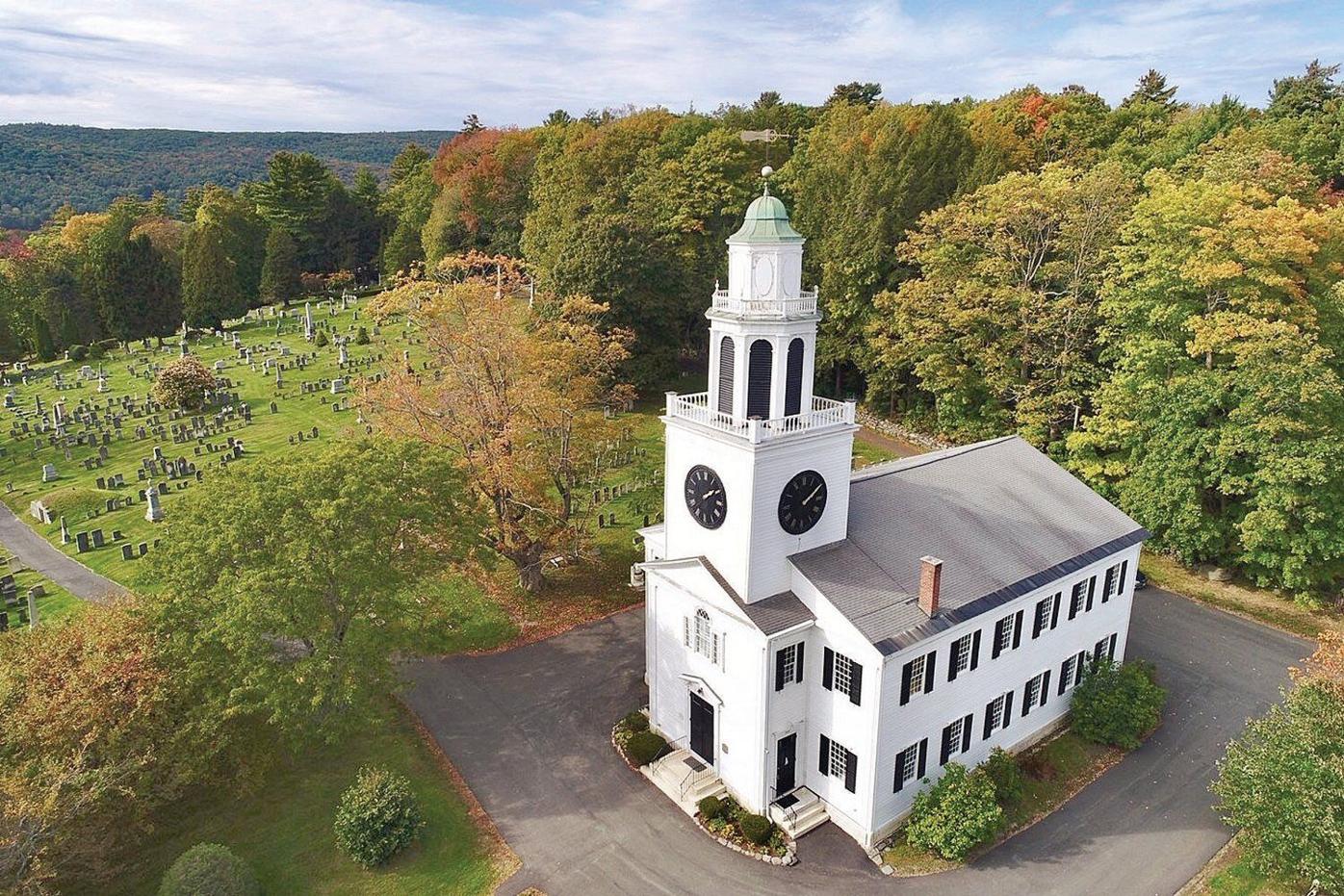 Leaders of the Church on the Hill in Lenox have organized a Christmas Eve virtual singalong to raise money for restaurant servers who are struggling amid the coronavirus pandemic.

The Rev. Liz Goodman, newly appointed pastor of the historic Church on the Hill in Lenox, delivers a sermon on Sunday.

Leaders of the Church on the Hill in Lenox have organized a Christmas Eve virtual singalong to raise money for restaurant servers who are struggling amid the coronavirus pandemic.

LENOX — It's the community's oldest church, "gathered" by early settlers in 1767 at their first town meeting after separating from Richmond to fulfill the conditions of their charter and select a meeting house.

As the forerunner of the Church on the Hill, the Congregational Church and Society was organized two years later by nine male members.

Now, in its 250th anniversary year, the church has been struggling to endure and overcome a loss of morale as members age and pass away. Several interim and short-term ministers, including the Rev. Rick Crisman and the Rev. John Nelson, have come and gone since the Rev. Natalie Shiras retired in 2015 after 12 years of service.

In order to stabilize, rebuild and survive, 31 of the estimated 50 to 60 active church members voted on Sept. 8 to hire the Rev. Liz Goodman, longtime pastor at the United Church of Christ in Monterey, based on her letter of interest and a visit by two search committee members to observe her ministry in Monterey. It's a "shared services" arrangement, since each position is half-time.

The challenge is not caused by "the viability of the church, both the people and also the physical presence of it," Goodman said in a conversation at the chapel office the day after delivering her second Sunday sermon. "I think it's because of traumas that are sneaky because you don't necessarily recognize them when they are happening." She was referring to the rapid turnover in pulpit leadership after Shiras departed.

"Those were excellent pastors, but the fact of change is really hard, especially for small congregations," she pointed out, adding another factor: At least eight prominent members of the church passed on this year, notably Robert "Bob" Brown, a former head of the trustees, who died suddenly last January.

But Goodman, upbeat by nature, stressed that, "I look around this congregation, and I don't see a problem, so if there's the feeling that something problematic is happening, we can recover from that because there's this dedicated membership and this beautiful worship space in this lovely town."

Goodman learned of the opening at the Lenox church early this year and met with members of the search committee. The church council had agreed to consider a shared ministry, said Emily Wilson, the council clerk.

"Because we're an aged congregation and we've lost quite a few major people, and it was a church community that was not growing, we felt we didn't need a full-time person," Wilson said. "But I've never heard it said that we couldn't meet our financial burden. It was tight, yes, but we were sustainable. A lot of it is a matter of energy."

"It's hard to overstate how stressful and disconcerting pastoral leadership change is in a congregation," Goodman said. Nelson's departure last February, more than a year ahead of schedule, was "very deflating to the church." For the past seven months, the congregants have been served by various preachers known as "supply clergy."

Goodman pointed out that she already felt familiar "with the life of the church, it was in my heart in a way, but it felt like I was watching from the sidelines, and I wanted to be a part of it. The more I thought about it, the more I thought this could work, with some major changes at first."

Because of her commitment to the Sunday 10:30 a.m. service in Monterey, Goodman's new "employer," a United Church of Christ affiliate since 1961, agreed to a six-month trial run for worship at the unusual time of 4 p.m in the meeting house, which was dedicated on Jan. 1, 1806, at the highest point on Main Street overlooking downtown Lenox.

The switch to late afternoon services is "difficult for a lot of people," Wilson acknowledged.

"This is kind of a try-out," Goodman stressed. "We really need to commit to it, see what it feels like as if it were permanent. But if it really doesn't work for the life of the congregation, we will try something else. I'm trying very hard not to impose my enthusiasm on people who do feel it as a lamentable, though hopeful, change of course for now."

Another experiment with Partners for Sacred Spaces, consultants hired in 2016 to consider sharing the hilltop church and the nearby chapel (built in 1877) with another organization, has been shelved following a recent $500,000 bequest from congregant William Goessel. The gift created an endowment for maintenance and operational expenses. The consultants' mission is to help congregations explore new uses for existing sacred and historical buildings and new resources, solidify their continued relevance and ensure their own sustainability.

Goodman, 48, a Lenox resident since 2001, is a native of Portsmouth, N.H. Daughter of a commercial airline pilot and a teacher, she grew up in the seacoast town of North Hampton, was baptized in the town's United Church of Christ church, and was mentored by the pastor, the Rev. Bill McConnell, whom she still consults. After graduating from Colby College in Waterville, Maine, majoring in creative writing and studying with Pulitzer Prize-winning novelist Richard Russo, Goodman, then a self-described introvert, said she "found the writing life too lonely."

During a gig as a golf course greenskeeper in her hometown, she had a personal epiphany — "this was not my life" — and stopped at her nearby church to tell McConnell that "I think I'm called to divinity school."

As a regular churchgoer, she had come to realize "this is a place where you can have intellectual pursuits and have a writing life, but it also has a built-in social life that I really needed. But I don't think it's an accident that I serve very small churches."

En route to completing her studies at Harvard Divinity School in 2000 and serving as a chaplain at the Cambridge Hospital of Harvard Medical School, she met her future husband, Dr. Jesse A. Goodman, an intern in psychiatry there. Since he was assigned to an internship at the Austen Riggs Center in Stockbridge, she filled an unanticipated vacancy at Monterey's only year-round church, starting on Sept. 9, 2001, following her ordination.

"When I started, there were seven people in the church, now we generally have 25, so I'm a `church-growth' expert," Goodman said, laughing. As for her own career path, her opportunity for a new shared ministry "felt like God's grace to fill out my vocational life."

"I love the idea of full-time ministry and I love the idea of being in Monterey as long as they'll have me," she added. "For small congregations, the secret sauce is reliability. You don't have to be innovative, fascinating or spectacular; you just have to show up. I'm there until they kick me out."

Her hope for her new congregants in Lenox is "self-giving love, wherever we find ourselves. I would love it if people feel a resilient faith and an understanding of the reality of God in our midst. I might be a fool, but I think that is appealing. There can be a lot of joy as we consider all the things that are lamentable, distressing or unjust."