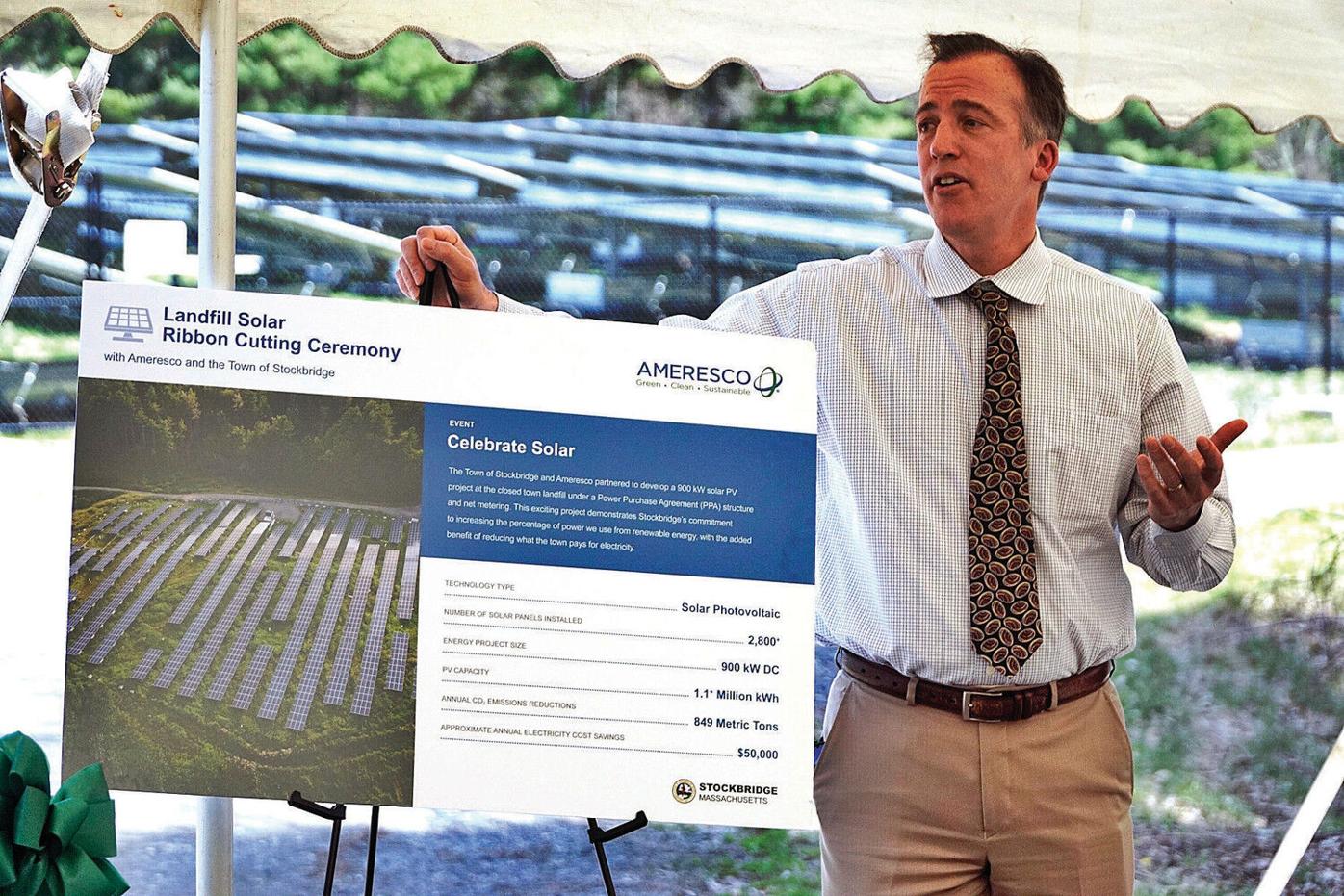 Joel Lindsay of Ameresco speaks during a ceremony in Stockbridge celebrating the completion of the solar project. The array was built for the town by Ameresco.

A ceremony in Stockbridge celebrates the conclusion of a multiyear municipal solar project installation and 900-kilowatt array.

Joel Lindsay of Ameresco speaks during a ceremony in Stockbridge celebrating the completion of the solar project. The array was built for the town by Ameresco.

A ceremony in Stockbridge celebrates the conclusion of a multiyear municipal solar project installation and 900-kilowatt array.

STOCKBRIDGE — Under a blazing sun, town leaders Wednesday toasted the completion of a solar array that is expected to generate significant savings — and income — for the town.

The 900-kilowatt Ameresco installation on the former town landfill is projected to yield an estimated $60,000 a year in electricity cost savings from National Grid and more than $1 million in combined power savings and tax revenue over the 20-year life of the solar farm.

"This exciting project demonstrates Stockbridge's commitment to increasing the percentage of power we use from sustainable renewable energy solutions, with the added benefit of reducing what the town pays for electricity," said Stephen Shatz, a former Select Board chairman who piloted the project since it was proposed in early 2015.

"This is a fantastic project, a win-win," Select Board Chairman Donald Chabon told current and former town officials gathered under a canopy with the imposing solar array looming in the background. "It takes a piece of unused land and we're using it in a productive and environmentally positive way by generating clean electricity going back into the system."

He also pointed to the Verizon cell tower installed last year on the same town property that's improving signal coverage townwide: "How can you complain about something like that?"

Chabon credited Shatz for "shepherding this; it would not have happened without you. This is a great thing, I appreciate it very much, and the people of Stockbridge do, too."

Recalling the town's first bank robbery in 80 years in March 2014 at the downtown Lee Bank branch, Shatz described how first responders lacked cellphone communication. That helped fast-track the location of the Verizon cell tower project at the former landfill, where the company built a new $350,000 access right-of-way off Glendale Middle Road.

"By my guess, this is the first solar project that has resulted from a bank robbery," he quipped. Shatz, now a Finance Committee member, credited local resident Frank Russell for spotting an article in The Eagle describing a similar solar landfill array in Williamstown, which served as a model for the Stockbridge project.

Russell researched the idea and connected the town with noted energy consultant Beth Greenblatt, managing director of Beacon Integrated Solutions. She designed the request for proposals, which led to the contract with leading renewal energy company Ameresco, based in Framingham, and Greenblatt has been riding herd on the project for more than three years.

"Beth, you're the best consultant I've ever worked with," Shatz told her. He also offered shoutouts to former Town Administrator Jorja Ann Marsden, the current administrator Danielle Fillio and his former Select Board colleagues Deborah McMenamy and Charles Gillett for supporting the project as well as the current selectmen Chabon, Ernest "Chuckie" Cardillo and Terry Flynn.

Representing Ameresco, described by Shatz as "a very good partner for the town," was Joel Lindsay, solar project development director for the company, which constructed the array between October and December 2016.

"We're very proud to be associated with this project; it's been a long and a bit of a bumpy road," Lindsay said. "The town leaders' vision really made a difference. The array is a combination of environmental and financial benefits. It's a great step taken by the town and we're looking forward to a long partnership. We'll be here, operating it."

During a tour of the 3.5-acre solar farm, Lindsay explained the town pays the company based on kilowatt-hour consumption, with savings distributed back to Town Hall accounts by National Grid based on the cost difference between what the town buys from the company and the more valuable net metering credits it gets from the utility. The facility began pumping out solar power Feb. 16.

Shatz credited National Grid "for permitting the connection through the town property to their substation. They finally saw the light through the woods," a reference to a pathway cleared for that connection through woodlands south of the installation, avoiding a lengthier route that would have disrupted part of the Glendale neighborhood.

The town's facilities manager, Chris Marsden, supervised the project's construction on site day to day, also serving as an intermediary with the state Department of Environmental Protection, which regulates capped landfills. and "a very effective conciliator with neighbors," Shatz pointed out. "We thank the neighbors for their understanding."

Marsden praised residents Clover and Nick Swann for allowing the town to use a piece of their property abutting the cell tower and solar site: "Without this, neither one of these projects would have been possible."

The solar array includes more than 2,800 photovoltaic panels designed to generate more than 1.1 million kilowatt-hours of renewable electricity annually, according to data provided by Ameresco.

The company has set up an online dashboard so the town's students, parents and residents can track electricity production generated by the solar farm in real time.

"These projects are a form of alchemy," Shatz said. "In this case, we turned garbage into gold and the town will see the benefits for many years to come. It's one of those very happy results."