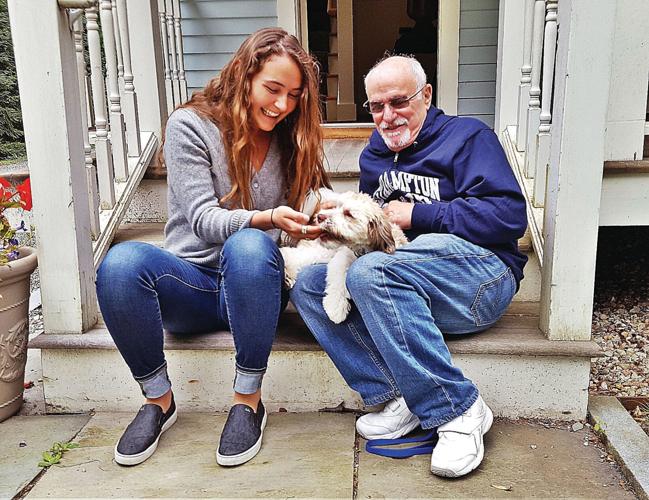 Grace Ellrodt with David Zinman and his dog, Carlito. Ellrodt found Carlito after he ran off on Sunday. Zinman is the guest conductor at the Boston Symphony Orchestra. 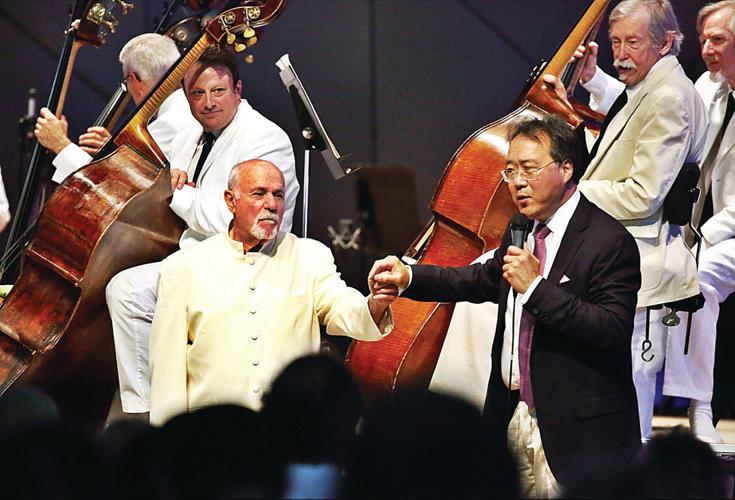 Guest conductor David Zinman of the Boston Symphony Orchestra and Yo-Yo Ma on stage when Yo-Yo Ma made the announcement about Carlito, Zinman's missing dog. 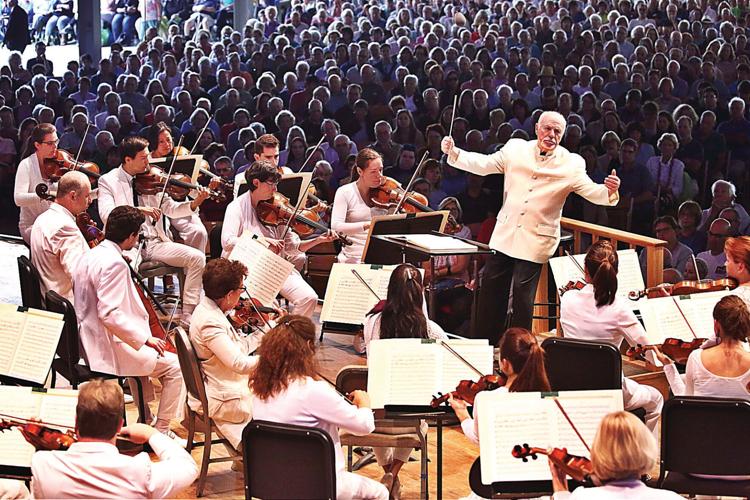 Grace Ellrodt with David Zinman and his dog, Carlito. Ellrodt found Carlito after he ran off on Sunday. Zinman is the guest conductor at the Boston Symphony Orchestra.

Guest conductor David Zinman of the Boston Symphony Orchestra and Yo-Yo Ma on stage when Yo-Yo Ma made the announcement about Carlito, Zinman's missing dog.

LENOX — It had to be a first for Tanglewood: A superstar cellist making a lost-dog appeal to a crowd of 13,924.

Yo-Yo Ma, re-entering the stage in response to the ovation following his Sunday matinee performance with the Boston Symphony, was not about to announce and perform an encore. Instead, he grabbed a microphone, telling the audience, "I never do this, so this will never happen again!"

What he did was to seek the crowd's help in finding Carlito, guest conductor David Zinman's 4-month-old Havanese puppy, which had fled after a smoke alarm went off around 9:30 Sunday morning at the Cliffwood Street house where Zinman and his wife, Mary, were staying.

Exhorting the audience to "help out, we have a problem, this is really serious, you who have animals, you know what it means, you've got to find him," Ma, with Zinman next to him, described the puppy. "Whoever is walking around in Lenox or Stockbridge, you could help out!"

Zinman, 81, a highly esteemed conductor who first led the BSO at Tanglewood in 1968 and has been Ma's friend and mentor since the cellist was a teenager, had just collaborated with him in Schumann's Cello Concerto.

"Yo-Yo took it upon himself to make the announcement," said Zinman on Monday. "I often say to him, `You are our guardian angel,' and he's always been that for me. We made him godfather of our dog. He first played with me in Rochester, when he was 16. So we've been friends a long time and we made a lot of recordings together. He's a really good person."

Zinman, a conducting student at the Tanglewood Music Center in 1960, was music director of the Rochester Philharmonic early in his career.

Just before dark, Cliffwood Street resident Grace Ellrodt, 19, her boyfriend Lachlan Tobiason and his mother, Dena Bancroft, were heading out for ice cream when they spotted and scooped up the missing puppy from the middle of Cliffwood Street near Triangle Park where, miraculously, there was no traffic passing by at the time.

"We had quite a time, running up and down Cliffwood," Ellrodt recalled. "I went inside to get dog treats, and Lach's mom, Dena, was the one who picked him up."

Hours earlier, out for a mid-afternoon run, Ellrodt had been tipped off by a passing motorist who had attended the concert and pulled over to tell her about a missing little brown dog. She had also seen the photo of Carlito that the Zinmans also posted on their car. Word had already spread through the neighborhood and the pup had become the talk of the town's many animal lovers.

Ellrodt, daughter of Dr. Gray Ellrodt, chief of medicine at Berkshire Medical Center, and Marianne Deignan Ellrodt, said she was delighted over the happy ending. The 2016 graduate of Lenox Memorial High School, where she was valedictorian, attends Bates College in Lewiston, Maine, and is interning this summer at Neighborhood for Health at Berkshire Health North in North Adams.

"We have two dogs and kind people have brought our dog back to us in the past, including one time when my brothers and I were little and our dog was gone all through the night," Grace Ellrodt told The Eagle. "We felt the same relief they must have felt, so we were so happy to have a chance to return the favor to someone else in that position."

During a reunion on the porch of the Cliffwood Street house, Carlito, securely leashed to the Zinmans, offered his Good Samaritan rescuer a grateful licking. "So happy to see you," Ellrodt told the puppy as the greatly relieved conductor gave her a big hug.

"He slept long last night," Zinman said. "He was a little traumatized, but he's OK."

Recounting Sunday morning's great escape, Zinman described how the puppy "went a little bit berserk" after the smoke detector went off while his wife was cooking pancakes. After making his escape, "he had a whole day, just wherever he was. What happened during the day, we don't know. We're so lucky he didn't get run over by a car, we thought maybe someone had picked him up."

"The whole neighborhood was so fantastic, everyone was so nice, looking for him while I had to go off and do a concert with Yo-Yo Ma," Zinman added. "As you know, people will listen to him, and he told everyone to go and do that, to find him."

But as dusk approached, the Zinmans sat waiting on their porch, despondent, fearing that the pup would be nabbed by a coyote or a fox "and will never find his way back."

"But then, you came along," he said, turning to Ellrodt. "It was really exciting for us because we thought that was it."

Carlito had been adopted from a breeder in Michigan, the conductor commented. "He was sent to us by air when he was nine weeks, we picked him up in White Plains, N.Y., drove him home to North Salem, and he's been crazy ever since. He's always in good spirits."