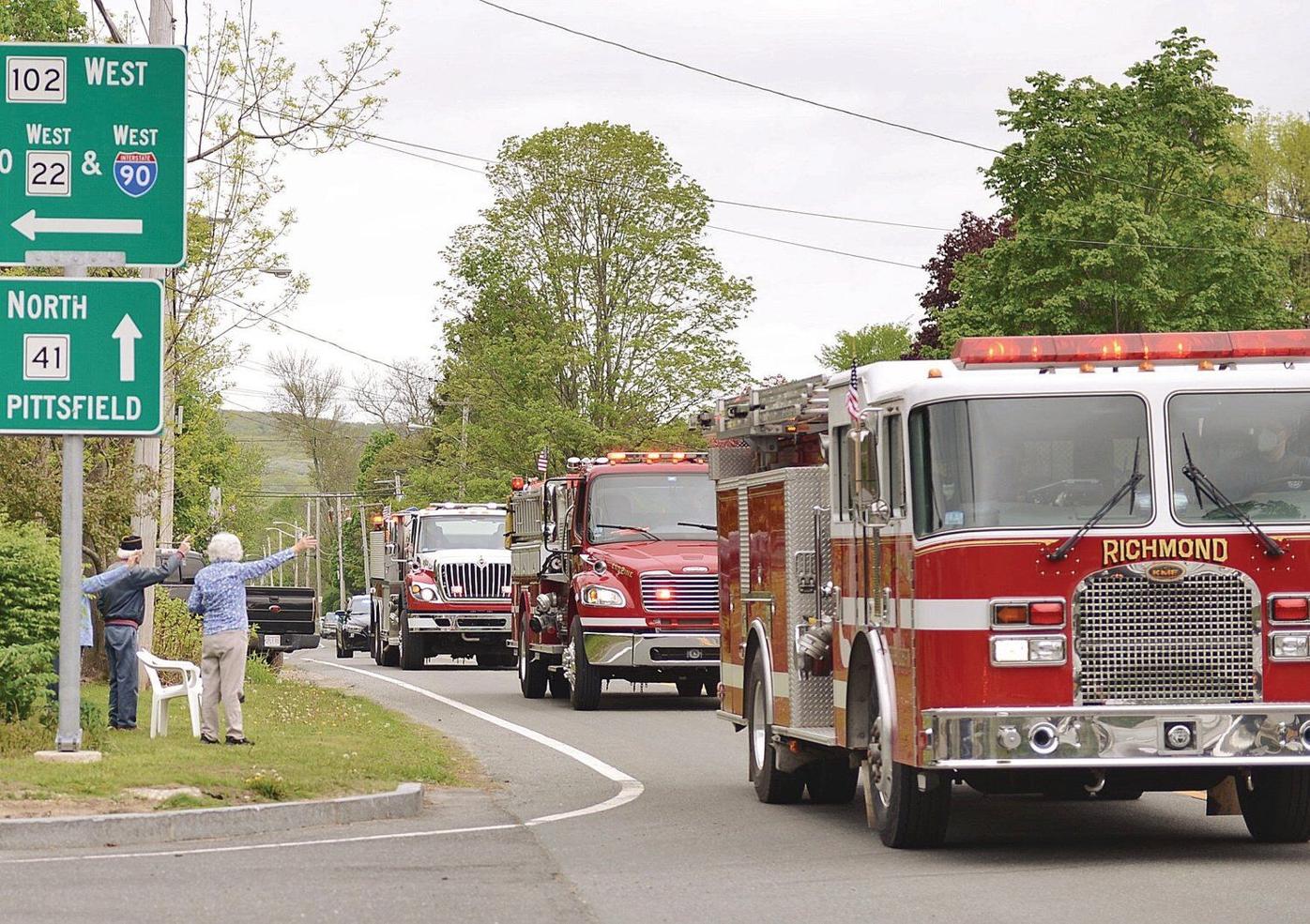 Firetrucks and other vehicles cruise through West Stockbridge on Monday for a wave parade to honor veterans on Memorial Day. 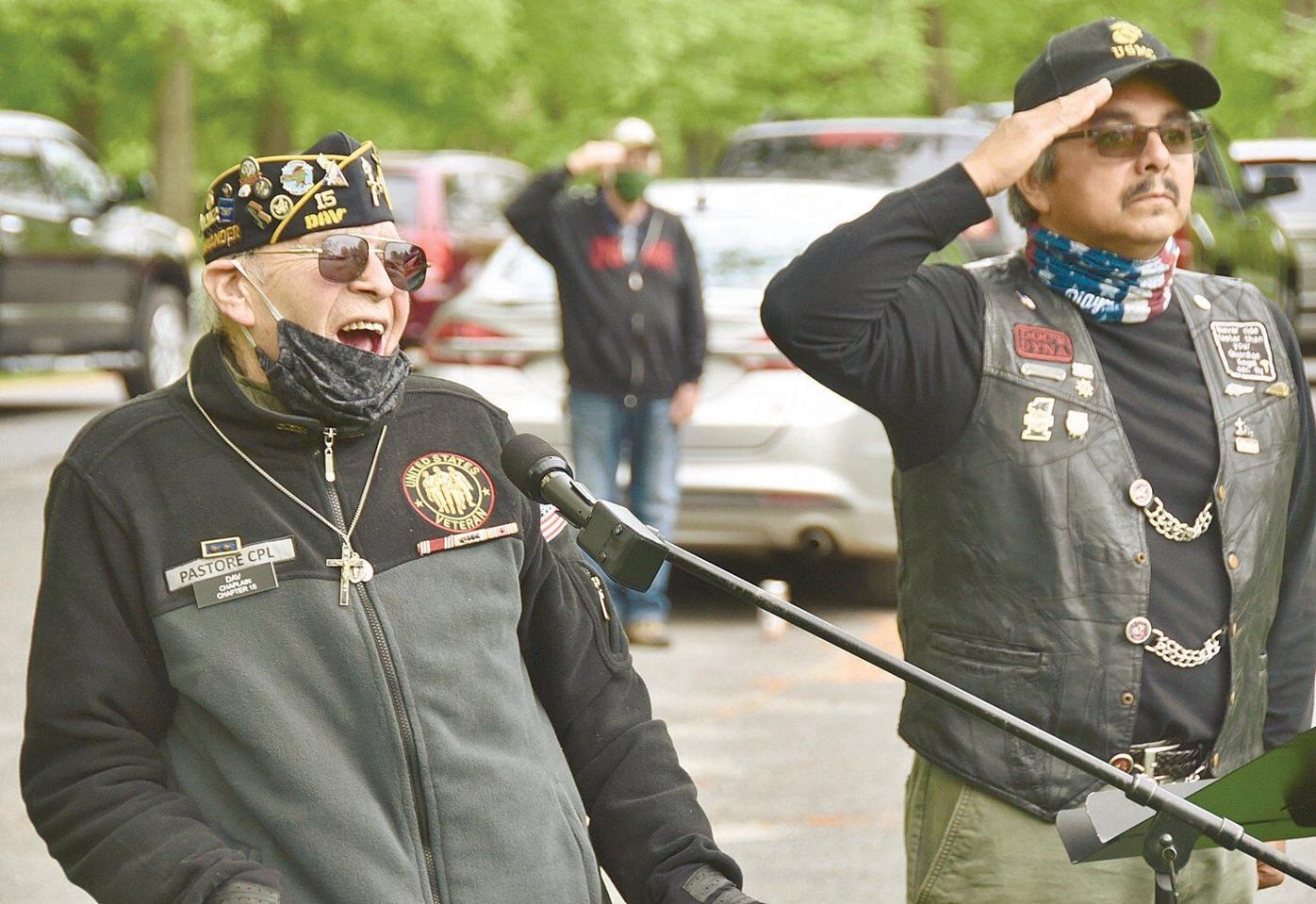 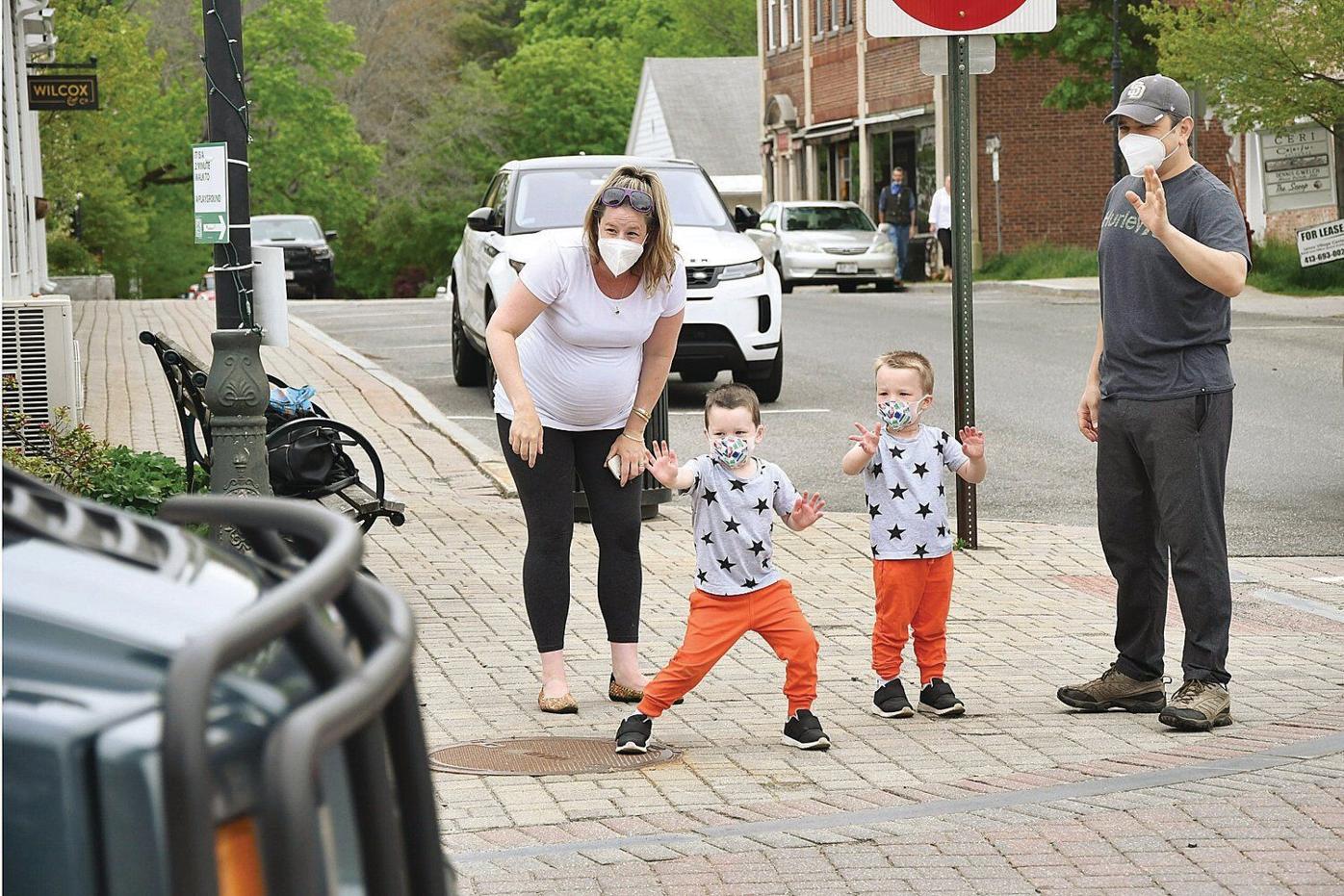 Twins Noah and Elijah Schray, 3, wave from the sidewalk Monday with their parents Kathryn and Derek as a Memorial Day wave parade makes its way down Church Street in Lenox. 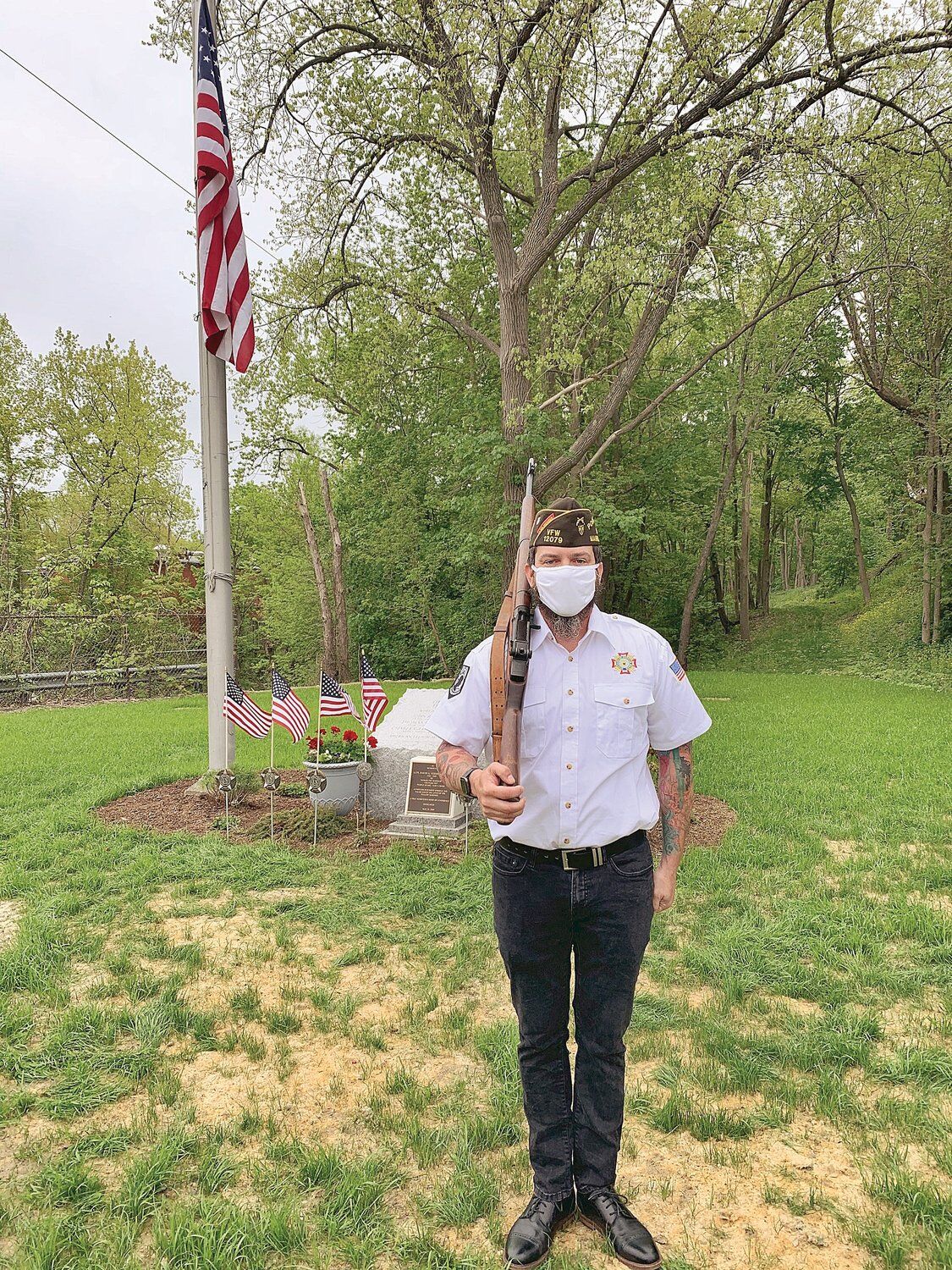 Michael King, commander of the Lenox VFW, stands at attention after Monday's ceremony in Lenox Dale. King had organized this year's ceremonies and wave parade.

Firetrucks and other vehicles cruise through West Stockbridge on Monday for a wave parade to honor veterans on Memorial Day.

Twins Noah and Elijah Schray, 3, wave from the sidewalk Monday with their parents Kathryn and Derek as a Memorial Day wave parade makes its way down Church Street in Lenox.

Michael King, commander of the Lenox VFW, stands at attention after Monday's ceremony in Lenox Dale. King had organized this year's ceremonies and wave parade.

The celebrations and remembrances may have changed, but the message remained the same.

People gathered Monday at cemeteries, street corners and parks throughout the Berkshires to honor the men and women who gave the ultimate sacrifice for their country. These events took on a different look in light of the restrictions caused by the coronavirus pandemic. Gone were the huge gatherings and colorful parades of past years. Instead, the celebrations were smaller and quieter, but for those who attended, no less meaningful.

"COVID-19 has certainly changed our lives — normally there would have been more than 100 people here to honor those who've gone before," said John Herrera, director of veterans services for Pittsfield, during his opening remarks at Pittsfield Cemetery. "That's all I'll say about COVID-19 because that's all it deserves."

Attendance at the annual Memorial Day service was limited to vital personnel only, such as the color guard and a few special guests.

After raising the flag to half-staff, with the color guard in full salute, Army Air Corps veteran Anthony Pastore, 95, lowered his black face mask and delivered a powerful rendition of the National Anthem.

Then Herrera made some remarks, thanking those who memorialize someone in their life for their service to the country.

"Take the time to honor and respect those who were lost in war," he said.

"So the question is, who are you memorializing today?" Herrera concluded.

It turns out that no one but the Veterans of Foreign Wars officers were supposed to attend. But around 75 people came anyway, masked and distanced, to honor this village's eight fallen sons.

"It was supposed to be private but word gets out," officiator Tim Sheehan said later.

People moved on to St. Ann's Cemetery to Church on the Hill, and then stood on Main Street awaiting the fighter jets that never came due to weather. All along there was talk about how the somber day of reflection truly lived up to its intention this year, thanks to a pandemic.

At Church on the Hill, the Lenox VFW fired their guns just the same, and the Rev. Liz Goodman said the soldiers have "given the most precious gift — life itself."

"We regret our reliance on war," she added, and noted these "strange" services in the age of the coronavirus.

But Michael King, commander of the Lenox VFW and a two-tour veteran of the Iraq War, suggested that remembrance of soldiers who died mostly happens in the heart.

And so went Monday's memorials in these dark days of unemployment, uncertainty and fear. All morning, convoys of firefighters and VFW members drove quietly through South County towns, most of which had private ceremonies.

"It's not as much fun as a parade, but it's more focused on what this day is about, and it's more inclusive," said Bob Gardiner, of Lenox, who served in the Army at the end of the Korean War. "I'd like to see it happen this way more often."

Down Main Street in Lenox, Kevin Lilley watched his two young sons bounce around the old cannon at Lilac Park as they awaited the wave parade and flyover.

"There's a little more respect and people are thinking more about it," Lilley said of the holiday.

The LePrevost family of Lee had settled in for the flyover of F-15 jets from Barnes Air National Guard Base. John LePrevost was an avionics instrument specialist with the Air Force who worked on those jets while stationed in Okinawa, Japan. These curtailed events are better than nothing, he said. But the usual assemblage and fanfare are also missed.

"Parades are always a good way to recognize the service people who don't get enough recognition," he said.

In West Stockbridge, instead of the traditional parade, local first responders honored those who made the ultimate sacrifice while serving in the military with a Memorial Day wave parade through the town's streets.

"I am appreciative of whatever they could do," said John Korte, a 94-year-old World War II veteran and Purple Heart recipient.

Korte, a lifelong resident of West Stockbridge, took in the parade along with the rest of the community while practicing social distancing from their yards and porches.

The wave parade was suggested by state Rep. William "Smitty" Pignatelli, D-Lenox, after traditional Memorial Day parades and ceremonies were canceled due to the coronavirus pandemic.

West Stockbridge's wave parade was roughly a half-hour tour through the town's streets, featuring a chorus of sirens and honking.

Following the voyage, which included Swamp Road, Main Street and Stockbridge Road, the convoy made its way up Route 41 to join in Richmond's wave parade.

"I got to come outside today and celebrate all the veterans I fought with," Korte said.