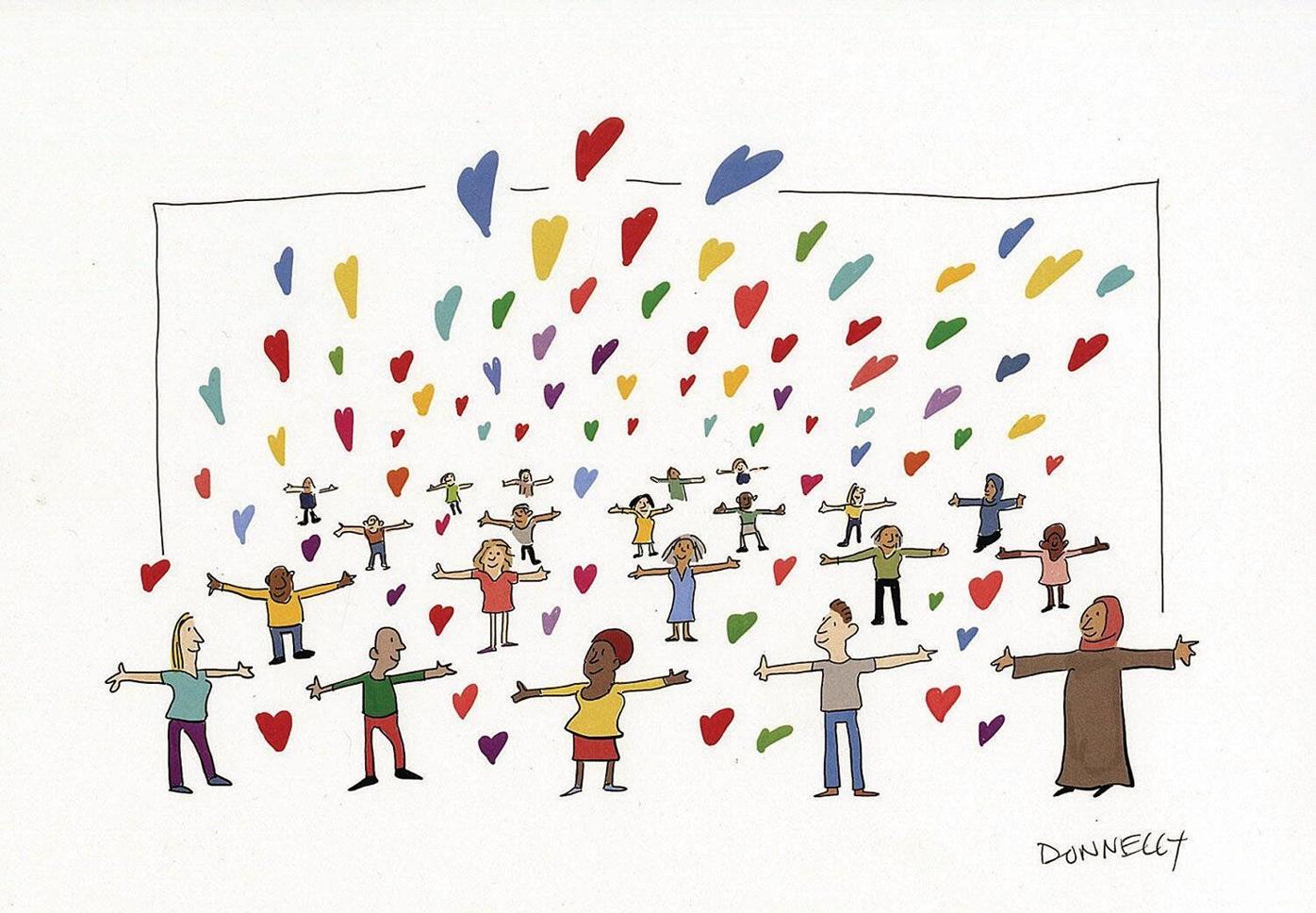 Liza Donnelly's "Love in the Time of Social Distancing," March 2020, now on display at the Norman Rockwell Museum. In discussing this drawing, Donnelly said: "Our globe is experiencing a terrible pandemic, one that is killing thousands of people of every gender, race, class, and religion. As a cartoonist, it is my role to reflect what is going on in our world; I hope to shine light for change or to bring hope." 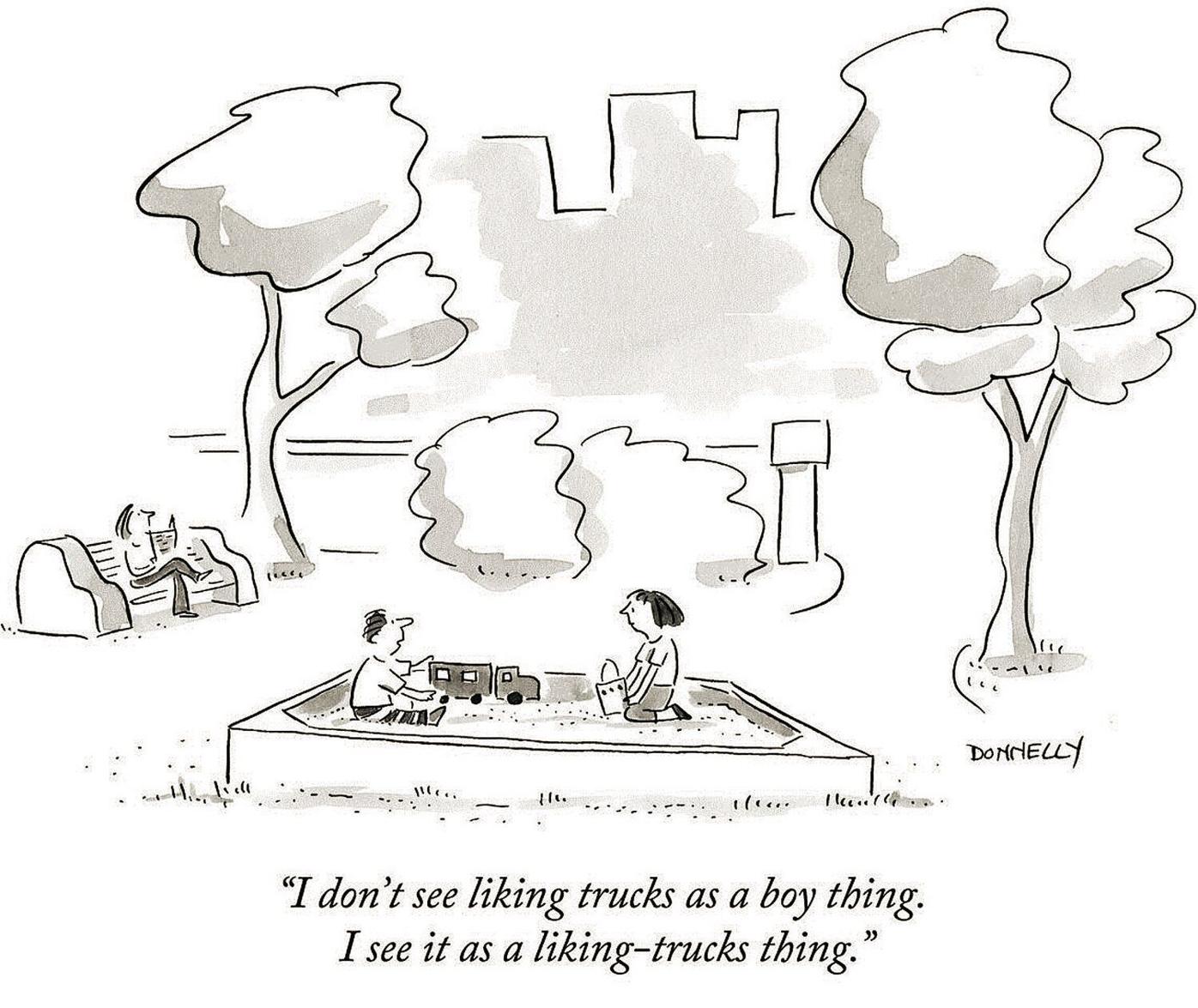 "I don't see liking trucks as a boy thing. I see it as a liking-trucks thing." 2008 Cartoon for The New Yorker, June 30, 2008. Attitudes about gender are examined in Donnelly's cartoons, which sometimes feature children as commentators. 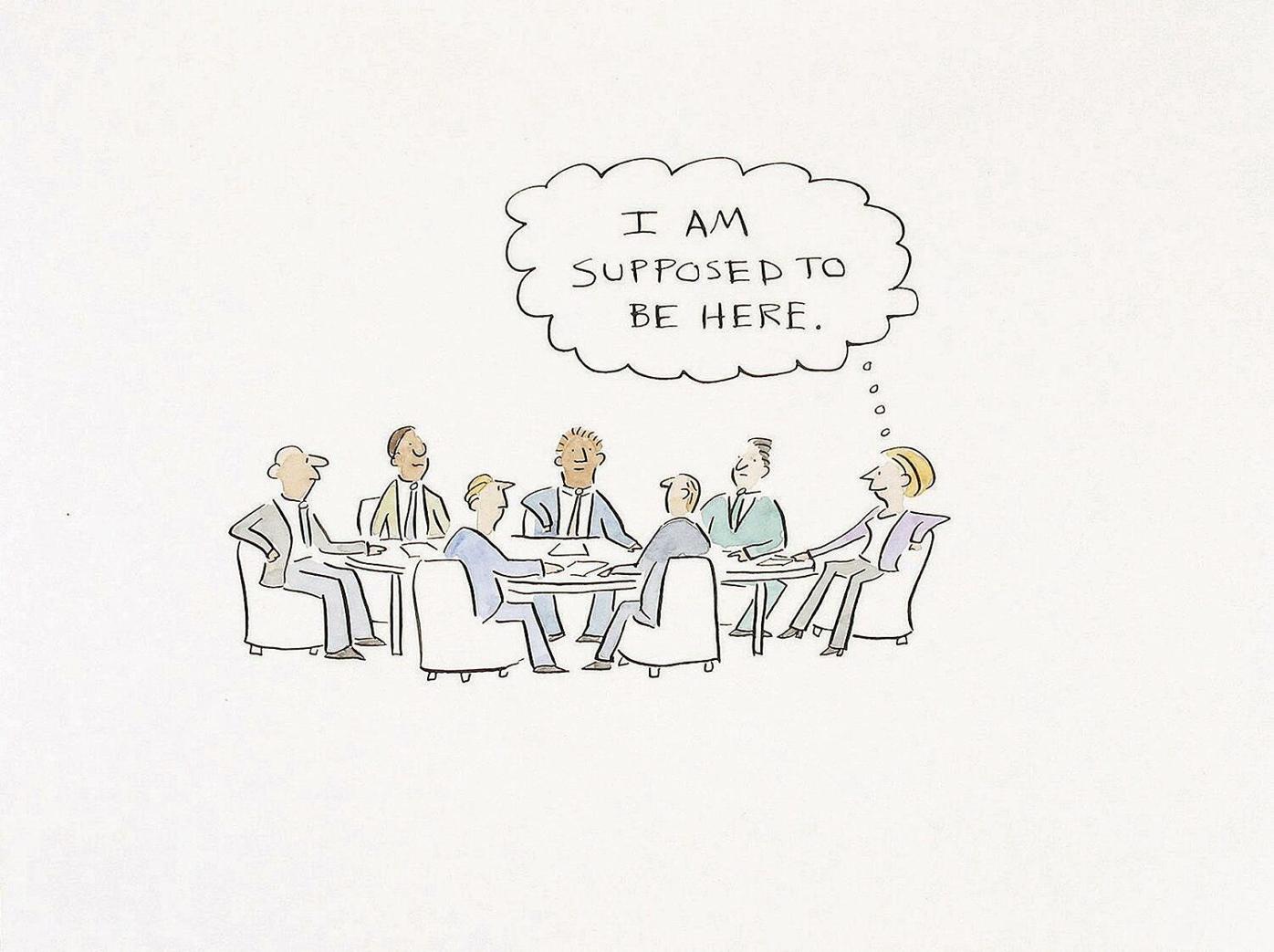 "I am supposed to be here," 2015 Cartoon for The Gina Davis Institute on Gender in Media, September 2015.

Liza Donnelly's "Love in the Time of Social Distancing," March 2020, now on display at the Norman Rockwell Museum. In discussing this drawing, Donnelly said: "Our globe is experiencing a terrible pandemic, one that is killing thousands of people of every gender, race, class, and religion. As a cartoonist, it is my role to reflect what is going on in our world; I hope to shine light for change or to bring hope."

"I don't see liking trucks as a boy thing. I see it as a liking-trucks thing." 2008 Cartoon for The New Yorker, June 30, 2008. Attitudes about gender are examined in Donnelly's cartoons, which sometimes feature children as commentators.

"I am supposed to be here," 2015 Cartoon for The Gina Davis Institute on Gender in Media, September 2015.

STOCKBRIDGE — We all could use a bit of comic relief these days. There is plenty to be had, front and center, at the Norman Rockwell Museum where an exhibit of drawings by New Yorker cartoonist Liza Donnelly is on view through Sept. 27.

In assembling "Liza Donnelly: Comic Relief," Stephanie Plunkett, the museum's deputy director and chief curator, said during a tour of the exhibit, "We wanted something that would address (current) issues in a way that included some lightness and humor. Liza is such a wonderful commentator on the world, but with a light touch."

Donnelly's figures are light and airy; feathery, often in a Jules Feiffer kind of way, which should come as little surprise. She will acknowledge the influence of her friend and colleague's style on hers; that sense of people in flight, motion. Her Live Drawing series — drawings she creates on the spot, in real time, as she has done, for example, at political conventions, the Oscars, the Tonys — have helped "loosen me up, be less tight," she said in a telephone interview from the upstate New York home she shares with her husband of more than 30 years, Michael Maslin, another New Yorker cartoonist. In one of life's sublime happenstances, they met in 1986 at a party of cartoonists. Both had been working at The New Yorker by then, but they had not met.

They made what Donnelly calls a "professional date" to go to an auction featuring an illustration by cartoonist and writer James Thurber — a major influence on Donnelly, who became a 2014 finalist for the Thurber Prize for American humor.

"We didn't buy it," she said. "We couldn't afford it. And," she added after a momentary pause, "we weren't a couple yet."

"It's fun, helpful to be married to someone [in the same profession]. It's important to be with someone who understands, is supportive, especially when you are facing an issue related to the job; when there's a problem."

They do not share their work with each other. "You want to keep your process very much your own," she said.

That process began taking shape when Donnelly was a growing up in Washington, D.C. She was, by her own reckoning, a quiet child. Her sister, she said, was "the rebellious one." When she was 7, Donnelly's mother gave her a copy of "The Thurber Carnival," a 1945 collection of the humorist-illustrator's writings and drawings. That book, Donnelly said, opened up a whole new world of possibility for her. She began creating her own world on paper.

Her drawings made people laugh, especially her mother.

"It was a way," Donnelly said, "to make people happy."

She drew cartoons for her high school newspaper and then left D.C. to attend Earlham College, an independent, private liberal arts college in Richmond, Ind.

"I wanted to get away from the East Coast," she said; plus, she added, she was attracted to the school's biology department. In 1971, she went to New York to take an internship in the art department at the Museum of Natural History. She had a gift and a passion. She returned to Earlham and switched her major from biology to art.

Donnelly made her debut as a New Yorker cartoonist in 1979. At the age of 24, she was the youngest artist to have sold a work to the magazine and one of only three women.

She was uncertain about the direction of her life but, she said, "When the New Yorker bought that cartoon, I realized I had a way of talking about the world" — poignantly at times. One of her cartoons in the Rockwell show is an ink on paper created for The New Yorker in March 2002. It shows a little girl looking up at her father, who is seated on a couch. The caption reads "Daddy, can I stop being worried now?"

Created in the aftermath of 9/11, Donnelly said the cartoon came at yet another crossroad in her life and career. "It was a turning point for me," she said.

That cartoon is among several for which time has given fresh meaning. Another, for example, shows three people on their respective apartment balconies, each holding a musical instrument. One looks down at a fourth individual, who is seated on his balcony reading a newspaper, and asks, simply, "Do you play drums?" Surely, drawn this year, you say? Guess again. It was done in 2014.

There may be a lightness to Donnelly's style, but her subject matter is anything but. The Rockwell exhibit showcases Donnelly's signature themes: relationships, particularly marriage; feminism; politics; COVID-19; Black Lives Matter; work she's done for Cartooning for Peace, an international organization of some 150 artists that has grown out of an international seminar at the United Nations in 2006. Donnelly was one of 12 cartoonists invited to participate in a panel led by UN Secretary-General Kofi Annan and French artist Jean Plantu.

"I try to make my drawings look like they are coming straight from my thinking; simple," she said. "Sometimes, I will draw something maybe 50 times to get it ... much freer."

The bulk of her work is hand-drawn — pen and ink. Her materials are displayed in a small case near the center of the gallery. But she also uses an iPad, primarily for her popular Live Drawings, her visual journalism, she calls it; work created in the moment.

"Sometimes, an idea will come out of nowhere."

She keeps her drawing pad close at hand; pages filled with doodles.

"Sometimes, words or a word comes to you," she said. "You sit with them. You imagine and [the cartoons] come to you."

"Graphic novels have changed the landscape," she said. And with newspapers disappearing, so, too, are outlets for political cartoons. The New Yorker, Donnelly said, is perhaps the only "place for cartoons."

At the same time, she said, "There has never been a better time for cartoonists. A lot of schools are teaching it. They are producing more cartoonists and they are doing a lot of innovative work online.

"It's a complicated time for cartooning. It's not easy."