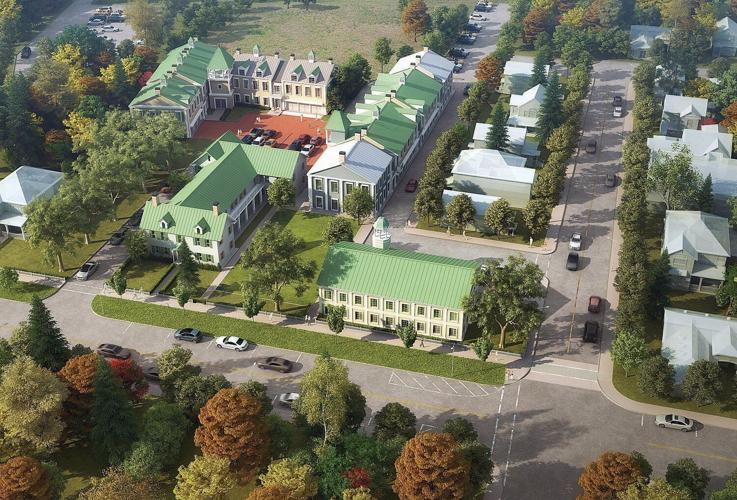 An illustration shows the proposed footprint of Windrose Place in downtown Lenox. The project, which received a special permit on Tuesday, would include 26 luxury condominiums and some commercial space. 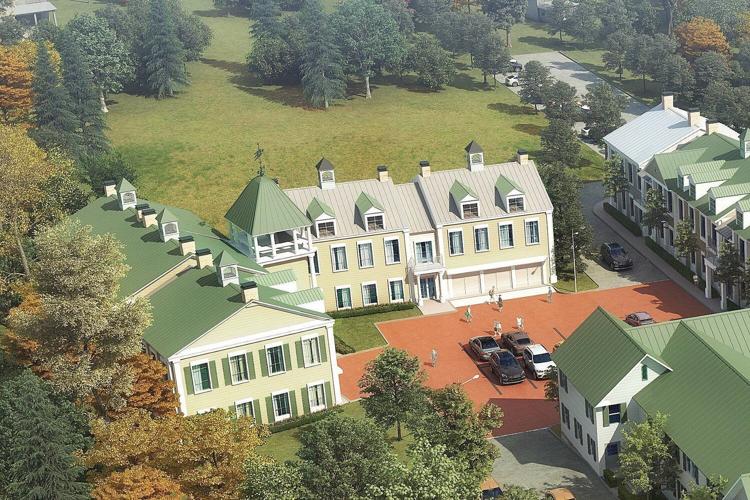 An illustration shows the proposed footprint of Windrose Place in downtown Lenox. The project, which received a special permit on Tuesday, would include three new buildings and the preservation of the 1790 Colonel Northrup house.

An illustration shows the proposed footprint of Windrose Place in downtown Lenox. The project, which received a special permit on Tuesday, would include 26 luxury condominiums and some commercial space.

An illustration shows the proposed footprint of Windrose Place in downtown Lenox. The project, which received a special permit on Tuesday, would include three new buildings and the preservation of the 1790 Colonel Northrup house.

LENOX — Windrose Place, a proposed high-end residential and commercial downtown development, has won a unanimous special permit approval from the town's Zoning Board of Appeals.

The 5-0 vote on Tuesday night cleared the way for retired marketing executive Nathan Winstanley to approach an outside developer to turn his vision for the project into reality. The board also voted 4-1 to exempt the project from a provision in the town's affordable housing bylaw, meeting the two-thirds requirement for the waiver.

ZBA member Albert Harper described the proposal as "enormously valuable, important and transformational" as a boon not only for downtown businesses but also for the entire town, thanks to a projected infusion of $200,000 to $250,000 a year in new tax revenue.

"Based on the testimony I've heard, this proposal has an enormous number of benefits to the entire town," he said, calling it "a major stimulus to the north end of the historic downtown district."

The design calls for 26 luxury residential units, with three new buildings and preservation of the historically significant 1790 Colonel Northrup house. The project, which would include a ground floor of commercial space in one of the new buildings, would cost an estimated at $15 million to $17 million investment.

Winstanley cautioned that it was difficult to estimate the purchase price of each condo, but said it could be as much as $1 million, depending on a developer's plan, which could include some rentals.

Citing "deeply divided opinion," Harper called the proposal "one of the most significant and difficult" to evaluate during his tenure on the board.

"The project will be a new infusion of capital, both monetary and human talent, into the community to benefit all of us," he said. Citing support for the project from public safety and public works department heads, he predicted "few if any detrimental effects on the community. The benefits greatly outweigh any possible adverse effects."

He predicted that year-round residents of the development would take advantage of downtown amenities while stimulating "the largely unknown, underutilized commercial structures" along Franklin Street, off Main Street, and he depicted the development as a "bonanza" for already established downtown businesses.

Harper emphasized that the many positives of the project justified an exemption from the affordable housing provision, despite "a very excellent analysis" presented by the Planning Board. That board's analysis of the town's Residential Inclusionary Development bylaw finds that all new residential projects in all zoning districts must generate affordable housing, in this case at least two units.

He said that even though the bylaw does apply to the Winstanley proposal, including affordable housing in a luxury development would be "anathema" for the project.

"Imposing this requirement would possibly, and perhaps wisely, cause the proponents to withdraw the entire project and abandon the historical house, eventually causing it to be condemned and demolished," he said. "Failure to grant the waiver would be a poison pill. Do we turn down this incredible project when there are other ways of satisfying the affordable housing issue in town?"

One way, he suggested, would be for the Select Board to designate some of the tax revenue from the completed project to affordable housing.

"Affordable housing is incongruous with the business model of Windrose Place," according to Harper. "However valuable that may be to Lenox, this is not the appropriate venue for that housing."

Member Ned Douglas acknowledged the benefits, but stated that "affordable housing is something Lenox has to look at." Initially, he described himself as "on the fence" regarding the waiver from the affordable housing requirement, pending further discussion. Board Chairman Robert Fuster Jr., backed up Harper's endorsement of the project as well as for the waiver, and subsequently Douglas ended up supporting both.

Member Shawn Leary Considine, supported the special permits needed for the project, but said she found no basis for granting the exemption. She was the lone dissenting vote.

"This [affordable housing] bylaw is not a punishment," she said. "It's the law; it clearly applies to everyone and should apply equally to someone who does an ordinary, out of the way project just as much as someone who does a town-changing, ground-breaking, beautiful, historically preservationist project like this."

Describing the need for affordable housing as equally important in all kinds of projects, she suggested that sparing the development from including two affordable units or by making a donation to the town so they could be built elsewhere meant that the section of the zoning bylaw would never be applied when future proposals are presented to the ZBA.

But Harper contended that the donation option amounted to "extortion."

Ahead of the vote, Winstanley, whose marketing headquarters was in the Northrup house for 30 years until 2018, acknowledged that he had been unable to interest a developer in a commercial project for the past 18 months, but he did encounter several who sought a mixed-use plan.

Working with a team, he settled on a concept "that we felt balanced three needs of the town." He listed them as preserving a historic building that has seen better days, creating "an economic engine to give the village a real opportunity to grow and to have a future," and retaining an open-space concept typical of New England communities.

"I think we were able to balance all those distinctive issues in a way that is very appealing," Winstanley told the board. His brother, Michael Winstanley, whose Alexandria, Va., architecture and planning firm specializes in historic renovation, came on as a partner to design the development.

"I will go forward and try to sell this project to developers that will be able to execute it at the level of fit and finish that the design calls for," Nathan Winstanley said. But if the project is "burdened" by a $400,000 donation, a "payment in lieu" for affordable housing, "it would clearly undermine my ability to do that."

"People don't want affordable in their neighborhoods," he said. "I don't think any developer in the world would put two affordable units into a mixed-use development geared toward a luxury buyer, it just wouldn't be appropriate."

Winstanley asked the board to approve the project, grant the waiver, and enable him to tell developers that the town fully supports his goals. "That's going to make a huge difference, a huge impact on my ability to sell the project and go forward," he said.

In order to meet parking requirements, the project eliminated one residential unit from the plan, now yielding 26 apartments with 63 parking spaces, one more than required by the town's zoning rules.

The zoning board, which reported that of 16 letters received, two-thirds were in favor of the proposal, concluded its meeting by approving special conditions. Those included no new buildings exceeding the town's 35-foot height limit; downward lighting; stormwater standards under the Wetlands Protection Act; adequate screening for the eastern end of the parking area to be approved by the ZBA, and limiting the parking to residents' use, except for the 10 designated commercial spaces.