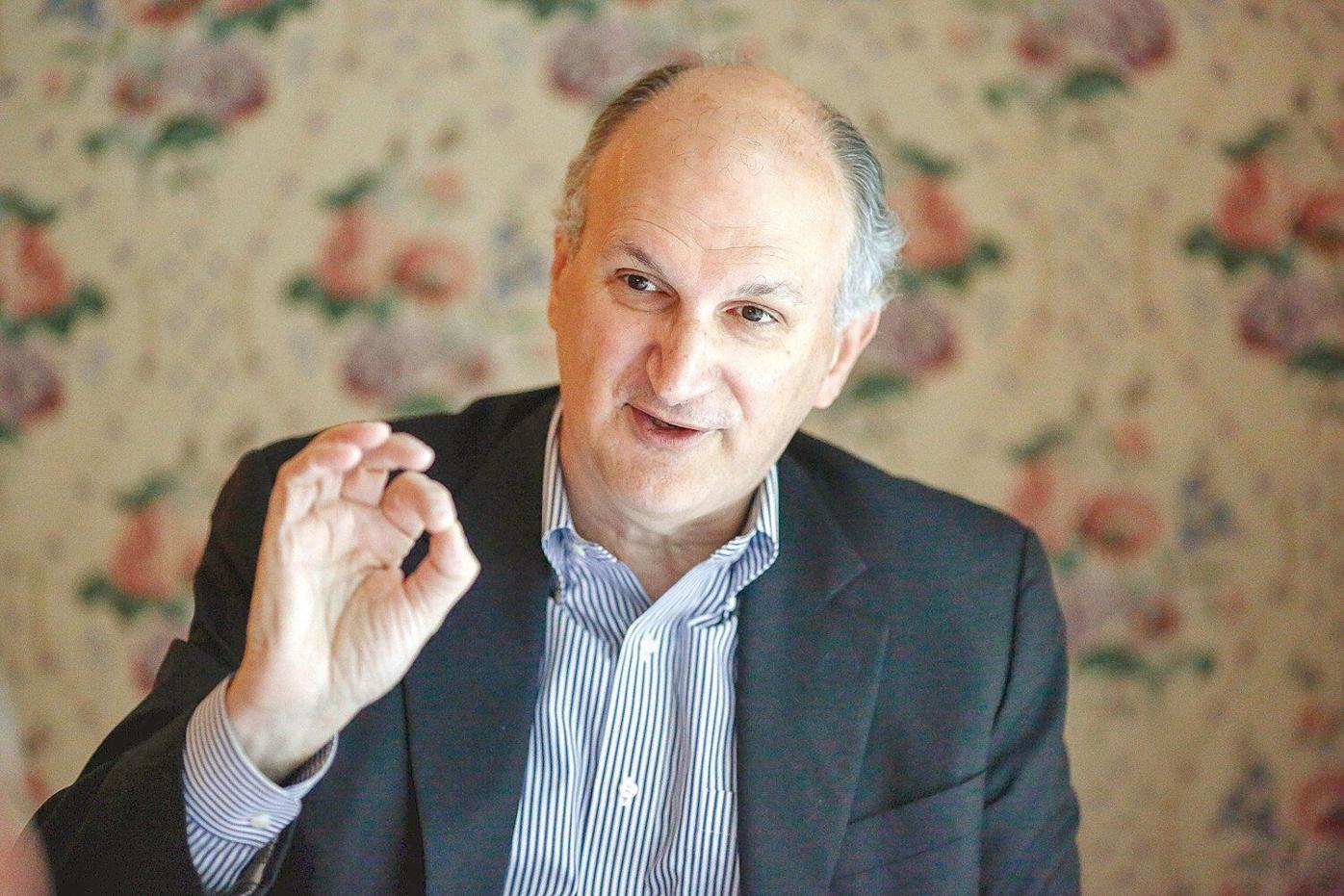 Boston Symphony Orchestra President and CEO Mark Volpe, shown in 2017 at the Red Lion Inn in Stockbridge, will retire at the end of February 2021. "It's a labor of love, but at a certain point, there are other things in life," he said. 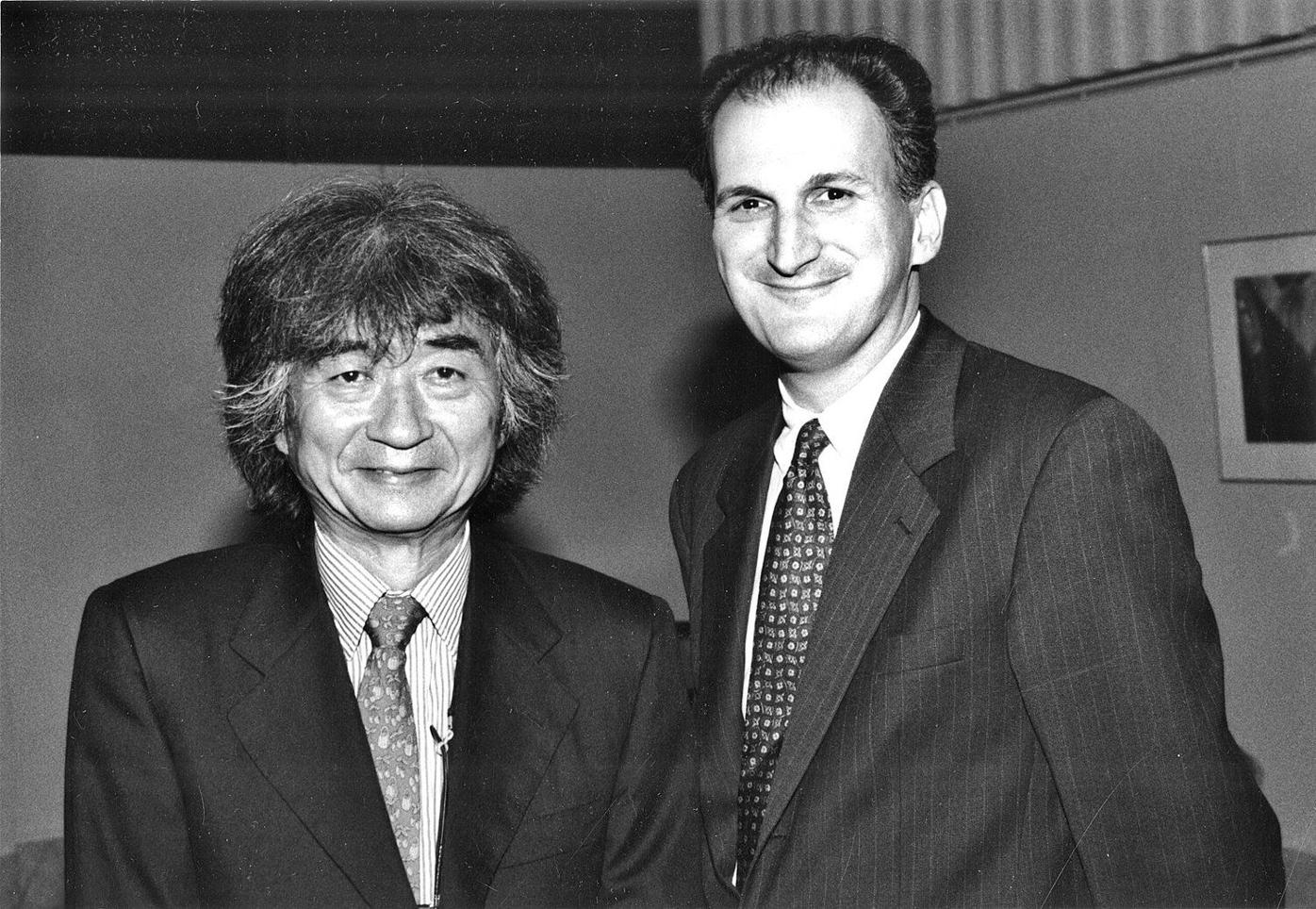 Seiji Ozawa, left, and Mark Volpe, shown in 1997, the year Volpe was named managing director of the Boston Symphony Orchestra. Volpe is the longest-tenured orchestra executive in the U.S. 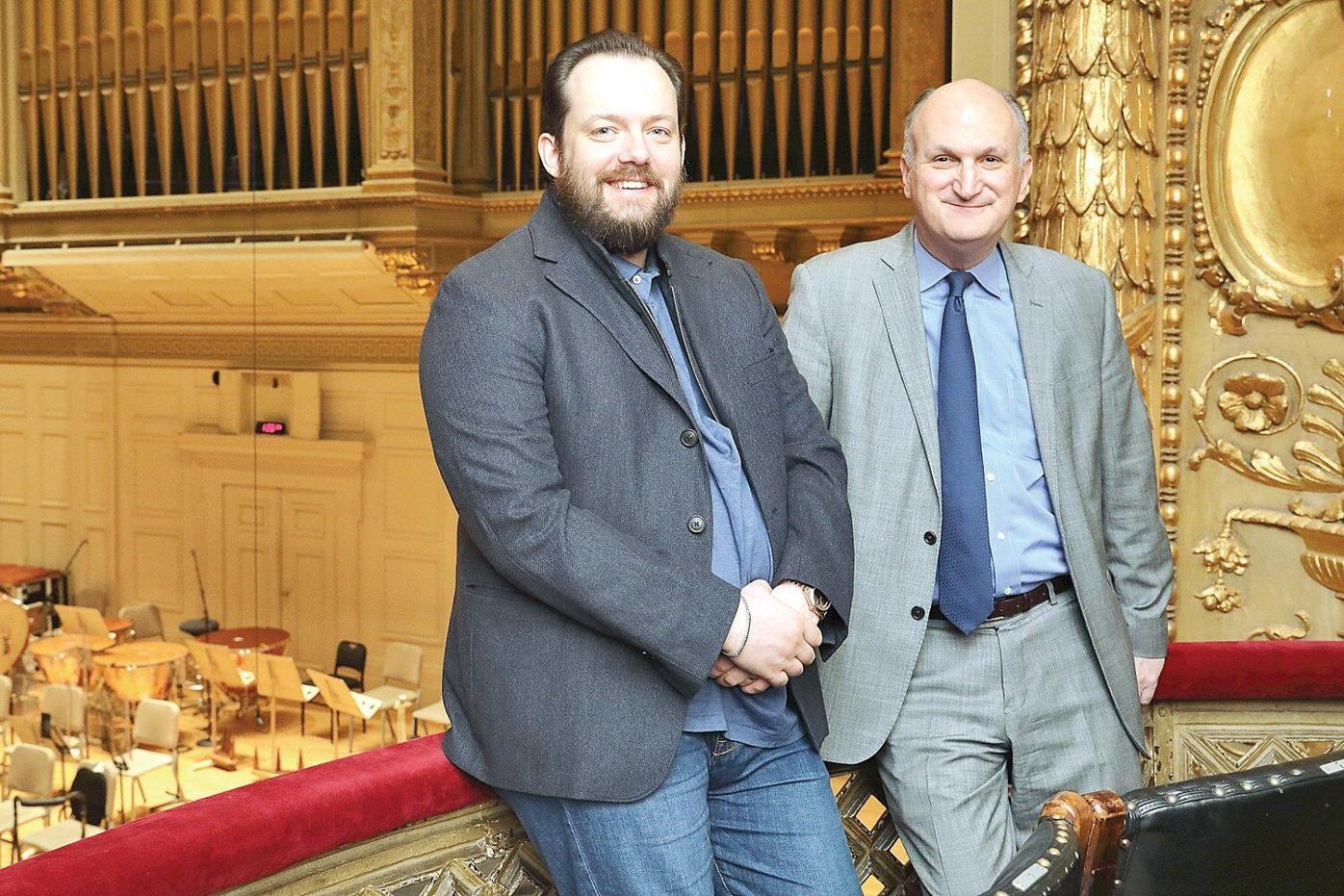 Boston Symphony Orchestra President and CEO Mark Volpe, right, and music director Andris Nelsons. "For me, Mark quite simply personifies the truly special family spirit we are so privileged to enjoy at the BSO," Nelsons said in a prepared statement.

Boston Symphony Orchestra President and CEO Mark Volpe, shown in 2017 at the Red Lion Inn in Stockbridge, will retire at the end of February 2021. "It's a labor of love, but at a certain point, there are other things in life," he said.

Seiji Ozawa, left, and Mark Volpe, shown in 1997, the year Volpe was named managing director of the Boston Symphony Orchestra. Volpe is the longest-tenured orchestra executive in the U.S.

Boston Symphony Orchestra President and CEO Mark Volpe, right, and music director Andris Nelsons. "For me, Mark quite simply personifies the truly special family spirit we are so privileged to enjoy at the BSO," Nelsons said in a prepared statement.

The Boston Symphony Orchestra's top executive, Mark Volpe, who has championed development of the orchestra's summer home at Tanglewood and presided over major expansion of the BSO's renown and assets, plans to step down at the end of February 2021.

Volpe, 62, who was named managing director in September 1997, is the longest-tenured orchestra executive in the U.S. He's also the BSO's second-longest, exceeded only by Charles A. Ellis, the orchestra's first formal manager, who presided from 1885 to 1918.

He formally announced his retirement Wednesday.

Volpe's dedication to the orchestra's summer home in the Berkshires climaxed with the June 2019 launch of the $33 million, year-round Linde Center for Music and Learning, a four-building complex and home of the new Tanglewood Learning Institute.

Funded by the $72 million Tanglewood Forever fundraising campaign, the investment in the 526-acre, 104-structure Tanglewood property astride the Lenox/Stockbridge line includes major facilities and landscaping upgrades and a dedicated $10 million performance endowment.

Volpe, whose title was elevated to president and CEO in 2018, also has focused on expanding the orchestra's Popular Artists offerings in the weeks surrounding the orchestra's eight-week residency that typically begins just after Independence Day and includes several Boston Pops concerts.

At the request of the organization's executive committee, Volpe agreed to a one-year advance notice of his departure, he told The Eagle in a phone interview.

"I don't want to work 80 hours a week, 50 weeks a year," he said. "It's a labor of love, but at a certain point, there are other things in life. While I'm still healthy, I want to remain intellectually engaged and active. I have one more big thing in me, but it won't be another orchestra."

In a September 2017 Eagle profile, he acknowledged the ongoing challenges of "cutting through the noise of an ever-more cluttered marketplace, a lot more competition, how to remain relevant in a very diverse world. We certainly appreciate that various people like various types of music, and if we can add to the shoulder seasons at Tanglewood, that's all positive — it generates net income for the orchestra and it's good for the local economy."

Asked this week to describe the high points of his tenure, Volpe cited "a relationship with artists, musicians, businesses, the community, the political class, the press. The legacy will be the artistic standing of the orchestra and a drive for inclusion of the underserved population, to bring more people the joy of experiencing great music."

He also pointed to upgrades at Tanglewood and at Boston's Symphony Hall. "I felt how important Tanglewood is to the profile and financial well-being of the Berkshires, especially in the summer."

Before his 23-year tenure at the BSO, Volpe managed the Minnesota Orchestra and the Baltimore Symphony Orchestra, followed by seven years as chief executive of the Detroit Symphony, where he oversaw a $250 million urban redevelopment project surrounding the orchestra's concert hall.

"I was committed there. One day, the phone rang and it was Yo-Yo Ma. He had seen what I did in Detroit and he said I've got to come to Boston, but I said, `I'm not done here.' And then, Isaac Stern called."

After Volpe resisted, the famed violinist and savior of Manhattan's Carnegie Hall told him, "Are you kidding? It's the Boston Symphony!"

"The clincher was, it's the BSO; it's Tanglewood," Volpe said. "Historically, this has been the most important orchestra in America. It created the Pops genre and the summer festival, and it committed to the next generation of musicians through the Tanglewood Music Center."

Looking back, Volpe acknowledged, "I had no idea of the adventure I was about to undertake. I will be forever grateful to the trustees for their wisdom and support, to the incredible staff who made everything possible, but most of all to [Music Director] Andris [Nelsons] and the BSO musicians, who grace the stages of Symphony Hall, Tanglewood and many of the world's finest concert halls and make magic happen virtually every time they play."

Nelsons was appointed music director in May 2013 and took up the position in September 2014. His extended eight-year contract through the 2021-22 season contains an evergreen clause for automatic renewal.

"I will forever be indebted to Mark for the opportunity to lead the musicians of the Boston Symphony Orchestra, and to join this remarkable organization for which he has done so much," Nelsons said in a prepared statement.

"For me, Mark quite simply personifies the truly special family spirit we are so privileged to enjoy at the BSO," he stated. "His absolute unique combination of qualities — deep knowledge of the repertoire, passion for new ideas and initiatives, keen intelligence and insights into every aspect of the industry, strong relationships with the musicians, and tireless supportive presence — have continually played a major role in my feeling at home with the Boston Symphony Orchestra and in the wonderful city of Boston."

Volpe presided over a major increase in the BSO's financial assets, emphasized development of new media activities, including bso.org, a resurgence of recording and broadcasting activity, and a renewed emphasis on national and international touring.

He is credited with championing diversity among the musicians, a higher profile on social media, and an expansion of repertory to include more music by women and by living composers.

During his watch, the BSO enhanced its outreach, educational activities and community involvement efforts in Boston and the Berkshires as well as promotions and ticket-discount programs for students and young professionals.

Volpe acknowledged major challenges, including the impact of the #MeToo movement, which led to the departures of former BSO Music Director James Levine and prominent guest conductor Charles Dutoit. Both faced allegations of sexual harassment, which they denied.

Other difficulties included the recent transition of leadership at the Tanglewood Festival Chorus and the confidential settlement that resolved the pay-equity lawsuit filed by principal flutist Elizabeth Rowe.

"It wasn't easy, but we worked through it because we have the mutual respect of the players," Volpe said.

Other upcoming leadership transitions include the departure of Susan W. Paine as chairwoman of the board of trustees.

"We are thankful to Mark for his leadership, and his generous commitment to stay on for the next year and continue the BSO's important work," she said. "The global arts community is entering a new decade, keenly aware of a future that promises significant change for every organization among us. The BSO is no exception. While we are supported by a strong institutional foundation, we remain deeply committed to extending our reach and relationships in an evolving context."

Boston civic leader Barbara W. Hostetter, a trustee since 2014, will begin a three-year term as the new board chairwoman March 1, 2021. Her first crucial mission is to lead the search for the orchestra's next top executive. She stated that she anticipates "guiding a thoughtful, transparent and inclusive search process."

When asked several years ago how he spends his limited downtime, Volpe responded: "I play tennis and golf with the guys in the orchestra and the board members. Obviously, other than my family, the orchestra is my life."

Asked what he will miss the most, he cited "the music-making, being around an incredible group of musicians who inspired me, along with the staff. There is a family dynamic here; my kids grew up with the kids of the musicians and staff members."

What he'll miss the least is the workload.

As for the BSO's future, Volpe suggested that "what makes us absolutely unique is Tanglewood, so, building on that with optimism, that's our future with so many resources invested in training the young musicians at the Tanglewood Music Center and the Boston University Tanglewood Institute."

After he steps down, he expects to enjoy more leisure and family time while exploring "interesting, thought-provoking projects. For once in my life, my days are not going to be so structured. I've been structured since nursery school. I want to do things that are really interesting and make a difference."