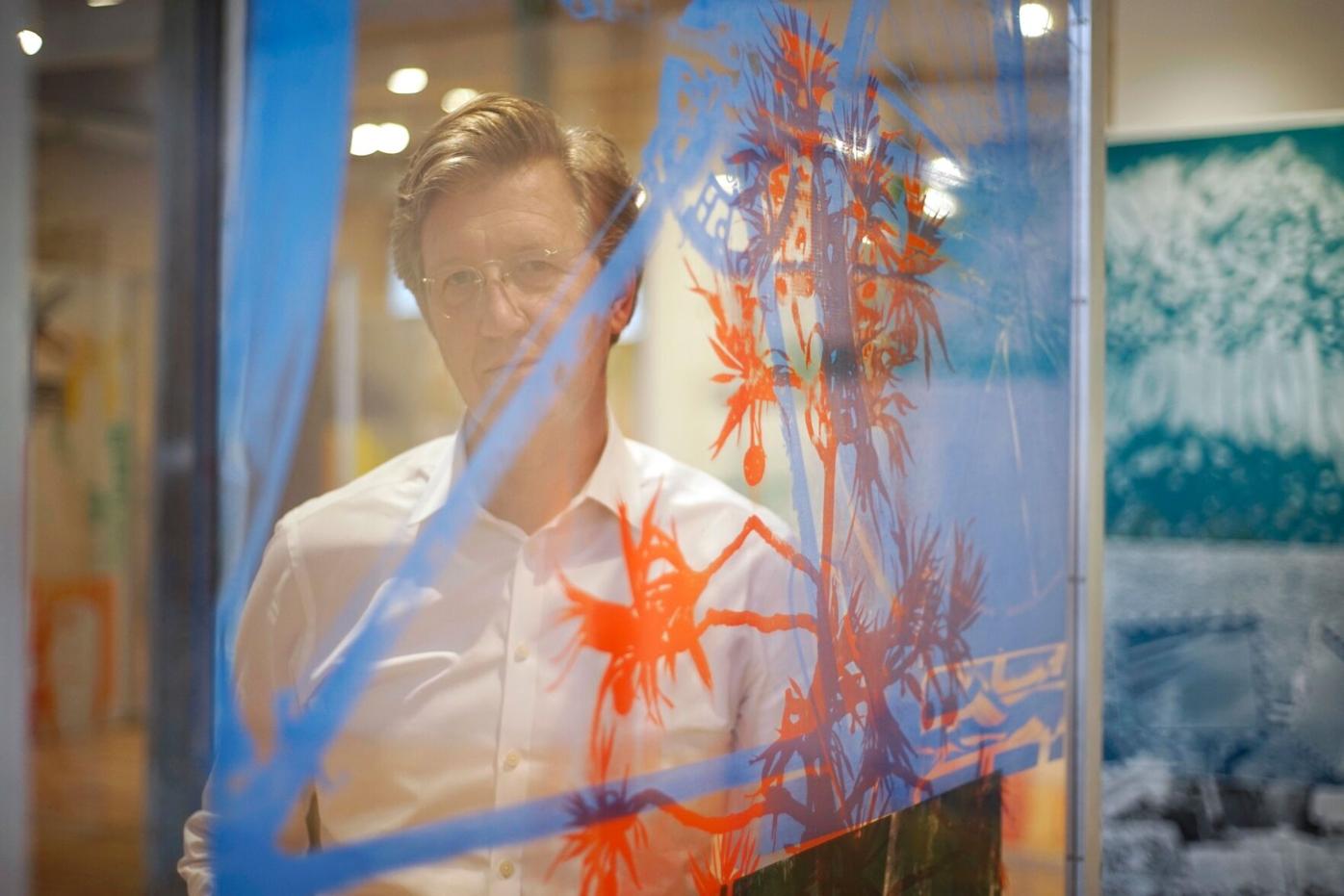 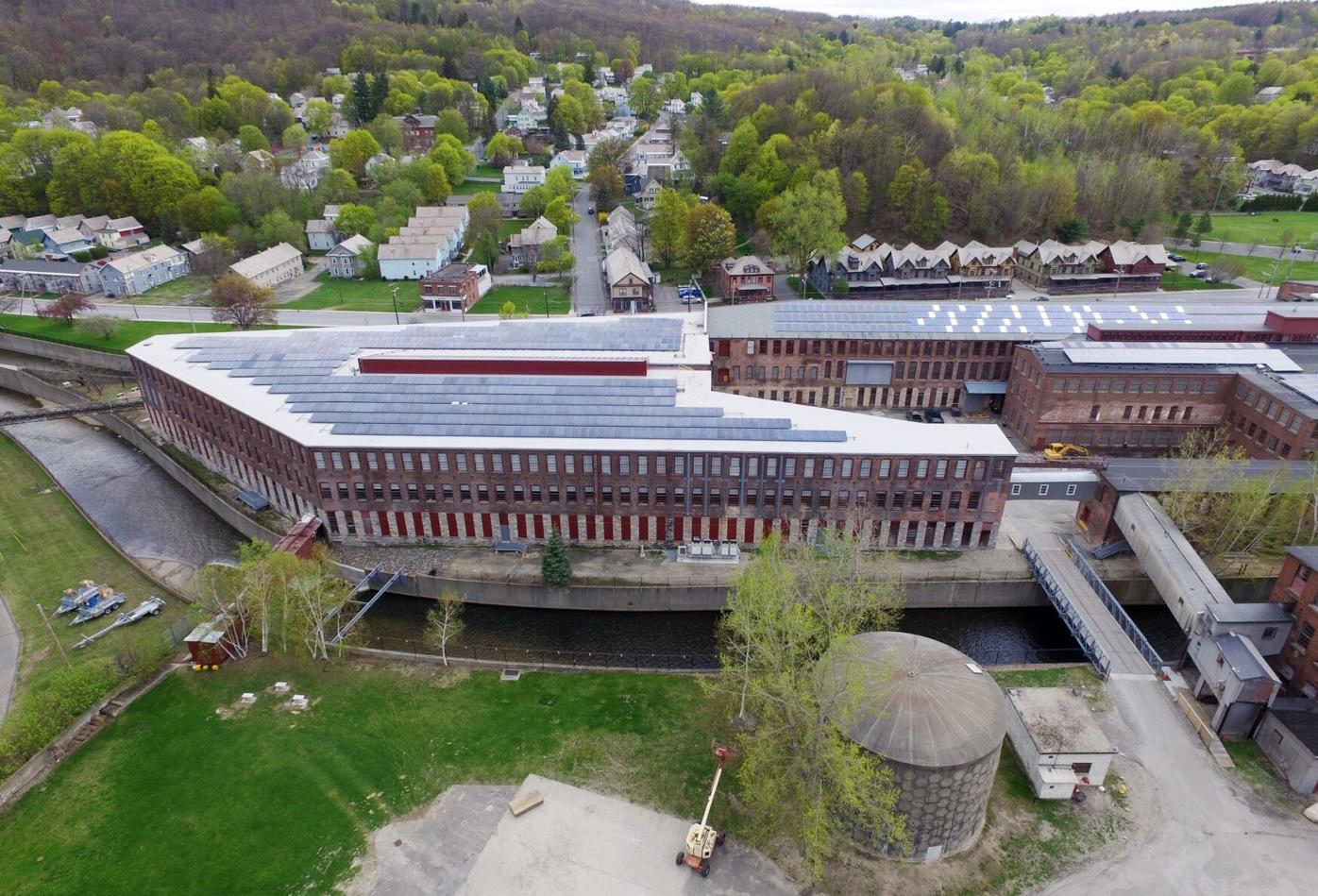 The completion of Building 6, seen here in a photo taken by The Eagle drone, marks the third and final phase of the Massachusetts Museum of Contemporary Art in North Adams. The concept to transform the former Sprague Electric mills campus into a museum of modern art surfaced 30 years ago. After opening in 1999, Mass MoCA today celebrates the $65.4 million renovation of Building 6 that adds 120,000 square feet of gallery space, nearly doubling the size of the museum and making it the nation’s largest museum of contemporary art.

The completion of Building 6, seen here in a photo taken by The Eagle drone, marks the third and final phase of the Massachusetts Museum of Contemporary Art in North Adams. The concept to transform the former Sprague Electric mills campus into a museum of modern art surfaced 30 years ago. After opening in 1999, Mass MoCA today celebrates the $65.4 million renovation of Building 6 that adds 120,000 square feet of gallery space, nearly doubling the size of the museum and making it the nation’s largest museum of contemporary art.

NORTH ADAMS — There were many times during the more than 10-year struggle to establish the Massachusetts Museum of Contemporary Arts that it seemed to be a losing battle.

In fact, during the decade-long period of early development, there were 168 “negative” newspaper articles and editorials written about Mass MoCA before a shovel even hit the ground.

Founding Director Joseph Thompson knows this because he saved every one of them.

More than 30 years after the initial concept of what became Mass MoCA was introduced, the museum has completed its final major phase of development in the 16-acre, former Sprague Electric industrial complex and is opening the doors to Building 6 and 130,000 square feet of additional gallery space today.

The $65.4 million project doubles the museum’s gallery space, making it the largest contemporary art museum in the country. The project was funded by private donations and a $25.4 million grant passed by the state legislature in 2014 and coupled with a $40 million private fundraising campaign.

Phase III also includes the addition of amenities, such as green rooms, to facilitate its growing slate of performing arts. In the past decade, the museum has become the home of a summer festival hosted by the alternative rock band Wilco, as well as the FreshGrass bluegrass festival.

Few people may know that the museum owes its existence to an abandoned factory in Cologne, Germany.

In 1985, he visited the Cologne Art Fair and discovered that two young gallerists had opted to forego displaying their collection in the event’s main hall. Instead, the two rented an abandoned factory next door.

“They didn’t do a thing with cleaning up the space,” Krens said.

On a drive through western Germany, Krens took notice of all of the abandoned factories.

“It was almost like a thunderbolt struck. I said, ‘My god, there all these factory buildings in North Adams,’” Krens said.

After returning to the United States, Krens approached then-North Adams Mayor John Barrett III with his idea. They later toured some of the empty mill buildings.

Krens’ concept was much smaller at the time, Barrett recalled. They toured the Windsor Mill and the Beaver Mill and talked about the proposal.

Then they started considering the former Sprague Electric facility and the concept began coming together.

But the plan fell apart, and it was reassembled, frequently. Funding was hard to come by. Local support was hard to find.

Planners enlisted the help of Williams College President Francis C. Oakley, who wound up being an essential partner in the early years for building support and finding funding.

“I always felt Williams College was the key to everything,” Barrett said, “because we needed credibility.”

And after some convincing, then-Gov. Michael Dukakis was also on board.

“Dukakis would do anything for this area,” Barrett said. “We were like a foreign country when it came to economic growth. We were not on anyone’s radar.”

“We got the governor’s attention, and the pitch was rather straightforward,” Thompson said.

The museum’s proponents imagined a world where a major contemporary art museum would fit right in among the Berkshires’ existing cultural assets.

“We argued that we could probably lure some of the Berkshire cultural visitors who are already coming to venture on to North Adams and maybe add a night or two to their cultural itinerary. And that would lead to a better future than doing nothing at all,” Thompson said.

There were a few examples of museums in North America utilizing alternative spaces to host contemporary art, but “by and large, in the museum field, it was almost unthinkable,” Thompson said.

“There was kind of a museological fascism at work. Spaces needed to be white, pure, crisp, illuminated from only above with no side lighting, clean edges, and sharp. Perfect hermetic boxes, like vaults,” Thompson said.

In March 1988, the Legislature passed a $35 million bond to fund the creation of the Massachusetts Museum of Contemporary Art, which was estimated at the time to cost $72 million.

“It immediately went to hell in a handbasket,” said Thompson, who was named the museum’s founding director that same year.

Dukakis lost his bid for the presidency and the Massachusetts economy collapsed.

And money issues continued to plague the effort. At one point, Barrett said, they sold 200 bricks culled from the site as souvenirs with a steel plaque on the face for $10 each. They needed the money to pay the utility bills.

The plan for the museum was also lacking in the eyes of potential donors and state officials, Barrett said, until they started conferring with directors of other Berkshire cultural institutions. It was Sam Miller, director of Jacob’s Pillow, Barrett recalled, who suggested the one idea that crowned the plan — live performance spaces.

That’s when things started turning around, according to Barrett.

Then-Gov. William Weld had been with holding his support for any more state funding, asking to see more plans and for the group to come up with more locally raised funding.

So the group raised the funding — including the donation of the Sprague property — and shared the plan with Weld.

According to Barrett, Weld’s reaction marked his turnaround: “This is just counterintuitive enough to work.”

“Swift was the one that kept Bill Weld on task,” Barrett said. “She was tenacious.”

In 1995, after years of planning and struggling to raise funds, the museum finally secured $18 million in state funding to launch the first phase of its construction.

“We had no cash, no lines of credit, and no endowment,” Thompson said. “We bit off so much more than we could chew architecturally. These buildings, while they’re our main asset, they’re also our prime liability.”

From the outside, the museum looked good. It was receiving attention from national press and cars were starting to fill the parking lot.

But internally, there were brushes with bankruptcy.

“We didn’t have deep pockets, no endowment to speak of,” Thompson said. “We certainly didn’t have the kind of money you need to go out and build a permanent collection”

Every Monday morning, he recalled, the museum’s chief financial officer would leave a Post-It note on Thompson’s office door that displayed a single number:

“Those were the numbers of the thousands of dollars I needed to raise that week to make payroll,” Thompson said. “It was unrelenting and difficult, and we barely scraped by.”

But the museum had space, time, and the staff to produce any work of art. Though the museum has evolved, at its core it has always relied on an enormous flexibility and a ton of space.

“There’s a certain kind of fearlessness about Mass MoCA. ‘Who cares; we can do that,’” said Hans Morris, chairman of the museum’s board of trustees.

A BATTLE OVER ART

Of course, the risks have not always paid off.

The most notable low-point for the museum in its formative years came in a tense 2006 standoff with the Swiss artist Christoph Büchel, with whom the museum had commissioned to create “Training Ground for Democracy,” an ambitious work of art that had the museum purchasing mobile homes and replicating a vintage movie theater.

The museum argued that the project had soared past its budget, but Büchel countered that the institution had mishandled it and he stopped working on the installation until his conditions were met.

The battle landed in a U.S. District Court, where the museum won the court’s permission to show the unfinished artwork in 2007.

The artist appealed the U.S. District Court’s decision. And in January 2010, an appellate court said showing the unfinished work violated Büchel’s copyright. But in December 2010 and after years of legal wrangling in the courts, the artist and the museum reached a settlement. Claims against the museum were dropped and Büchel took his work back.

“Even if you are good at managing risks, you definitely are going to have some screw-ups,” Morris said. “To me, that’s fine.”

The museum has not seen that level of controversy since and has continued to evolve.

A DIFFERENT KIND OF MUSEUM

The traditional concept of a museum, Krens argues to this day, is obsolete and based on a time when people didn’t travel as extensively.

“Museum curators always talked about filling gaps in the collection as if having one painting by 100 artists told the story that one needed to know,” he said. “It was like Noah’s Ark, you had one of everything.”

Many museums have built up incredible collections of art, but only show a tiny percent of what they own at any given time.

“At Mass MoCA, we have the exact opposite,” Morris said. “That evolved into this extremely intriguing concept, which in effect is these joint ventures with much of the artwork where it’s owned by somebody else.”

The museum has a rotating core that it curates — examples of which include the popular Nick Cave exhibition “Until” — but has expanded into partnerships with artists and foundations, starting with the iconic Sol LeWitt drawings in 2008, the result of a partnership with the Yale University Art Gallery.

Prior to 2008, the entire museum’s exhibitions would revolve continually.

The LeWitt installation “was like a light bulb going on for us,” Thompson said. “It gave people something to come back to.”

The concept has expanded in recent years to include the Anselm Kiefer Gallery, a partnership with the Hall Art Foundation and long-term exhibition in Building 15 that launched in 2014.

Now, in Building 6, the museum has formed long-term partnerships with artists ranging from James Turrell to Laurie Anderson.

“We don’t own any of that, and to me that’s a fascinating concept and maybe we’re the only museum that can do it,” Morris said.

The additional benefit of not owning the art, of course, is that it’s much cheaper to run a museum.

Mass MoCA runs on an annual budget of about $10.5 million.

“That is ridiculously low,” Morris said.

With the museum set to double its gallery space, Thompson expects at least a year of adjusting and figuring out how to operate the new Mass MoCA.

“There’s all kinds of pent-up energy and enthusiasm and adrenaline that gets generated across the whole spectrum during these run-up moments,” Thompson said. “Then you have to actually operate it.”

“Lt. Governor Polito and I congratulate the Massachusetts Museum of Contemporary Arts on their milestone achievement of becoming the nation’s largest contemporary art museum and are pleased the state and our administration could play a role in its expansion,” Baker said. “For nearly 20 years, Mass MoCA has had a major and positive impact on both North Adams and the Commonwealth’s tourism economy as well as the global arts and music community.”