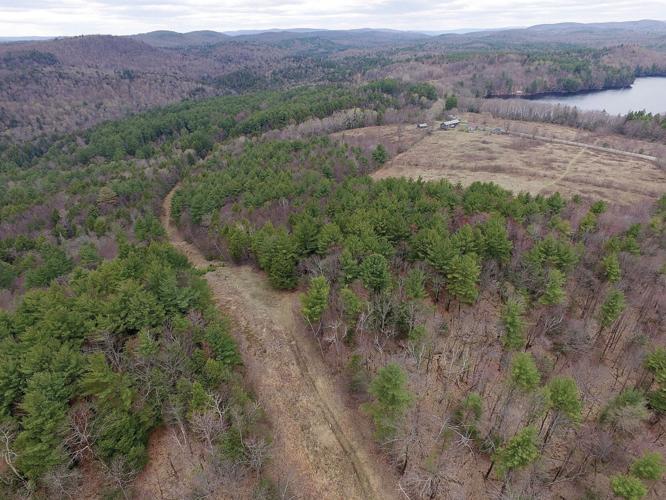 This is an aerial photograph of the Pipeline run in Sandisfield on Cold Springs Road. Trees will be cut to the left of this old pipeline in order to create room to build the Kinder Morgan pipeline. 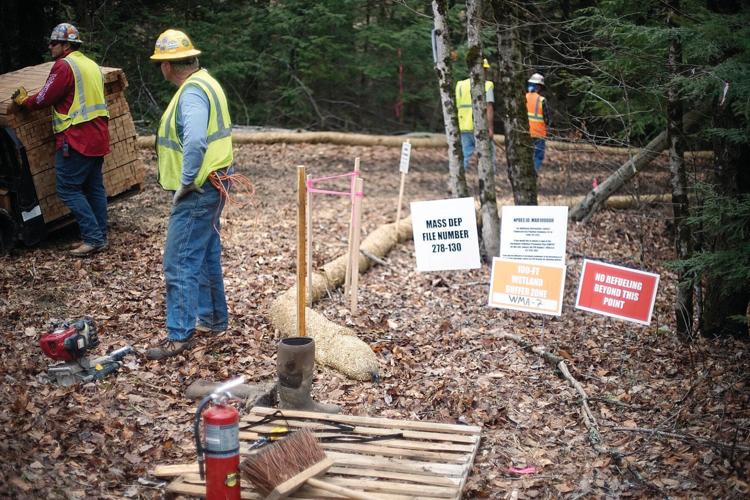 Workers prepare the worksite on Cold Springs Road in Sandisfield where work on the Kinder Morgan Pipeline is set to begin. As of Saturday. The work consisted of making a work area that prevents runoff into the surrounding ecosystems.

This is an aerial photograph of the Pipeline run in Sandisfield on Cold Springs Road. Trees will be cut to the left of this old pipeline in order to create room to build the Kinder Morgan pipeline.

Workers prepare the worksite on Cold Springs Road in Sandisfield where work on the Kinder Morgan Pipeline is set to begin. As of Saturday. The work consisted of making a work area that prevents runoff into the surrounding ecosystems.

PHOTO GALLERY | Path of the pipeline in Sandisfield

SANDISFIELD — An environmental group Monday asked the Federal Energy Regulatory Commission for a rehearing on its notice for Tennessee Gas Pipeline Co. to proceed with tree cutting and construction in Otis State Forest, and asked the agency to stay all work there.

The Massachusetts PipeLine Awareness Network filed the request on multiple grounds, including those raised in an April 18 letter to FERC from Massachusetts U.S. Sens. Elizabeth Warren and Edward Markey, and again Monday in letter from U.S. Rep. Richard Neal, D-Springfield.

The three legislators asked FERC to revoke Tennessee Gas' notice to clear the forest for this part of its $93 million Connecticut Expansion Project, saying the agency did not make the decision with a proper quorum, and because the agency still has not held a rehearing sought by Sandisfield residents over a year ago.

The group's request goes a few steps further. It includes what Director Kathryn Eiseman said are "outstanding issues" to do with Native American sites along the pipeline path, and natural gas demand forecasts that didn't meet the target to make the pipeline a "public need" that would justify a supply increase.

"The Connecticut local distribution companies that are the shippers for this project were falling short of their projected oil-to-gas-conversion figures," the filing said.

Tennessee Gas workers are already making preparations to lay 2 miles of 36-inch pipes into an existing pipeline run through state-owned forest here for the company's 13-mile project that will cross three states. Another 2 miles of pipeline here will go into private property, Eiseman said.

Tennessee Gas is a subsidiary of Kinder Morgan.

Private and Massachusetts State Police security patrols roaming the area reveal ongoing tensions in what has been a yearlong struggle as the state fought Tennessee Gas over the easement that federal law eventually forced it to grant the company. Residents and environmental groups also battled the company, and are still closely watching it for any missteps as workers prepare to fell trees to expand the pipeline corridor in an area near an old-growth forest and a pristine pond.

The filing also hits FERC for what it says are a number of the agency's procedural failures, including those related to Native American ceremonial stone landscape features found along the pipeline path by the Narragansett Indian Tribe's Historic Preservation Officer.

The group accuses the agency of ignoring protocols to address this, and it raises the concern that the stone sites might be "dismantled or bulldozed for construction, or damaged by tree-felling activities."

"FERC admitted that, 'Yes, there will be adverse effects on the ceremonial landscapes,' and that triggers public involvement," Eiseman said, adding that FERC has not dealt with these matters in the open.

Kinder Morgan spokesman Richard Wheatley has previously said the company does work with tribal officials to mitigate damage to historic sites. He could not be reached Monday.

FERC spokesman Craig Cano said he could not comment on the preservation issue "because the case is pending."

Eiseman said trees can't be cut until Thursday because the Sandisfield Conservation Commission required a two-week delay after the company's final plans were submitted.

And during the process, Tennessee Gas did not appeal what are over 100 conditions that range from how to minimize harm to vernal pools to a beaver dam that the company must breach, Eiseman said.

"Someone has to enforce the conditions," she added. Eiseman further said group filings are designed to ensure all the concerns raised about the project are resolved before the first tree falls.

"That would be ideal," she said, noting what happened when trees were cut for the Constitution Pipeline in Pennsylvania, before a permit was approved for the New York section of the project.

"The trees were cut down, and over a year later the project still hasn't been constructed and may not ever be constructed," she said.

Meanwhile, FERC has still not issued a response to Warren and Markey, according to Cano. Neither senator's office could be reached for comment.

"The people of Berkshire County under your assurance were to be given the opportunity to ask questions and address concerns," Neal wrote. "It is my belief that this rehearing should occur before a single tree is cleared."