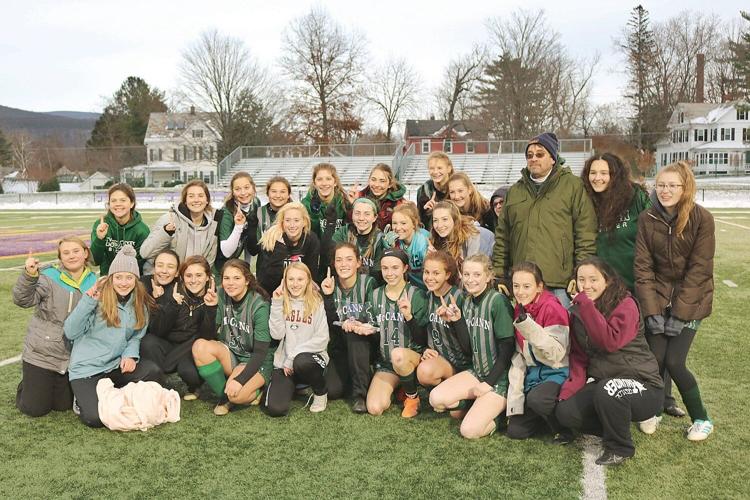 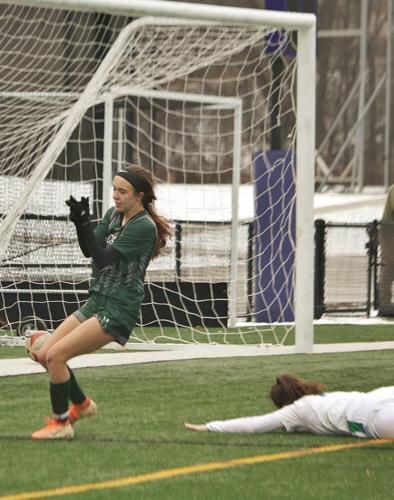 McCann Tech senior Dana Canales turns to celebrate after scoring the go-ahead goal in a 2-1 win over Blue Hills on Thursday. 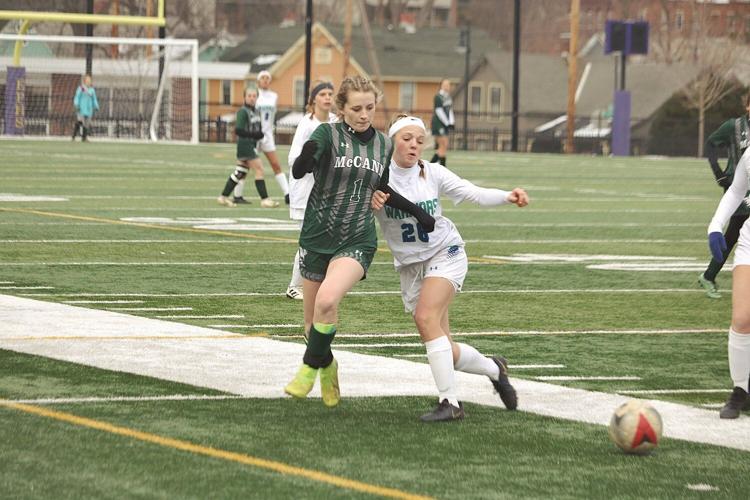 Izzy LaCasse scored a goal early in the second half to help McCann Tech by Blue Hills in the State Vocational Small School championship game. 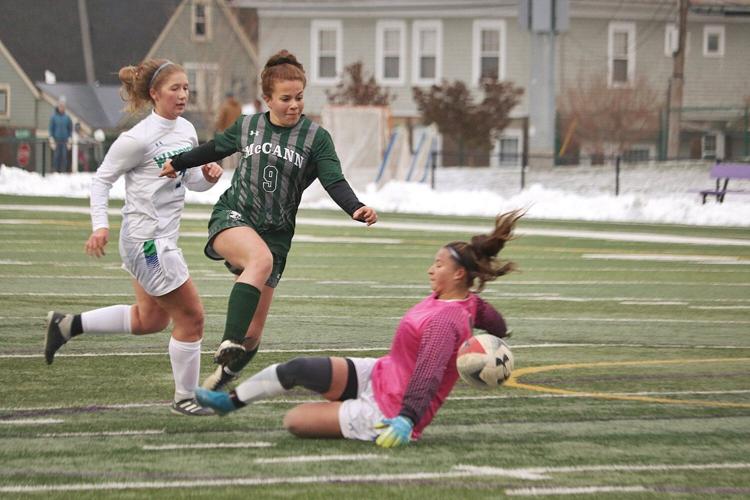 McCann Tech senior Dana Canales turns to celebrate after scoring the go-ahead goal in a 2-1 win over Blue Hills on Thursday.

Izzy LaCasse scored a goal early in the second half to help McCann Tech by Blue Hills in the State Vocational Small School championship game.

WILLIAMSTOWN — When senior captains Dana Canales and Reva Whitman showed up to preseason soccer practice earlier this fall, they were a little tentative.

McCann Tech was winless in 2018, and coach Mike Dowling was fielding a team in 2019 with a boatload of underclassmen and just those two seniors.

On Thursday afternoon, though, school grades mattered little. There were no freshmen or seniors. There were only Hornets, and they were celebrating at midfield.

It is the Hornets' first vocational title since 2006.

"When we started the year, I was like, 'there's a lot of freshmen,'" Whitman said after posing with the hardware. "But, I've been blown away by them."

"This is a great team," added Canales. "We're leaving McCann in great hands."

It was a come-from-behind victory for the Hornets, who had a defensive hiccup in the opening 10 minutes and went into halftime trailing the Warriors 1-0.

But Dowling never lost faith, and found his squad didn't either.

"They were confident at halftime. After they made the mistake and let up the goal, they corrected themselves," he said. "The whole team stepped up and carried play. I knew myself that something good was going to happen, and you could tell the confidence is building and building.

The Hornets found it easy to stay confident, especially with sophomore striker Izzy LaCasse darting around. Berkshire County's leading scorer had 34 goals entering Thursday, and in short order tied the game up.

LaCasse put a brilliant move on a defender entering the Warriors' box, but was then tackled from behind. The heady underclassmen calmly buzzed her 35th goal by Blue Hills goalie Isabella Bare on a penalty kick just 65 seconds into the second half.

The two sides played even soccer for the following 20 minutes. Whitman and junior Brooke O'Neil piloted the Hornets defense in front of goalkeeper Savanah Reynolds with steady clears and physical play. Offensively, the trio of LaCasse, Canales and junior captain Sarah Fortini consistently jabbed the Blue Hills defense with attempts.

After LaCasse's equalizer, Canales felt both comforted and energized.

And the veteran took that chance and ran with it. In the 63rd minute, Canales was led on a pass into Warrior territory by freshman Camryn Belisle. Canales broke by one defender, and drew the goalie out of position. Another defender tripped up, and Canales had the opportunity she needed.

"The goalie ran out, and I was able to tap it by her, and it just went," Canales said of her go-ahead and game-winning goal.

She turned at a full sprint, clapped her hands together and jumped straight into the arms of LaCasse.

A one-goal lead was far from safe, though. In the semifinal round, McCann saw the same advantage evaporate in the final minute, before going on to win in a shootout.

"It was just so intense," Fortini said of the final five minutes. "We've had teams score on us in the last minute, so you never know what's going to happen. It's so intense hearing the people on the sideline. It was crazy."

O'Neil, who played all year with a knee brace, putting off the doctors so she could try and get her squad to the finish line, tried to put the situation out of her mind

"Just keep playing hard. Didn't know the time, so stick to it, keep fighting through everything and make sure they don't get down into the 18," she said.

McCann got through it. Reynolds turned away two tries in the final six minutes, finishing with six saves overall to complete the ultimate turnaround season.

"I can positively say that we worked so much better as a team," Fortini said. "We communicated so much better. It was great to have all the freshmen come in and know what they were doing right off the bat."

McCann listed 10 first years on its game roster, but Dowling credited his seniors with creating a welcoming culture that allowed those youngsters to come in and succeed.

"The freshmen class is really good. They were scared, nervous at first, but the last few games they're becoming real, high school varsity soccer players," said the coach. "I've got to give kudos to Dana and Reva, they were fantastic all year. We got them in here for their leadership, and I'm just so proud of them. To finish their career like this, it's pretty cool."

As for those two, ending their careers posing with a trophy was pretty sweet.

"It's so amazing," said Whitman.

"Amazing," agreed Canales. "It's the best possible way to end it."