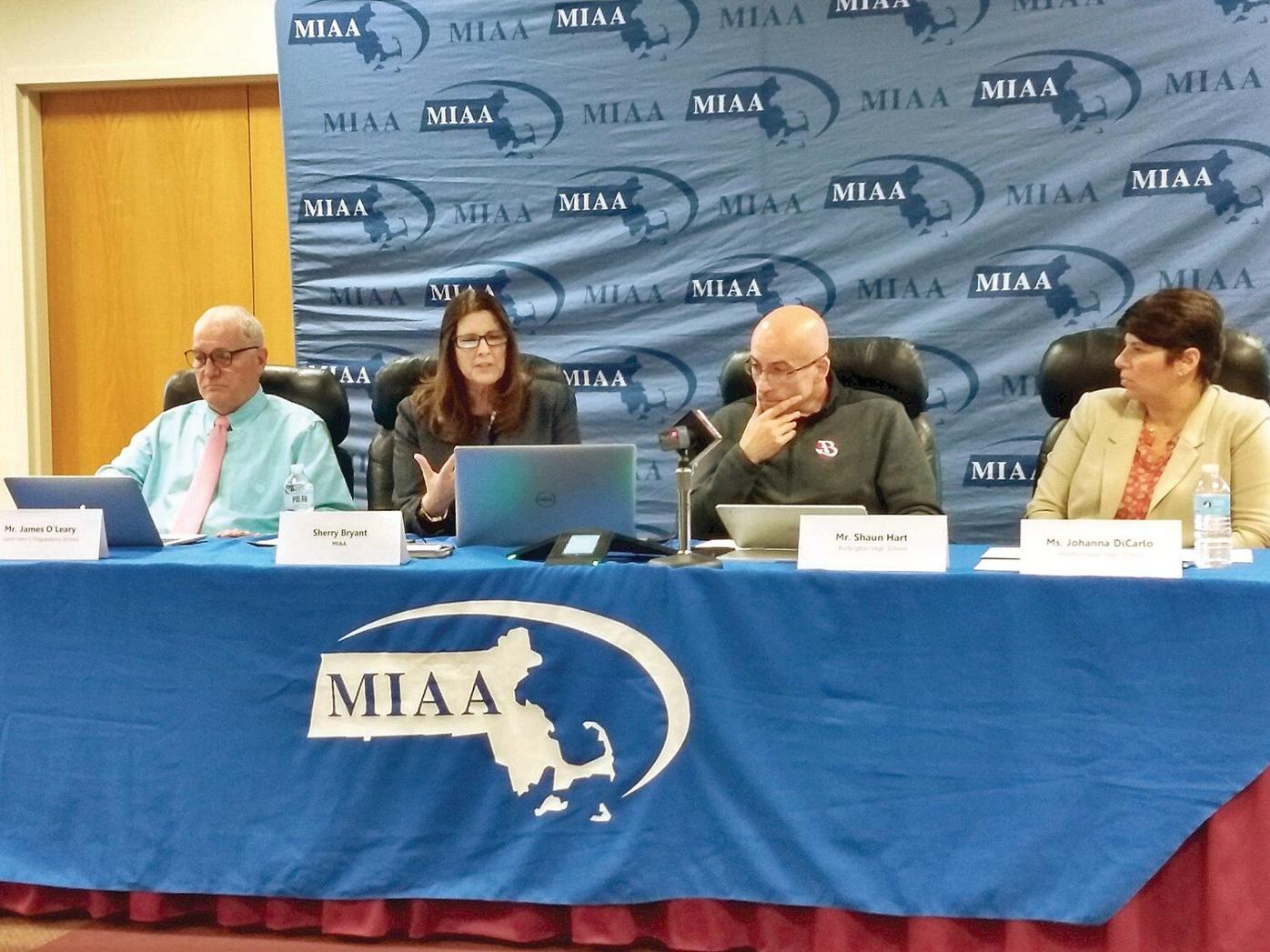 MIAA Tournament Management committee members James O'Leary of St. John's Prep, Sherry Bryant of the MIAA, Shaun Hart of Burlington and Johanna DiCarlo of Westborough discuss the new state playoff system that is scheduled to go into effect for the 2021 school year. 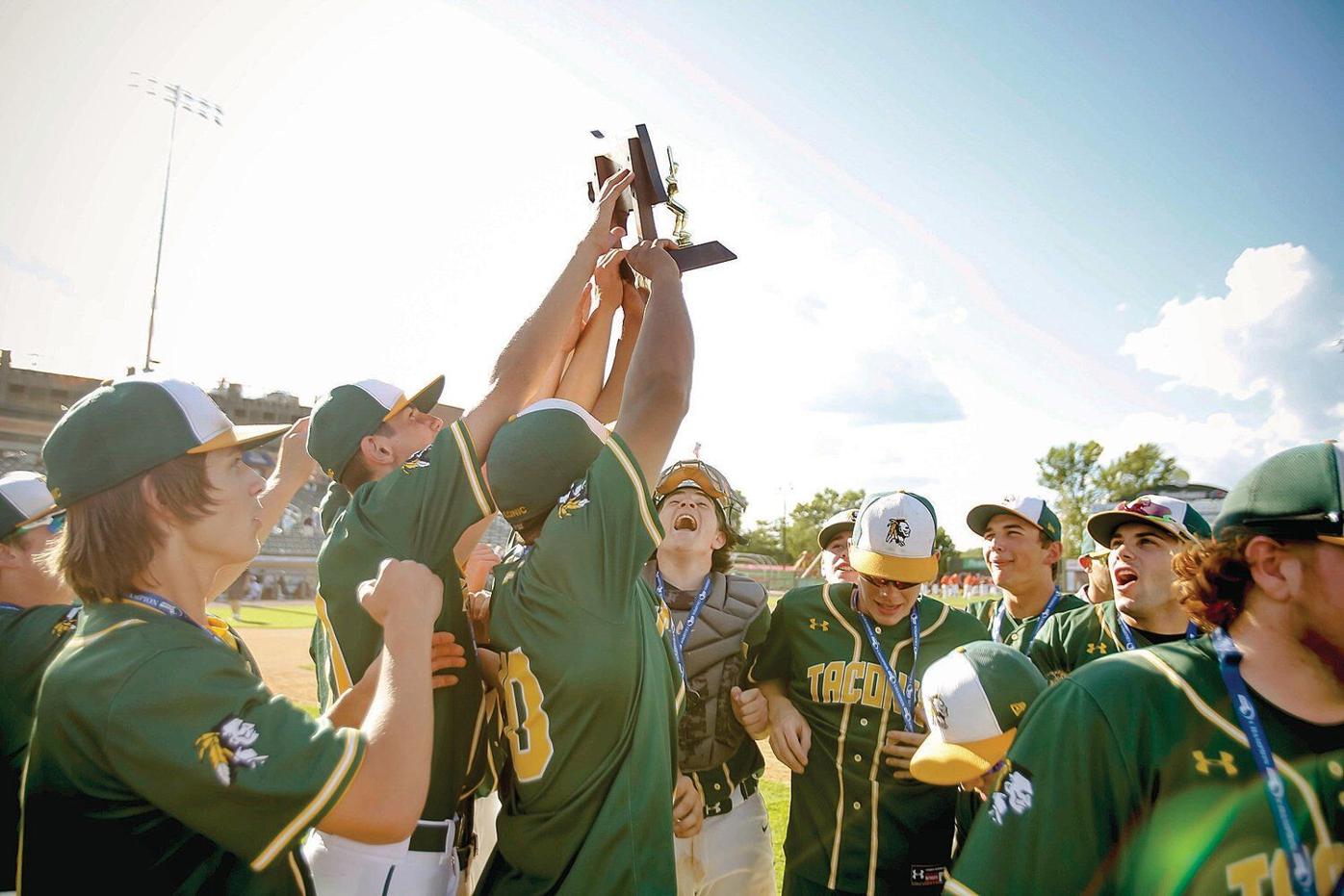 The Taconic baseball team has won two state titles in the last three seasons. Starting in 2021, though, a potential path to the state championship could change for the Braves, and all teams in Massachusetts. The Massachusetts Interscholastic Athletic Association is planning a new, statewide tournament that would end the current format across every sport in the state.

MIAA Tournament Management committee members James O'Leary of St. John's Prep, Sherry Bryant of the MIAA, Shaun Hart of Burlington and Johanna DiCarlo of Westborough discuss the new state playoff system that is scheduled to go into effect for the 2021 school year.

The Taconic baseball team has won two state titles in the last three seasons. Starting in 2021, though, a potential path to the state championship could change for the Braves, and all teams in Massachusetts. The Massachusetts Interscholastic Athletic Association is planning a new, statewide tournament that would end the current format across every sport in the state.

FRANKLIN — The members of the Massachusetts Interscholastic Athletic Association's Tournament Management Committee are convinced that their new play for statewide playoffs in high school sports will work.

And the term "balance" may just replace "tradition" in the lexicon of high school sports.

"I'm all about history. I love traditions," Westborough High School athletic director Johanna DiCarlo said, "but I also think it's time to move this a little bit forward.

DiCarlo and three other members of the TMC met with reporters at the MIAA headquarters on Thursday afternoon to discuss a sea change in high school playoffs.

In what would be the biggest change in high school sports in recent memory, the proposal that will come before the MIAA Board of Directors and then all of the schools, eliminates sectional tournaments. The proposal, which would go into effect for the 2021-22 school year, would set up bracketed tournaments, similar to the NCAA Tournaments. A final vote by the MIAA membership could come as early as late February.

"I think everybody, no matter whether the statewide proposal goes through or any other tournament goes through, what everybody wanted was equal and balanced," Burlington High School athletic director Shaun Hart said.

Hart, DiCarlo, MIAA associate director Sherry Bryant and former St. John's Prep athletic director James O'Leary, unveiled the proposal, and then took questions from inquisitive reporters from across the commonwealth on topics ranging from how teams would be seeded, how the playoff structure would work, and issues concerning home fields and/or courts and travel requirements. The members of the TMC also said this new structure would answer gender equity issues, along with tournament bracket size and competition.

O'Leary said that the MIAA's Board of Directors are in favor of the plan.

"They were very supportive of the proposal," he said. "They had many choices. They could have said 'No, we don't want to go forward.' They could have voted as they did, going forward to the Association to vote on it. They took a second vote, and they supported the proposal as it is right now, 15-0-2. It was overwhelming support from the Board of Directors."

DiCarlo and Hart both said that another factor in creating the new state tournament format is because teams in the West and Central sections may have to play fewer games to get to a state semifinal than their cohorts from the North and South sections. The TMC wanted to make it more equitable.

According to the presentation, held at the MIAA office, tournaments would consist of 32 seeded teams, plus any teams that won half of their games in the regular season (.500 record). Those unseeded teams would, according to the proposal, "will be seeded from the bottom of each bracket."

Travel issues are one area where the TMC was quizzed extensively. O'Leary said one superintendent said to him that if their school can play a similarly-sized team, a bus could be found and paid for.

The other question concerns the length of some tournament trips. For example, if a Northern Berkshire team has to play an early-round game at a school on the South Shore or on Cape Cod.

"What we've heard from a lot of the smaller school superintendents, and yes, money is tight," said Hart. "It's not an every-day travel. It's a one-time deal, or it might be a two-time. We're talking about something and we're trying to make it bigger for the kids as well."

The plan would put CBS Sports' MaxPreps.com, a third-party website, in charge of the seeding. MaxPreps has a proprietary computer program to handle the seeding. Games would be played on home fields or home courts until the state semifinal rounds.

However, if a home site were deemed not "up to standards," the lower-seeded team could possibly host a tourney game.

"The conditions need to be good. We need to be able to sell tickets. There needs to be acceptable lights if we're playing night games" outdoors, DiCarlo said. "If the higher seed isn't able to provide a venue that supports all of this, they're going to be able to have it within their control to have a venue that will do it for them."

"We've done two years of workshops across the state, changed things as we've gone along," said O'Leary. "We are looking for positive feedback, if there's something we missed."

MaxPreps is a national company that ranks college recruiting classes, high school rankings and handles the seeding process for several states for their respective tournaments. In a move announced along with the tournament proposal, MaxPreps will be handling the seeding starting in 2020. That change will come into effect no matter what, while the statewide tournament still has to be voted on.

DiCarlo said that the first objective is to equalize tournaments along gender-equity lines. She said that, using baseball and softball as examples, baseball has four divisions and softball has three. Under this proposal, baseball, softball, boys and girls basketball, football, girls volleyball and boys and girls soccer would compete in five different divisions. For Berkshire County schools, boys and girls tennis and lacrosse would all be in a four-division set up, while hockey would be in a three-division statewide plan.

"Power seeding will determine the 32 teams in each division," DiCarlo said. "Teams not seeded in the top 32, but meeting our 50 percent qualifying criteria will also be eligible for the tournament. That was the direct feedback from some of our colleagues, that they did not want to lose that 50 percent qualifying standard that we have in our system."

The top four teams in each division would be the No. 1 seeds in each bracket, and the brackets would be set up from there.

"The reason why, when we started this, that we went out to everybody — the professionals in every different category — is that we didn't have every answer," Burlington's Hart said. "We said this is what we're thinking. We took all the thoughts, put them together, mashed them out and we came up with a product that we think is a phenomenal product. I won't sit here and tell you that we mastered every single piece. It would be foolish for us to say it. We know there is going to be something along the way that will come up that we will have to sit back with another group of professional people and say 'What's the best way to handle it?' and 'What makes the most sense for the kid' and how do we want this to go because this is the way we're going."