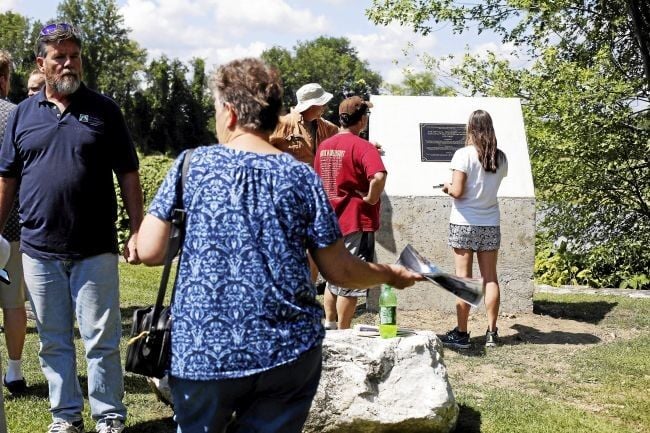 Stephanie Zollshan — The Berkshire Eagle A monument, paid for by Sheffield community members, has been erected at the spot of the famous 1969 UFO mass-sighting near the Sheffield covered bridge. 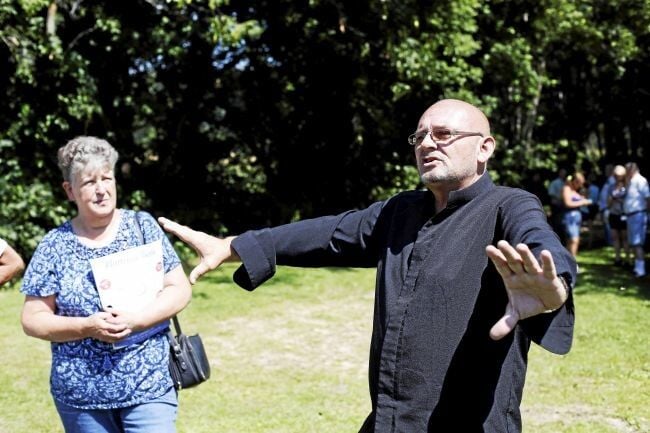 Thom Reed describes his experience as a 9-year-old in Sheffield in 1969 when he, his brother, mother, and grandmother all witnessed and came in contact with what they and others in the town describe as a UFO in a field near the Sheffield covered bridge.

Stephanie Zollshan — The Berkshire Eagle A monument, paid for by Sheffield community members, has been erected at the spot of the famous 1969 UFO mass-sighting near the Sheffield covered bridge.

Thom Reed describes his experience as a 9-year-old in Sheffield in 1969 when he, his brother, mother, and grandmother all witnessed and came in contact with what they and others in the town describe as a UFO in a field near the Sheffield covered bridge.

Monument for UFO sighting in Sheffield

SHEFFIELD — First affirmation as a historical event came by an adjacent town's historical society in February, and now a 1969 UFO siting in Sheffield is again affirmed with a 5,000-pound granite monument paid for by witnesses.

Around 40 people gathered on Wednesday to view the new monument, located near Sheffield Bridge on North Main Street. Among them was Thomas Reed of Kentucky, the former resident who says he and his younger brother saw a UFOs here in 1966, 1967 and again in 1969.

"It's a good spot, about 300 yards away from where we saw it," Reed said of the monument's placement.

The monument commemorates the 1969 siting, reported then by local radio station WSBS after a number of callers said they saw a lighted object making irregular motions in the sky.

It's also the siting that convinced Great Barrington Historical Society to the degree it, by a six to three vote, deemed it an "off-world incident ... historically significant and true," and worthy of admission to its archives in February. Dissenting members, though, were "strongly" opposed to admitting the material.

GBHS based its decision on documentation from the radio station, several eyewitness accounts (people from Sheffield, Great Barrington, Stockbridge and South Egremont are said to have witnessed the object and some gave testimony to the U.S. Air Force) and polygraph results on Reed showing a 99.1 percent truthful reading under questioning about what he saw.

"I know what I saw and a lot of people in town and other towns know what they saw, too," Reed said on Friday. "People from four towns could not see the same thing on the same night if it wasn't there."

Some media covered the GBHS decision as the first officially recognized off-world case in history. And the monument's funders have ensured that visitors comprehend the gravitas of the recent GBHS recognition.

The inscription on the monument hails the "official induction" of "our nation's first off-world/UFO incident." And by virtue of the GBHS decision, the inscription notes, the event now resides alongside Paul Revere and the Boston Tea Party in the annals of Massachusetts history.

Reed recounted the aftermath of the 1969 event.

"We didn't even know other people had seen it until days later when we heard it was on the radio and people were coming into my mother's restaurant saying what they saw," Reed said. "It was a reckoning, as far as I'm concerned."

In conversation, GBHS Director Debbie Oppermann explains her organization's rationale in accepting the material using a variety of phrases.

"We decided we were going to have the ability to say yes to new ideas," she said. The organization "is very passionate about local history," but "not in a million years" did she expect to be dealing with UFO material.

"They've not fallen into the typical fare of historical societies," Oppermann said.

The decision, she said, was "kind of scary."

And since the vote was taken, Oppermann said, GBHS has been receiving lots of feedback: A "mixed bag" of people who praise the organization for a "brave" choice and the "skeptics, who are greatly disappointed we would give it any attention."

The director acknowledged that the decision has and will only continue to increase public attention to GBHS, something that the group hasn't seen before.

"Nobody's asking about the last musket ball we found, that's for sure," Oppermann said.

She also said the organization, in perhaps a year, plans to hold a small conference on UFOs.

Reed said the magnitude of decision has not yet been fully understood — adding that it's likely to increase tourism in Southern Berkshire.

A 2013 HuffPost/Youth Gov poll reported that 48 percent of Americans believe UFOs "could be a sign of extraterrestrial visitation." Similar results have been recorded in polls for decades.

Reed said his mother's restaurant, in 1969, was similarly "divided" on the nature of the occurrence as well.

But, he said, there is no doubt the event has altered the "progression of the town."

"Women and children were drawing pictures of UFOs," Reed said. "There was a lot of buzz around. The radio station got flooded. This was a true event. It wasn't just [me and my family]."

In speaking with The Eagle, Reed did not discuss he and his brother's stories about earlier sitings, in 1966 and 1967.

Not always received well, these involved not only UFO sitings, but bizarre encounters with strange beings — the telling of which caused a young Reed to "ride my bike to school alone" for some time, he admits.

But then the 1969 siting — reported by 40 or more people — diminished the stigma, according to Reed.

The Reed case has enjoyed comparatively high currency among similar UFO incidents in the U.S. — mentioned in a United Nations General Assembly discussion on UFOs in 1992 and the subject of multiple television shows on the Discovery Channel and other major networks.

Reed attributes this to the social standing of his family.

His father, a successful attorney and Select Board member in Canaan, N.Y., was planning a book on the family's experiences in Sheffield before he died in 2006. His mother operated a restaurant and a farm. And Reed himself founded a successful talent agency called Miami Models in Florida.

Thomas' brother, Matthew, lives in Indiana and has also spoken to media in recent years about his experiences, though he has been less forward than his older brother.

In closing, Reed offered this advice: No matter how one feels about the town's UFO history and the GBHS decision: "Just enjoy it.

"Let's have a big barbecue next year, bring some people to Sheffield and Great Barrington," Reed said.

SHEFFIELD — Arno Pinsonnault and Kathy Silliker, of Springfield, were supposed to be married at the Thom Reed UFO Monument Park in Sheffield o…