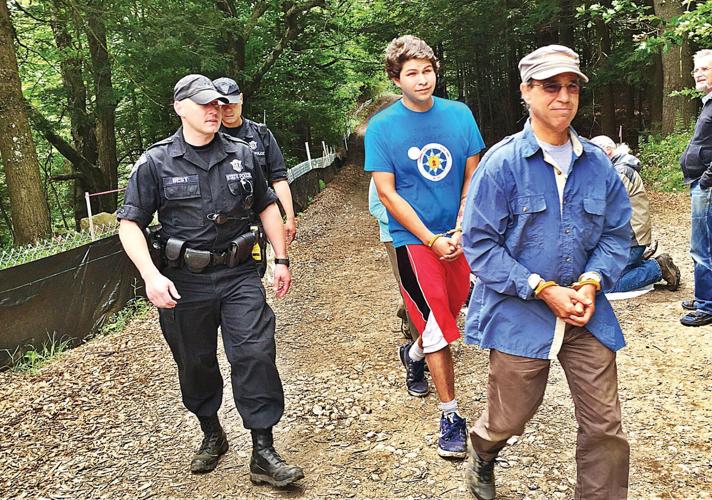 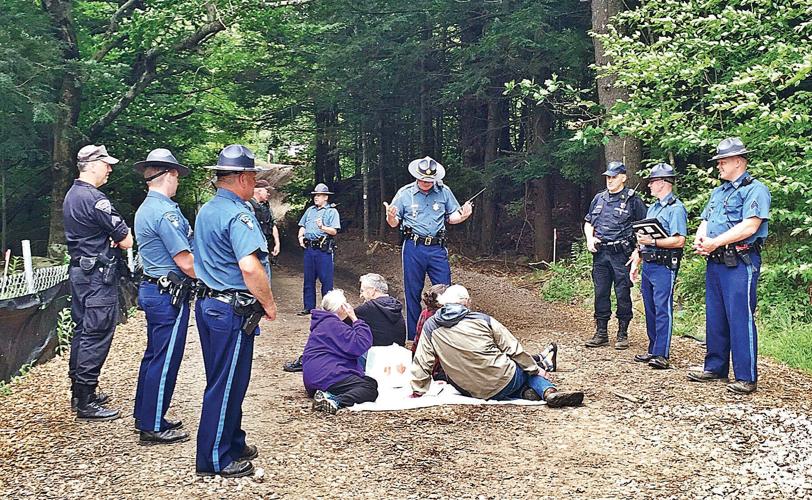 State police Capt. John Penniman tells picnicking anti-pipeline activists that they are trespassing on the pipeline work access road and asks them to move or face arrest.

State police Capt. John Penniman tells picnicking anti-pipeline activists that they are trespassing on the pipeline work access road and asks them to move or face arrest.

SANDISFIELD - There were some new faces at Otis State Forest Saturday, and they've come here from Standing Rock in North Dakota, they say, to continue fighting another pipeline.

"They called and we answered," said Alvin Grassrope, referring to the climate justice group, Sugar Shack Alliance, of which 22 more members were arrested for trespassing into pipeline work areas on Saturday.

While Sugar Shack activists were being handcuffed by state police and loaded into a van, Grassrope, a Lakota Sioux Indian, told The Eagle he and Antoine American Horse were from the Standing Rock Indian Reservation, the center of a massive protest entrenchment began last year by the tribe and activists nationwide over Energy Transfer Partners' Dakota Access Pipeline.

The Lakota Sioux resisted the path of that 1,172-mile crude oil transmission line, saying it cut through tribal areas of cultural and religious significance, as well as a tribal water source. The pipeline was completed last spring, and is now active.

"It's going to be a big problem," Grassrope said of Tennessee Gas Pipeline Co.'s 13-mile Connecticut Expansion Project, two miles of which run through the state forest here.

The two young men have never been east. "I love it here," American Horse said. "I'm a plains Indian so I'm not used to all the trees."

This small section of the Kinder Morgan Subsidiary's $93 million natural gas storage spur is drawing the attention of activists nationwide to this wild corner of the state.

The tri-state project ignited outrage among residents, activists, state and local officials for a host of reasons, including a court-win by the company for an easement here, where state forest was cleared for this third pipeline in an existing corridor.

Saturday's 22 peaceful arrests for trespassing on what is a temporary work easement bring the total since early May to 52.

The state has been dropping charges against the activists from criminal to civil, making it akin to a parking ticket, but in this case, one that has had interesting legal twists.

On a day of rallies, speakers and music that drew around 90 people to the area, things turned chaotic at company access roads, as several groups who said they were "reclaiming their state forest" took off into company work areas, where pipe-laying work was underway.

Around 20 members of law enforcement filed out of police vans up and down Cold Spring Road to arrest activists who had picnics on an access road, and others who had gone deeper into the forest to picnic on the work easement.

American Horse, a "kitchen boss" from Cannon Ball, N.D., watched and nodded in approval while he and Grassrope videotaped the arrests.

When asked how long he and Grassrope were staying in New England, American Horse said they were "here for the long haul."

And that long haul, he added, is the duration of what the company has said would be a six-month project. That would put completion somewhere in the fall.

Grassrope and American Horse said they are staying with Karyn Redwolf, a Native American climate justice activist who lives in Central Massachusetts, she said. Redwolf said the inclusion of "indigenous peoples" into the environmental movement was critical to make changes.

"There's fear of other people," she said. "We need to be one. Let's get through this healing process together, then though unity we can do anything."

She noted the presence of Native American stone groupings that have been identified along this pipeline path, and said that was only part of the reason she, American Horse and Grassrope had come.

The groupings are called "Ceremonial Stone Landscapes," and were identified by tribal historic preservation officers of several tribes including the Narragansett of Rhode Island. Tennessee Gas has said it has fenced off some for protection and is working around them.

Others have to be dismantled and reassembled, something that has angered the Narragansett preservationist, who said it is desecration of what has religious and cultural significance, and a violation of the federal Historic Preservation Act.

An attorney for the Naragansett previously told The Eagle the matter may end up in court. Depending on the outcome, said Anne Marie Garti, it could change the way the Federal Energy Regulatory Commission and pipeline companies deal with such sites along a transmission route.

Redwolf said she and other Native Americans are also joining this fight to keep the spirit of Standing Rock alive.

"It's how to keep the fire burning in each of us," she added.

And when asked how he was going to help this movement against this pipeline, American Horse shrugged and said the plans are classified.

"But the possibilities are endless," he added with a grin, as he watched another round of arrests.

at Otis State Forest, for trespassing into Tennessee Gas