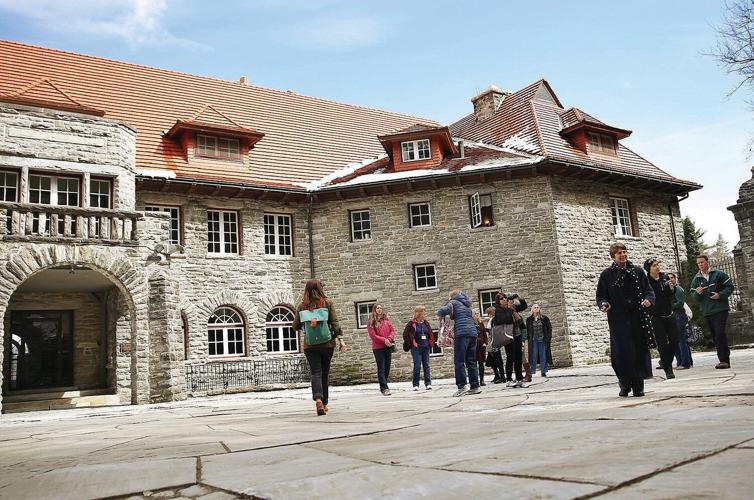 Southern Vermont College has released additional details about the school's financial condition. The school has announced it will close at the end of the spring semester. 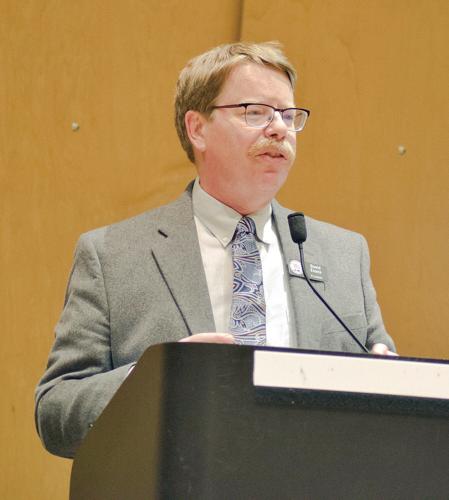 Southern Vermont College President David Evans has released additional details about the school's financial condition. SVC has announced it will close at the end of the spring semester.

Southern Vermont College has released additional details about the school's financial condition. The school has announced it will close at the end of the spring semester.

Southern Vermont College President David Evans has released additional details about the school's financial condition. SVC has announced it will close at the end of the spring semester.

BENNINGTON — Southern Vermont College has released more details about the school's debt and financial condition, but officials don't plan to post all of the most recent audit information before May.

SVC President David Evans responded this week to many of the questions raised since the college announced March 4 it would close after the spring semester because of falling enrollment and mounting financial difficulties.

The New England Commission of Higher Education, which held a show-cause hearing Feb. 28 on the problems, voted afterward to withdraw the college's accreditation as of Aug. 31 — citing a failure to meet the accreditation standard for financial resources.

Evans described many of the financial issues SVC faces as the Bennington campus and the 340 students struggle through what is expected to be the final spring semester.

He said college officials are expected to meet soon with the holders of about $6 million in bonds issued to SVC in 2011 to fund part of a new dormitory project and other campus improvements. That meeting will be with representatives from Community Bank and the Bank of Bennington.

"We will know more then," Evans said. "They [the banks] have a mortgage on the main campus, which is appraised at considerably over the total debt outstanding. How they choose to proceed with us is an open question. We have had preliminary conversations with the banks."

According to Bennington Assessor John Antognioni, the assessed value is $9,028,900 for the campus buildings and the surrounding 371 acres. He said the admissions office at 897 Monument Ave. is assessed at $369,900.

"There has been some vague interest in the facility, but nothing specific so far," Evans said. "I think there's a pretty good possibility that the main campus can cover the debts, but it's an odd market, as you can imagine."

He added, "We are not currently acting on asset disposal until we understand the banks' position better."

Of the total of about $6 million in debt, most is held by Community Bank, he said.

"I think the Bank of Bennington holds about one-eighth of it altogether," Evans said. "If that's right, their current balance is around $750,000."

He added, "The bond dates from 2011, and it refinanced a private loan from an individual. In addition to the construction of Hunter Hall (the new dorm), it financed a variety of minor improvements as well — repair of the patios, paving of Mansion Drive, some lighting and other things."

Regarding other debt, Evans said, "Our overall outstanding debt, including current payables but excluding the bond, is probably less than $300,000."

No other creditors have contacted the school, he said, "although some have asked that we pay in advance for certain goods and services, which we are doing."

Concerning release of the college's most recent audit report, Evans said Monday that "our accountants are currently using our [2018] audit to create our 990 [IRS disclosure form for nonprofits], which will come to us around the end of April for board approval in May. Once the board [of trustees] approves it, we'll submit it, at which point it becomes a public document and I'll be glad to share it."

Plans for reducing the workforce and winding down the college programming are progressing amid attempts by some alumni and others to rescue the small private school or convert it to a state institution or other viable alternative.

"I know [Sen.] Brian Campion is interested in working with the state colleges," Evans said. "I've talked to him at some length. If that resulted in keeping SVC going in some recognizable form, I'd be highly supportive."

He added, "There are some other possibilities under discussion, though these are big, complicated projects on a very short timeline. I am devoting as much time as I can in light of the other things going on to pursuing them."

The college's main focus, SVC officials have said, is in assisting students to either transfer to other institutions or complete their degree at SVC before Aug. 31.

Meanwhile, alumni and others have mounted a petition drive to lobby Gov. Phil Scott and the Legislature to "Save Southern Vermont College", which has nearly 1,500 signatures as of Wednesday morning, and a GoFundMe drive attempting to raise money to appeal the NECHE accreditation decision and otherwise toward keeping the college open.

"I am very grateful to the college's friends and supporters for seeking to fund an appeal to NECHE," Evans said. "However, it is important to note that the allowable grounds for appeal are almost wholly procedural, and not substantive — in other words, technically any new evidence is formally not part of an appeal. The deadline to file is this Thursday (March 14), so time is very short."

He said that, "Under appropriate circumstances I would certainly aggressively pursue an appeal, but I believe, as do our attorneys and other consultants, that it would require an immense amount of money and/or a very clear and highly probable path towards financial stability for it to succeed."

Referring to a past SVC appeal of an accreditation decision regarding the school's nursing program, Evans said, "A key difference between the nursing accreditation appeal in 2012-2013 and the current situation is that in the earlier case, the accreditors committed clear, significant procedural errors that enabled the college to argue successfully that the process was flawed and unfair to the college. While I certainly wish that the NECHE process had unfolded differently, neither the college's attorneys nor I can identify procedural problems sufficient to support the argument that SVC was treated inequitably."

Campion and other Bennington area lawmakers have said they will explore the possibility of the state college system using the SVC campus. Currently, there are no four-year public Vermont institutions in Southern Vermont, although Community College of Vermont and Vermont Technical College have satellite facilities here.

"It's an interesting idea," Evans said Wednesday, "but given that the state colleges are already tremendously underfunded, I am not sure how practical it is, though for economic development and workforce reasons it could be an excellent move for Vermont. I am happy to have further conversations about this possibility and others, but currently the key imperative is for our team to focus on helping our students and employees, and managing our legal, regulatory, and financial obligations properly."

He added that "contrary to what has been asserted by some, we have not 'given up,' but our duty is to act prudently and ethically in the face of the information that we have, and that has been our guiding principle throughout."

SVC also is "looking at a couple of possible plans for the college, but they are long shots," he said. "So far, there is nothing concrete that does not involve educational use."

Some college employees, though not faculty, have received layoff notices.

"Currently, the 30-day notices are going primarily to people whose current job is looking forward to next year — out-of-season coaches, admissions recruiters, etc.," Evans said, adding that all faculty are under contract until the end of the school year.

"The faculty handbook allows for severance, theoretically at my discretion," he said, "but we'd need to identify funds for it. We have not granted severance to anyone in my time here. It's important to note that faculty are paid through about mid-August for the work they do this academic year — it's basically a 9- or 10-month contract paid over 12, so they are due that salary even without any other severance. My contract actually requires severance, and I have had some initial discussions with the board about that."

Evans said staff members still are still working with the trustees on how to assist students needing a few credits for graduation through Aug. 31. Officials "are not sure yet exactly how that will work," Evans said. "We are expecting that students will take courses elsewhere and transfer them back. The continuation of campus operations is also still under discussion."

Concerning donations the college has received, he said, "Over the years SVC has received many donations. The great majority of these have been made to be used for whatever purposes the college found most useful. Others have had various stipulations attached, and these need to be examined individually."

He said there may be "one or two small mechanic's liens, but nothing major. I don't believe we need to return any donations — the latest ones have been made and received under an agreement about their disposition and what they are supporting. It's always possible that previous donors may raise issues that we do not currently anticipate. Obviously, those would each be a unique situation if any arise."

The Wagner House [admissions office] gift "was subject to some constraints, as was the [Laumeister Center for the Arts]," Evans said. "Though they are part of the college's net assets, we do not currently believe either of them is in the collateral package for either bank."

He has said the arts center off Route 9 could only be sold to a nonprofit organization under terms of the 2017 gift agreement with center founder Bruce Laumeister.

"The art center is separately appraised, and its appraisal was around $4 million, independent of the collections that came with it," Evans said. "Nowhere near all the contents were given to us — just a small fraction."

The college is still working on a plan for what to do with the art center, he said.

"We are considering how to go forward with the art center, and recognize its importance to the community," Evans said. "We have had some general conversations about the center, but nothing definitive so far. There are a variety of restrictions on it, including that it must remain a nonprofit and a community art center, and we certainly will act within those parameters."

Evans said he believe attorneys representing the college will be in touch with the Vermont Attorney General's Office concerning the closure. "We will be sending a whole array of required official notifications in the next few weeks," he said.

According to Jamie Renner, an assistant attorney general with the office's Public Protection Division, the college has yet to contact the AG's Office. But he said that normally the office's oversight role doesn't come into play until assets of a nonprofit are dispersed, before which there are some notification requirements.

The office then typically works with nonprofit leaders as needed to help the organization conform to statutes for disposing of assets and dissolving the entity, he said.