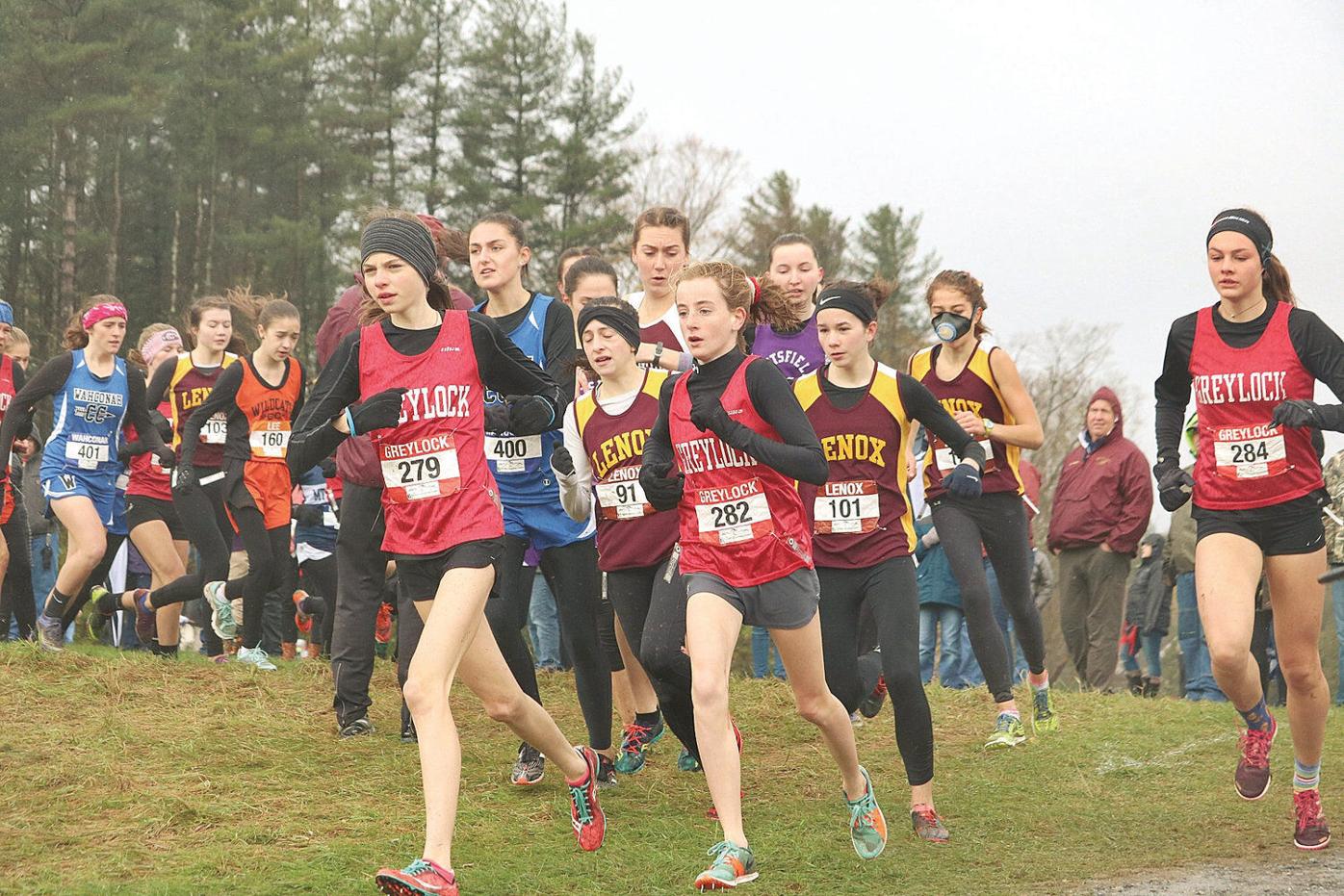 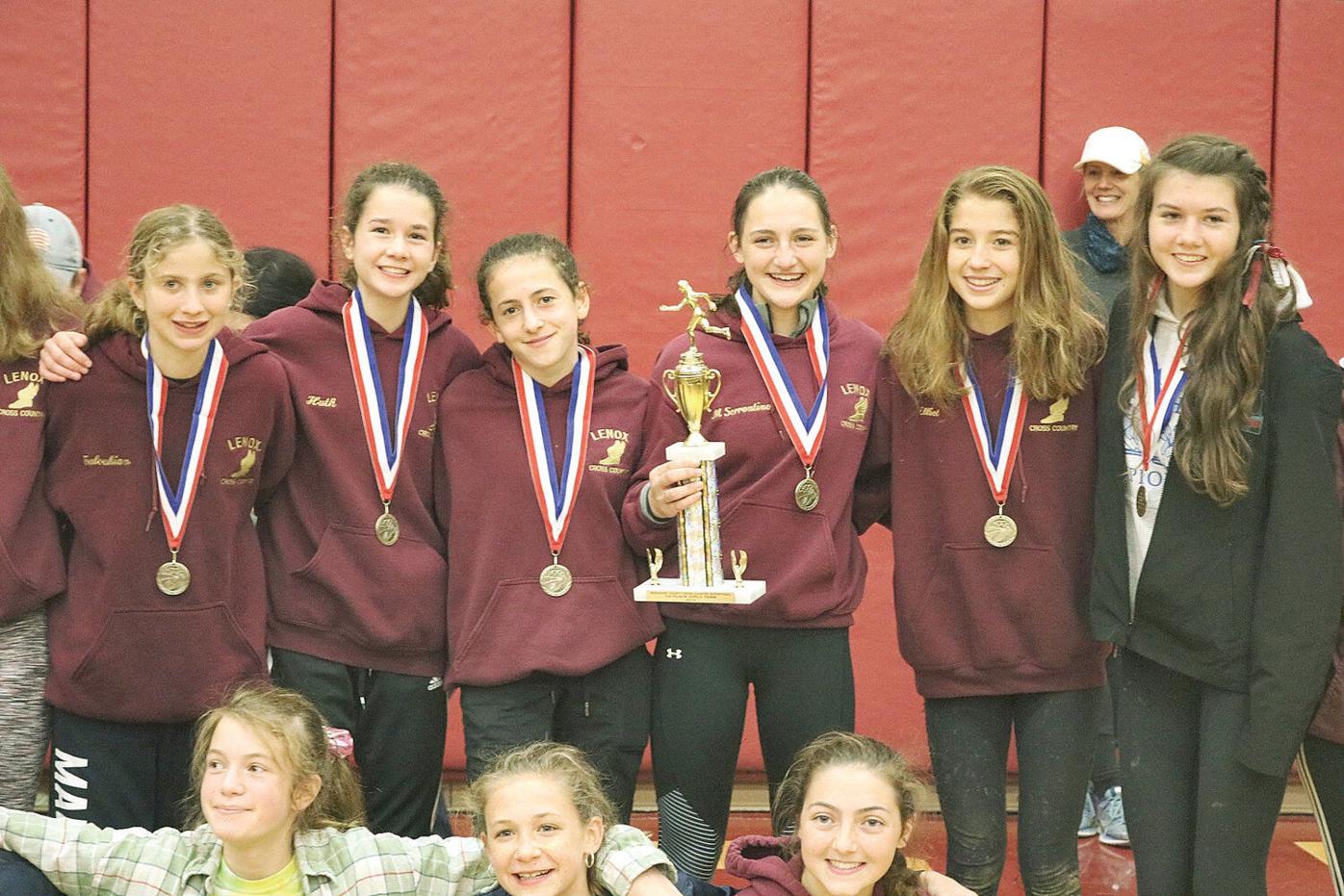 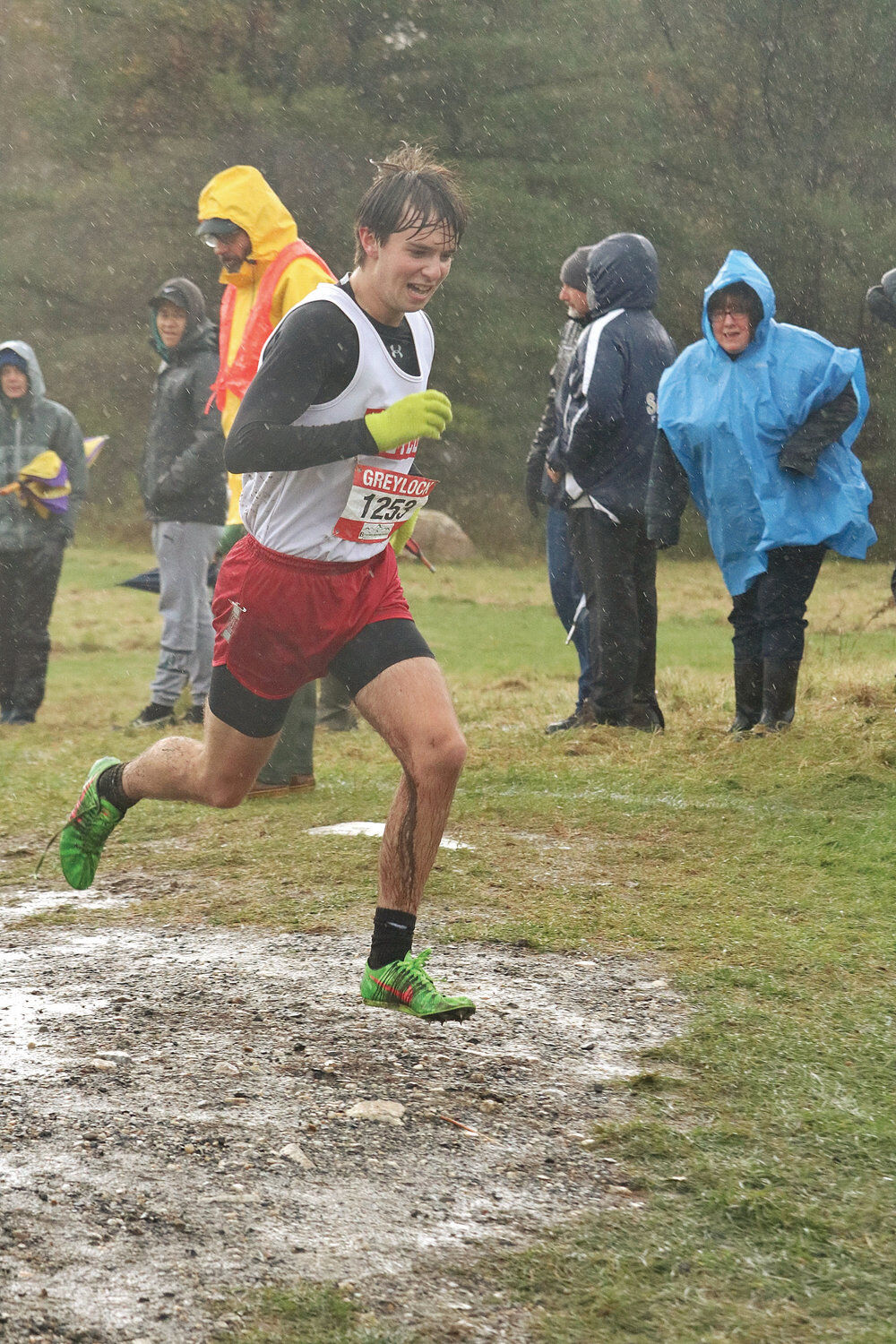 With an untied right shoe and through a freezing rain storm, Mount Greylock senior Jesse Seid repeated as Berkshire Individuals champion at Lenox on Saturday. 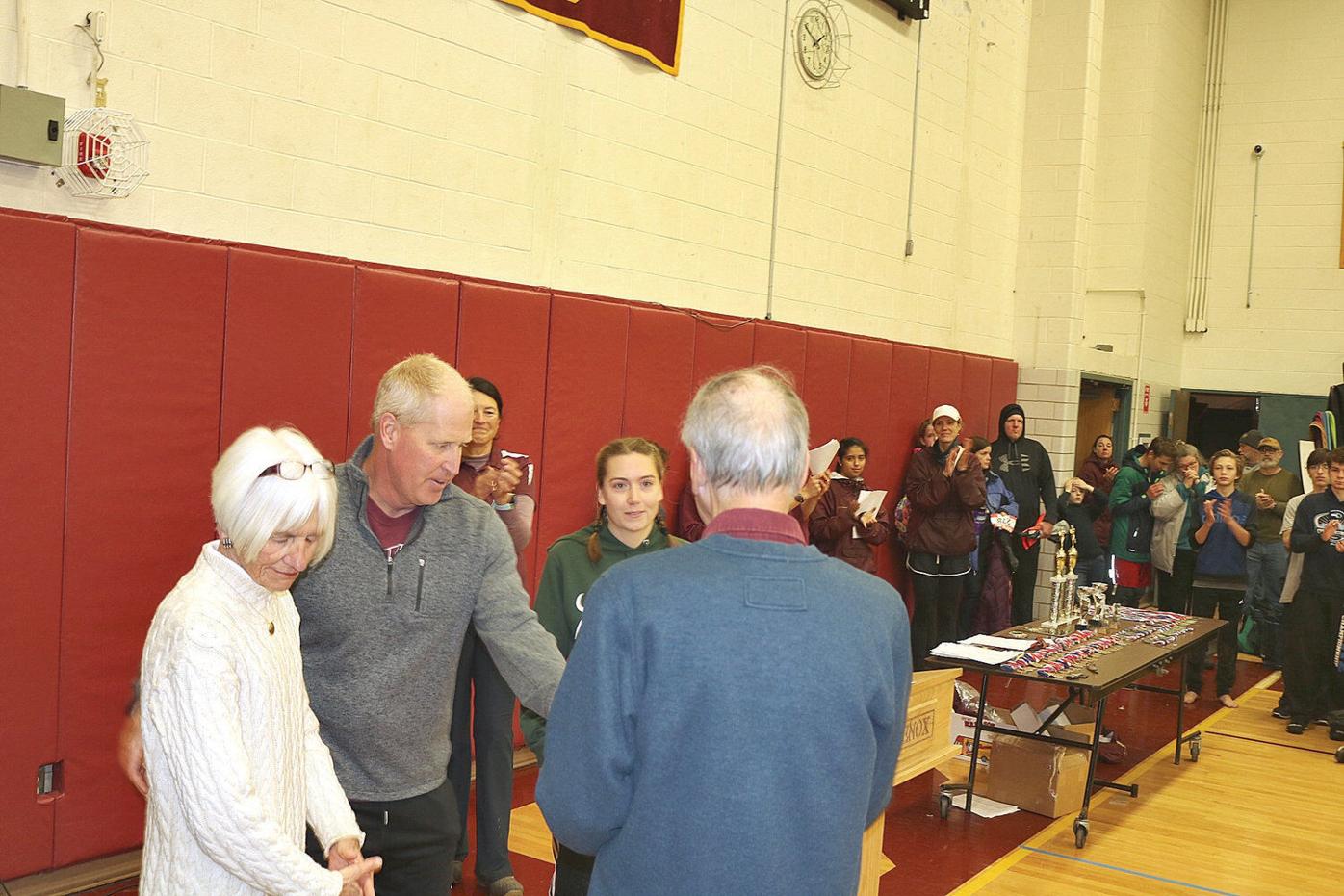 With an untied right shoe and through a freezing rain storm, Mount Greylock senior Jesse Seid repeated as Berkshire Individuals champion at Lenox on Saturday.

LENOX — There's no substitute for experience.

Whether it's repeating as Berkshire Individuals champion and Berkshire County MVP, coaching a team to a sixth or seventh consecutive local crown, or simply running a hill you've run a couple hundred times before.

It was a wet and frigid morning at Lenox Memorial Middle and High School for the 2018 Berkshire Individuals meet. Before spikes and tank tops could become rain boots and hoodies, the county's top cross-country runners had to grind through a muddy Lenox course.

Mount Greylock senior Jesse Seid said he was running scared, but as he crested the final hill, there was nobody in front of him for the second consecutive year. Seid repeated as Individuals champion in 17:26.83, and later was awarded his second straight MVP trophy.

On the girls side, Greylock freshman Josie Smith took home the major individual prizes, winning the race in 19:49.51 and earning the season MVP award.

"Whenever I come to this meet, I'm running scared. The competition level is so high. My teammates carried me, and hopefully I carried them a little bit," said Seid. "I didn't want to look back, but I knew people were coming behind me.

"We had a job to do. Came here and we just ran a Greylock race."

Mount Greylock repeated as team champions on the boys side for the sixth consecutive season, with Seid, Josh Cheung and Oliver Swabey snaring the top three individual spots. Theo Sandstrom and Jakin Miller were 12th and 13th, giving the Mounties 31 total points. Greylock finished out an undefeated regular season with a Berkshire North championship as well.

"You have to run a little bit different when the weather is like this, but these kids are great," said Greylock coach Scott Burdick. "On a day like today, all bets are off. You have to take what the race gives you, can't fight it. That was our philosophy."

Greylock put all seven of its varsity runners in the top 20, and bested second-place Taconic by 49 points.

It was still a victory of sorts for the Braves, who have their sights set on doing some damage in the Western Massachusetts Division I race, while the Mounties look to dominate D-II.

"I was really nervous. It was rainy, muddy. I hadn't made All-Berkshire before the race, so that was extra motivation," said Taconic senior Brandon Pelkey, who placed sixth overall. "Second place for the first time in maybe five years. We had been calling it the third-place curse."

Taconic was without a varsity runner in Chris Adams, but still managed four guys in the top 20, and held off host Lenox by four points.

"I was feeling pretty good. My coach said not to go out too hard, let the field deal with the mud. I stayed back a little and then moved up second mile," said Pelkey. "It's a goal to make states as a team. It's going to be tough, but we've got a good two weeks to focus and keep working."

Lenox was led by sophomore Colin Young, who was the fourth runner in, before Monument Mountain's Peter LaRochelle finished out the top 5. Wahconah senior P.J. Pharmer finished seventh to help the Warriors to a fourth-place team finish. Wahconah also finished the regular season with a Berkshire South title.

Lenox's Max Adam was eighth as an eighth grader, while Mount Everett juniors Cole and Grayson Duval squeezed into the top 10 with sub-19 minute times to earn All-Berkshire nods.

Experience won the day in the girls races as well.

Despite the Mounties finishing the regular season unbeaten and claiming a Berkshire North title, it was far from an upset for a Lenox program that repeated at Individuals for a seventh consecutive crown.

"You just never know what can happen," said Lenox coach Jeanne Teasdale. "We ran really well at an invitational last week, and we just sat the girls down and told them to have fun today."

The Millionaires clung to the one-point victory on the legs of two seniors in Maggie Sorrentino and Marion Huth, who have been working out on their high school's course for years.

Sorrentino placed ninth overall and was the fourth Millionaire in, but it was her ability to climb the steep hill behind the school on the final straightaway that gave Lenox an edge. She drove past Mount Greylock eighth-grader Ainsley Abel and bolted the final 100 meters to the finish line two seconds ahead of her young foe.

"I love our course. It's been such a great six years and this whole day was surreal," said Sorrentino. "My dad used to be the coach here and he put that hill in the course, and everybody used to blame me. But I was thinking about him and how much support he's given us, and I was just able to kick it in."

Marion Huth rounded out the Lenox scoring in 16th overall, slipping in 14 seconds ahead of Greylock's Miriam Bakija.

"It's exciting. It was totally a surprise," she said. "I knew Maggie and I had to stay close to each other. We really try to have a tight space. I didn't go in thinking I needed to be somewhere. We just tell the girls it's about doing your best and it'll be worth it."

Ellen Huth placed second, seven seconds behind Smith, who has been a runaway train from start to finish this season.

"Over the summer I would see her out running back country roads. In the middle of nowhere, there would be Josie," said Greylock coach Hilary Greene. "She just figured it out. You could see with all our workouts she could handle the faster pace, because she had that base."

Lenox took the third spot in the race, with freshman Grace Elliot grinding to the finish in front of 2017 County MVP Grace Phair, a senior at Monument Mountain.

After Pittsfield's Cami Diehl and Wahconah's Haley Crosier finished neck-and-neck, it was Lenox's Ava Bachman just in front of Sorrentino. That gave Lenox 22 points with four runners in.

Greylock finished out it's scoring slate first, with Abel in 10th, Margo Smith in 11th and Hazel Scullin in 12th, but Jackie Wells' No. 13 spot didn't factor in as the sixth Mounties finisher. Greylock sat with 39 points, while Marion Huth made her way up her home hill for the final time.

"We could see that they've been inching up. I'm not disappointed in any way, because our girls didn't run poorly by any stretch," said Greene. "Their girls just ran great.

"Hopefully this will absolutely fire them up, though, and they'll come back strong with training these next two weeks."

Wahconah, which added Gabby Orlando in 14th and Danni Orlando in 18th to Crosier in the top 20 and All-Berkshire team, placed third with 86 points. Megan Francoeur joined Pittsfield teammate Diehl on the All-Berkshire team with a 15th-place finish. The Generals were fourth with 92 points.

Taconic, which didn't have enough finishing runners to score, was led by Calie Champoux in 30th and repeated as Berkshire South champions.

After coaching the Spartans girls program for the last 10 years, Unsworth passed away this summer.

Teasdale gave an emotional introduction to the awards ceremony, and opened by saying the county coaches had voted unanimously to induct Unsworth into the hall of fame. Monument boys coach Ted Collins, with help from Phair, gave a plaque to members of Unsworth's family in attendance.

Local teams now have two weeks off to prepare for the Western Mass. championships, which are slated for Saturday, Nov. 10 at Northfield Mountain Recreation Center. Girls will race first beginning with Division I at 11 a.m., then Division II at 11:40, followed by the two boys races at 40-minute intervals.

"We always want to be running our best at the end of the season," Greylock's Burdick said. "Things are going very well, the guys are all healthy, in good shape. They executed perfectly today.

"We love this weather. The only people who don't like the rain are people who are dry."

Any qualifiers will advance to the state meet, which will also be at Northfield Mountain on Nov. 17.