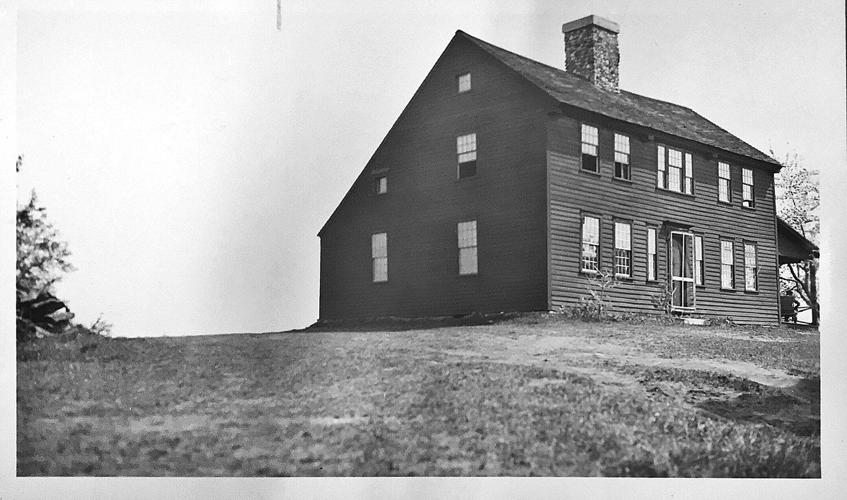 Burgoyne Trail Associates was located on the former Capt. Isaac Norton farm in Otis. The pre-Revolutionary period farmhouse had a sun porch added to it on its eastern side by the association. The nudist colony also built tennis courts and a pool on the property.

Henry S. Huntington was a founder of the nudist colony Burgoyne Trail Associates in Otis. He served as the director of the group from 1933 to 1946.

Burgoyne Trail Associates was located on the former Capt. Isaac Norton farm in Otis. The pre-Revolutionary period farmhouse had a sun porch added to it on its eastern side by the association. The nudist colony also built tennis courts and a pool on the property.

Henry S. Huntington was a founder of the nudist colony Burgoyne Trail Associates in Otis. He served as the director of the group from 1933 to 1946.

During the summer of 1933, Otis was invaded by a nudist cult.

At least that's how a headline in the Boston Globe on May 24, 1933, described the pending establishment of a nudist colony in the township with a population of 367.

The following day, a headline published in The Eagle, stated just the opposite: "No Nudist Camp at Otis Colony, Will be 'Health Center with Sun Baths.'"

"The club will be conducted on the highest plane of moral and ethical standards, just as you would expect a first-class family country club to be run. The most approved principles of modern European health movements will be established," The Eagle's article stated.

The colony, known as Burgoyne Trail Associates, would indeed be a nudist camp, one of the first in the country and one of the most exclusive. (And one of its founders would battle the U.S. Post Office all the way to the U.S. Supreme Court and win the right to distribute uncensored nude material through the mail.) Its founding membership included, the Boston Sunday Advertiser reported, "at least one Harvard don, two State Street attorneys, several Back Bay doctors and many women of wealth." Other prominent Bostonians in the mix were "actresses, architects, engineers, tired businessmen, a number of professional women and several 'new thought' clergymen." And some of those members, The Eagle reported in 1941, stayed in Otis while in town for the Berkshire Symphonic Festival.

"The Festival visitors arrange their schedules so they may enjoy the out-of-door life at Burgoyne Trail and the music at Tanglewood, too."

Members of the club, who were called "associates," traveled from as far away as California, Louisiana and Canada to stay at the 350-acre resort, paying $20 for a weekend or $1,000 for a lifetime membership. (In today's funds, it would cost $394 for a weekend pass and $19,703 for a lifetime membership.) The price and the location offered anonymity and privacy for those choosing to partake in the so-called cult of nudism.

But if anyone doubted the intentions of Burgoyne Trail's founders, Henry S. Huntington and Ilsley Boone, they would be disappointed to learn that each became involved in the practice for its health benefits, both physiological and psychological.

"A person feels better after only one week here. It makes a person feel as if he has had at least a month's vacation," Huntington, of Scarsdale, N.Y., would tell reporters.

Boone, a Baptist minister from New Jersey, in conversations about the benefits of nudism, would often cite the work of Swiss physician and climatologist Auguste Rollier — who was known for his successful treatment of skeletal tuberculosis by heliotherapy — as proof the lifestyle was anything but salacious.

"All physicians know of Rollier's marvelous work in curbing tuberculosis by exposing the body to air and sun. The extension of this curative movement in Europe has awakened many people to the advantages of commonsense, outdoor, normal life and serve as a preservative of health, rather than a curative agency," he told The Eagle in 1933. Boone remained a strong believer in overall health benefits of nudity, exercise, sunbathing and vegetarianism throughout his life.

Huntington, a Yale graduate and Presbyterian minister, told a Springfield civic group, during a speaking engagement in 1934, that one of the greatest arguments for nudism is "it frees people from obsessions concerning sex under which, in conventional society, they are accustomed to labor."

"He said that he and his wife had become nudists for the sake of their children, who through experience, had eliminated the problem of curiosity from their lives," The Eagle reported.

Huntington would tout the health benefits as well, claiming "getting sunshine while naked we can assimilate the calcium we take in our foods. By wearing clothes all of the time we fail to get the Vitamin B to assimilate it."

Even exercise is better and "more valuable" without clothes, he said. "The air evaporates sweat. People can play tennis and all sports without getting so tired if they are not attired."

Those who applied and achieved membership (its founders claimed they turned down four out of every five applicants), would quickly learn that Huntington and Boone were quite serious about there being no hanky-panky at the resort. Rules at the resort, as well as at other nudist camps in the American Sunbathing Association (of which Boone was president), included complete abstinence from alcohol while on the premises. They also required a married man or woman, attending the colony individually, to have written consent from their spouse.

"Even if a member had paid over $1,000 for life membership and had erected and improved an approved bungalow on the grounds," Boone said, "the possession or use of liquor would be punished by ejection from the grounds and cancellation of membership."

Huntington and Boone would go on to be two of the country's leading advocates of the nudist movement and publishers and editors of the nudist lifestyle magazines "The Nudist" and "Sunshine and Health."

Huntington, who purchased the 350-acre Norton Farm in 1933 (then the estate of Charles Robinson, an associate justice of the Connecticut Supreme Judicial Court), remained with the Burgoyne Trail until 1946 when he relinquished his directorship and moved to Philadelphia, where he spent his remaining years writing for "Sunshine and Health" and a book on the history of the nudist movement.

Boone would part ways with Burgoyne Trail in its early years, establishing Sunshine Park, a nudist camp in New Jersey. He would serve as president of the American Sun Bathing Association, now known as the American Association for Nude Recreation, for 20 years.

Burgoyne Trail existed until at least 1947, when the land was sold by Huntington and its trustees to Frederick and Seena Purdy for $18,500. Burgoyne Trail ceased to exist following the sale of the property in 1947. The property passed from the Fredericks to the Blue Trail Council of Girl Scouts Inc. in 1959 for $80,000. The Girl Scouts operated Camp Sequena on the property. It was again sold in 1972 to Otis Wood Lands Inc., a year-round vacation home community that continues to exist today.