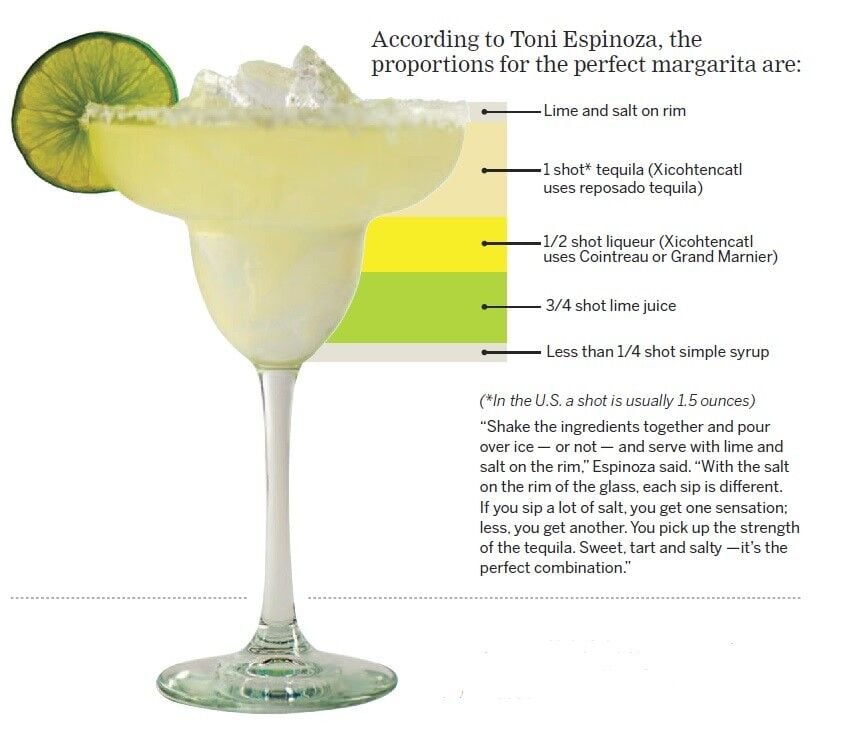 What goes into making the perfect margarita? tequila, a liqueur (Triple Sec, Cointreau or Grand Marnier), lime or other citrus juice and simple syrup, according to Toni Espinoza, co-owner of Xicohtencatl Mexican Restaurant in Great Barrington. 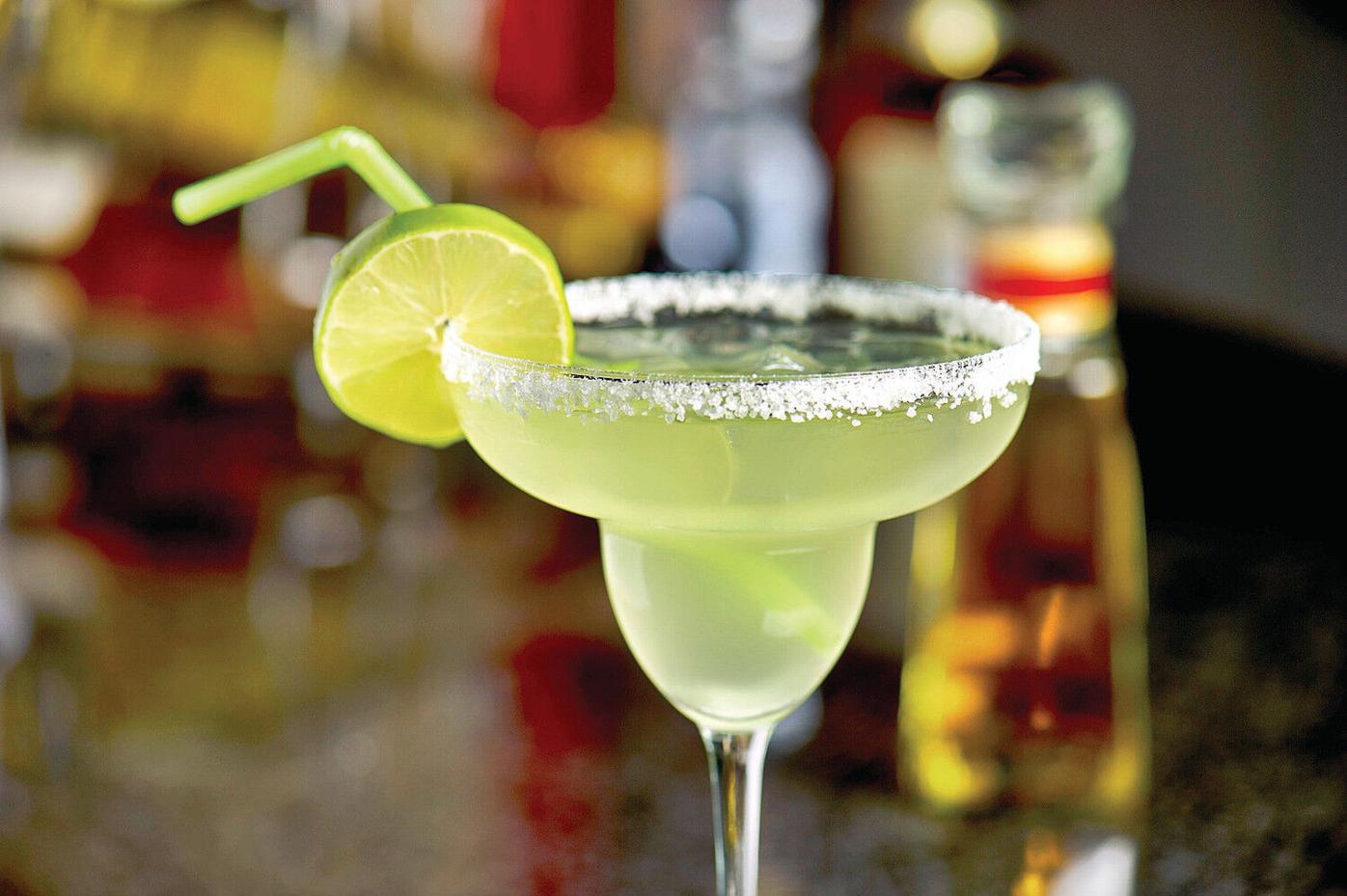 What goes into making the perfect margarita? tequila, a liqueur (Triple Sec, Cointreau or Grand Marnier), lime or other citrus juice and simple syrup, according to Toni Espinoza, co-owner of Xicohtencatl Mexican Restaurant in Great Barrington.

Thursday is National Margarita Day. To celebrate, round up your friends, put Tortured Soul's "We Like Tequila" in the CD player and sing along ... then head to your favorite watering hole for a margarita or two. (Bonus points if you know how many times the word "tequila" is said in the song. I counted 36.)

But first, a little history ...

"Tequila is a liquor made from the blue agave plant, which looks like aloe," explained Toni Espinoza, co-owner of Xicohtencatl Mexican Restaurant in Great Barrington. "All tequila comes from the blue agave plant." She added tequila originated in the mountains of Jalisco, Mexico, "There are tons of distilleries in Mexico, but not all export tequila to the United States."

Espinoza said there are three grades of tequila: "Silver, which is the purest. It's right off the plant and is unaged. Then there's reposado, which is aged for a short time — up to a year. It has a light golden color. Anejo is aged in an oak barrel for over a year and has a dark, deep color like scotch or bourbon. Anejo is usually drunk straight; it's a very rich drink."

There is also mezcal, which is also made from agave (but not necessarily the blue agave plant). "It's very popular, very hip right now. It's a little smokier than tequila and sweeter, and may be flavored with herbs and nuts," Espinoza said. She explained it is graded like tequila.

What goes into making the perfect margarita? "Four items — tequila, a liqueur (Triple Sec, Cointreau or Grand Marnier), lime or other citrus juice and simple syrup," Espinoza said. "The tequila has a really sharp taste; the liqueur, a smoothing taste; the citrus juice, a tart taste and the simple syrup, a sweet taste."

For those who want to try mezcal, Xicohtencatl offers a Mezcalita, using the same ingredients and proportions as a margarita, but substituting mezcal for the tequila.

'My favorite margarita is one we call 'El Diablo,' made with Milagro Reposado Tequila infused with jalapeno," Espinoza said.

To make your own jalapeno-infused tequila, place a whole jalapeno halved or sliced, along with some pieces of cilantro, into a 750ml bottle of tequila and let it sit for a couple of weeks. "The first time, you might want to use just half a jalapeno. It can be fiery," she warned.

To make a blueberry/raspberry margarita, Espinoza said to muddle two raspberries and two blueberries into silver tequila, along with the liqueur, lime juice and simple syrup.

"Pick a brand — Patron tequila, Patron Citronge Orange, lime juice and add any fruit you want, a handful or less, maybe 1/4 cup of fruit, and blend it. Don't use any simple syrup." Espinoza said.

For the house margarita, the Xicoh, add a splash or Grenadine to the tequila, liqueur and lime juice, leaving out the simple syrup as Grenadine is sweet on its own.

Xicohtencatl Mexican Restaurant is at 50 Stockbridge Road, in Great Barrington.

According to Espinoza, the proportions for the perfect margarita are:

"Shake the ingredients together and pour over ice — or not — and serve with lime and salt on the rim," Espinoza said. "With the salt on the rim of the glass, each sip is different. If you sip a lot of salt, you get one sensation; less, you get another. You pick up the strength of the tequila. Sweet, tart and salty —it's the perfect combination."

Kick back, grab the salt and limes, and enjoy a frosty drink while reading these facts about your favorite cocktail.

- ITS ORIGINS ARE MURKY

No one is quite sure who invented the margarita, but there are a lot of theories. The most widely spread rumor is that an American socialite named Margarita Sames created the drink for her friends in 1948. One of her party guests was Tommy Hilton, who added the drink to the bar menu at his hotels. This is probably not true, though: The first importer of Jose Cuervo used the tagline "Margarita: it's more than a girl's name" in 1945 — three years before Sames debuted her drink. The very first print mention we can find of the drink (but not the name) comes from the 1937 book Caf Royal Cocktail Book by William Tarling. The drink had a similar recipe but was called Picador (a type of bullfighter).

The origins of the cocktail are unclear, but the origins of the frozen margarita machine are pretty straightforward: Mariano Martinez invented the frozen margarita machine in the early '70s. The 26-year-old Dallas restaurateur was having trouble creating the frozen drink for customers; bartenders complained they took too long, and customers thought they melted too quickly. After seeing a Slurpee machine in a 7-Eleven, Martinez was struck with inspiration. He transformed a soft-serve ice cream machine into one that pumped out frosty margaritas.

The salt is there to bring out the sweet and sour flavors of the drink; even just a pinch will help subdue the bitterness and enhance the important flavors. On top of this, salt intensifies the drinker's perception of the drink's aromas, making the flavors even more powerful.

In fact, it was the most ordered mixed drink of 2008, according to the Cheers On-Premise Handbook. That year, Americans were consuming 185,000 margaritas per hour on average.

In 2013, 230 FIFTH Rooftop Bar & Penthouse Lounge in Manhattan baited partiers with a frozen margarita that used some incredibly high-end ingredients — the tequila alone cost $1800 a bottle. Even the ice was made from $450 bottles of Lois Roederer Cristal Champagne. The final product was poured into a Ralph Lauren hand-blown Hungarian crystal glass that can be taken home afterward. The decadent drink was for a good cause though — half the money was donated to a charity of the drinker's choice.

Tequila must be produced only in Mexico in the region of Tequila and has to conform to the strict rules of the Mexican government.

Tequila is produced in two general categories and four different types: The two categories are defined by the percentage of juice coming from the blue agave :

• Tequila 100% agave — It needs to be made from 100 percent blue agave and bottled in the Mexican distillery. It could be "Blanco, Reposado or Anejo".

• Tequila — It has to be made from at least 51 percent blue agave juice. It could be bulk exported and bottled in other countries that follow the Norma Oficial Mexicana (Official Mexican Standard). It could be Blanco, Reposado or Anejo.

Cool down this summer with these great cocktails

Summer is nearly here, and with it the long-awaited return of get togethers with family and friends. To celebrate, we gathered all of our favo…