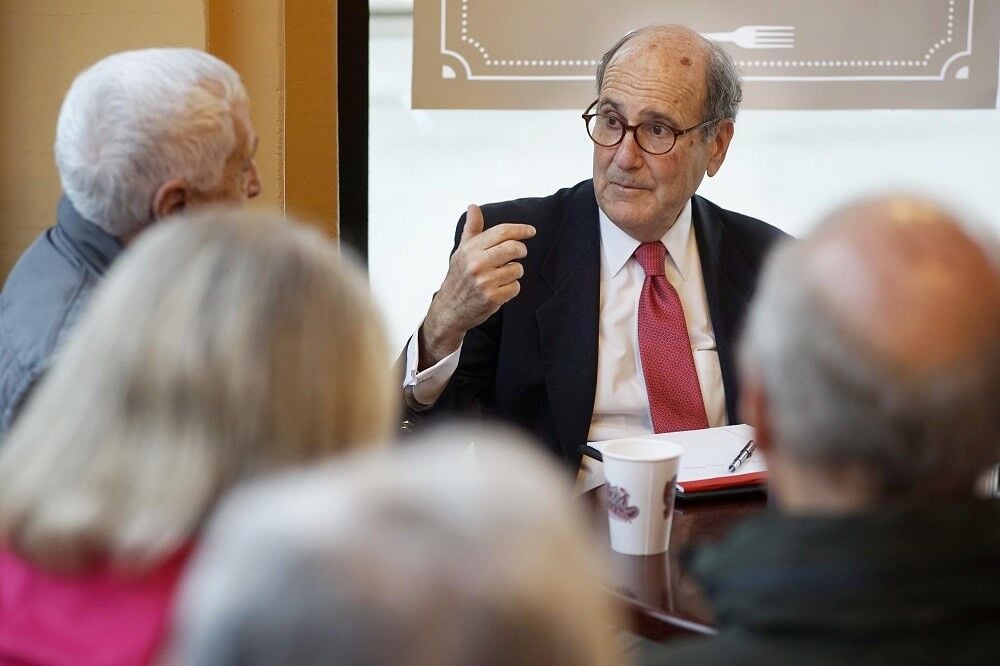 New England Newspapers President Fredric D. Rutberg enjoys coffee and conversation about the newspaper with readers earlier this year. Rutberg is also taking the helm as publisher of the company that publishes The Berkshire Eagle, Bennington (Vt.) Banner, Brattleboro (Vt.) Reformer and Manchester (Vt.) Journal. Alan English is leaving the publisher’s post to become vice president of communications for the Military Officers Association of America in Washington, D.C. 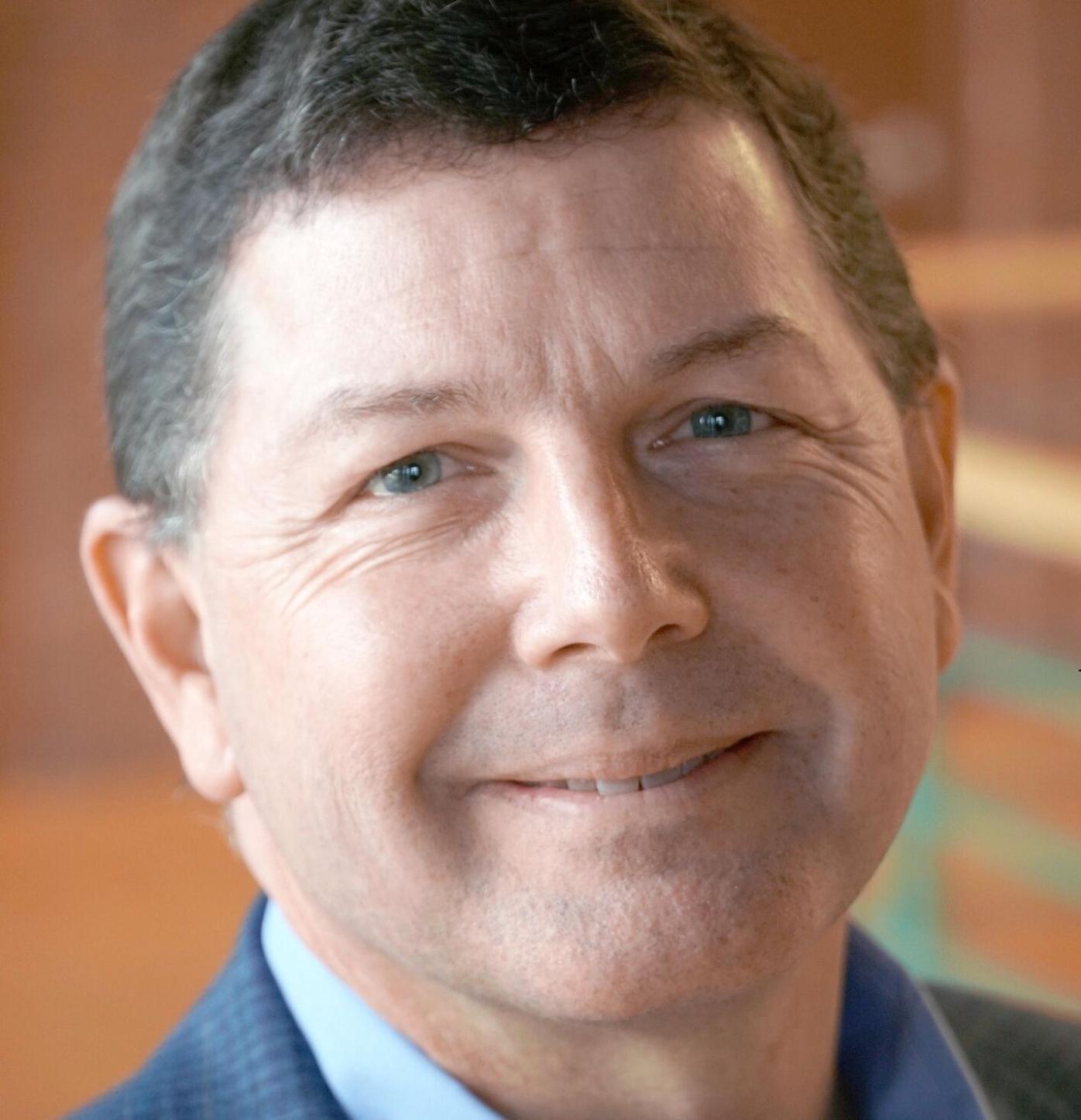 Alan English is leaving the publisher’s post at New England Newspapers Inc. to become vice president of communications for the Military Officers Association of America in Washington, D.C.

New England Newspapers President Fredric D. Rutberg enjoys coffee and conversation about the newspaper with readers earlier this year. Rutberg is also taking the helm as publisher of the company that publishes The Berkshire Eagle, Bennington (Vt.) Banner, Brattleboro (Vt.) Reformer and Manchester (Vt.) Journal. Alan English is leaving the publisher’s post to become vice president of communications for the Military Officers Association of America in Washington, D.C.

Alan English is leaving the publisher’s post at New England Newspapers Inc. to become vice president of communications for the Military Officers Association of America in Washington, D.C.

PITTSFIELD, Mass. — Alan English is stepping down as publisher of New England Newspapers Inc. to pursue public service in a new sector as head of communications for the Military Officers Association of America.

“It has been an honor to serve and work with this team on its noble mission” at New England Newspapers, English said.

English’s career change ends 30 years in journalism. Since November 2016, when he joined New England Newspapers as publisher, English quickly earned respect throughout the company, not only for his business acumen and innovative ideas from new events to mobile applications, but also his passion to accomplish the local news mission. He often invoked the First Amendment, the value of a free press and the public’s right to know. Such talk earned him respect within the newsroom, arguably the toughest bunch to impress at a newspaper company.

“Alan is leaving a stronger organization than he found,” said Rutberg. “My partners and I are disappointed that Alan decided to change careers. However, we are proud that he has decided to serve his country, and we completely respect his decision.”

Rutberg, the company’s president and a co-owner, also will now don the mantle of publisher, a role that oversees the various departments — from advertising to news to production to delivery — at a newspaper.

“I am both thrilled and awed at the opportunity that has been given to me by Alan’s unexpected career change,” Rutberg said.

Rutberg, a retired district court judge from Stockbridge, hatched the plan some three years ago that put New England Newspapers Inc. under local ownership — for the first time in 21 years — in May 2016. Rutberg’s ownership partners include Robert G. Wilmers, Hans Morris and Judith Lipsey.

Rutberg’s diligent work of the past three years has prepared him to take the reins now as publisher, he said.

“I believe I am ready and qualified to step in now,” he said.

“Eighteen months ago, Bob Wilmers announced our goal to the world: We would make The Berkshire Eagle the finest community newspaper in America and New England Newspapers the finest group of community newspapers in America,” Rutberg said. “We also announced our somewhat radical business plan: Improve the quality and quantity of the content we publish, which would increase the readership, which, in turn, would increase the advertising revenues that will ensure our sustainability.

“Because of that stunning work that everyone in this company — from the inserters to the editors — has done, we can honestly say that the quality of our publications has increased and increased significantly. But this is just the beginning and with your continued help and enthusiasm, we will all see this organization and its publications continue to soar. I look forward to being at the helm during this next phase.”

The new ownership group has reinvested in the company and added about 55 new jobs to the operations, including in the news department that had been wracked by previous corporate ownership. Since the purchase, New England Newspapers publications have won numerous journalism awards from industry associations.

English, 52, called it “bittersweet to leave,” but said his new job as vice president of communications at the Military Officers Association of America in Washington, D.C., is a “terrific opportunity to do what I love and to serve the country in a new way.” The association represents and advocates for 350,000 officers in the Armed Forces and the commissioned corps of the Public Health Service and National Oceanic and Atmospheric Administration.

In his role, English will be involved in advocacy, media operations, and services and initiatives helping active-duty and retired military officers and their families. The job also includes serving as publisher and editor-in-chief of Military Officer magazine.

“And I think great teams have energetic leaders. He’s also probably one of the best mentors I’ve run across in my career,” Atkins said.

English came to New England Newspapers from The Shreveport Times in Louisiana where he was president and publisher. English also has held executive positions at newspapers in Arkansas, Georgia, New York, New Jersey, North Carolina and Tennessee. He and his wife have two children.

“In the last year here, we’ve accomplished much to improve the quality of the journalism and to advance the business of doing public service,” English said.

“Fred Rutberg is an inspiration, and I love our partnership and teamwork,” English continued. “I consider our work together one of the top moments in my journalism career.”

Rutberg, 72, lives in Stockbridge with his wife, Judith Monachina. Rutberg retired in 2015 after 21 years on the Berkshire District Court bench.

A Philadelphia native, Rutberg graduated from the University of Michigan and New York University School of Law. He began his law career with the New York Human Rights Commission, and established his Berkshire County law practice in 1974.

He is a former trustee of the Berkshire Theater Group.