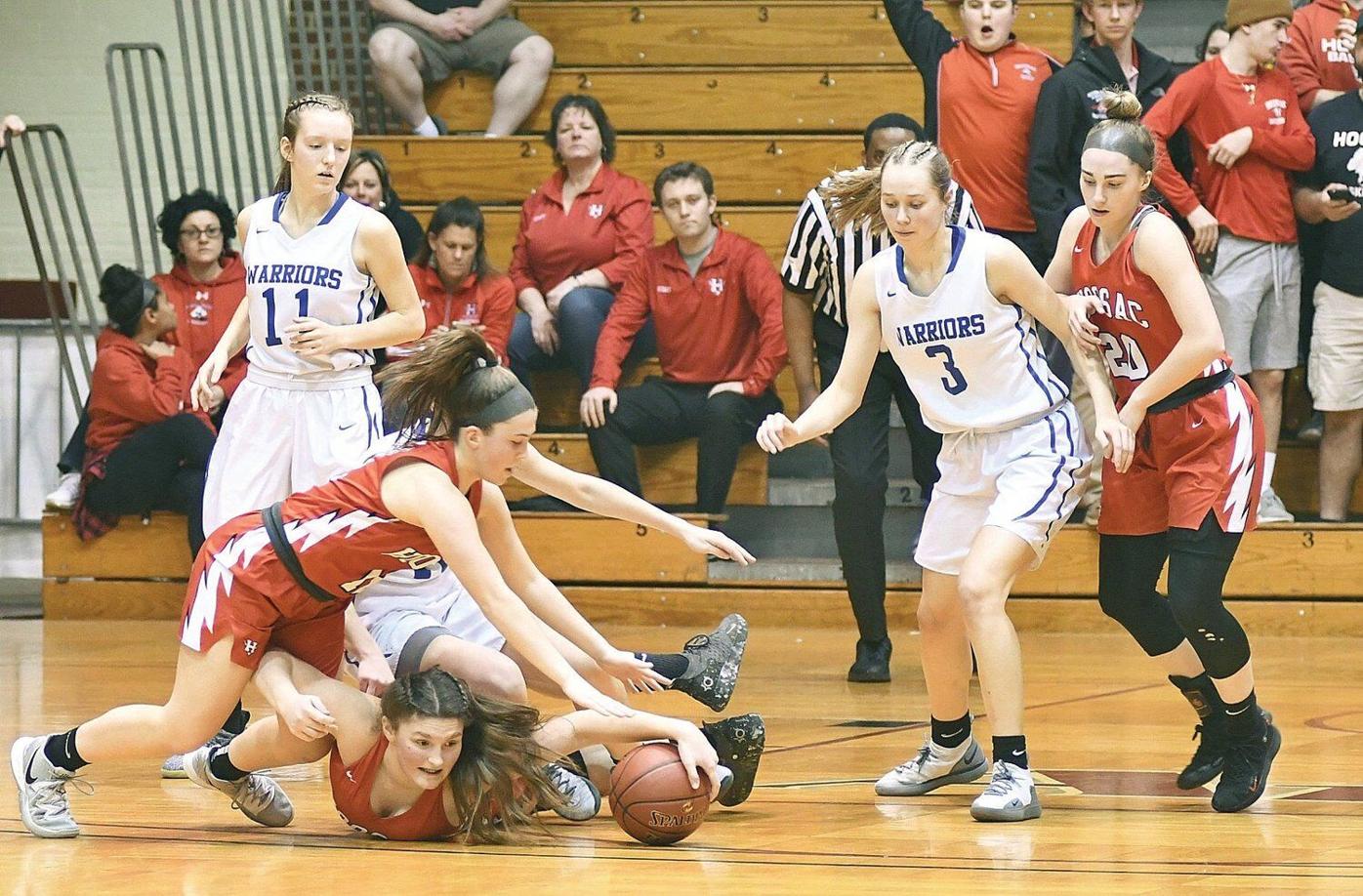 Hoosac Valley's Shaleigh Levesque and Gabby Billetz dive for a loose ball, while Riley Robinson looks on during the Western Massachusetts Division III championship game earlier this month. The Hurricanes went on to repeat as state champs. 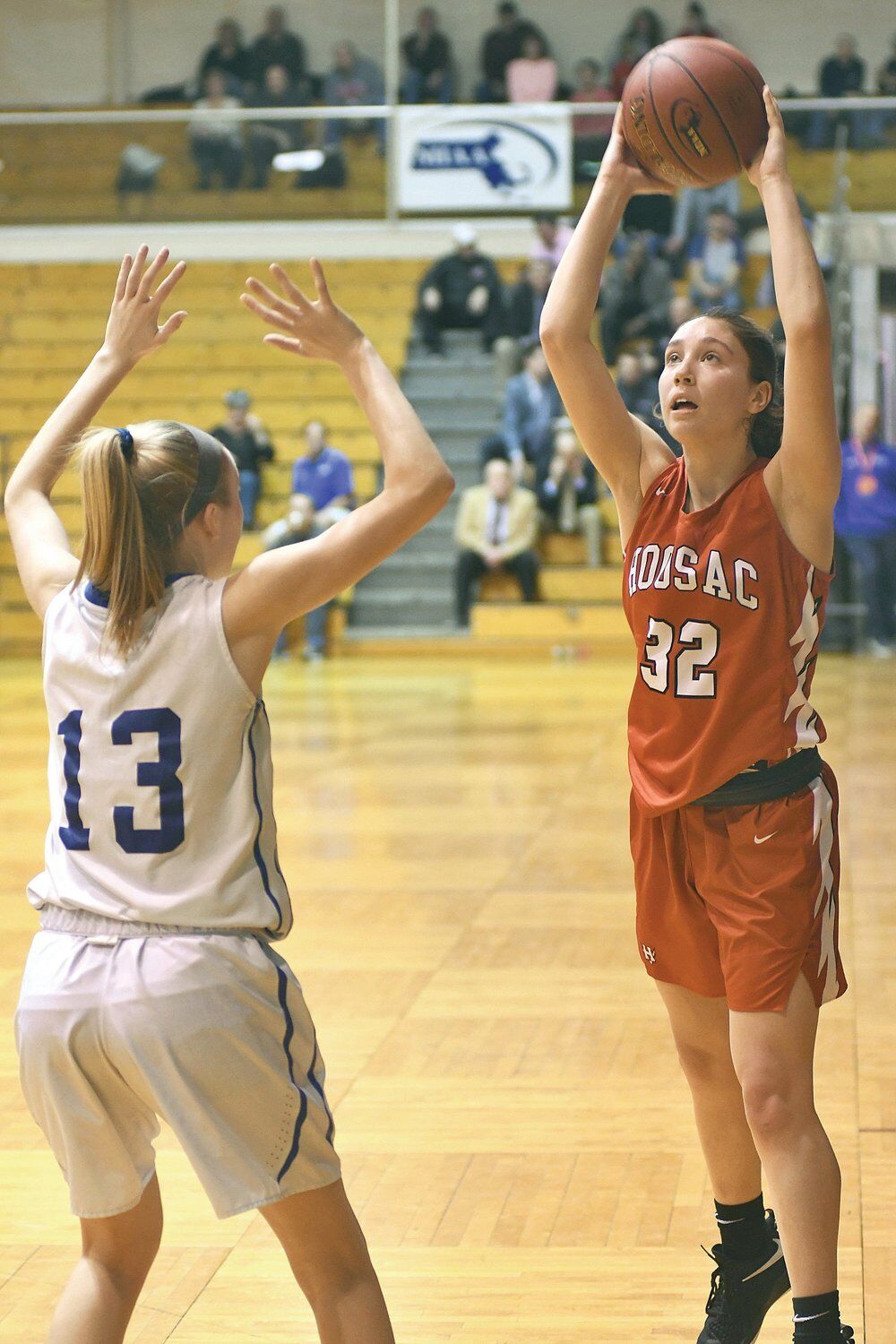 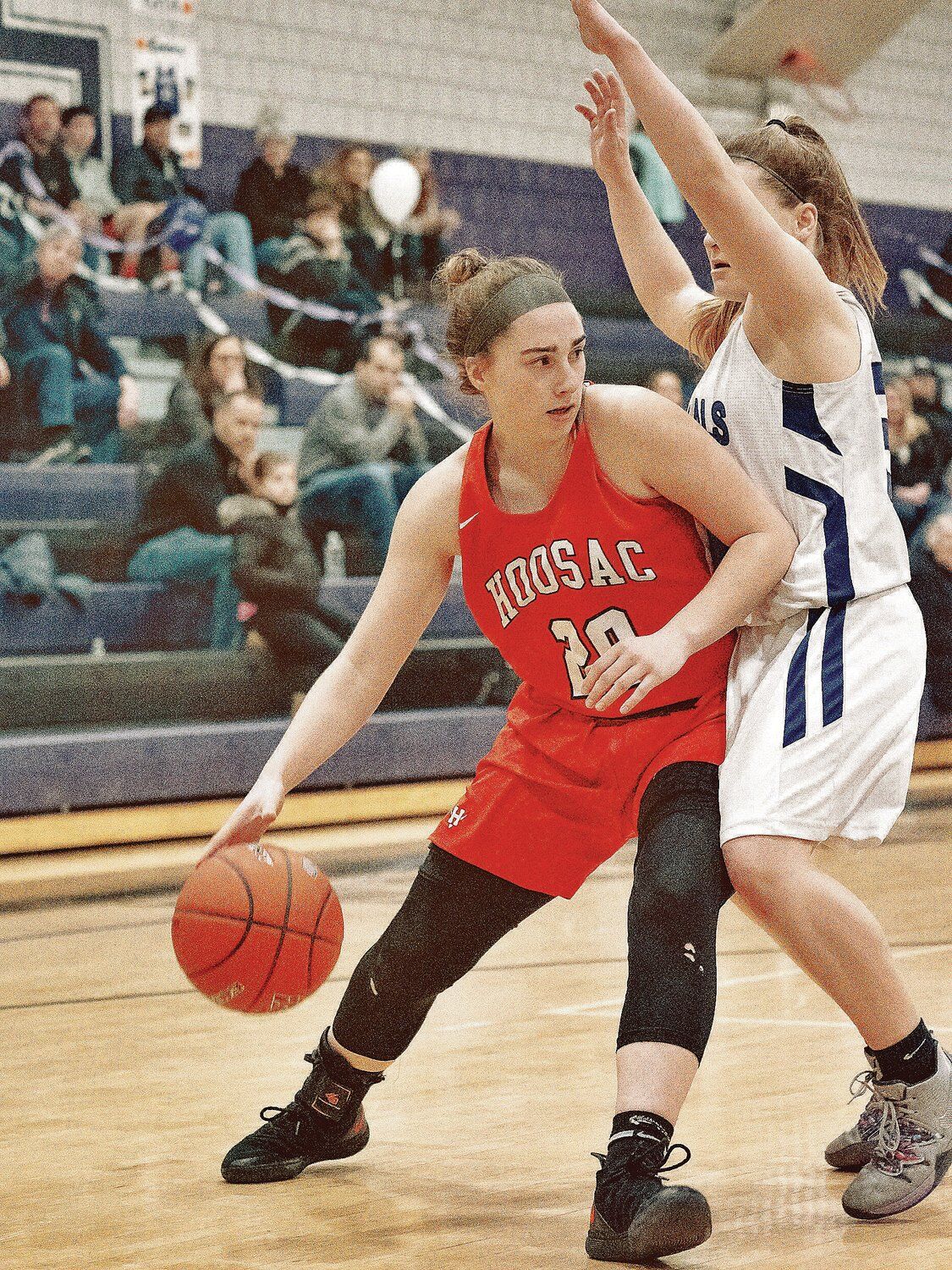 Senior Riley Robinson averaged 11 points per game through the playoffs to lead Hoosac Valley to a state championship.

Hoosac Valley's Shaleigh Levesque and Gabby Billetz dive for a loose ball, while Riley Robinson looks on during the Western Massachusetts Division III championship game earlier this month. The Hurricanes went on to repeat as state champs.

Senior Riley Robinson averaged 11 points per game through the playoffs to lead Hoosac Valley to a state championship.

CHESHIRE — There are countless high school clubs that welcome students in with open arms. Some clubs, though, are much more exclusive.

For instance, the 1,000-point scorers club for basketball players remains one of the toughest for athletes to enter, but that didn't stop two classmates from Hoosac Valley. Alie Mendel and Lexi Mercier each cracked 1,000 points and helped the Hurricanes win their first state championship, before graduating in 2019. The run not only secured coach Ron Wojcik's first state title, but showcased the effort needed to earn the elusive crown.

Each year, every team looks different. For Hoosac Valley, roughly 2,500 career points graduated with Mercier (432 as a senior) and Mendel (435), which was an extraordinary blow.

"We still came together, made the shots we needed to and figured out how to do things differently offensively," said Sarah Field, Berkshire County's leading 3-point shooter following a practice earlier this month.

"I think we have a number of good offensive players, three players averaging roughly nine points a game," coach Wojcik added, "But when you take two players and 2,500 points away, that is a lot."

Only 13 Berkshire County girls basketball players have notched at least 1,000 points since 2010. The Hoosac Valley Hurricanes needed the talent of Mercier and Mendel to capture a state title, but the 2019-20 edition of the team didn't have generational scorers and still managed to top No. 1 Wahconah in the Western Massachusetts Division III championship, before outscoring Millbury 23-13 in the second half of the MIAA state semifinals, earning the title of co-state champions.

Those scorers mentioned by Wojcik are Field (8.8 points per game), fellow senior Riley Robinson (9) and sophomore Averie McGrath (8.8). None of those numbers jump out on paper, but come playoff time, that mattered little.

Early in the season, it looked like the Hurricanes might still be an offensive juggernaut with two 70-point wins. McGrath notched 20 points against Lee and Robinson dropped 17 points on Greenfield, but Hoosac Valley was 2-2 by Dec. 21.

It was far too early to be pressing the panic button in Cheshire, but the Hurricanes knew they weren't going to be competing for a championship on the shoulders of their offensive ability. Instead, it started on the opposite end of the court, with Robinson at the center of the defense.

When the senior first entered the halls at 125 Savoy Road as a freshman, she made herself a promise.

"I didn't want to have any regrets when I leave," Robinson said. "Even after a loss, I wanted to know that I really gave it my all and I think that is a big part of my motivation."

That attitude didn't stop with Robinson, who made a habit of running two sprints for every missed layup at practice.

Despite the 2-2 start, Hoosac Valley finished the regular season with a record of 14-6. According to coach Wojcik, the girls turned the page against Minnechaug on Jan. 25.

The battle against the eventual Western Mass. D-I champion Falcons, a 62-47 victory, was followed by two games in which the Hurricanes allowed a combined 35 points.

"Our defense started getting better every game," Wojcik explained.

The Hurricanes held opponents to 35 points or less in 10 of 24 contests throughout the season.

"They've bought in to defending, especially in the half court, with pressure and its gone great," coach Wojcik said. "When you see that [nobody averaged double figures], you really have to focus defensively."

The defense started at the tip-off with 5-foot-3 'center' Shaleigh Levesque hounding the opponent's ball handler on the opening possession.

Hoosac Valley showcased a zone defense with Robinson, McGrath and Field forcing shooters inside, where the Hurricanes had a secret weapon.

Two players, or even five players don't win a championship. It takes an entire team, and after McGrath came up big in the 2019 state championship, the 2019-20 season saw freshman Gabby Billetz stroll onto the big stage.

"We didn't have to say much to Gabby," coach Wojcik said. "You don't have to when you see a freshman who is that aggressive and loves the banging in the paint."

Billetz jumped into playing time by embodying the grit and grind attitude that powered Hoosac to six state tournaments in seven years.

"I like to go in thinking I am going to kill it and get all the rebounds," Billetz said. "It doesn't matter what happens, I need to get that ball.

"I ask a lot of questions, and I feel like that has helped me. Riley and Shaleigh, they always have tips that are helpful."

Billetz started rolling offensively on Jan. 20 with an 11-point performance against Pittsfield. Three days later, against rival Wahconah, she scored another 11 points and averaged seven a game from then on.

A strong January clinched their playoff berth, but the girls in Cheshire closed on a 3-3 stretch before securing the third seed in the Western Mass. tournament.

There was no doubt Hoosac would make the dance, but could the Hurricanes keep winning?

"I love the people who doubted us," Field said. "We were the underdog as the three seed."

The Hurricanes met No. 6 Granby in the quarterfinals, and trailed 27-23 at the half. Apparently that was right where Hoosac Valley, and Field specifically, wanted to be.

Field thrives in those tight spaces, specifically the one in the corner of the court right behind the 3-point line.

Seven 3-pointers fell for Field in the contest, with three of them coming in the fourth quarter. She finished with a game-high, and career-high, 25 points.

The Hurricanes next set their sights on a matchup with No. 2 Hampshire.

Billetz was held scoreless for three quarters, but her nine points in the final eight minutes, along with Robinson's 17 overall, helped Hoosac hold off the Red Raiders, 53-48.

Robinson, who also had 14 points against Granby, averaged 11 per game throughout the playoffs.

"When you get [into the playoffs] it is all about hard work," Robinson said. "We don't view ourselves as a team, it's cliche I know, but we are all sisters. I trust each and every one of my teammates to have my back and I know I'll always have theirs."

The defending state champs pulled off their first win as 'underdogs,' but were looking at a battle against a buzzsaw in the Western Mass. final.

Wahconah seemed unstoppable in the playoffs, with two wins by a combined 77 points, but Hoosac Valley had the Warriors' number throughout the season. Wahconah finished the year 18-5, three of those losses came to the Hurricanes, including a 43-30 decision in the D-III championship.

With the Warriors running through opponents and the Hurricanes fighting tooth-and-nail for victories, the top-seeded Warriors seemed to be the favorite.

The thing about sports, though, is that they're unpredictable. No one, not even the Hurricanes, could see the game unfolding as it did.

Hoosac not only held Wahconah scoreless in the first quarter, but to just three points in the game's first 22 minutes.

Robinson would likely call this cliche, too, but offenses don't win championships, defenses do.

The Hurricanes hoisted their seventh sectional trophy in eight years, not on the shoulders of generational scorers, but as a team that simply kept winning.

Coach Wojcik always mentions how his players won't necessarily remember how many points they scored or specific plays, but they'll remember the time they spent together.

This team lost two great scorers, used different bumps in the road as jumping-off points, helped each other make sure their hair was in the perfect bun, and most importantly — outworked every team they faced.

However, there was still one hurdle the Hurricanes needed to jump in order to return to the mountain top.

"A long time ago, I saw somewhere to make the girls count [free throws] and it makes them focus better," Wojcik said.

At the start of every season coach Wojcik hangs a poster on the doors of the gym where each player records how many free throws they make in each practice.

The Hurricanes struggled offensively into the fourth quarter of the state semifinals against Millbury.

Robinson had scored all four of her team's fourth-quarter points until the 3-minute, 12-second mark. Those two buckets were the only two the Hurricanes made in the quarter, but as a team, they connected on 7 of 9 free throws in the frame, and 19 of 23 on the night. In a 42-38 win, that made all the difference.

How can a team lose 867 points and repeat as state champions?

The Hurricanes answered that question.

"Being the underdog isn't the worst thing," Field joked. "We beat the second and first seeds and then proved everyone wrong in the state tournament."

"I think it is good to come in as an underdog," Levesque said following the Millbury win. "Once you're in the tournament, it doesn't matter. Each game could be your last."

Ironically, because of the coronavirus pandemic, that was Levesque and her fellow seniors' last game.

This edition of Hoosac Valley was doubted from the start and wanted to show the state that is could, and would find a way to win.

"It was pretty surreal [when the championship game was cancelled]," coach Wojcik said on March 12. "You're practicing with the mindset that you're going to play and then the seniors figured out [the state semifinal] was their last game."

Hoosac Valley had to 'settle' for being co-state champions, its second title in two years.

"We always say we'll prove everyone wrong," Field said. "We aren't who they say we are, we're much better."

Now, in order to complete the story, there is one more cliche that needs to be acknowledged.

Last year the Hurricanes lost two of the best scorers in school history. This year, the team bids farewell to Field, a tenacious defender and the best spot-up shooter Berkshire County had to offer; Levesque, a dynamic defender who thrived in the fast break, and Robinson, who's passing ability and basketball IQ remain unmatched.

If you don't learn from history, you're doomed to repeat it. Hoosac Valley is losing cornerstones of the program, yet again, but that doesn't mean that it is vulnerable.

Annie Canales came up with much-needed buckets in the wins over Millbury and Wahconah. Alyssa Garabedian continued to get more involved as a ball handler and Abby Hugger is a physical presence in the paint.

For the two returning starters, the sky is the limit. McGrath is on pace to become one of the county's most versatile scorers. Billetz, as well, will be working  to improve her game throughout the offseason.

With the 2019-20 season in the books, the best description of the Hurricanes was often whispered in their pregame huddles.

"We're a bunch of hard workers who are always going to give you our best shot," Robinson said. "No matter how tiny the program is, you can never doubt us."