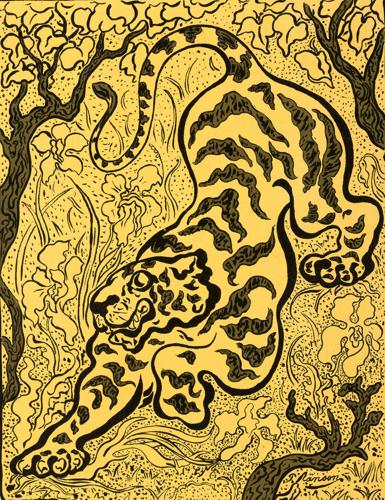 Paul Elie Ranson's "Tiger in the Jungle," on loan from the Williams College Museum of Art. 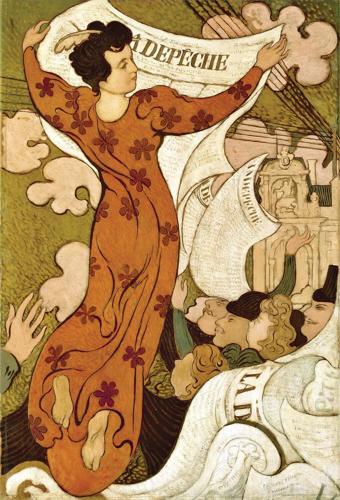 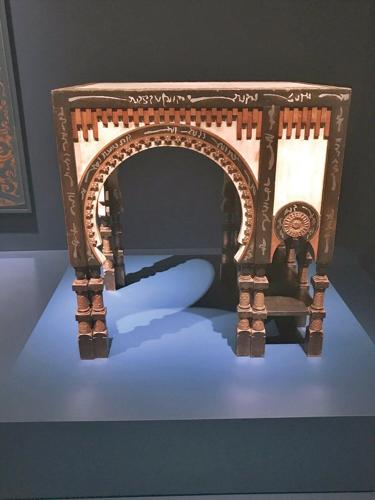 Carlo Bugatti's "Table" is on loan from The Art Institute of Chicago. 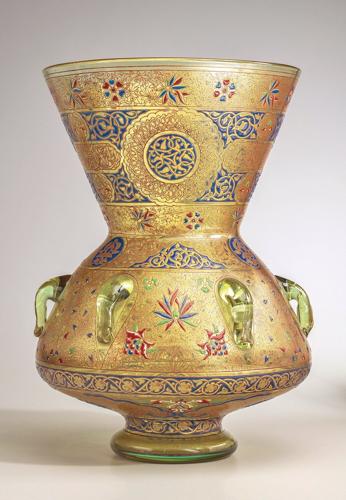 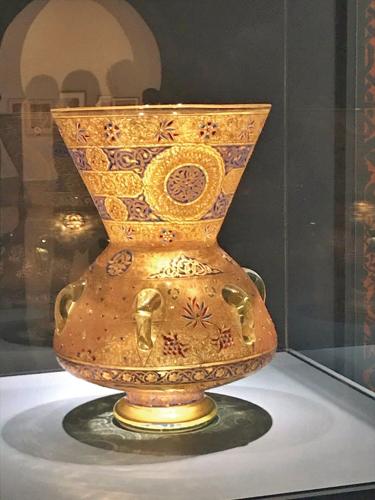 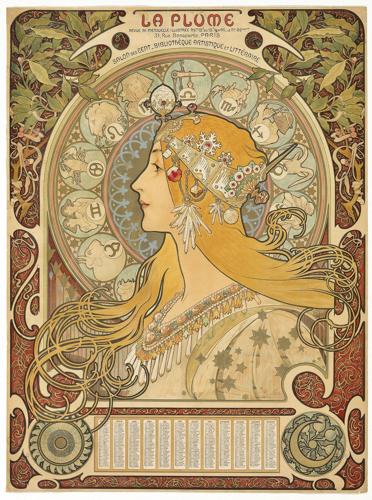 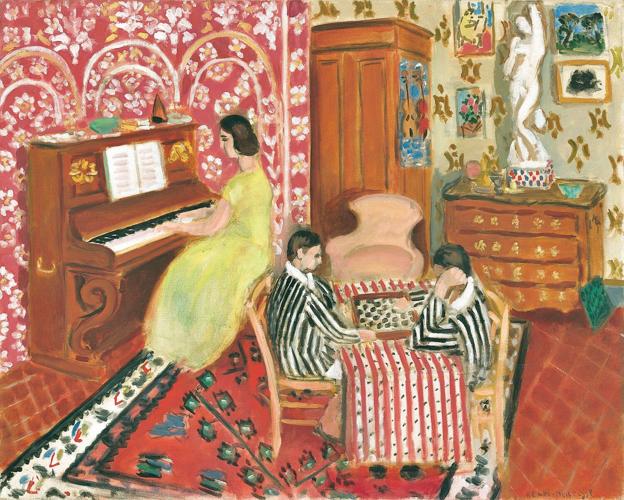 Henri Matisse's "Pianist and Checker Players" is on loan from the National Gallery of Art. 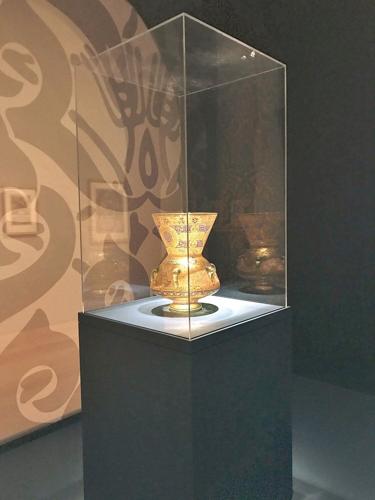 Philippe-Joseph Brocard's "Mosque Lamp" on display as part of "Arabesque" at The Clark.

Paul Elie Ranson's "Tiger in the Jungle," on loan from the Williams College Museum of Art.

Carlo Bugatti's "Table" is on loan from The Art Institute of Chicago.

Henri Matisse's "Pianist and Checker Players" is on loan from the National Gallery of Art.

Philippe-Joseph Brocard's "Mosque Lamp" on display as part of "Arabesque" at The Clark.

WILLIAMSTOWN — Arabesque — the swirling, free-flowing, calligraphic line without beginning or end — came into its own as an ornamental design motif in the 1800s after centuries of being confined in the borders of architecture and art.

No longer consigned to ancillary framing devices by European artists, the arabesque line surged and evolved.

That transitional moment, when the sinuous line moved from the peripheral and spilled over into the central compositions of European artists, is the focus of The Clark Art Institute's latest exhibition, "Arabesque."

"Arabesque is not only a cross-cultural motif, but a cross-artistic motif. It brings together different art forms, all of which have forms of arabesque in them," said Anne Leonard, the museum's Manton curator of prints, drawings and photographs. "Some of these different art forms [dance, music, literature and visual art] will manifest themselves in the different works here on display."

Comprised of 45 works of art from The Clark's collection and on loan from other institutions, the show examines the transformative journey of the arabesque, beginning with the Rococo period and German Romantic artists such as Philipp Otto Runge, Peter von Cornelius and Eugen Napoleon Neureuther.

In Runge's 1807 series, "The Times of Day, " some of the earliest twinges of compositional change can be seen, as arabesque details seep over defined frames and branches sway into the center of the etchings from the sides.

But it is Neureuther's "Little Briar Rose (Sleeping Beauty)," that elevated the design motif to new stature in the early 19th century, when foliage and vines on the edges and in the corners burst through the frame, twisting and creeping their way into the heart of the etching, intermingling with the text and establishing itself as more than a border motif.

As Eastern lands opened to Europeans, so too grew the awareness of historical influences and artistic roots.

"There's a kind of history already in Germany, of this kind of ornament but not so much of an awareness of the sources in Middle Eastern lands," Leonard said. "That changes in the 1830s when there's a great interest in recovering some of the historical sources of arabesque, going to the source and understanding better the use of these motifs of ornament in monuments like the Alhambra [Palace]."

The historical roots of arabesque, both Islamic and pre-Islamic, were explored in depth by British architect and writer Owen Jones, who produced two illustrated compendiums, "Alhambra" and "the Grammar of Ornament," during two trips to the Alhambra Palace in Spain in 1834 and 1837. The books included large illustrated color panels, several of which are on display in the show.

"When these books are published and circulate around Europe, it creates a very strong interest in objects that are inspired by these patterns to be used as interior decorations and other decorative objects in European interiors," Leonard said.

But instead of using Owen's books to promote accuracy and historical understanding, many used the books more like fabric swatches as they adapted the motifs for furniture and rugs. The style, known as "Orientalizing," included the adaption and copying of mosque lamps and rugs, as well in the copying of decorative enameling and gilding.

With a tableau, the curator has tried to recreate such an interior, using "Mosque Lamp," by Philippe-Joseph Brocard, from The Clark's collection, "Length of Furnishing Fabric, 'Alhambra,'" on loan from the Museum of Fine Arts, Boston, and a mosque-style "Table" created by Italian artist Carlo Bugatti, on loan from the Art Institute of Chicago.

"These are imitations that incorporate strong architectural elements, that incorporate Arab script; that are strongly imitative, but in effect, domesticated and used in European homes," she said.

But it was near the end of the 19th century, during the Art Noveau period that arabesque fully blossomed as a principal design component.

Here, the arabesque line can be found in the curved female figure holding a newspaper in Maurice Denis' "La Depeche de Toulouse;" in the wavy black and yellow lines of Paul Elie Ranson's "Tiger in the Jungle;" and in the line-bending masterpieces, "Jane Avril" and "Divan Japonais," of Henri de Toulouse-Lautrec.

And, in its most flattering portrayal, it is seen in artist Alphonse Mucha's illustrations of "beautifully generic women," known as the Mucha Women, that graced many advertisements. Included in the show are, "Zodique (La Plume)," "Biscuits Lefevre-Utile," and "JOB," where the arabesque motif manifests itself in swirling curl and plumes of smoke.

The highlight of the show comes at the end, where visitors are treated to Henri Matisse's "Pianist and Checker Players," where arabesque lines blend seamlessly with other art forms and styles.

"It sums up a lot of themes of the exhibition in one. It lies outside the chronological range; it's from 1924. In a way, it's a look back, but we frame it in this context to gather together the many strands of arabesque," Leonard said.