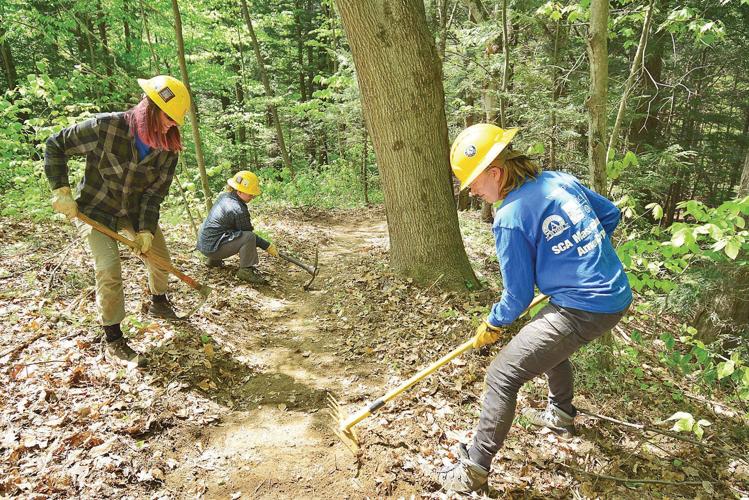 Members of the Student Conservation Association - from left, Grace Sullivan, Lilly Haley and Hanna Brooks - work on cutting a new trail to Peck's Falls on Thursday at Greylock Glen in Adams. Work is continuting as part of the state Department of Conservation and Recreation's ongoing effort to enhance sections of the 12,500-acre reservation. 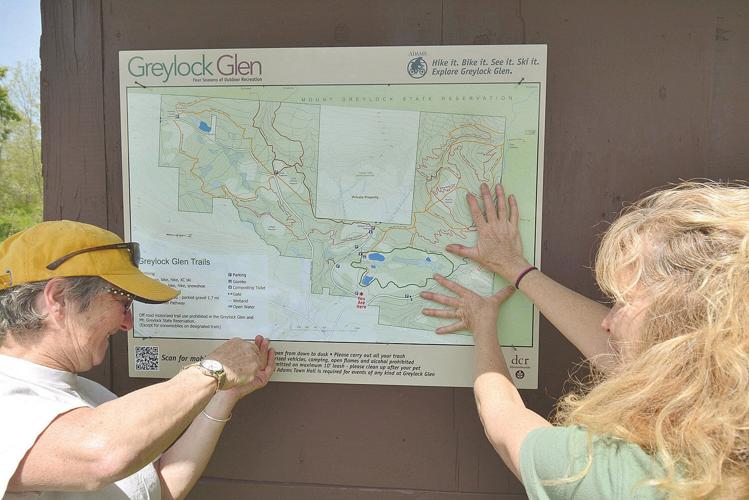 Volunteer Heather Linscott, left, and Becky Barnes, of the Massachusetts Department of Conservation and Recreation, put up a trail map Thursday at one of the kiosks at Greylock Glen in Adams. 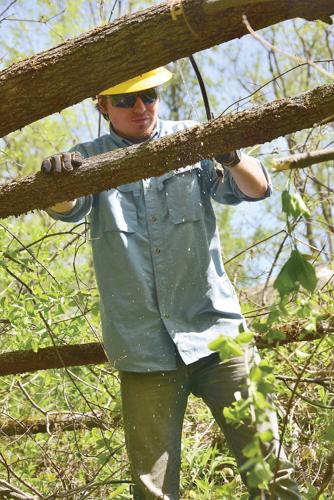 Davis Toler of the Student Conservation Association works on sawing a tree as he and a crew cut a new trail to Peck's Falls on Thursday at Greylock Glen in Adams.

Members of the Student Conservation Association - from left, Grace Sullivan, Lilly Haley and Hanna Brooks - work on cutting a new trail to Peck's Falls on Thursday at Greylock Glen in Adams. Work is continuting as part of the state Department of Conservation and Recreation's ongoing effort to enhance sections of the 12,500-acre reservation.

Volunteer Heather Linscott, left, and Becky Barnes, of the Massachusetts Department of Conservation and Recreation, put up a trail map Thursday at one of the kiosks at Greylock Glen in Adams.

Davis Toler of the Student Conservation Association works on sawing a tree as he and a crew cut a new trail to Peck's Falls on Thursday at Greylock Glen in Adams.

Each is an open invitation to hikers and bikers, the fruit of a roughly $3 million investment over the past several years by the state Department of Conservation and Recreation and two local partners — the town of Adams and the Thunderbolt Ski Runners.

On Thursday, Heather Linscott, a lifelong resident of the Glen area, joined with Becky Barnes, who oversees operations at the Mount Greylock State Reservation, to spruce up two wooden kiosks and then mount new $120 laminated signs that show the breadth of trail options lacing through meadows and woods on the sprawling landscape west of downtown Adams.

After years lending her strength to trail-building, and traveling miles of mountain biking routes, Linscott didn't break a sweat drilling pilot holes and then muscling in screws to place new signs, including the requisite warning to visitors about ticks.

Even as the signs heralded completion of recent trail projects, work continued nearby as part of the DCR's ongoing effort to enhance sections of the 12,500-acre reservation. A five-member team from the Student Conservation Association, working with AmeriCorps and the state's own park service, worked to reroute the Peck's Falls Trail, part of a 10-day assignment to the Glen from their base in Hawley.

For Linscott and Barnes, the new signs cap four years of work to provide new recreation options at the Glen, from easy strolls on the firm gravel of the 1.7-mile Glen Meadow Loop to twisting climbs up narrow tracks astride bikes. In winter, backcountry skiers roam these miles, some on the famous Thunderbolt ski run.

"We're pretty close to building out that plan," Barnes said of the grand design for Glen trails.

Though development plans for the Glen often have failed, the town of Adams' new approach is to encourage wider recreational use, in part through creation of a 10,000-square-foot Outdoor Center being designed by Maclay Architects of Vermont. Funding for that project is not yet in hand.

Other elements include a four-season campground and, if a developer can be found, a hotel and conference center. In the current plan, 56 acres at the Glen would be developed, with 1,000 left undeveloped.

The new maps were created by Linscott and Barnes, with help from Mark Maloy, a staff member and mapmaker at the Berkshire Regional Planning Commission.

"It took all of us collaborating," Linscott said.

Computer codes tucked into a corner of the maps can be used to call up digital copies on smartphones. Barnes said people are also accustomed to taking pictures of maps on the phones to refer to while hiking.

The maps offer a break to Linscott, who has been a kind of living atlas to people she encounters in the Glen. Recently, she said, visitors stopped her, sized her up as a local and said: "OK, you're going to tell us which way we want to go."

A `hitch' at Glen

This week's newest trail at the Glen is a 225-foot switchback leading from Gould Road that replaces a short but steep descent toward Peck's Falls, located just one-tenth of a mile into the woods.

The new section of trail was created in less than two days by the SCA team, whose members plan to spend most of their 10-day assignment — they call it a "hitch" — working near the scenic falls.

"Easier on their knees," Barnes said of visitors who will find the new route waiting for them at the trailhead.

Hanna Brooks, 22, was serving Thursday as team leader for the crew, which had settled into a campsite at the Glen for its hitch.

The area's beauty had not gone unnoticed.

"I've always loved the outdoors, so that's why I joined the program," Brooks said. "It's gorgeous in here. We lucked out."

After having piled brush over the now-discontinued section of trail, Brooks and Grace Sullivan, a 23-year-old from Chicago, were considering ways to "naturalize" the defunct trail — in other words, making the limbs look more like windfall than a brush pile.

"To make it look like you haven't been here," Sullivan said.

"There is some art in our project work, for sure," Brooks said. "Making it look appealing."

Last week, the crew was at Nickerson State Park on Cape Cod, honing skills needed for trail work. Members are trained as sawyers, riggers and carpenters, each with specific duties.

"It's beautiful. I love it," Sam Spence, 21, of Lowell, said of his posting at the Glen. He is using a 10-month stint with the SCA as a kind of gap year from his studies at the University of Massachusetts-Lowell. When Spence wraps up work at summer's end, he'll have earned a $6,000 educational award to put toward tuition. Participants also receive small stipends and a food allowance.

"We're not making a lot of money, but we eat well," Spence said with a smile.

In coming days, the team will place boulders on a rise beside the falls as a safety feature, Brooks said. By the end of next week, joined by fellow crew member Lilly Haley, 20, of South Deerfield, it also will install stone steps along a path leading down to the rocks and pools below the falls. That's where crystal waters in Peck's Brook churned Thursday, raising cool forest scents.

Most all materials used for projects come from the sites themselves. The new stone steps will be harvested from somewhere nearby, possibly in the twisting gorge below the falls.

"It's easier than carrying it around, too," Spence said.

Davis Toler, 21, of Little Rock, Ark., one of the team's sawyers, was looking forward to the challenge of engineering the best placement of stones for the new steps. But first he was using a handsaw to remove a fallen limb that partly blocked the new section of trail, then helped Spence begin to dig out an old trail sign mounted on a metal pole.

Both men puzzled over the existing sign, at nearly the height of a basketball rim. Toler said the crew passed by several times on Gould Road in their white van, looking in vain for a sign.

"We weren't expecting a sign in the trees," Toler said.

Down in the dirt, the metal pole seemed to be held stubbornly in place by concrete.

Before the team heads out, it anticipates seeing how its new trail section, complete with water bars and outlets for rain runoff, stands up to erosion.

Crews from the program have been regulars at the Glen for two decades, Barnes said.

"They are terrific," she said. "They do so many good projects for us on the trails. They really do care about the work they are doing."