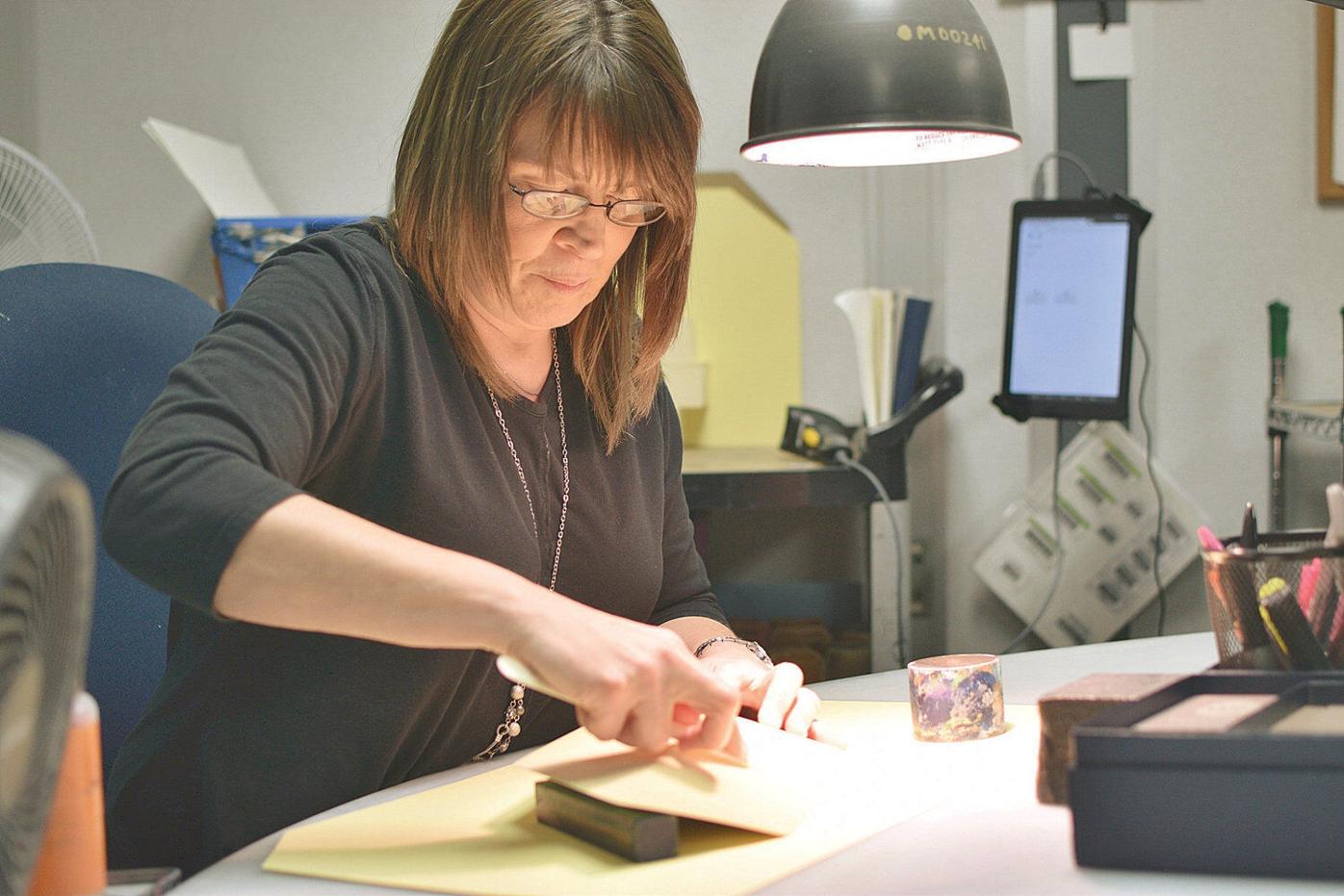 Sheri Siam delicately fans out a stack of stationery to which she will, by hand, apply an ink border. Siam demonstrated her methodology during a tour of Crane Stationery in North Adams taken by local officials Friday. 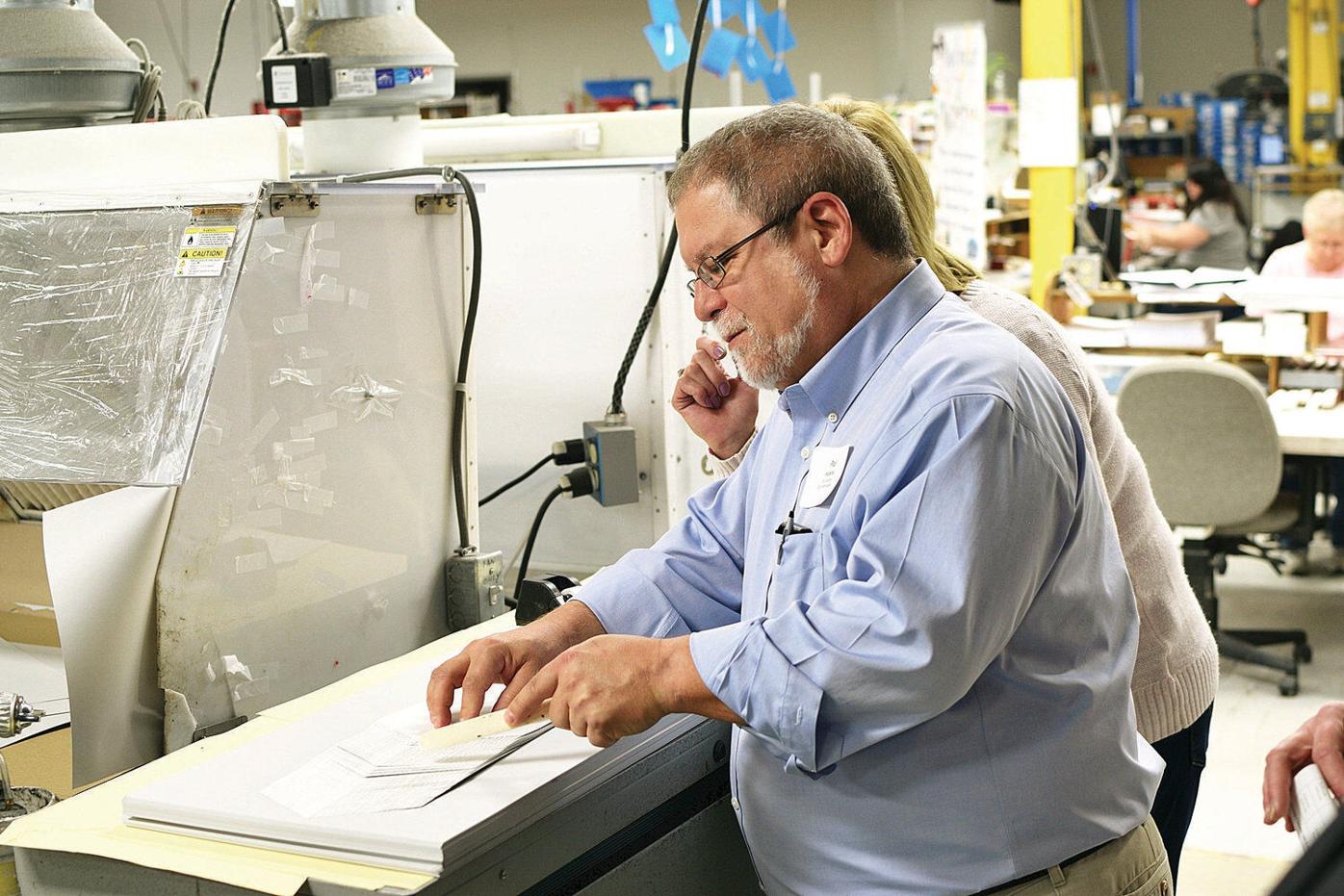 North Adams City Councilor Paul Hopkins on Friday attempts, with mixed results, to fan out a stack of envelopes at Crane Stationery that will be sprayed with an adhesive. 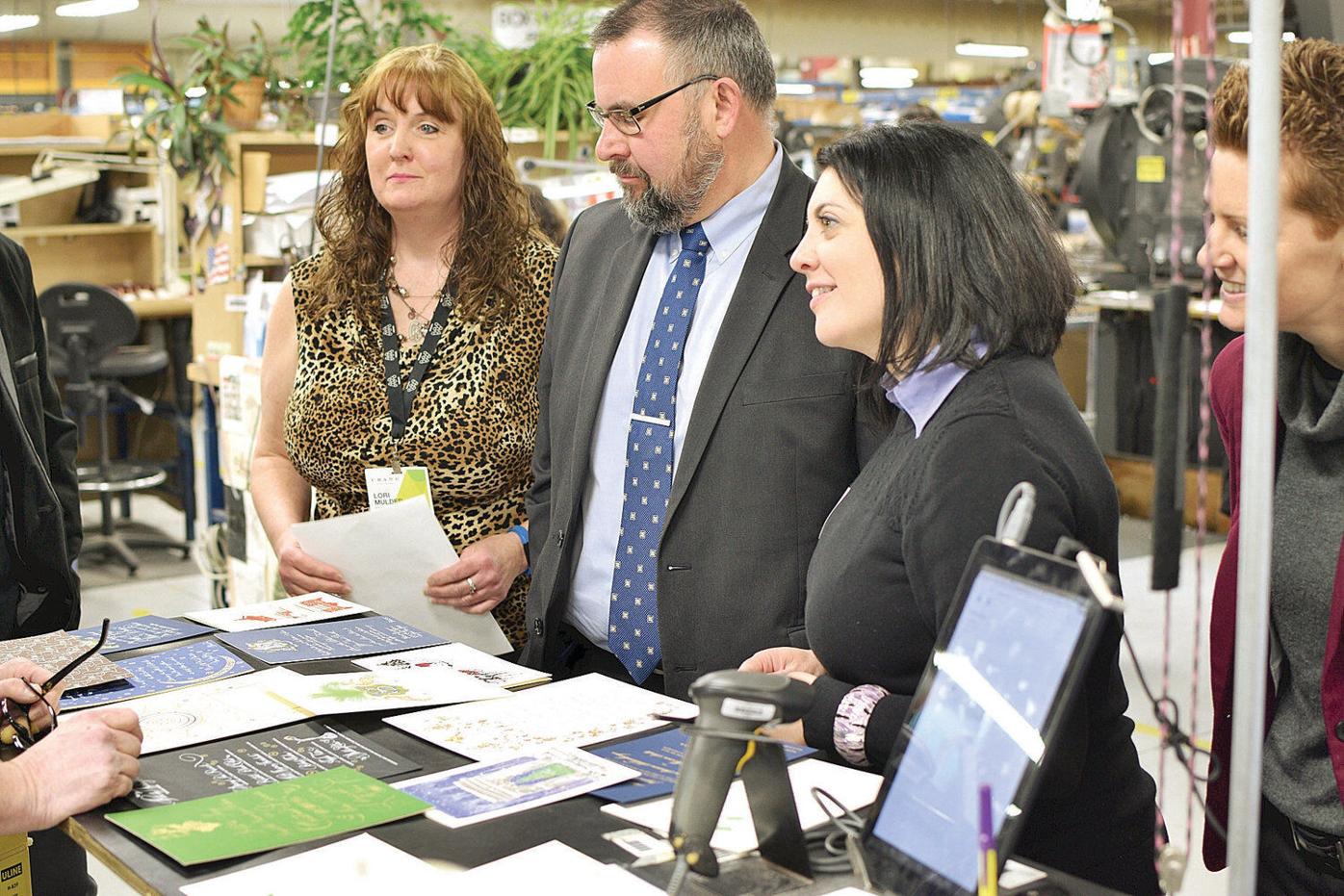 Sheri Siam delicately fans out a stack of stationery to which she will, by hand, apply an ink border. Siam demonstrated her methodology during a tour of Crane Stationery in North Adams taken by local officials Friday.

North Adams City Councilor Paul Hopkins on Friday attempts, with mixed results, to fan out a stack of envelopes at Crane Stationery that will be sprayed with an adhesive.

NORTH ADAMS — Crane has been in the paper business for more than 200 years, and the stationery company's new owners want to ensure it's around for at least 200 more.

"We really think there's a great opportunity to expand. We have a rich history, but we've been doing the same thing for a long, long time, and we've been put in a box," said Bart Robinson, chief revenue officer of Crane Stationery Co. "We need to be able to think outside of that box and design products that are for a larger audience."

Crane Stationery's new ownership Friday laid out a vision for growth, including millions of dollars of new investments and a doubling of its 270-employee local workforce.

"We will need to be hiring. ... There's no doubt in our minds that we can do that. It's going to take us time," Robinson said during a tour for local officials. "It's not going to happen this year or next year, but we need to start looking at talent that we can tap into as we move forward."

The event, organized by 1Berkshire, brought together Northern Berkshire leaders under Crane's roof at Hardman Industrial Park in North Adams, where they received a tour of the entire operation and a presentation from executives that laid out where the Crane brand is headed.

"I always believe that Crane was an innovation company," said Paul Thorogood, chief product officer. "In 1801, it was a disrupter ... why can't we go back to that? Why can't we shake off the chains that we've put around ourselves?"

Mohawk Fine Papers of Cohoes, N.Y., purchased Crane Stationery in April. In the year since, the paper manufacturing company has worked to chart a path forward.

Mohawk manufactures fine papers, envelopes and specialty materials for printing. It was founded in 1931 and remains a family-owned business, executives highlighted Friday.

Crane Stationery is one division of a brand that dates back more than 200 years. It split off from its Dalton-based parent company in 2015 while keeping the Crane name. It is well-known for its stationery products and has "unique capabilities" under a single roof, from new technology to letterpress equipment that dates back decades.

Crane works with about 1,400 retailers, including recognizable brands like Papyrus.

The ordering process remains labor-intensive, with only a small percentage placed online and ready to come directly to the floor.

"Orders still come in via the mail, faxed, typed out and then taken a picture of and emailed," Robinson noted.

"We're really having to redo all of the technology," Robinson said. "That's going to take us probably another 12 to 18 months."

Crane also wants to reach out to a broader customer base.

"If you look at our demographic, it is very much affluent, country club, New England, West Coast, and Texas," Robinson said.

Past management, Robinson argued, was "penny-wise but pound-foolish," a strategy that resulted in Crane falling behind its competitors.

"Their job was to get to a break-even [point], and sell it," Robinson said. "In doing that, they never discontinued anything, they never took any big chances — they were all very small bets."

So, in the year since the purchase by Mohawk, Crane has reduced its inventory by $1.5 million because, under Mohawk's ownership, it is able to buy paper in smaller quantities and become more efficient.

Crane is developing an in-house sales team, which did not exist before the Mohawk purchase. The company also will look to hire a number of other professionals, including engineers, designers and photographers.

That talent will come in handy as Crane takes on competitors like Shutterfly, Moo and Mint. To do so, it will look to increase its online sales and partner with other brands.

"We can act like a 200-year-old startup, and we can look at what all the other players in the digital market are doing, see what their problems are and leapfrog them," Thorogood said.

Crane will also look to make itself more appealing and will undergo an effort to reassess its own brand — including possibly reaching beyond stationery.

"We can do more," Thorogood said.

For local officials, who Friday included the superintendents of North Adams Public Schools and the Northern Berkshire Vocational Regional School District, as well as the president of Berkshire Community College, Crane's growth is to the region's benefit.

"Like you, I want to see the workforce needs that you have filled by people here," said North Adams Mayor Thomas Bernard. "And if can't do that, we're bringing people to North Adams, to the Northern Berkshires, to live, to work and be part of what you're trying to accomplish."

If anyone needed evidence that manufacturing and skilled labor can be a part of the Berkshires' economy moving forward, the floor at Crane Stationery provides it. On Friday morning, the hum of machines was persistent and employees shuttled through, completing tasks ranging from gilding to printing.

Sheri Siam demonstrated how she borders stationery by hand, fanning out a stack of paper at just the right angle before applying the first of several ink coats. Sure, it could be done by a printer, but some customers demand the perfect imperfection of a handmade border.

"The one thing that I will glowingly talk about all the time is the pride that the people in this facility take in the work that they do," Robinson said, noting that the average tenure of their employees is about 17 years.

For employees, new ownership means the return of a match for 401(k) contributions, company picnics and a holiday party.

"Those are the types of things we're bringing back," said Dean Daigle, chief operations officer.