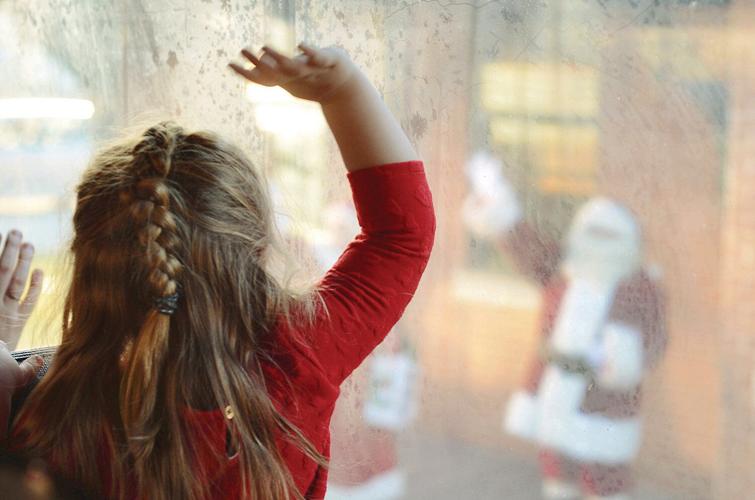 Madison Klipp, 3, of Northbridge, waves goodbye to Santa Claus after he got off the Tinseliner train in Adams. Madison joyfully squealed "Goodbye Santa! Merry Christmas!" 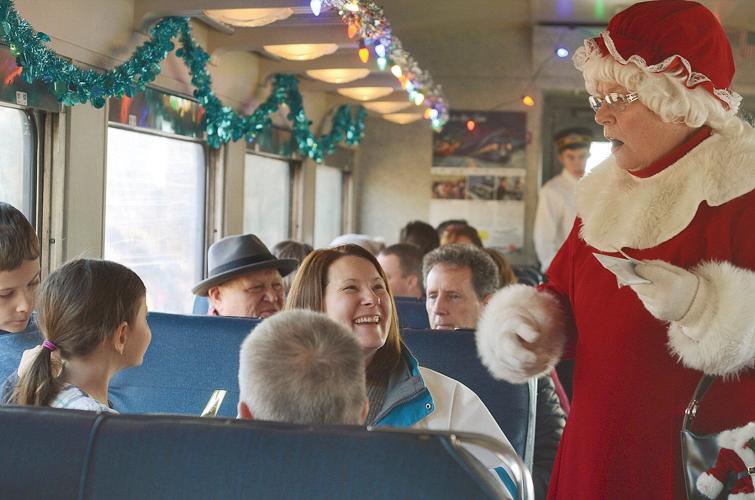 Mrs. Claus greets families before Santa boards the train, as they ride on the Tinseliner out of Adams. 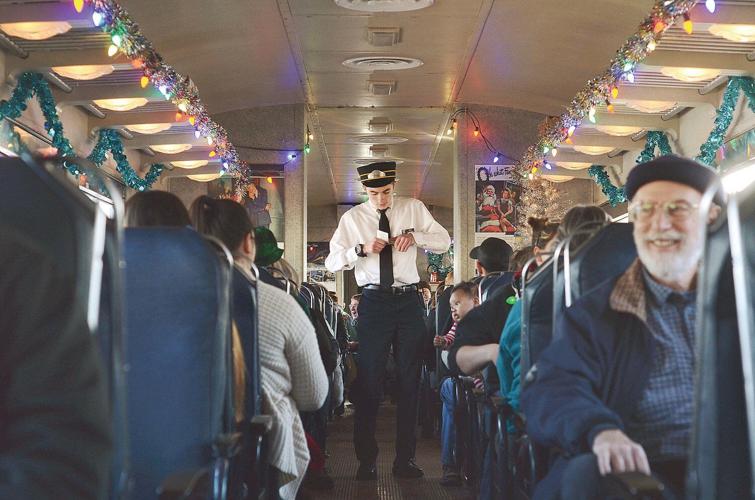 Coach attendant Nick Pandaleon checks tickets on the Tinseliner train as it departs from the Adams station. 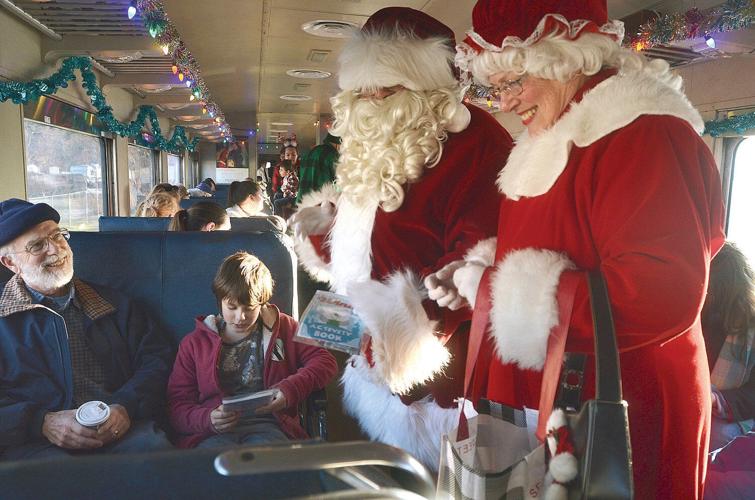 Santa and Mrs. Claus greet passengers on the Tinseliner train on Sunday afternoon.

Madison Klipp, 3, of Northbridge, waves goodbye to Santa Claus after he got off the Tinseliner train in Adams. Madison joyfully squealed "Goodbye Santa! Merry Christmas!"

Mrs. Claus greets families before Santa boards the train, as they ride on the Tinseliner out of Adams.

Coach attendant Nick Pandaleon checks tickets on the Tinseliner train as it departs from the Adams station.

Santa and Mrs. Claus greet passengers on the Tinseliner train on Sunday afternoon.

ADAMS — The tiny tots with their eyes all aglow sat patiently in the rail car as they knew Santa was on his way.

The youngsters and their parents — nearly 90 passengers in all — were riding the Tinseliner, the all-volunteer Berkshire Scenic Railway's Christmas train.

Sunday's three round trips from the downtowns of Adams to North Adams was aboard a single Budd Company car — a passenger rail car with its own 1955 diesel engine. The Budd car interior was decorated with tinsel garland, silver tinsel tree, colored lights and filled with Christmas music.

Santa Claus hopped aboard in North Adams, joining Mrs. Claus, greeting children of all ages and handing out small gifts to the youngest ones.

Conductor Bob Dupont has been a scenic railway volunteer from its beginning more than 30 years ago. "The young kids coming on board to see Santa, that's pay enough for me," he said.

Several women who boarded the train were shining brightly, wearing flashing Christmas light necklaces, from a party of 14 adults and two children representing the Kolodziejczyk, Tracy, Kemp and Melillo families.

Train enthusiast Jacob Kolodziejczyk, of Cheshire, was enjoying the glittering ride with wife, Sarah, and 17-month-old Odin, who can expect a train set under the tree Christmas morning, according to his father.

"As a kid, I used to love seeing the endless trains that looped around," Jacob said.

So who will initially play more with the toy trains?

"Probably me," he told an Eagle reporter along for the ride.

Since Thanksgiving weekend, scenic railway officials say the Tinseliner has been a virtual sellout of its three runs on each of three consecutive Saturdays and Sundays, with the last run next weekend already booked up.

"We've had to turn people way for the Tinseliner," said Kevin Chittenden, superintendent of train operations.

Overall, Chittenden says the year will wrap up with 8,836 riders, up 11 percent from the 7,855 in 2017. The railway's special events have helped boost ridership, including the Caberet Train runs that debuted last year. Due to strong attendance over the summer, those runs extended beyond the Sept. 29 end date to Nov. 24 and this coming Saturday, dubbed the Mistletoe & Martini train.

The railway has steadily grown in ridership since moving to the North Berkshire tracks three years ago from its home base in Lenox. The tourist attraction was forced off the South Berkshire tracks at the end of the 2011 season, unable to reach an agreement with the Housatonic Railroad Company, then owners of the tracks. Four years later, the Massachusetts Department of Transportation bought the rail line between Pittsfield and the Connecticut border.

Berkshire Scenic Railway resumed operations the weekend before Christmas 2015, with its inaugural holiday train rides that sold out.

Each year, the Tinseliner has enhanced the enjoyment level, this year introducing Mrs. Claus. In 2016, the railway added a 20-minute stop in North Adams allowing passengers to disembark and enjoy hot chocolate, roast marshmallows to make s'mores and buy a real Christmas tree they can pick up later, all to help fight cancer.

The tree sales benefits PopCares Inc., a nonprofit charity that supports cancer survivors and their families with financial assistance beyond medical costs. It also helps them maintain their homes, yards and vehicles and small acts of kindness through cards and flowers, according to the charity's brochure.

Volunteer Pam Wilk says the fundraiser brings out the generosity in people, some often paying more than the price of the tree.

"It kind of takes your breath away, especially when you're helping someone," she said.