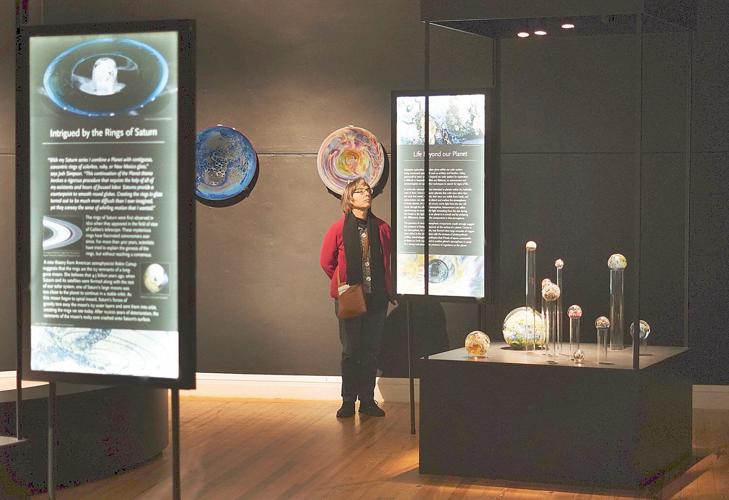 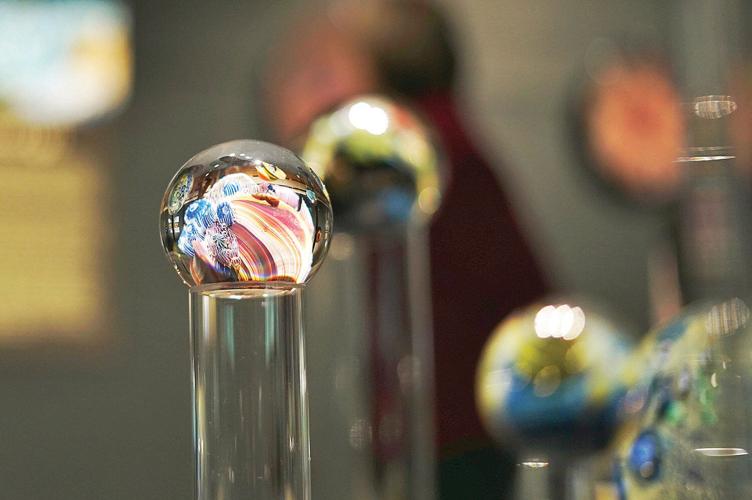 Worlds of glass are on display in the Josh Simpson exhibit "Galactic Landscapes" at Berkshire Museum. 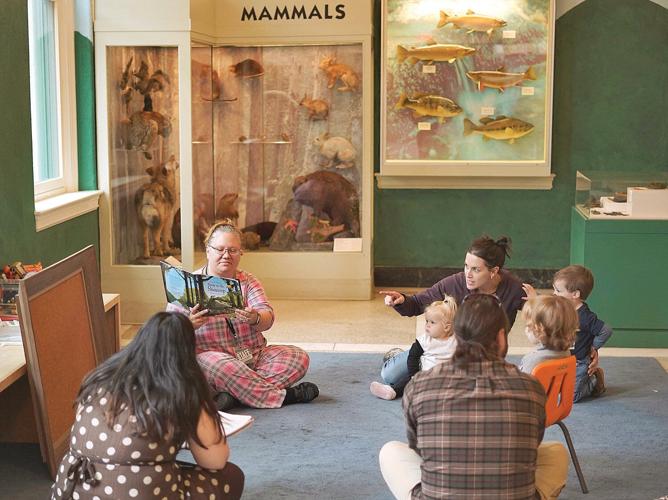 Children and parents enjoy studying a nature book in the Berkshire Backyard permanent exhibit at Berkshire Museum. The reading is part of the WeeMuse Adventure program every Friday.

Worlds of glass are on display in the Josh Simpson exhibit "Galactic Landscapes" at Berkshire Museum.

Children and parents enjoy studying a nature book in the Berkshire Backyard permanent exhibit at Berkshire Museum. The reading is part of the WeeMuse Adventure program every Friday.

PITTSFIELD — A two-word phrase that inspired some but alarmed others does not appear in the Berkshire Museum's public pitch for a new executive director.

A 1,300-word job description posted by a recruiter does not refer to a "New Vision," the term museum officials used when they went public 16 months ago with plans to emphasize interdisciplinary exhibits and create a grand new atrium-style lobby.

Most initial public opposition centered on how the New Vision would be financed — through the sale of valuable works of art that continues Friday with the auction of two 19th-century paintings.

Others, though, expressed concern that the proposed atrium would remove historic elements of the museum's 39 South St. building, including the Art Deco-style Crane Room at its heart.

"They are as irreplaceable a part of the museum's endowment as the paintings," Carl Sprague of Stockbridge wrote in a 2017 letter to the editor of The Eagle, referring to the Crane Room and other internal spaces that appeared to be poised for change. "Destroying the past is no way to move the museum into the future."

A museum spokeswoman said late Friday trustees are still talking about building projects. A decision won't be made until after a successor is found for Van Shields, the former executive director who stepped down in June and has since sold his home and moved from Pittsfield.

But with the job listing, the museum appears to signal a retreat from the lobby project. Elements of the "New Vision" that apply to how the museum uses its collection remain very much alive.

The job description does not alert candidates that they would be asked to oversee a renovation of the scale outlined last year, when visitors viewed plans for a lobby. Drawings showed a sunlit two-story space with displays up and down the walls.

In fact, the job notice is specific about smaller building projects on the horizon — none of which hint at changes of the sort Shields described a year ago, when the museum displayed designs for a new two-story lobby.

In the listing, candidates are briefed on the museum's planned shift to interactive programming. The document then ticks off detailed aspects of physical changes, with no mention of the kind of space showcased in July 2017.

Instead, the posting says projects include "a significantly expanded aquarium/living collection experience; open storage experiences to allow for more of the collections to be on view and interpreted; two new theater spaces (one with 360-degree projection capabilities); and two new classroom/community spaces to meet the needs of the museum's dynamic and growing education and programming model."

In another passage, the description refers to a need to "make needed repairs and improvements to the museum building." That stated range of work seems not to embrace a major multimillion-dollar remodeling.

Carol Bosco Baumann, the museum's spokeswoman, said that even ahead of the hiring, the institution "is moving forward on needed maintenance and repairs."

For now, only trustees and museum insiders know whether the atrium depicted in museum promotional materials last year is still on the table.

"Planning and decision-making is ongoing around physical changes that will allow the museum to ever more effectively interpret and present the museum's extraordinary collection to the community," Baumann said in a statement, in response to questions from The Eagle about the status of the atrium project.

Baumann said that when it reviews applications, the museum will look for candidates with experience managing through construction projects.

On its website, the museum continues to use the term "New Vision." A page devoted to that recaps the museum's research and use of community focus groups to set a new course. The word "atrium" does not appear in that text, though the page refers generally to new "exhibition spaces."

"A planetarium, new event and exhibition spaces, and an improved classroom with a wet lab are just some of the amenities planned as part of the New Vision," the page says.

The top "summary" in the job listing does not mention the controversy over sales that made the Pittsfield museum one of the most talked about art institutions over the past year, prompting coverage in news outlets around the world.

It does highlight the financial gains that resulted from art sales. "The Museum is financially secure with a substantial capital budget," the job notice says, "providing the next leader of this 100+ year-old institution an opportunity to expand its relevance, status, and influence."

Deeper in, the posting explains that the museum secured permission, despite court challenges, to raise as much as $55 million by selling up to 40 works of art. The last two of 22 works identified for sale go on the block at noon Friday at Sotheby's in New York City.

Candidates are advised, in the posting, that trustees acted to resolve money problems. Plans call for $40 million in proceeds to be added to the museum's endowment, with earnings able to plug a recurring annual deficit of more than $1 million.

"The Museum faced immediate financial challenges, including the need to create an endowment to ensure long-term financial stability and to improve and repair an aging facility in need of modernization both for public safety and for the protection of the museum's collection," the job description says. "The Board made the difficult decision to sell a limited number of artworks ."

The listing makes plain that the museum needs a dynamic leader. It says the institution is part of "a broad and diverse community constantly confronting change and challenge."

No salary is listed. Shields earned $138,571 as executive director in 2017, according to the museum's IRS filing for that year.

Trustees say they are looking for someone able to spearhead the shift to an interdisciplinary interpretation of objects in the museum's collections, which extend from art to history and natural science.

What's needed, the listing says, are "experiences that are fresh and relevant in a changing world."

Going in, the museum wants its next director to take charge not only of internal operations but its relations with the community, governments, foundations and the media. The person hired will handle capital projects and fundraising, plus a long list of other objectives.

On its website, the museum says that a capital campaign is to be relaunched this fall. At the time of the sale announcement, the museum pushed ahead with a $10 million capital campaign, saying it had already notched a $2.5 million gift from the Feigenbaum Foundation. That drive was later sidelined.

Among many bulleted goals on the job listing, the next director will be asked to "ensure that the public use of the Museum and its resources continue to grow."

One of the most challenging requests may be to repair the museum's relations with its peers. Trade groups have criticized the art sales and the museum withdrew from a relationship with the Smithsonian Institution.

Still, the new leader will be asked, according to the listing, to "serve as the public face and spokesperson of the organization, clearly articulating the Museum's mission and activities; fostering and maintaining a close working relationship with regional and national museums and other related institutions."

Applications are due by Nov. 21. The search is being handled by the firm Brent D. Glass LLC of Washington, D.C.