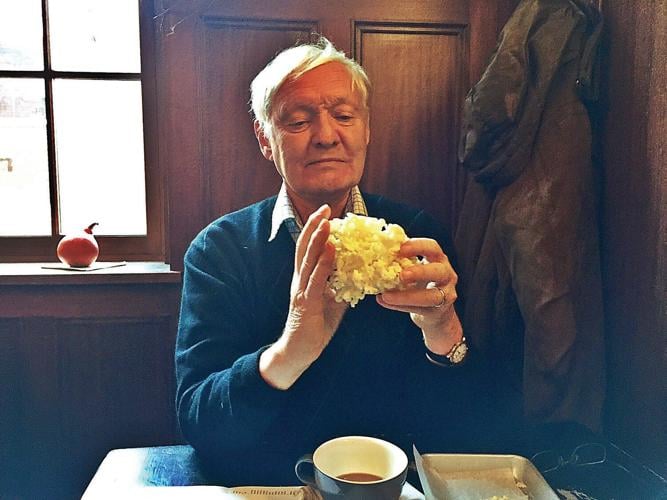 Biophysicist Joachim Frank holds a three-dimensional replica of a near-atomic resolution of a biomolecule. Frank was one of three winners of the 2017 Nobel Prize in chemistry, for their work advancing the science of detailing the shapes and mechanics of previously hard-to-see molecules. 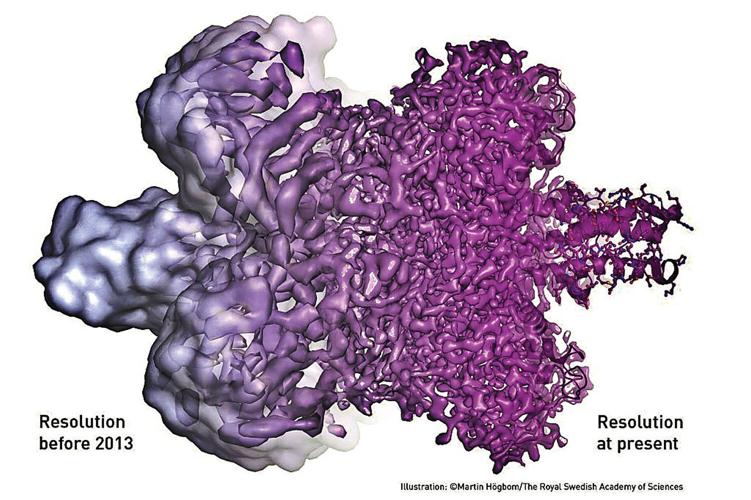 The level of resolution made possible by cryo-electron microscopy.

Biophysicist Joachim Frank holds a three-dimensional replica of a near-atomic resolution of a biomolecule. Frank was one of three winners of the 2017 Nobel Prize in chemistry, for their work advancing the science of detailing the shapes and mechanics of previously hard-to-see molecules.

The level of resolution made possible by cryo-electron microscopy.

GREAT BARRINGTON — It was on a drive into Vermont, passing through its forests, that Joachim Frank saw deep into nature, and felt the essence of his life's work.

"All the sudden it occurred to me that in every single cell, leaf and tree the ribosomes are rotating," he said. "It was a mind-boggling experience."

The reporter's mind is stretching, too, sitting with this biophysicist at Rubi's Cafe. Next to his coffee and a scone sits a three-dimensional, near-atomic-detail model of a ribosome.

Frank said this printed model of the cellular protein factory is as close as he could get — if the model were precisely defined, it would disintegrate.

The part-time Alford resident holds it, explaining how this three-dimensional imagery has revealed that a ribosome's sub-units rotate relative to each other like a ratchet for each amino acid added to a protein.

"That had never been seen before, and nobody knew about this," said the Colombia University professor.

Now, we do, in part because of Frank and two other 2017 Nobel Prize in chemistry winners who developed new ways of seeing deep into the machinery of life using electron microscopes, and recording the images.

Frank, along with Richard Henderson of Cambridge University in Britain and Jacques Dubochet of the University of Lausanne in Switzerland, made significant advances that put the field of cryo-electron microscopy on the map.

Henderson found a way to use the electron microscope to see biomolecules in atomic detail. Dubochet discovered a freezing method that preserves the integrity of a molecule while under that microscope's fierce power, even at the low doses used, and does not form ice crystals that distort the pictures.

Frank, working "in a very quiet environment" as a senior research scientist at the Wadsworth Center in Albany, N.Y., found a way to make three-dimensional images from the two-dimensional pictures.

Armed with such imagery, scientists are better able to understand disease in humans and craft drugs that will more precisely hit the mark. The work, for instance, already has helped scientists better understand the Zika virus, which causes birth defects.

"Soon, there are no more secrets," said a biochemist who chaired the Nobel committee that awarded the chemistry prize.

Sara Snogerup Linse, who teaches at Lund University in Sweden, told The New York Times that these advances portend the end of guessing about the design of our deepest biological matter.

The German-born Frank, 77, has been at this since about 1975, when recording mediums to define molecular structures weren't what they are now.

"The entire potential of the techniques had been there for decades," he said. "In terms of resolution, we hit a wall."

A breakthrough came in 2012 with electronic cameras.

But none of it could have been done without the scientist's tenacity. There was some dogma in his community early on, Frank said, about how the molecular structures had to be perceived.

Frank wanted to allow the structures to be by themselves, seen alone in their natural and random way, and to find their orientations later using mathematical techniques. The earlier way had been to first force them into ordered configurations — that was the prevailing thinking from X-ray crystallography, the earlier method of structure research that has detailed more than 100,000 molecular structures by now, he said.

"No one thought this would be feasible — they sort of laughed about this, because you have to relate the images of the molecules with each other. What does this structure even mean if you get it from a single molecule."

In 1981, Frank said he knew that classifying the molecular shapes was crucial to advancing the work.

"If you have a single molecule, you can make the assumption that they are all the same structure — but what if not?"

A student from Holland wanted to work with him on the problem, and came to the Wadsworth Center bearing images of hemocyanins, molecules that carry oxygen in the blood of invertebrates like mollusks, worms and crabs.

They both started writing computer programs to classify them but found sorting them a challenge, particularly in the computer lab of yore, where scientists doing different things were thrown together with glacial equipment.

"The computers were slow and small, but the machines were enormous, all in one room, with giant, thunderous printers," he said.

Those were the days of overprinting characters to visualize an image stored in the computer. So when Frank saw a nearby scientist looking at printouts showing clusters of blood sample measurements, with patients identified by numbers, he saw that the patients could be images, and the measurements could be pixels. That blew the field right open.

"It took us a single afternoon to present the hemocyanin images to the existing program as blood samples," he said. "Once we got this done, we immediately thought, `This is going to revolutionize everything.' But convincing anyone else was hard. We had a hard time publishing this in a journal."

It took a decade for other scientists to accept this method of visualizing molecules. But then it got traction at the Gordon Research Conferences, a forum for scientists to freely exchange and advance ideas. A 3D cryo-electron microscopy conference was added, and Frank eventually became chairman.

"It signifies recognition," he said.

And it was on his way to one of these conferences in Vermont that he passed through forests he would never see the same way again.

Frank said it was around the age of 8 that he started down this road, after an early childhood of listening for the sounds of enemy warplanes during WWII.

"I always experimented as long as I can remember," he said. "I had a big curiosity. I built things and made chemical reactions."

His family's house in Weidenau, a suburb in Siegen, was bombed by allied forces in 1944, when Frank was 4. Firefighters contained the fire, but it burned off the roof and the family had to move to a nearby town, where his father, a judge, had found an apartment in an old castle, where they stayed for a year.

The war years set an anxiety deep in him. Nightmares involving bomb shelters were frequent long after.

"It was in a community bomb shelter, and being there with kids crying and people speaking and somebody mourning and the droning noise of planes, and the people who knew which planes were ours and which were allied, and waiting for the all-clear alarm sound ... it was a terrifying experience."

Then came what he found to be an intolerable distortion of the German language, courtesy of the Nazis.

"There were parts of the language that could no longer be used, because they were abused by the Nazis," he said. "the Nazi time itself really left traces in the language and how people would express themselves. The literature was influenced by it, and I was very sensitive to it."

So he high-tailed it to America on a Harkness Fellowship to do research after finishing graduate work in Munich.

And later, while in Albany, he received a Howard Hughes Medical Institute funding award that, he said, changed his life, because he didn't have to keep reapplying for funding.

A love of writing gripped him. In the 1980s he found that he could express himself in English in a way that was recognized, he said.

He took writing classes from author William Kennedy, pre-fame, at the Albany Public Library, and later at the New York State Writers Institute at SUNY Albany.

Frank's work has been published in literary and travel journals, though much remains unpublished for this biophysics champ.

"I have hundreds of drafts developed from all sorts of things," he said.

He also is a passionate photographer at the nonatomic level, and has shown his work, some of which is on his photography and writing website, Franxfiction.com.

Then there are amusements. Frank developed the Sporknik, a utensil with a fork and knife on each end and a spoon in the middle. Because his son-in-law Tom is a "3-D digital design wizard," he said, it is for sale online. It's 3-D printed in stainless steel.

"A piece of silverware that won't work," Frank said. "For high-performance dining."

The product description says "the effortless transition from soup to salad to steak will have you forever eating with your hands."

These days, Frank works with graduate students at Columbia, and comes to Alford on weekends with his wife, Carol Saginaw, and rescue dog, Daisy, an early morning barker who was famously still asleep when the winning phone call about the prize came from Sweden at 5:18 a.m.

Frank and Saginaw, during their Albany days, were pulled into this cultural force field by Tanglewood and Jacob's Pillow. Now, working in his large garden here "is the most peaceful thing to do."

The garden also likes his touch.

"We had 12-foot-high sunflowers," he said. "The soil must be just right. It's prosperous."