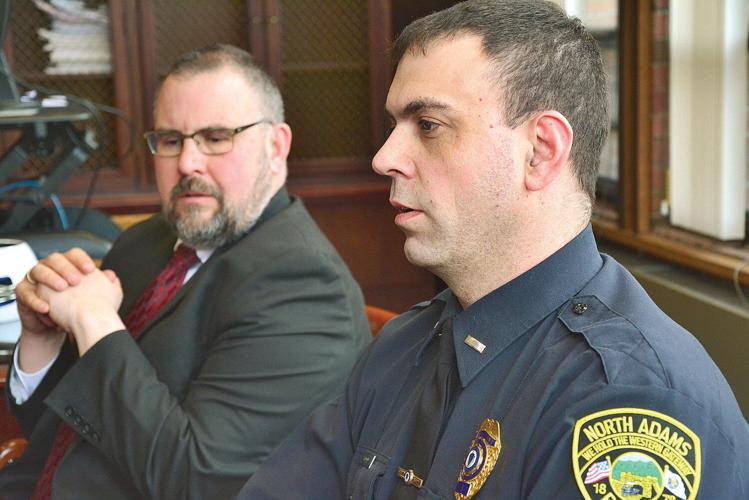 Jason Wood, a lieutenant with the North Adams Police Department, has been selected as the city's new police chief. He will begin his new role May 1. Mayor Thomas Bernard, rear, will look to negotiate a salary with the new chief outside the city's classification and compensation plan. 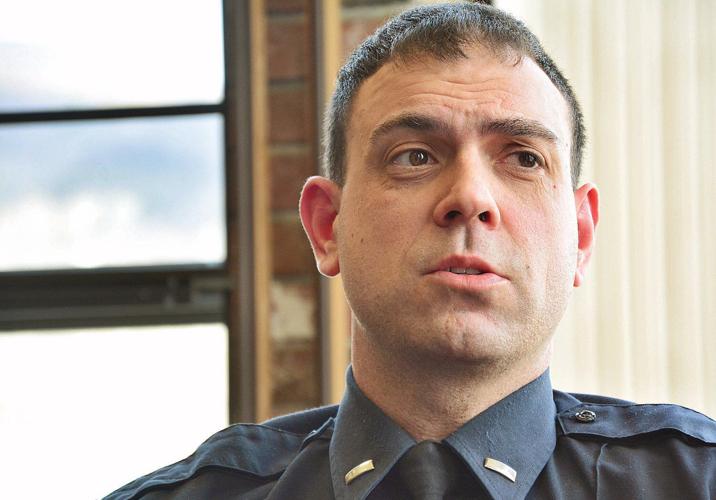 Jason Wood, a lieutenant with the North Adams Police Department, has been selected as the city's new police chief. He will begin his new role May 1.

Jason Wood, a lieutenant with the North Adams Police Department, has been selected as the city's new police chief. He will begin his new role May 1. Mayor Thomas Bernard, rear, will look to negotiate a salary with the new chief outside the city's classification and compensation plan.

Jason Wood, a lieutenant with the North Adams Police Department, has been selected as the city's new police chief. He will begin his new role May 1.

NORTH ADAMS — The Police Department's second in command will take the reins as chief.

"We do a lot of good things, [but] there's definitely some areas we can improve in," said Wood, who made enhancing the department's community presence a cornerstone of his public interviews.

Wood, 42, is a North Adams native who joined the force as a full-time patrol officer in 2003, making his way up the ranks to sergeant in 2014 and then acting lieutenant in 2017. He was permanently appointed to the lieutenant position this year, and will be sworn in as chief May 1, with a public swearing-in ceremony scheduled for May 3.

Wood graduated from Drury High School and has an associate degree in criminal justice from Berkshire Community College.

"Any one of them could have been a credible chief for North Adams," Bernard said, but Wood stood out and offered "the ability to know the community, to understand North Adams" and its unique demographics.

In the coming weeks, Wood will look to reorganize the department's command staff, including selecting a replacement for himself as lieutenant, and lay out an agenda that includes more community meetings with police and interaction with local youths.

"I want to engage the community more," Wood said.

That engagement extends to local agencies and organizations, Bernard added.

"There's going to be a lot of learning that comes with moving into this new leadership role, and one of the things that's going to be a new priority for the chief is strengthening and deepening relationships with groups and organizations in the community, but also agencies," Bernard said, citing the Elizabeth Freeman Center as an example.

Wood's department will explore opening new specialized divisions, such as an accident reconstruction team, he said.

Wood faces a series of challenges as he takes over the department, including an ongoing opioid epidemic and high rates of domestic violence. There are a number of unfilled positions within the department, and the city's crumbling public safety building is not handicap-accessible, with no immediate solution in reach.

The new chief also will continue to guide the department as it transitions out of the Civil Service system in an effort to improve its flexibility when hiring new officers.

Wood will have to combat a stubbornly high rate of reported violent crime. Although city officials maintain that the city is a safe place to visit and live, and that most crime is targeted and contained to a small segment of the population, the crime rate continues to be a persistent concern among residents.

"The reality of it is that North Adams is a busy city and we're faced with our fair share of problems — I'm not going to sugarcoat it," Wood said. "Hopefully, we can start making some headway to ultimately lower those numbers."

In addressing the opioid epidemic, Wood endorsed counseling for addicts but a harsher approach to dealers.

"We're going to have to continue to aggressively go after these people, just as our detective unit is doing right now," Wood said.

Wood won the job despite the other candidates having an edge in terms of education. Terzian and Berger have a master's degree in degree in criminal justice. On Wednesday, Wood suggested that he would look to further his education at some point.Salary negotiations

The city now will enter into negotiations with Wood on a contract. As Bernard already had signaled, he will look to negotiate a salary with the new chief outside the city's classification and compensation plan, under which Cozzaglio earned about $81,000. Under state law, the mayor is allowed to negotiate a salary directly with the chiefs of the fire and police departments, the city's labor attorney advised the mayor and City Council last year.

At a news conference last November, Cozzaglio signaled his plans to retire after a 32-year career with the Police Department. He officially retired in February but agreed to remain on the job on an interim basis while the search for his replacement continued.

On Wednesday, Cozzaglio welcomed Wood's appointment, calling him "the most logical" appointment and a "good officer."

"Jason has been my right-hand man for almost two years now as acting lieutenant and lieutenant, and I've found him to be very capable and competent," Cozzaglio said. "He's well-liked and well-respected."

"I am happy that he was appointed; I believe they made the right choice," said North Adams Fire Chief Stephen Meranti. "The transition will be very smooth, I'm sure."

The appointment is the culmination of a monthslong search process for a new police chief. It began with the formation of a search committee made up of representatives from the community, including the Northern Berkshire Community Coalition, Massachusetts College of Liberal Arts and the city's police officers union.

Though the search committee had input throughout the process, the appointment ultimately was Bernard's to make.

Amber Besaw, executive director of the Northern Berkshire Community Coalition and a member of the search committee, lauded Bernard for involving the community in the search process because the next police chief will be "an integral part of our community."

Wood, specifically, offers a "nice familiarity with the community," she added.

"One of the things the search committee saw, and I think the mayor saw, is his desire to take our Police Department and our city to an even better place than it already is, his commitment to doing the work as well as it can be done, and to be in partnership with those who are doing the work in other ways in the community," Besaw said.

City Councilor Jason LaForest, who was a member of the search committee, said Wood demonstrated a willingness to work with the District Attorney's Office and local agencies to combat crime and address social justice issues.

"Although there were candidates from across the country, Chief Wood showed the most knowledge of the unique problems facing North Adams and the Berkshire County community. He showed a willingness to continue effective community policing practices that have exemplified his career within the department," LaForest said.

"We're here today at the end of a process that I'm really proud of because of the level of support that I had in it," Bernard said. "The search committee succeeded beyond my wildest expectations."

The committee reviewed 40 applications for the job, which drew a broad range of candidates, Bernard said.

Eight candidates then were chosen for phone interviews with the search committee, which selected three finalists.

The finalists visited North Adams and underwent separate interviews in which they fielded questions from the public in a series of meetings last month.