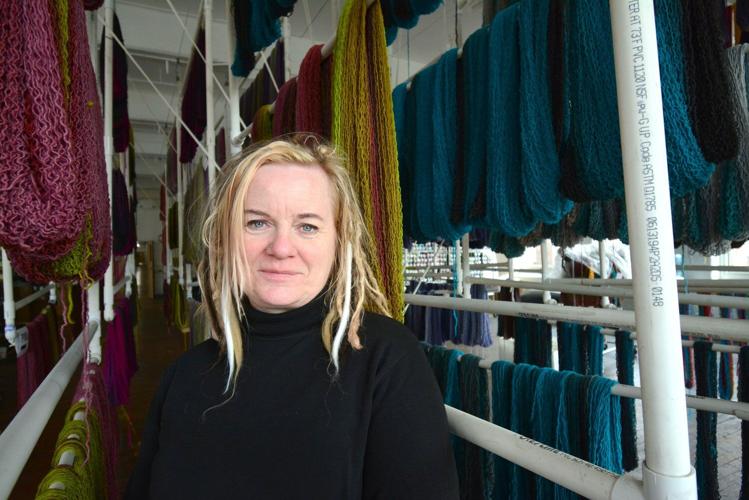 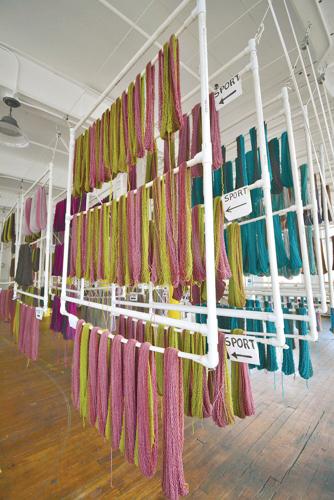 Tina Whtimore first developed the design for her hanging drying racks in her Oakland, Calif. studio. The racks now line her 4,000-square-foot studio in the Norad Mill in North Adams. 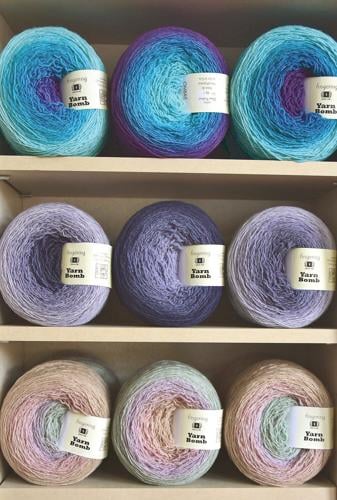 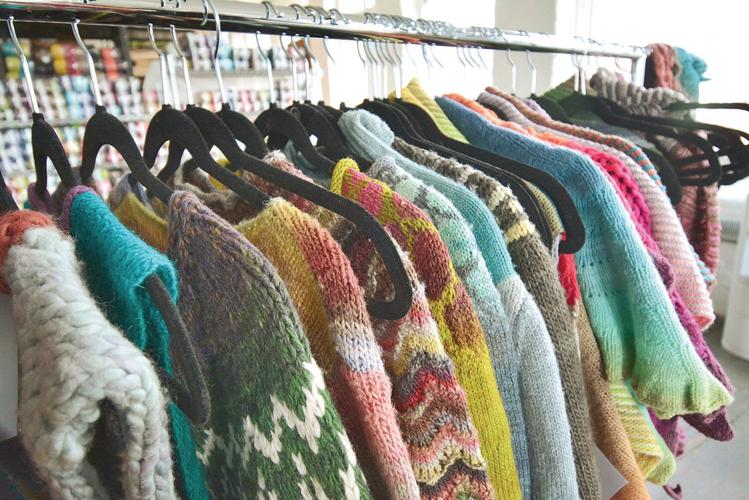 Examples of clothing knit with various yarns from the Freia Fine Handpaints line produced by Freia Fibers at the Norad Mill in North Adams. 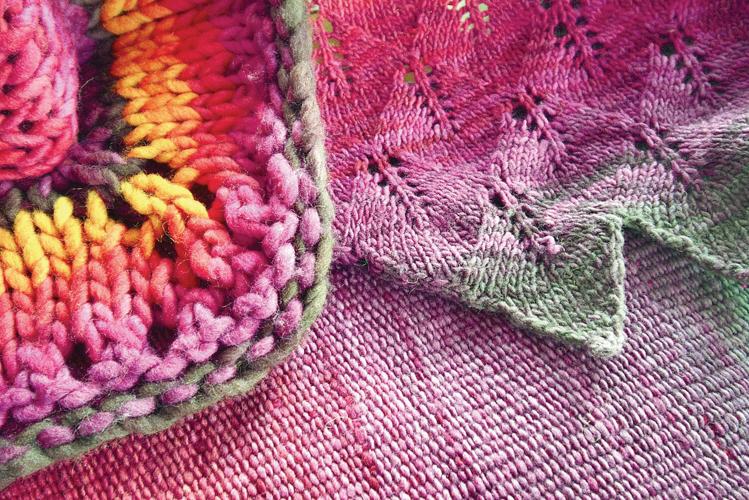 Freia Fibers produces its gradient yarns in a variety of weights. Seen here are three projects, all made in the same color gradient, but with differing yarn weights. 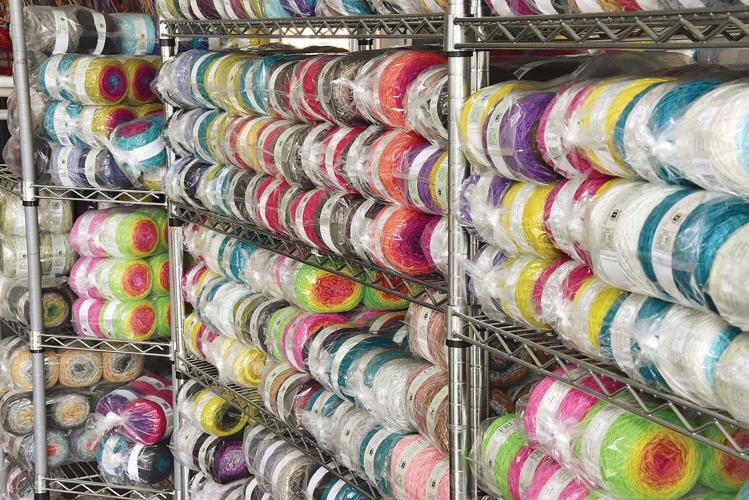 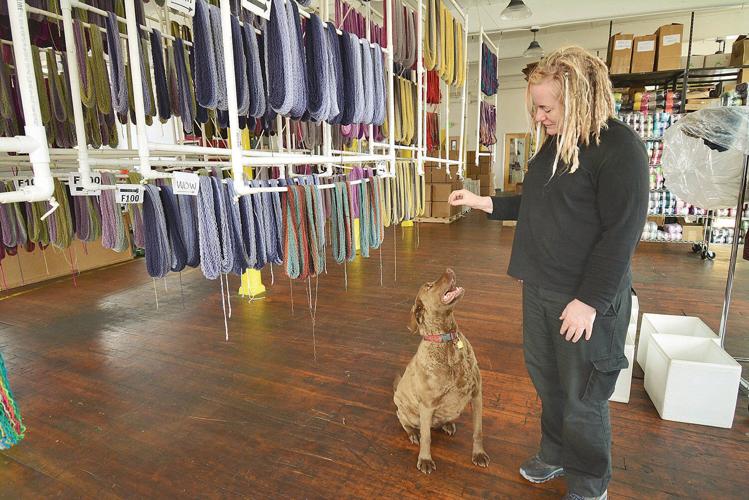 Tina Whtimore first developed the design for her hanging drying racks in her Oakland, Calif. studio. The racks now line her 4,000-square-foot studio in the Norad Mill in North Adams.

Examples of clothing knit with various yarns from the Freia Fine Handpaints line produced by Freia Fibers at the Norad Mill in North Adams.

Freia Fibers produces its gradient yarns in a variety of weights. Seen here are three projects, all made in the same color gradient, but with differing yarn weights.

NORTH ADAMS — Color. It's the first thing you see when entering the Freia Fibers studio, where yarn, in every hue of the rainbow, seemingly floats midair.

The studio is the central hub of production for Freia Fine Handpaints, a line of hand-dyed gradient and ombre yarns developed by owner Tina Whitmore.

"When I started doing this in 2010, I was the only one doing this," Whitmore said during a recent interview at her Norad Mill studio.

Since then, other small producers making gradient and ombre color yarns have entered the market.

"The people who do what I do, usually only do it in two [yarn] weights. We make ours in every weight, from lace to super bulky. And still, no one else makes it in the super bulky weight," she said. "I had to invent the equipment I use to do that."

"I started, in 2003, with a company, Knitwhits, a knitting kit company. I bought yarn from manufacturers. I broke down the yarn into kits with patterns," she said.

In 2010, during a lull in the industry, Whitmore learned how to dye yarn. Not satisfied with the self-striping yarns on the market, she began developing a process that would allow the colors of her knit pieces to flow from one into another without a striping effect.

"I knew what I wanted to knit with," she said. "I took my yarns to the wholesale market because I already had the connections. People just responded like crazy."

The process of dying the wool (Merino, Rambouillet, Corriedale and Columbia) yarn is a closely guarded secret, so we can't tell you how Whitmore creates the yarns like "Dahlia," which transitions between colors of marigold, deep yellow, peach and soft red, or "South Beach," which includes pumpkin, apricot, blue patina, mist and elephant among its colors.

"Most of what we do is proprietary," she said. "All the yarn is dyed table-top. It's not thrown in a pot and dyed. We have eight to 10 colors in a single count of yarn. There's always a lot."

Mixing colors can take up to an hour, she said. From there the yarn is dyed and then cooked overnight in proofing ovens designed for bread. The next morning, the yarn is rinsed and hung to dry on a hanging rack system Whitmore designed herself. The design, developed in California, allowed for her two Chesapeake Bay Retrievers, Freia and Cody, to scooch underneath without disturbing the yarn.

"In California, I had 20-foot high ceilings," she said. " I had to find a space with high enough ceilings."

Once the yarns are dry, Whitmore and her three employees wind them into "cakes" and "yarn bombs," as opposed to traditional balls and twists. Whitmore said this technique presents the gradient and ombre colors in much more visible ways.

Although her 4,000-square-foot studio on the Norad Mill's second floor is not open to the public (a small, once-a-month storefront may happen in the future), the colorful hand-dyed yarns can be purchased in the building, at The Spin-off Yarn Shop, on the third floor and at WEBS in Northampton. The yarns, which range in price from $11 to $74, depending on yarn weight, type and color, also are available at local events and in limited amounts on FreiaFibers.com, which includes a list of shops and national retailers who carry the yarns. The site also offers patterns and shawl kits for sale.

Finding the right space, with high enough ceilings was important to Whitmore, who moved her business from Oakland, Calif., to the Berkshires, last year.

She first visited the region in 2017, after a friend from Oakland purchased a home in Hancock.

"I had to find a home and a business space," she said. With the help of a local realtor, she viewed homes and potential business spaces online and when visiting the area. The process took two years, but she eventually purchased a house in Pittsfield.

The drive from Pittsfield to North Adams and back is a big change of pace for Whitmore, who until moving last year, had a daily commute in the San Francisco Bay Area.

"I have this incredible drive both ways. I think there's two or three traffic lights the whole way. It's mellow. I've found it really useful. I've been listening to a lot of audio books and I'm learning Swedish," Whitmore said. "My family is from Sweden and I never learned. I thought I should do this. Being in the car is perfect, you're captive. My mom attests to the fact that I've actually gotten pretty good at it."

The scenic drive is only one of the benefits of moving her business cross-country.

"As a yarn business, the margins are tight," she said. "Certain costs are so much less in Massachusetts than in California. One of those things is workers compensation insurance [costs]. My costs went from $20,000 [a year] to $3,000 a year. That's huge. I felt like I was earning to pay other people."

Whitmore arrived in the Berkshires on March 24, 2018, after a nine-day cross-country trek that followed the track of a snowstorm that formed in the Rocky Mountains, closing mountain passes and making roads impassable along her driving route.

"We were chasing the storm," she said, referring to her traveling companion, Rosie, a 5-year-old Chesapeake Bay Retriever. "It's a year since I made the move. I decided to make the move two years ago, in April 2017."

Whitmore had adopted Rosie, a rescue dog, just days before the trip. Freia, the company namesake, had passed from old age, and Cody, her other Chesapeake, was ill with cancer.

"Cody passed two days before the trip. Rosie was to be his companion," she said, noting that Rosie was picked up on her way out of town. "Rosie and I really bonded on the way here."

They arrived at her house in Pittsfield an hour before the movers arrived, according to posts documenting the trip on her Instagram feed.

From there, Whitmore began establishing her studio in North Adams and immersing herself in the local cultural and social scenes.

"I enjoy having four seasons. I survived winter. I went cross-country skiing. I'm terrible at it, but I love it," she said.

Jennifer Huberdeau can be reached at jhuberdeau@berkshireeagle.com, at @BE_DigitalJen on Twitter and 413-496-6229.