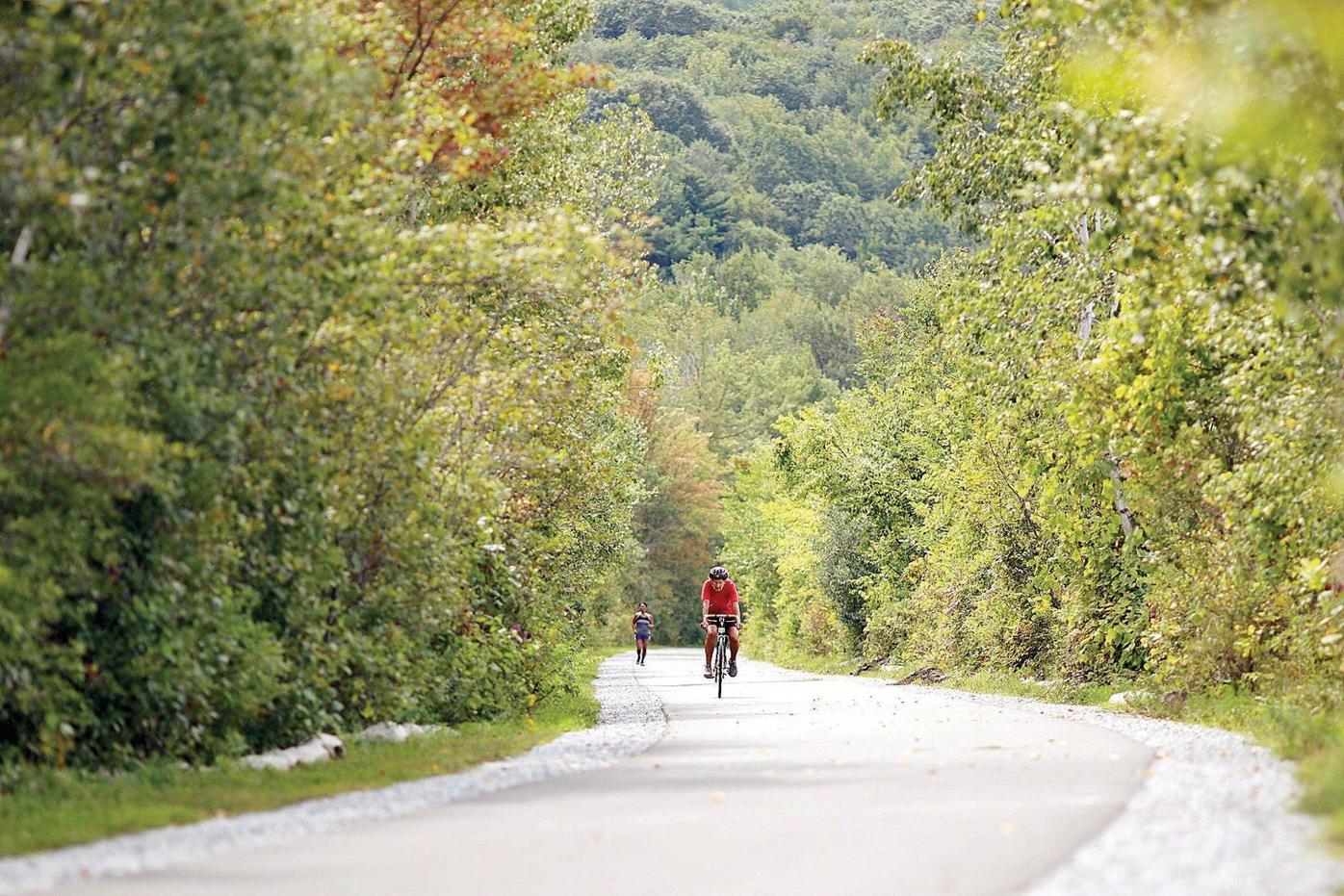 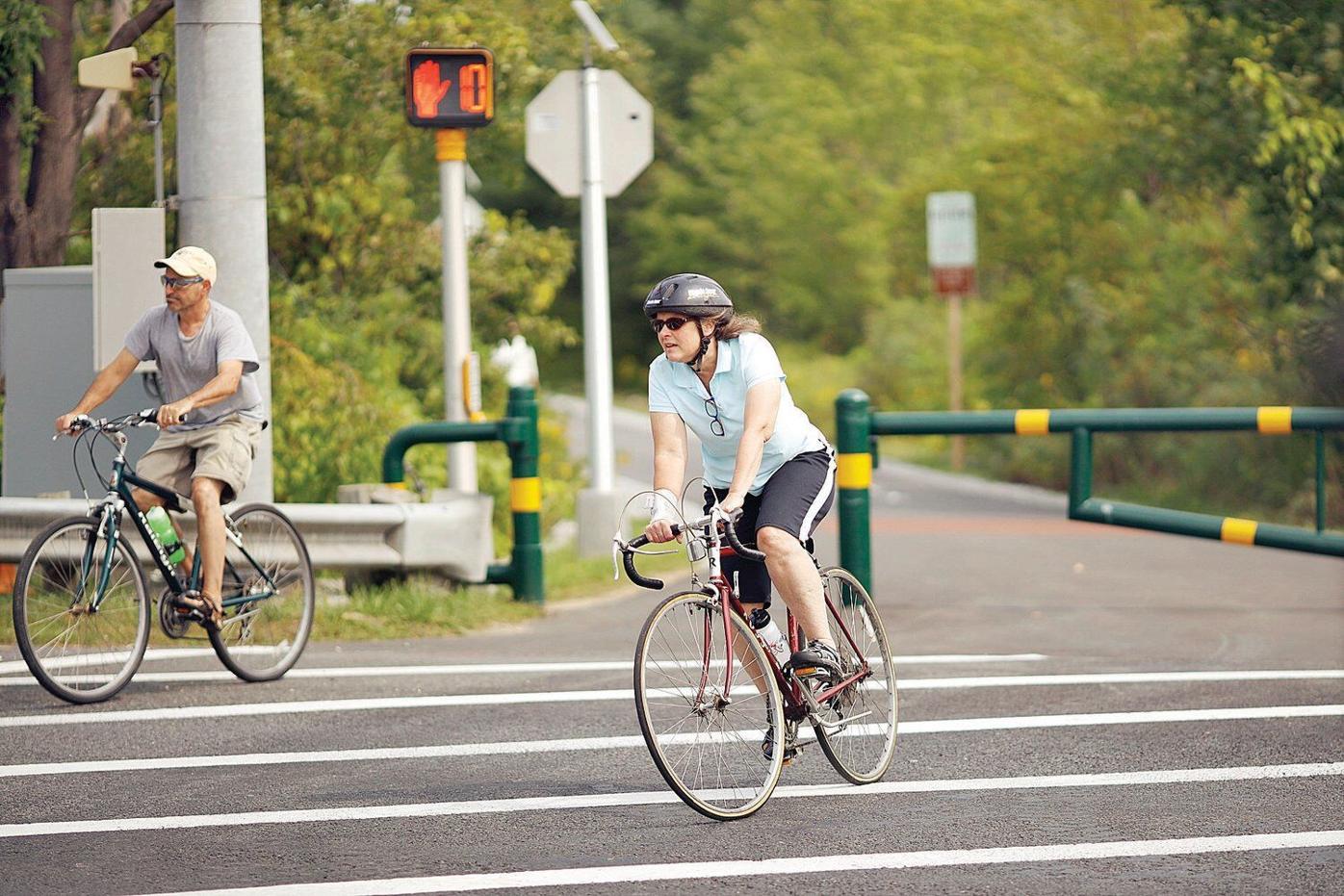 Bicyclists cross the busy Cheshire Road as they ride on the Ashuwillticook Rail Trail in Lanesborough. 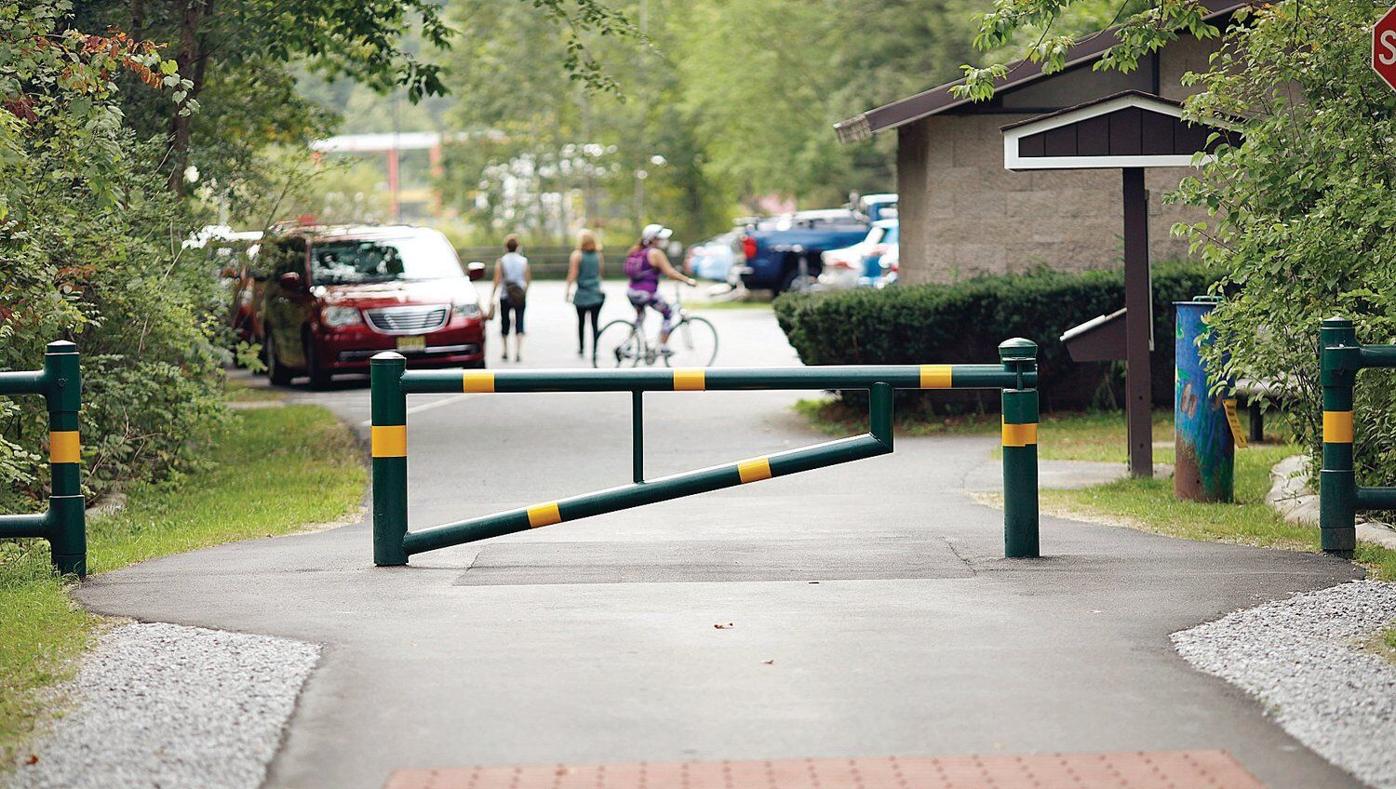 The Ashuwillticook Rail Trail ends in Lanesborough at the entrance to the Berkshire Mall.

Bicyclists cross the busy Cheshire Road as they ride on the Ashuwillticook Rail Trail in Lanesborough.

The Ashuwillticook Rail Trail ends in Lanesborough at the entrance to the Berkshire Mall.

When Marge Cohan started advocating for a countywide bike path 20 years ago, some people thought she was "a crazy woman."

But today, there's even talk of a "Western New England Greenway" connecting from New York to Montreal, running through the Berkshires on an expanded Ashuwillticook Rail Trail. As bike riding continues to grow in popularity among Berkshire residents and visitors alike, the push is part of a growing effort to improve safety as well as access.

"I think you're going to have a whole generation of people who ride, and that's great," said Cohan, president of the Berkshire Bike Path Council. "We want it to be safe, and we want it to be good for other people."

Many roads were built at a time when fewer cyclists used them, and cyclists today often ride on narrow shoulders, separated from high-speed motor vehicles by only a painted line. Most drivers also learned to drive when there hadn't been much consideration for cyclists, but there's hope that the sport's growth can lead to more attention to cycling safety and a change in attitude regarding transportation infrastructure.

Pittsfield, already working on two extensions to the Ashuwillticook, is developing a "master plan" that will identify its most pressing cycling safety needs. Groups like the Berkshire Regional Planning Commission (BRPC) and the Berkshire Bike Path Council are working to get towns across the county to create more bicycle-friendly roads and paths.

"I try to commute on my bicycle every day, so I feel it," Ricardo Morales, Pittsfield's commissioner of public works, said regarding cycling safety. "It's badly needed."

"It's perfectly well suited due to our natural geography, but there is infrastructure that isn't perfectly well suited," said Carrie Holland, Mill Town's managing director, adding that outdoor recreation is "a huge draw for employers to use and a strong driver for attracting new residents."

"That's great for the families," said Eammon Coughlin, senior transportation planner at BRPC. "Kind of younger cyclists who are cautious about cycling on the roadway, it gives them an option to get around."

Beyond that, connecting some of the quieter back roads, particularly in South County, could help, Russo said. While it can be difficult or expensive, widening road shoulders is another option, especially if a physical barrier can be put between the shoulder and the traffic lane.

Through its Complete Streets funding program, the state requires road reconstruction projects that receive funding to include certain levels of cycling and pedestrian safety measures.

Educating drivers is another goal. Galen Mook, executive director of MassBike, said his group is in "constant conversation" with the Registry of Motor Vehicles, and got the RMV to change its manual to instruct drivers to use the "Dutch reach" when exiting a car. Reaching for the door with the hand farther away from it, Mook said, forces a driver to turn and look for oncoming cyclists.

Mook also noted that in both 2018 and 2019, the state Senate passed versions of "An act to reduce traffic fatalities." That bill, a version of which remains with the House Ways and Means Committee, would mandate a safe distance for drivers passing cyclists, require heavy trucks leased by the state to have side guards and implement a standardized crash reporting system.

"People want to come to a place where they can enjoy nature and exercise, and we need to provide that safe space," said state Sen. Adam Hinds, D-Pittsfield.

Regarding the effort for a countywide bike path, Hinds said his current focus was on connecting Williamstown and North Adams, a project that he said would allow families to bike from hotels to popular cultural institutions like the Massachusetts Museum of Contemporary Art and the Clark Art Institute.

"South county needs to be a part of this if we want to get the path through the entire county," he said.

Gradual cultural shifts, some say, will also improve safety as drivers get accustomed to seeing more cyclists on the road. With bike sales booming since the onset of the COVID-19 pandemic, that process may well be underway.

Steffen Root, co-owner of Berkshire Bike & Board, said his store has had its "best summer ever," but worldwide sales growth has made it hard to restock on bikes and service parts.

"This is global — basically everybody is fighting for inventory," he said. "People can't go to their gym or do their normal recreation and exercise, so cycling, hiking and running are the three things kind of left."

E-bikes, which have small motors, have seen a spike in sales and have the potential to help riders overcome physical barriers. Pittsfield, which received a grant last year for a rental system of pedal-assist bikes, is also seeking to expand access.

"What we're trying to achieve with that is to bridge the gap between people that don't necessarily own a bike but would benefit from using one to commute or for using it for a short period of time, and at the same time provide a means of transportation for people people that do not have the ability to just hop on a bike and pedal," Morales said.

To grow the sport, MassBike also encourages local enthusiasts to celebrate "bike month" in September, including its MassCommute Bicycle Challenge from Sept. 19-27.

As e-bikes soar in popularity, a proposed Massachusetts law would clarify how and where they can be used

Legislation concerning electric bicycles, transportation advocates say, can boost safety and ridership for what they say is an affordable and climate-friendly mode of transportation. That legislation might be rolling in the right direction.