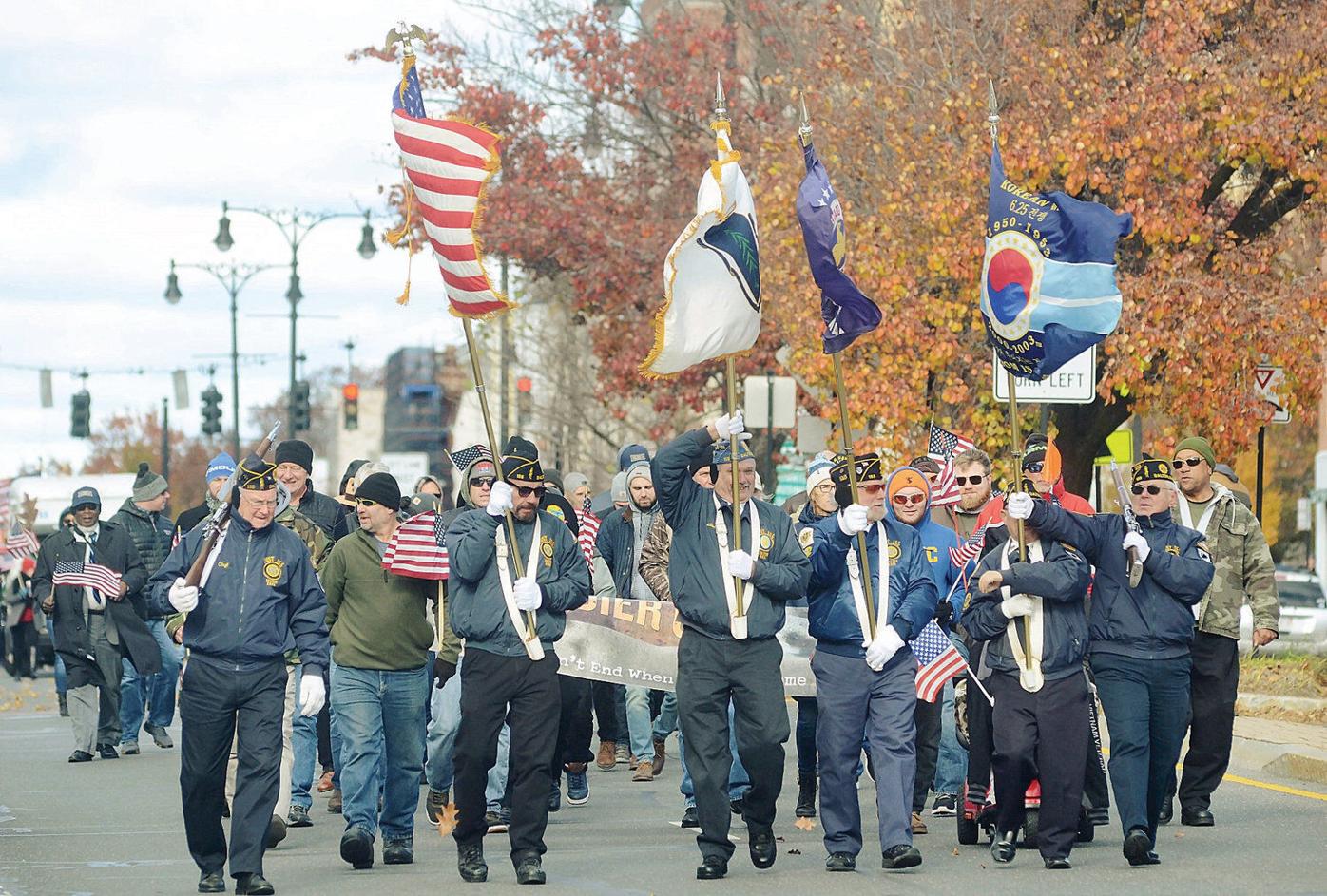 The Veterans Day Parade marches down South Street on the way to Veterans Memorial Park in Pittsfield on Sunday afternoon. 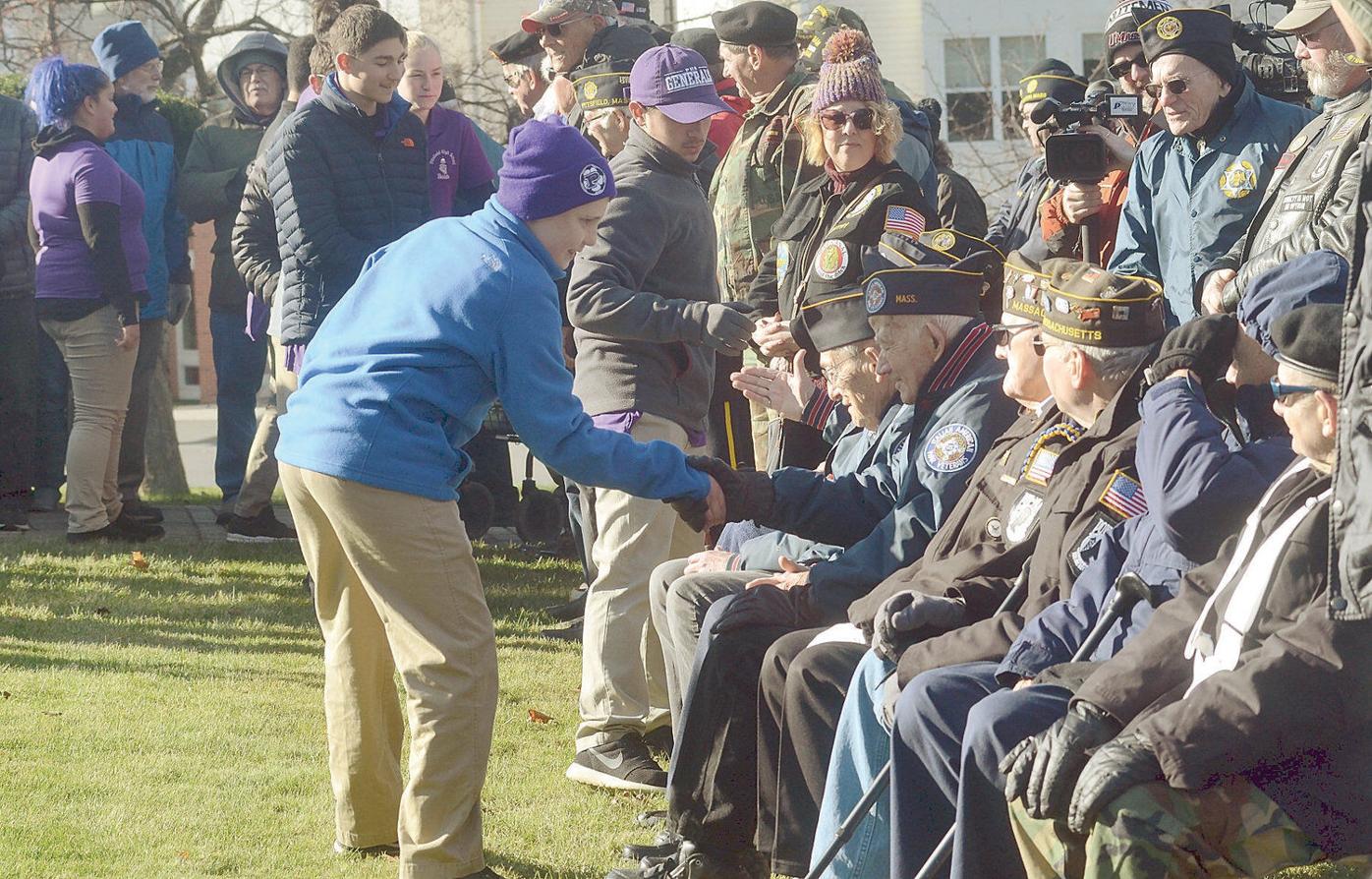 High school students shake the hands of World War II and Korean War veterans, along with all other veterans in attendance during the Veterans Day ceremony held at the Veterans Memorial Park in Pittsfield.

The Veterans Day Parade marches down South Street on the way to Veterans Memorial Park in Pittsfield on Sunday afternoon.

High school students shake the hands of World War II and Korean War veterans, along with all other veterans in attendance during the Veterans Day ceremony held at the Veterans Memorial Park in Pittsfield.

World War I ended nothing.

The first mechanized conflict only proved to be the catalyst for World War II. Then came the Korean War, Vietnam War, the First Gulf War, War in Iraq and the continuing war in Afghanistan.

On Sunday, Pittsfield observed the 100th anniversary of the global conflict's conclusion as part of the city's annual Veterans Day parade and ceremony.

Mayor Linda Tyer read a proclamation honoring those who fought in World War I, which claimed more than 100,000 American soldiers and wounded another 200,000.

"Today is World War I Remembrance Day. I call on all residents to fittingly participate in its remembrance," Tyer told the crowd gathered at Veterans Memorial Park on Veterans Way off South Street. Once a tribute to local residents who fought in World War I, the park's bronze sculpture, over the years, has come to represent all veterans.

The gathering of young and old for the parade and ceremony braved the biting cold and blustery conditions to honor veterans from World War II through the ongoing war against terrorism. One veteran marching by Samson Nhimovitsky along the parade route from City Hall to Memorial Park handed the 4-year-old boy his small American flag.

The youngster began enthusiastically waving the Stars and Stripes, making his mother proud.

"We're here to support the parade and all the veterans," said Sopheap Nhimovitsky.

Later during the ceremony, John Herrera asked all who served in the military to come forward, front and center, and be recognized.

"Just because you didn't fight in a war, you're still a veteran," said Herrera, Pittsfield director of veterans services.

Keynote speaker and Vietnam War veteran Robert "Doc" Rhodes of Pittsfield defined a veteran as someone willing to be in harm's way. He noted less than 1 percent of the American population is a veteran or currently on active duty.

"She or he will do the duty others will do the utmost to avoid," said the retired Marine. "The veteran has met the challenge and paid their debt to society."

For decades, Arnold Perras of Pittsfield has met the challenge of helping veterans on all levels. The former Army sergeant from 1960 to 1963 is the current commander of VFW Post 448 in Pittsfield and been active in the veterans organization for years.

From overseeing military funerals and veterans events to visiting veterans in nursing homes, Perras has served the veteran community well. In recognition of his volunteerism, the Berkshire Coalition of Veterans during Sunday's Veterans Day activities named Perras their Veteran of the Year.

The local realtor was humbled by the award.

"I know there are many others standing here today who have yet to be recognized," he said.

However, for VFW's American Legions and other veterans organizations to survive, new volunteers are needed to carry on the mission of helping future veterans and honoring their service and memory.