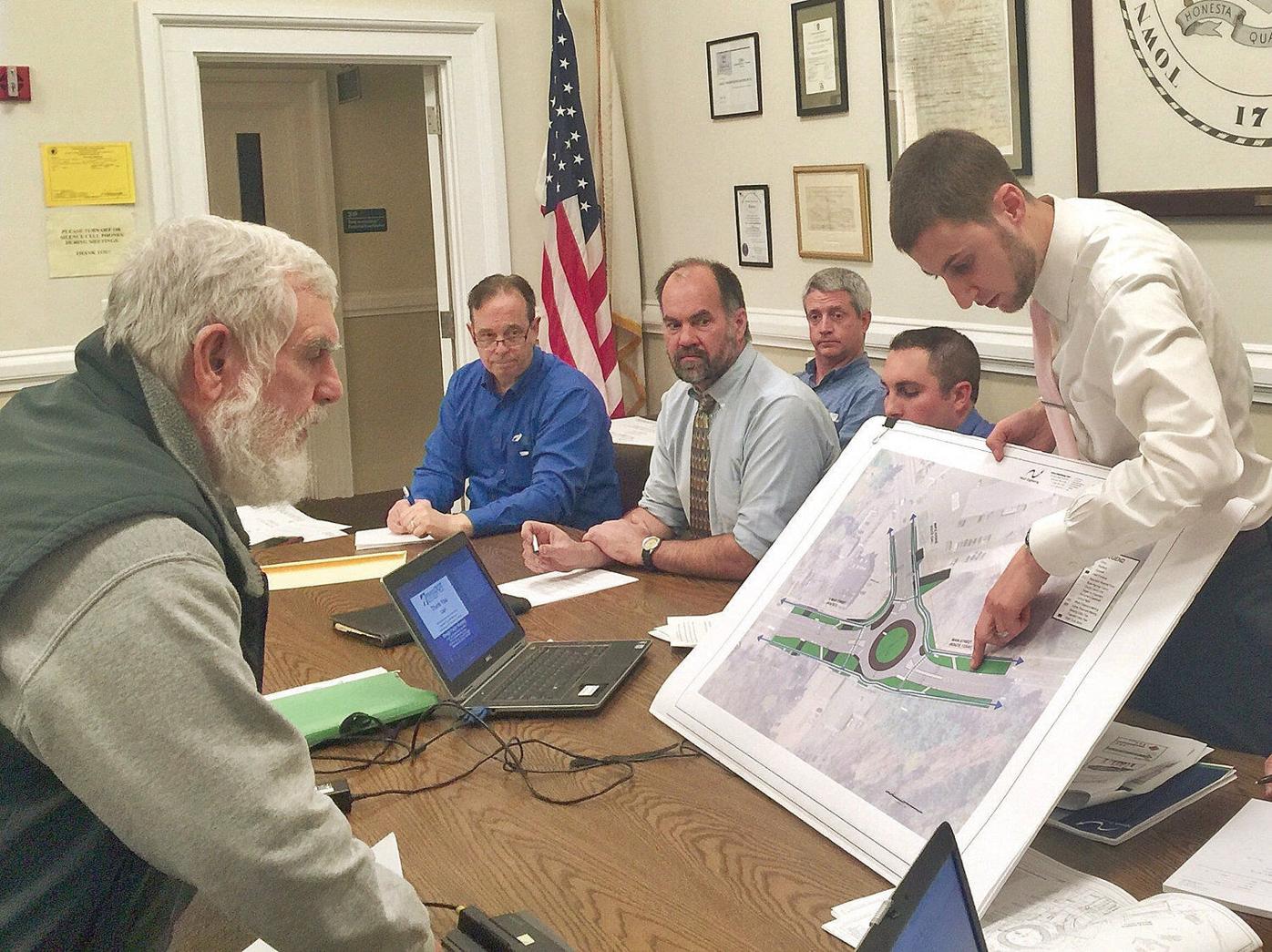 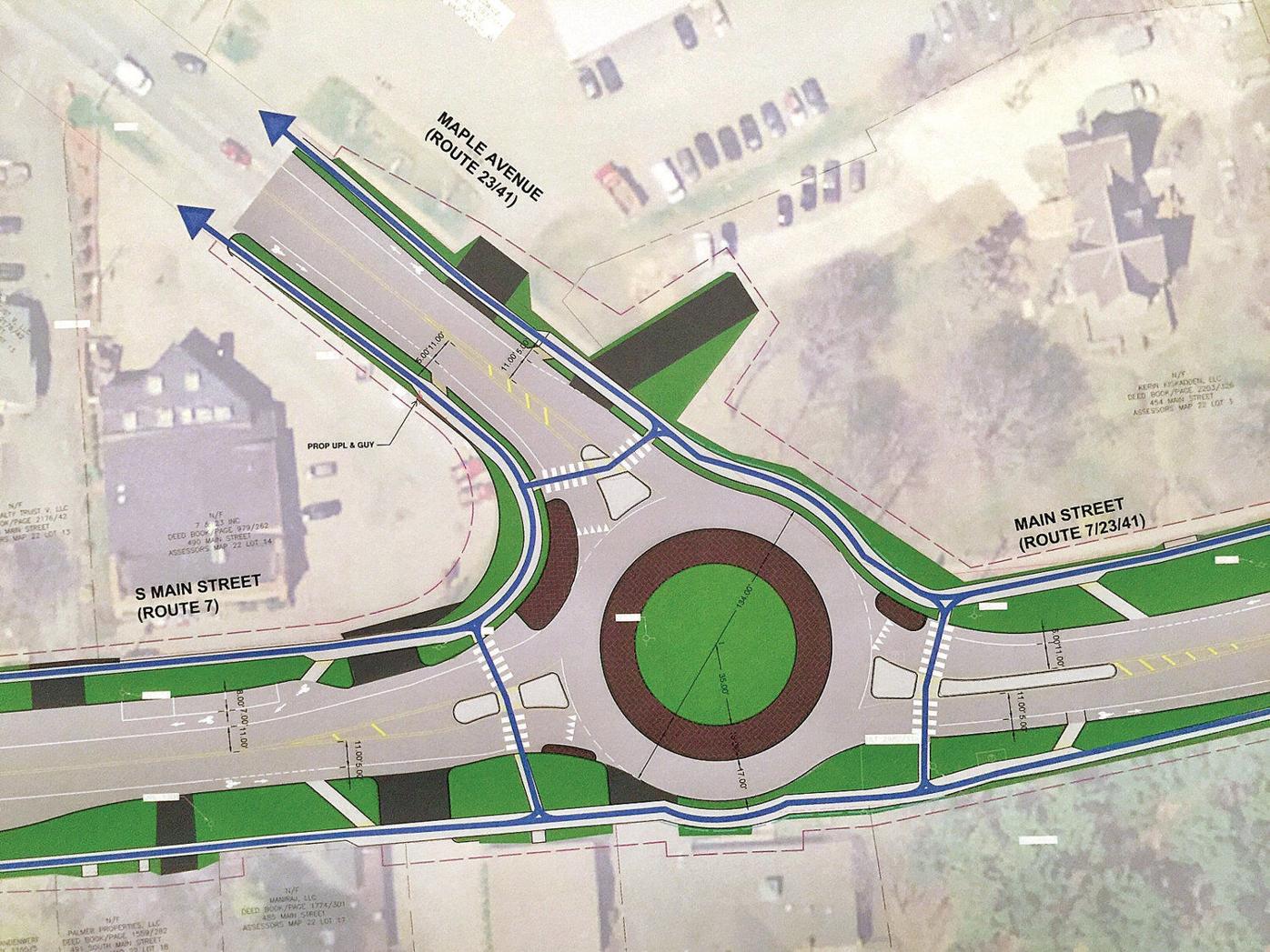 Nitsch Engineering, a design contractor for the state Department of Transportation, presented detailed plans Tuesday for a roundabout in Great Barrington.

Nitsch Engineering, a design contractor for the state Department of Transportation, presented detailed plans Tuesday for a roundabout in Great Barrington.

GREAT BARRINGTON — They were few, but they came armed with many words.

A group of residents turned up at Town Hall on Tuesday night to grill engineers and state Department of Transportation officials about a proposed roundabout for the intersection at Routes 7, 23 and 41, also known as South Main Street and Maple Avenue, south of downtown.

They said they didn't believe their traffic studies, and that the state is trying to fix something that isn't broken.

DOT officials say the roundabout would calm traffic, and organize and improve traffic flow as well as safety for drivers and pedestrians. It also would help police cruisers leave and enter the station more quickly and safely from its Route 7 location at the intersection.

About 25 percent of the design work is complete for the $2 million project, which would begin in early summer 2020 and possibly be finished before winter begins, according to DOT officials.

But it is apparent from the hearing, attended by about 20 people, that the ghosts of road construction projects past are haunting residents and small-business owners in the community.

"People in this town are somewhat suspicious of any road improvements," resident Holly Hamer said, citing the state's recent Main Street reconstruction project that many felt was unnecessarily disruptive to townspeople and downtown businesses. And to some, the modern design diluted the community's downtown charm.

But Mark Moore, a DOT project development engineer, said the agency only did the construction on the Main Street project, which was "town designed and advocated." He also said that the roundabout project could be canceled if the opposition is great.

But in this case, DOT officials think it's a good idea. They cite multiple safety concerns at the intersection that include a higher-than-statewide-rate of crashes — 16 over a three-year period, with three of those involving personal injury.

The project was prompted by a 2015 Road Safety Audit by the agency, one that the town police and fire chiefs had weighed in on.

The police station has a tricky driveway at the intersection, as does a retail building that houses a liquor store and restaurant, said John Michalak of Nitsch Engineering, the design firm for the project. He said pedestrians, especially those who are disabled, are at risk in the current crossings. The entire area would be rebuilt with three crossings with push-activated flashing lights, and likely, raised-surface crosswalks.

Yet, of the 12 area residents who spoke, only one was convinced, with speakers saying the intersection has always worked just fine in every way, and that squeezing two lanes into one at the entrance to the roundabout would likely clog traffic at points beyond it.

Some said the town's significant elderly and tourist populations might struggle to understand the yielding system, creating more danger. Both roads at the intersection bring cars here from Connecticut and New York.

Others simply think it is wasteful to spend so much money digging up the whole area, which also would require the state to buy several permanent easements, when the state could just fix a few things there for much less.

"Spend some money on paint," said Charlie Plungis. "You say the pedestrian lights, the button there doesn't function? Repair it."

Moore said new, safer signals, paint and sidewalk fixes would cost just as much as a roundabout.

But it might cost small-business owners in the area a lot less — they say big construction projects that snarl traffic are killers in an already shaky and seasonal rural economy.

"To have an additional burden at the peak of our season — that really hurts us," said Walter McTeigue, co-owner of the jewelry business McTeigue & McClelland. McTeigue also owns the corner property at the intersection from which the state would have to take an easement if the project moves forward.

"The small businesses that have put up with a lot in the last few years should be fully involved in this discussion," said Thomas McClelland, McTiegue's business partner.

McClelland said the crash rate and an insignificant traffic delay don't warrant such a project, and said more public input is needed "before you move forward one more speck."

There was one lone supporter who said the problem is the DOT's bureaucratic approach to selling a project, even a good one.

"None of these people believe you,"said Bobby Houston. "You have a messaging hurdle here to overcome ... you guys have a big job — be bold."

He said the current Main Street crossings are unsafe, and told officials that the roundabout should have textured pavement for driver awareness and a raised surface for crosswalks.

Moore said crosswalk standards have changed in the past few years.

"There is anticipation that these would be much more visible than what was included in the Main Street project," he said.

Patty Melville wondered if the state would build the roundabout despite the opposition. Apparently not.

"We could just cancel the project," Moore said.

McClelland said that, given the "limited turnout and loose consensus," the studies done by people who do not live in this community and the brewing conflict over the idea, it is reasonable to ask that the project be reconsidered.

Officials said that further comments for final inclusion in the official hearing transcript should be sent to Patricia A. Leavenworth, a MassDOT chief engineer, within 10 days after the hearing.

GREAT BARRINGTON — A state project to build a roundabout south of downtown will take two years to complete.