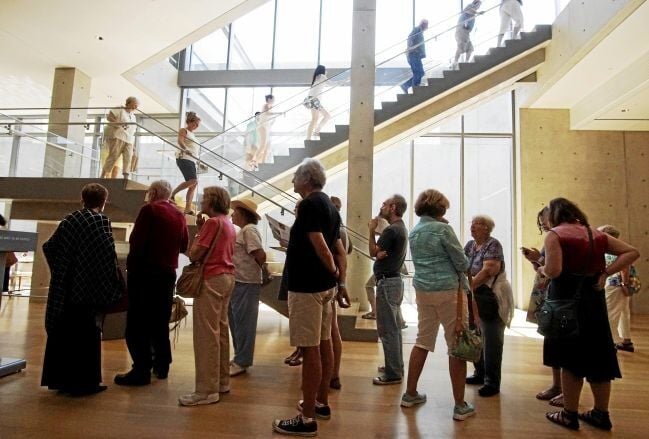 Outgoing Clark director Michael Conforti oversaw a $145 million expansion and renovation of the institute, which is still in progress. 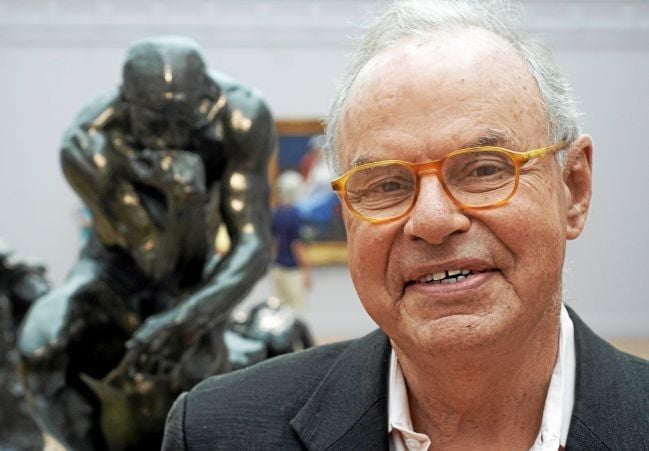 Michael Conforti, shown beside by Rodin's "The Thinker" at the Clark Art Institute, is stepping down Friday after 21 years as director. 'He pushed the staff to broaden their horizons and be more aggressive in putting on great shows,' former board Chairman Peter Willmott said.

Outgoing Clark director Michael Conforti oversaw a $145 million expansion and renovation of the institute, which is still in progress.

Michael Conforti, shown beside by Rodin's "The Thinker" at the Clark Art Institute, is stepping down Friday after 21 years as director. 'He pushed the staff to broaden their horizons and be more aggressive in putting on great shows,' former board Chairman Peter Willmott said.

WILLIAMSTOWN — Michael Conforti retires as director of the Clark Art Institute praised by colleagues for transforming a regional museum for a rich man's art collection into a global visual-studies center whose exhibitions nudge art history into new directions.

In appreciation, trustees, benefactors and staff have donated $6.5 million to have the west pavilion of the new visitor center he saw built named after him.

"This is a fitting tribute to Michael; it ensures continued growth of the rich and vibrant programming that he spearheaded at the Clark," according to a joint statement issued by Andreas Halvorsen and Robert G. Scott, chairman and vice chairman, respectively, of the institute's board of trustees.

Conforti and his wife, Licia, who have two grown children, plan to remain in Williamstown, which, he often quips, has more art scholars per capita than anyplace else. Former trustees chairman Francis Oakley will act as interim director.

Visitors crowding the much-expanded Clark this summer would be surprised at what Conforti saw when he arrived in 1994. Viewers were sparse, exhibitions seldom changed, public activities were minimal. Where sleek terraces and a reflecting pool now frame the landscape, a parking lot stood

Richly endowed with art, money and curatorial know-how, the Clark, which opened in 1955, was an old-guard institution living off its endowment and passively exhibiting its treasures.

Inwardly, however, progressive ideas were simmering. The institute already sponsored a graduate art history program with Williams College and had an outstanding library. Trustees wanted to expand on that by attracting professional art scholars for fellowship studies.

Consultants had been hired and reports compiled, but, as Oakley put it, "Nothing was moving."

"Michael grasped it and made it happen," Oakley said.

Conforti enlisted a former mentor, Henry Millon, head of the Center for Advanced Study of the Visual Arts at the National Gallery in Washington, as a trustee and adviser.

"We knew he'd have experience in organizing symposia and fellowship programs to help us get answers as we got beyond ourselves," he said.

The Clark launched its Research and Academic Program in the late 1990s. Boosted dramatically by a $50 million gift in 2007 from the family foundation of Sir Edwin Manton, an insurance magnate and art collector whose son-in-law was a Williams graduate, it ranks now among the finest in the country.

It offers "programs that no other institute in the nation or, indeed, the world would do," Conforti said in describing it as his most significant accomplishment.

Others were the $145 million building expansion, still underway, and special exhibitions on seldom-explored art topics like "Van Gogh and Nature," now on view.

"He pushed the staff to broaden their horizons and be more aggressive in putting on great shows," said Peter Willmott, who succeeded Oakley as chairman in 2005 and is now retired from the board.

"He had a great knack for attention-getting shows and a penchant for marketing them well," said Mass MoCA Director Joseph Thompson. "He asked a lot and pushed a lot," insisting other museums reciprocate for art loans they got from the Clark, something that was not done before his time.

One of the more memorable was "The Clark Brothers Collect" in 2007. The catalog documented a feud between institute founder Sterling Clark and his brother, Stephen, over inheritance rights and the former's marriage to a French actress with an illegitimate child. Conforti brought descendants of both sides together at the opening.

Oakley, a former president of Williams College; Willmott, a businessman; and Thompson all described Conforti as visionary, energetic and demanding of high quality.

He was an avid collaborator, Thompson said, willingly partnering with other Berkshire cultural organizations to advance the county's arts profile. He made the Clark an early supporter of Mass MoCA, particularly in youth-education programs, and served on its board of trustees.

He was "occasionally infuriating" in protecting the Clark's image, Thompson said. "He'd bring you up short if you monkeyed around with his brand."

His push to achieve his goals could bruise staff egos, and his abrupt dismissal of nearly a dozen employees after the 2008 market meltdown still rankles some locals, although museums elsewhere were doing the same.

Signs that Pritzker Prize-winning architect Tadao Ando, hired in 2001 to redesign the Clark campus, found him a demanding client, seeped out in press conference banter, where Conforti, himself, was invariably charming and articulate, a skill he used expertly with potential donors.

"Michael was very good at introducing the Clark and its vision to people who had not been supporters before," Willmott said. "Our relationship with potential donors was enhanced dramatically."

Among them were Dena and Felda Hardymon of Great Barrington, whose $15 million gift last March was second only to the Manton donation.

While the campus expansion is the most visible of his achievements, Conforti said the 1973 addition, now the Manton Research Center that houses the library, auditorium and Research and Academic Program, was actually more important programmatically to the Clark's core mission as a visual-studies center.

Changes in the project scope, including unexpected building code issues, have delayed the Manton Center's reopening, leaving museum officials unable to put a final figure on the entire undertaking, now tagged at $145 million.

That sum was financed partly out of $150 million raised in gifts, grants and pledges for buildings, new programs and endowed staff positions, including curatorships, and partly through borrowing $76.4 million in three separate bond issues over the past 10 years, museum officials said. The debt — the first the Clark has incurred, according to Oakley — will be repaid out of the operating budget.

Conforti hadn't envisioned himself as a museum director when Clark recruiters approached him in 1993 at the Minneapolis Museum of Art, where he'd been chief curator of sculpture and decorative arts for 14 years. Prior to that, he'd held a similar post for three years at the Fine Arts Museums of San Francisco. His urban museum experience honed his interest in building audience engagement, he said.

The quality of the Clark's collection, the opportunity to launch the academic program and the chance to return to his native New England — he was born in Bradford, Mass., and educated at Trinity College in Hartford, Conn., and at Harvard — helped change his mind.

Looking to the future, Conforti sees a generational change taking place in American museum leadership with "a wonderful new crop [of candidates] ready and eager to take over."

They will come, he said, with imaginative ways to reach audiences through social media, and face big challenges in preserving the cultural assets of places wracked by violence or without deep cultural roots.

A former president of the Association of Museum Directors and a trustee, adviser and member of many international art organizations, Conforti likely will be juggling calls to take on consulting roles.

"He won't be sitting around twiddling his thumbs," Oakley said.

Among Berkshire cultural nonprofits, the Clark Art Institute ranks between Tanglewood and Mass MoCA in economic impact within the county, according to Stephen C. Sheppard, professor of economics at Williams College and director of its Center for Creative Community Development.

The Clark generated $54 million in spending last year supporting some 610 jobs. Of that amount, $41.5 million was through its operating budget and $12.5 million from visitor spending. That compared with $23 million (adjusted for inflation) and 246 jobs two decades ago.

"It has a very major impact," Sheppard said, adding the dollar value of global attention the Clark brings to the region would potentially double those figures.