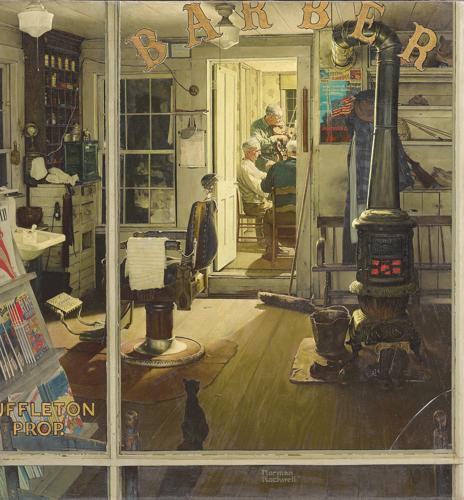 PITTSFIELD — Two paintings by Norman Rockwell put up for auction by the Berkshire Museum go on exhibit Friday in New York City. But whether they can be sold Nov. 13 remains up in the air.

A day after a flurry of legal action, Judge John Agostini continued to deliberate Thursday over motions aimed at halting the sale, as well as an emergency filing from the Attorney General's Office.

It was not clear when the judge's decision would come. At the end of a two-hour hearing Wednesday in Berkshire Superior Court, Agostini said he would rule as soon as he could, citing the importance of the case.

An employee in the court clerk's office told The Eagle that a decision might not come until next week.

The closely-watched case is considered precedent-setting because it might be the largest such deaccession to date in the museum world in which proceeds would be applied in large part to operational expenses, in violation of accepted ethical standards.

The museum says it is under no restriction against selling the art.

Wednesday's hearing brought 10 attorneys to make presentations to Agostini directly or to assist other lawyers doing so.

The courtroom was nearly at capacity.

Darrell Rocha, a spokesman for the Sotheby's auction house, which is poised to sell 19 works from the museum collection, confirmed Thursday that the business sent a representative to monitor the court proceeding.

He also said the Rockwell paintings will still be part of an exhibition opening Friday at the auction house, part of its marketing effort in advance of the Nov. 13 sale. Rockwell's paintings, "Shuffleton's Barbershop" and "Shaftsbury Blacksmith Shop," are joined by seven other works owned by the museum.

In all, 84 pieces from a variety of sellers are included in the house's auction of American art.

Agostini sharply questioned attorneys on both sides of the issue in the hearing Wednesday.

Hours after the hearing ended, the Attorney General's Office filed an emergency motion asking Agostini to allow it to be substituted as a plaintiff if he decided that the original plaintiffs did not have proper standing to bring the action.

The Attorney General's Office said in a brief filed Oct. 31 that it believes sale of the artworks is improper for several reasons.

Agostini spent the first half of the hearing exploring the issue of legal standing, as he considered motions to grant a preliminary injunction stopping the planned sale of 40 works from the museum's collection.

Plaintiffs include three sons of artist Norman Rockwell; Tom Patti, a Pittsfield artist who has sold works to the museum; and seven residents of Berkshire County.

Museum leaders say they acted to sell the works after determining that the 39 South St. facility could close within eight years unless it manages to stabilize its books.

The museum, founded in 1903 by Dalton industrialist Zenas Crane, has been running a roughly million-dollar yearly deficit.

After working with a consultant, museum trustees decided to sell works from their collection and apply the proceeds to a capital project and to expand its endowment to roughly $40 million.